What fun it was to jump on that sleigh and race along frozen white trails with the dogs barking and leaping and straining on the lines. They seemed rather unruly, but when they were given commands, they took off with one goal: to follow the lead pair. There were ten dogs running two by two. We expected Siberian huskies, but they were Alaskan. It was a motley crew, but they were energetic if nothing else. When the sleigh driver yelled, “Ha!” they ran to left. When she yelled, “Gee!” they went to the right. There doesn’t seem to be a lot of thinking going on, just a lot of following impulses and commands. I wouldn’t rank them too very high on the canine IQ scale. They don’t mind if they take a turn a bit sharply and remove a layer of birch bark from a tree with the sleigh. We quickly learned to keep all appendages inside the sleigh. Once they veered off the trail and sank into a rather high bank of snow. It was a bit difficult for them to extricate themselves from that situation. I saw no evidence of any insight as to how they got themselves into that predicament. They probably repeat it all day every day.

When we arrived yesterday at Aurora Husky, the dogs were just chilling. I am not kidding; they actually were chilling. The temperature was probably in the 20s. When they saw the crowd of eager riders, they jumped up, ready to run. They live outdoors, so they are obviously accustomed to the frigid temperatures. (We, on the other hand, nearly froze our noses and toes off.) The dog houses are above ground, apparently to keep them from filling up with snow. I was told that they are warmer off the ground. Check out the picture of a dog named Panikk standing on his house. Is it warmer up there or is the view better? I asked how they ware trained for the job. Apparently, it’s all on-the-job training. They throw the new dogs in with the old and they learn quickly. 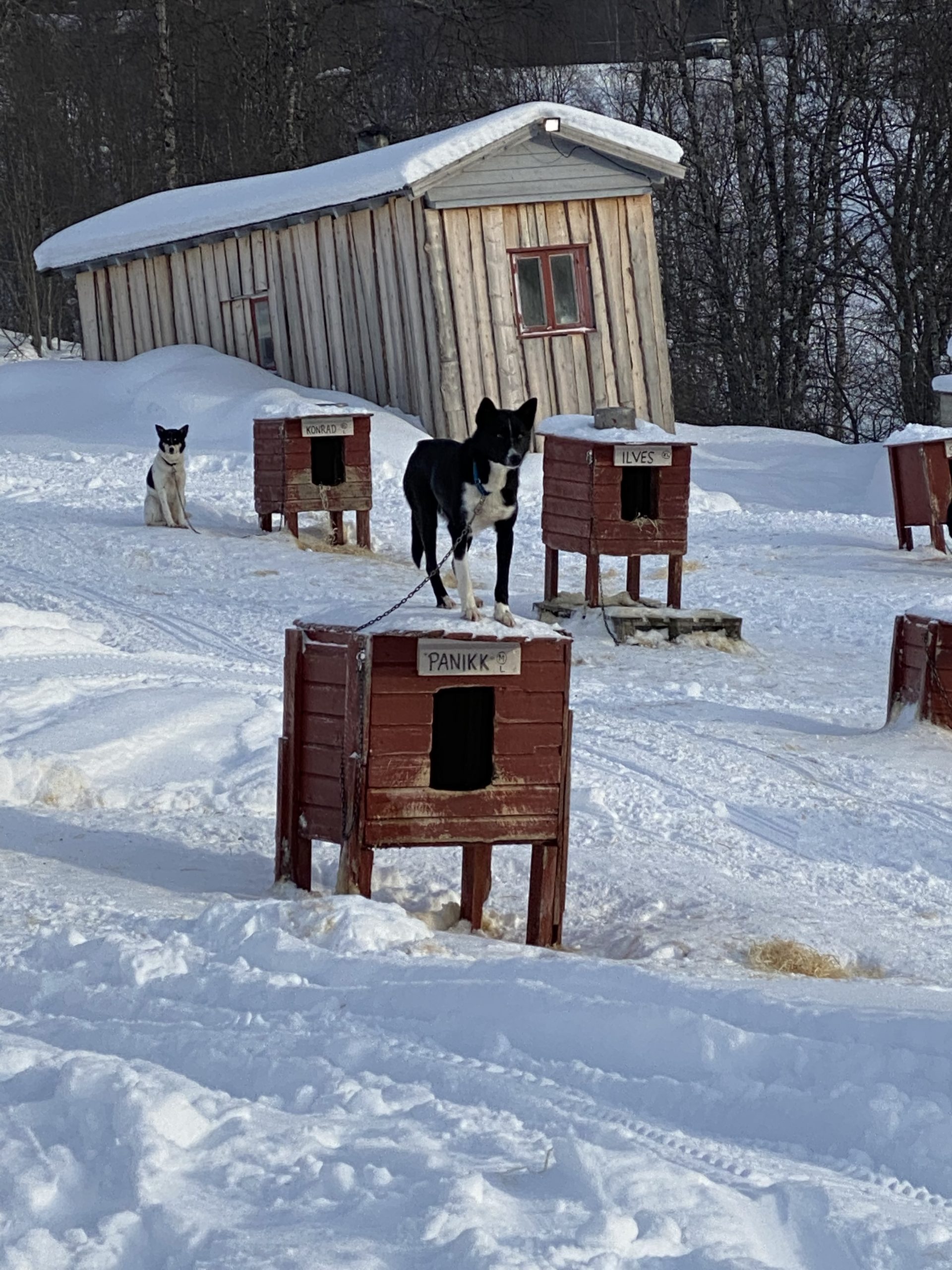 With our ride completed, we headed to the igloo tent to warm up by the wood stove. There we were served a nice hot bowl of reindeer soup. First time for everything! Afterwards, we ventured back out to refreeze our toes by visiting an adorable foursome of twelve week old pups in a pen. Lots of our fellow travelers grabbed a plastic snow saucer and sledded down the hill, but we just tried to stay upright. 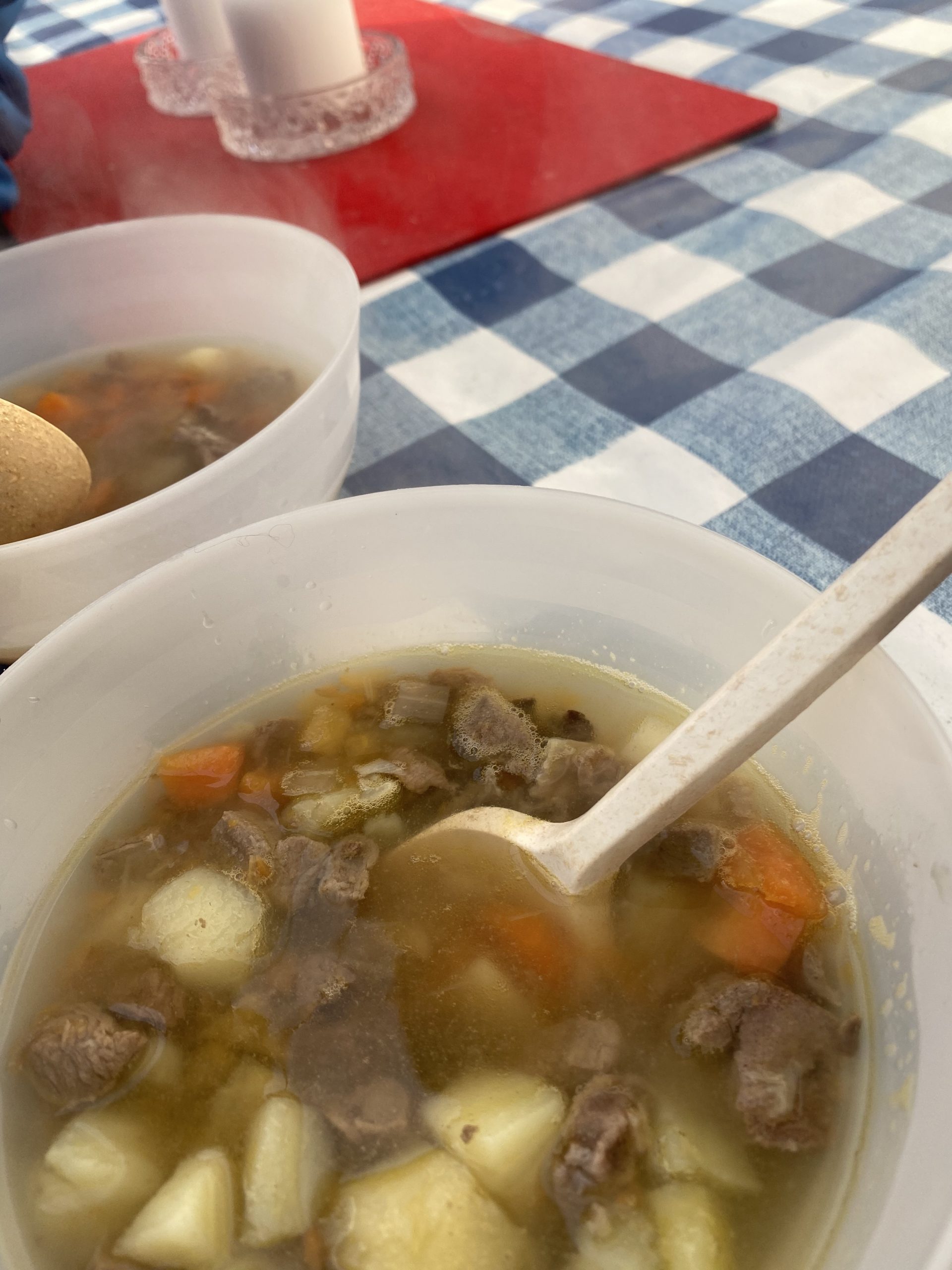 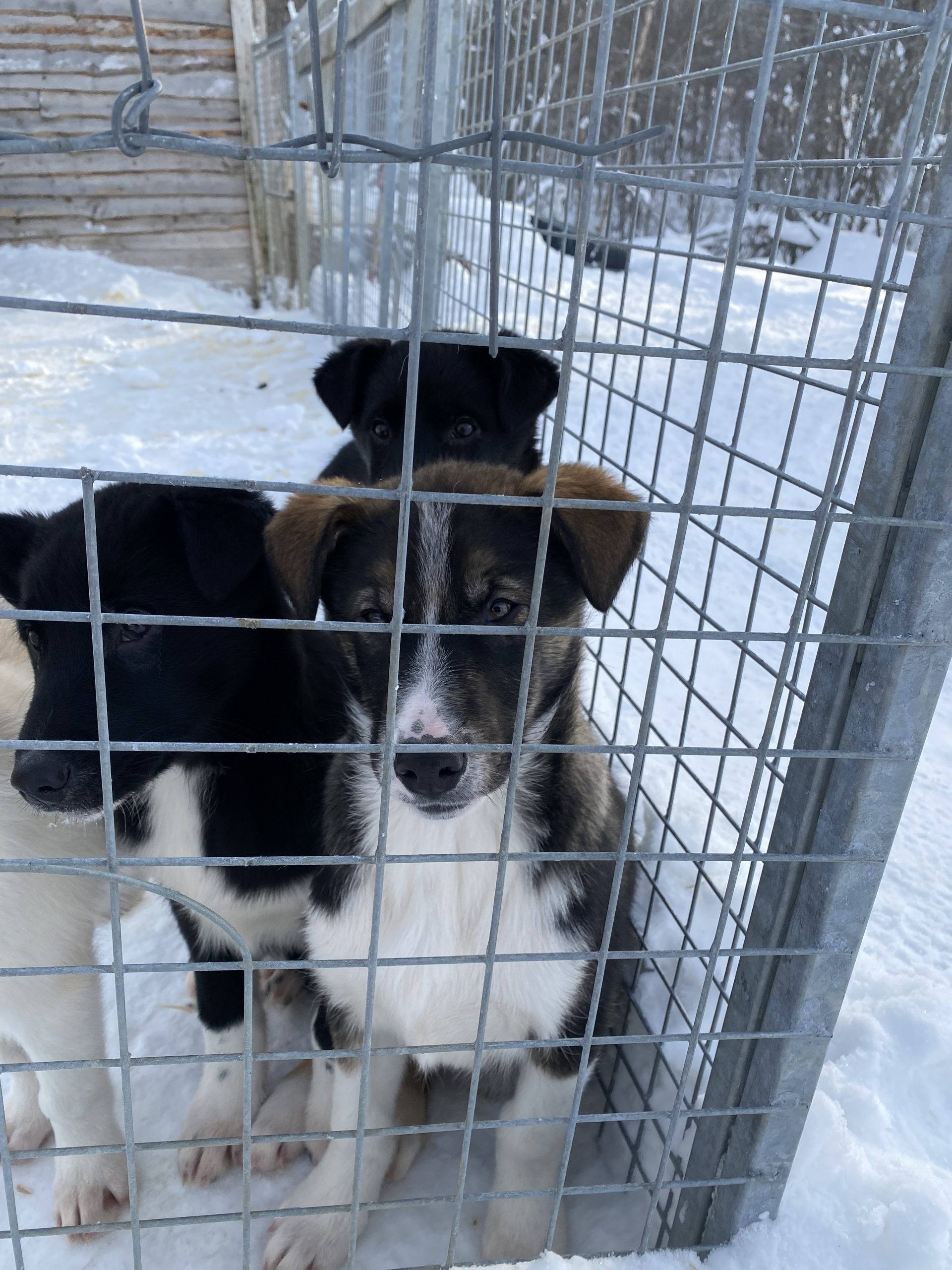 Who doesn’t love a puppy?

The drive to and from Aurora Husky was two hours each way from Narvik. That afforded us ample time to see the land and hear the history of Norway. The landscape is stunningly beautiful. If you want to see snow, Norway’s got what you want. We saw a pretty fox along the way and lots of moose. Norway’s involvement in World War II and occupation by Germany was interesting as told by our guide who shared stories of her grandparents’ experiences. They were forced to take a German officer into their home. I had no idea that Germany occupied Norway for five years. The area around Narvik was important because Sweden’s iron ore came through the port of Narvik. We are attending lots of lectures on the ship about Norway in WWII and are going to a museum in a few days dedicated to the subject.

To put the icing on the cake, we were treated to a nice showing of the Aurora Borealis last night from the starboard side of the ship. Today we are sailing into Alta, the so-called “City of Northern Lights.” We will be out in search of those elusive sightings tonight in the dark skies away from town. Hopefully, I will have more on that later. 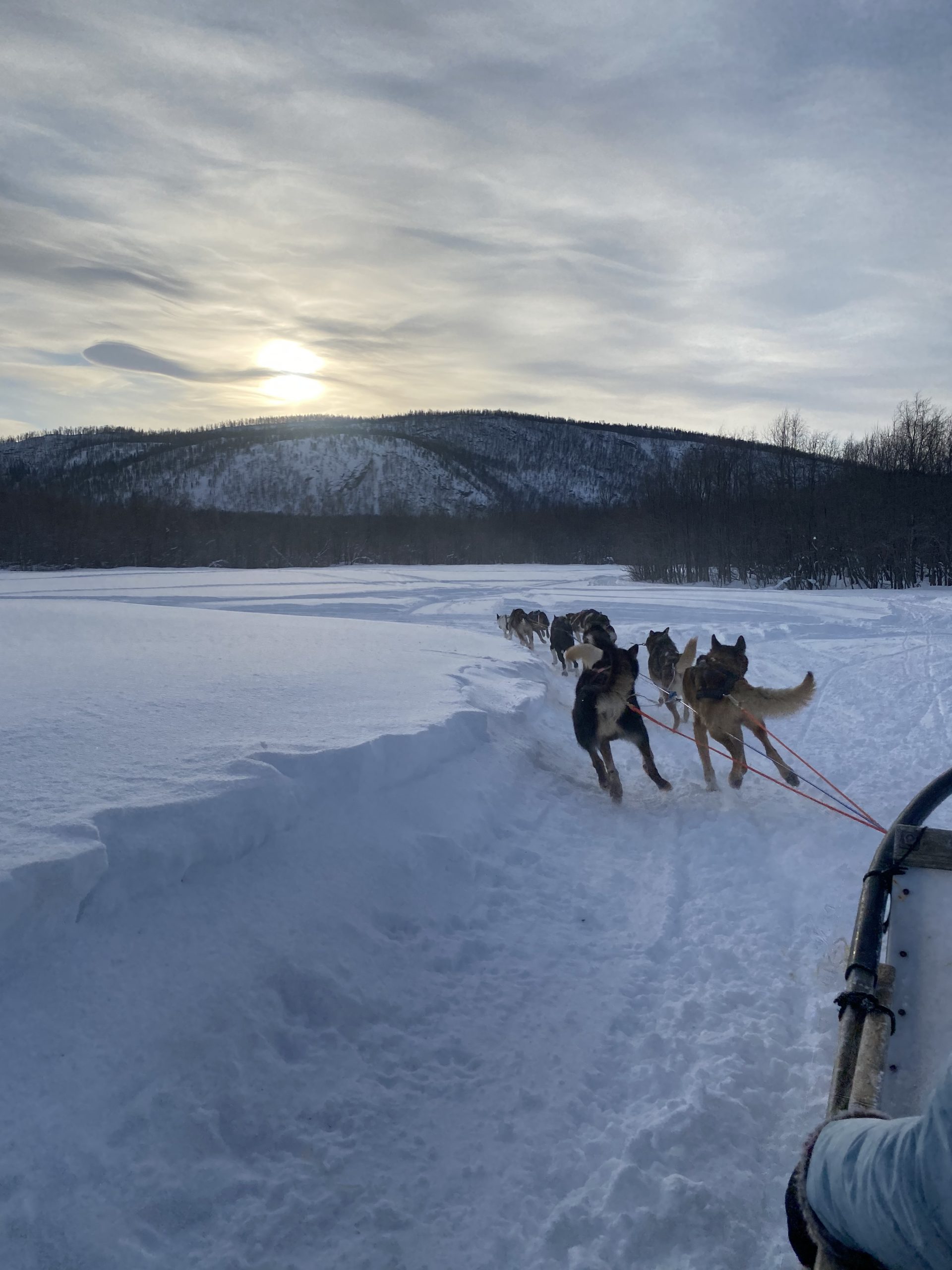 We love this picture; it was our view from the sleigh. Notice the position of the sun. It was exactly noon on 20 February 2022. 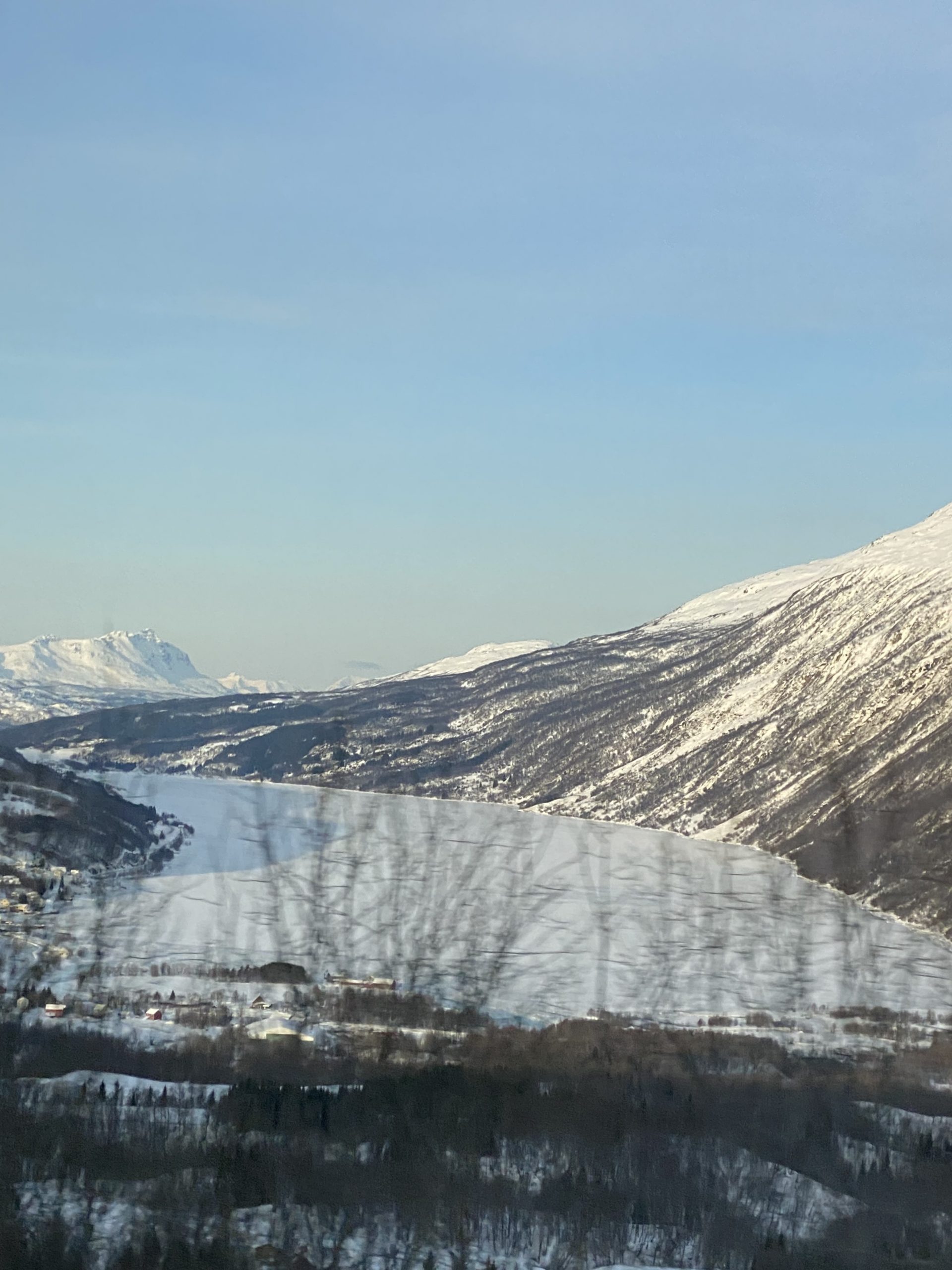