Gibraltar is exactly what we needed after the Northern Lights cruise. Don’t get me wrong: we loved our time in Norway, even if it was incredibly mind-numbingly cold. I know it makes us sound lazy, but getting dressed to go outside was such a chore. It took so much concentration and time. If we forgot a layer, we were reminded in a most cruel fashion when we had been outdoors for about two minutes. But we were richly rewarded for our efforts by the things we saw and experienced in Norway. 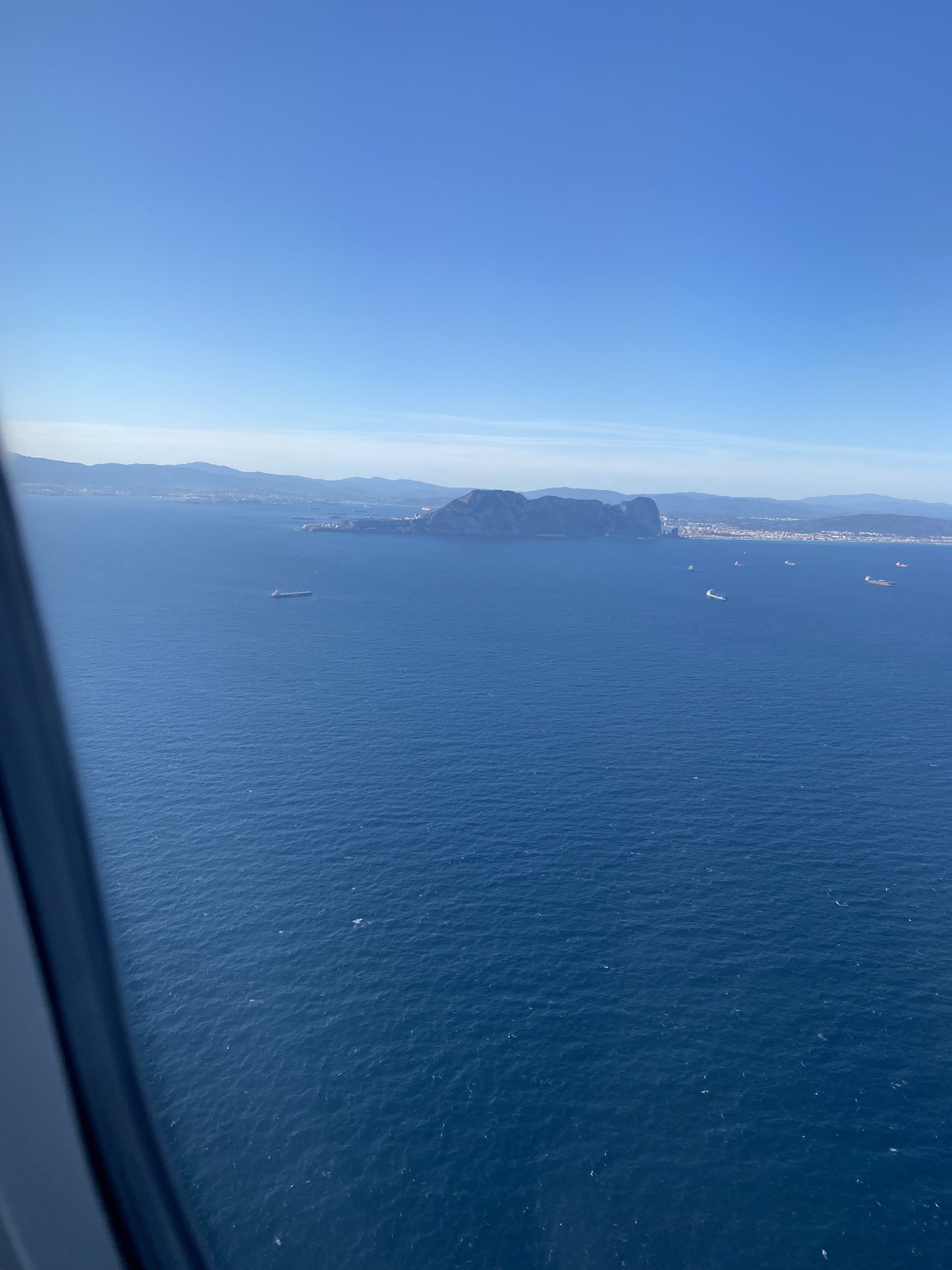 First look at the Rock of Gibraltar from our British Airways flight.

Gibraltar is the polar opposite of Norway in every aspect. Obviously, for starters, the weather here is warm and breezy, unlike the bitter cold of Norway. I love how the orange trees here have both fruit and blossoms on them, insuring a steady supply of fresh fruit, which is something only a climate such as this can foster. The humidity is low right now, but I suspect it climbs to obscene heights in the summer. Ditto the temperature.

In Norway, the population is homogenous and everyone pretty much looks alike; here the population is a mash-up of Spanish, English, Moroccan, Indian, and goodness knows what else. There are Jews, Muslims, and Christians all seeming to live in harmony. You are likely to hear several languages and accents every time you stroll down Main Street. Although Gibraltar is not an island, there is an island vibe here not unlike Bermuda or Funchal, Madeira, or even the Virgin Islands, but without the VI attitude. The best part for us has been the plethora of food choices. In just a few days, we’ve already enjoyed some incredible Moroccan tagines, some fabulous Indian curries, and some unforgettable Iberian ham and Spanish cheese. We have enjoyed interesting wines from Spain and even a great bottle from Lebanon. And, of course, we “turned up” for the English fish and chips in a pub down on Main Street.

There is so much history in Gibraltar since it is in such a strategically important location between the Mediterranean Sea and the Atlantic Ocean. The Strait of Gibraltar is, at its narrowest point, less than nine miles. How the Brits ended up with Gibraltar as its overseas territory is a long story. But what a sweet deal! You can leave wet, cold London and be in warm, sunny Gib in under two and a half hours. They speak English and gladly take British Pounds Sterling if you don’t have any Gibraltar Pounds Sterling. Up on the Rock, you can look out and see Morocco, Ceuta, and Spain. The waters surrounding the peninsula are teeming with all sorts of commercial cargo container ships, sailboats, and cruise ships. We were told that the ships can fuel up with no tax on their gas, so that’s a huge incentive to pass this way for shipping companies.

We really enjoyed our tour of this 2.6 square mile city. There’s much to see packed into the small space. I will share some of our favorite pictures. 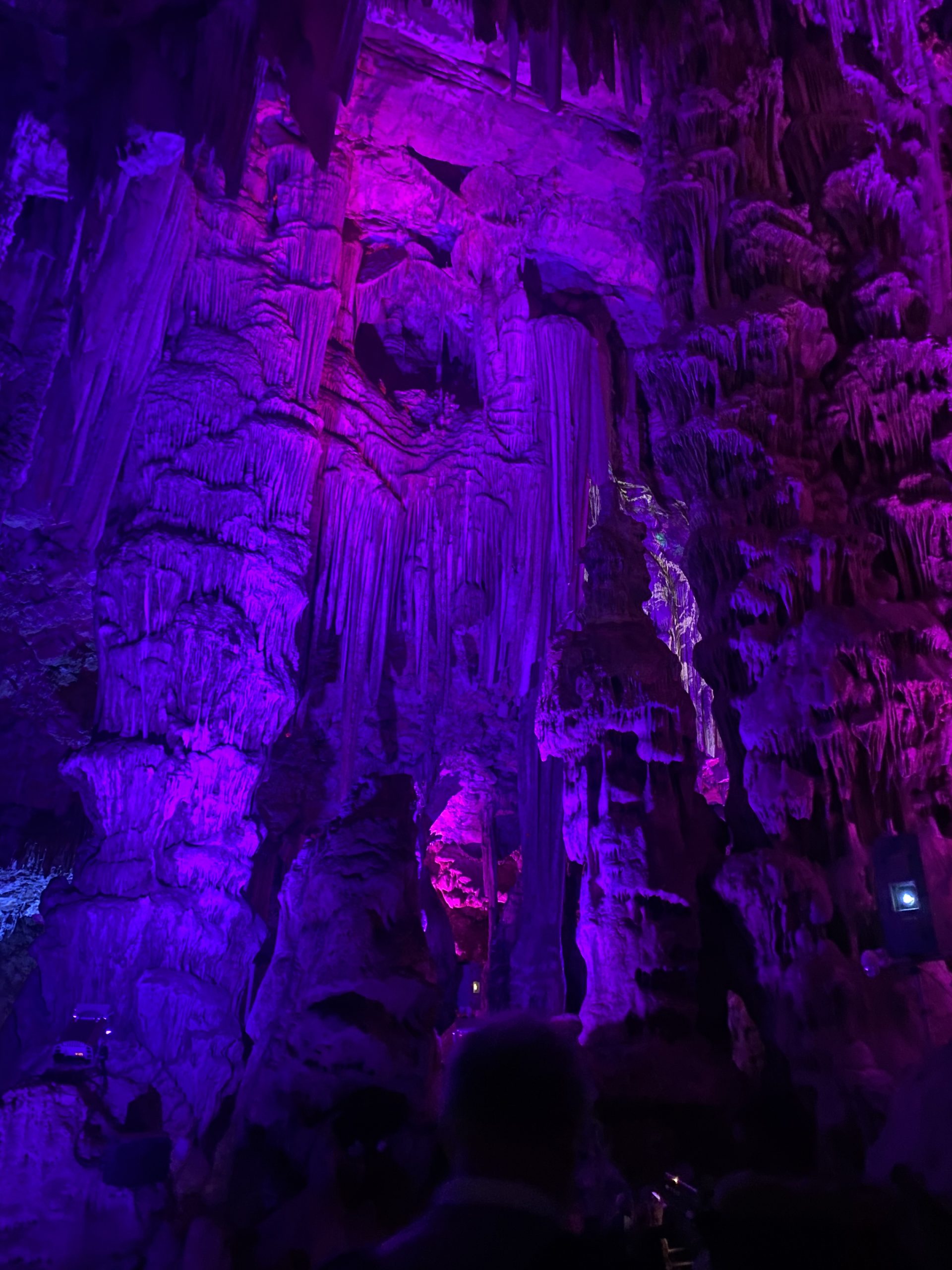 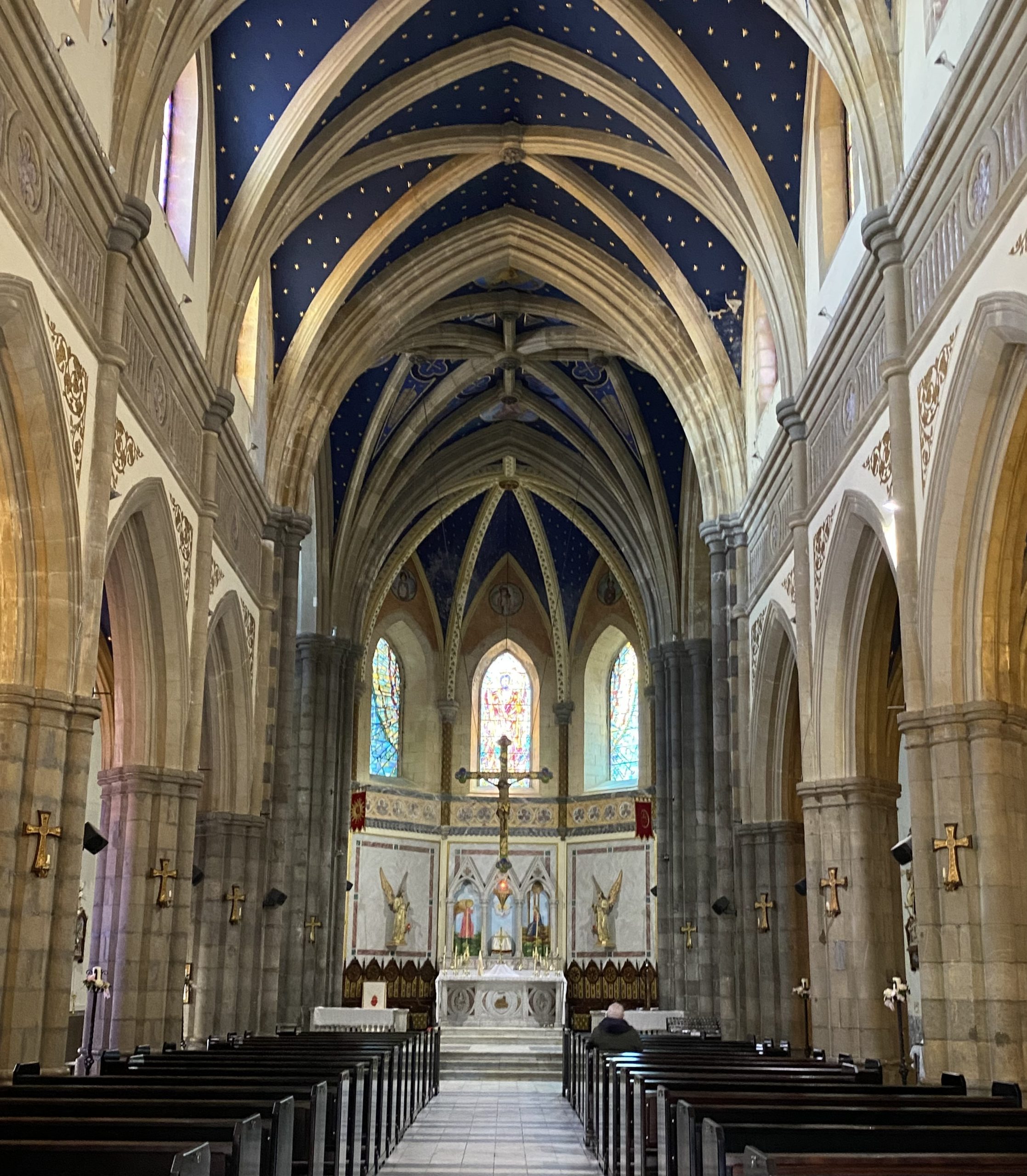 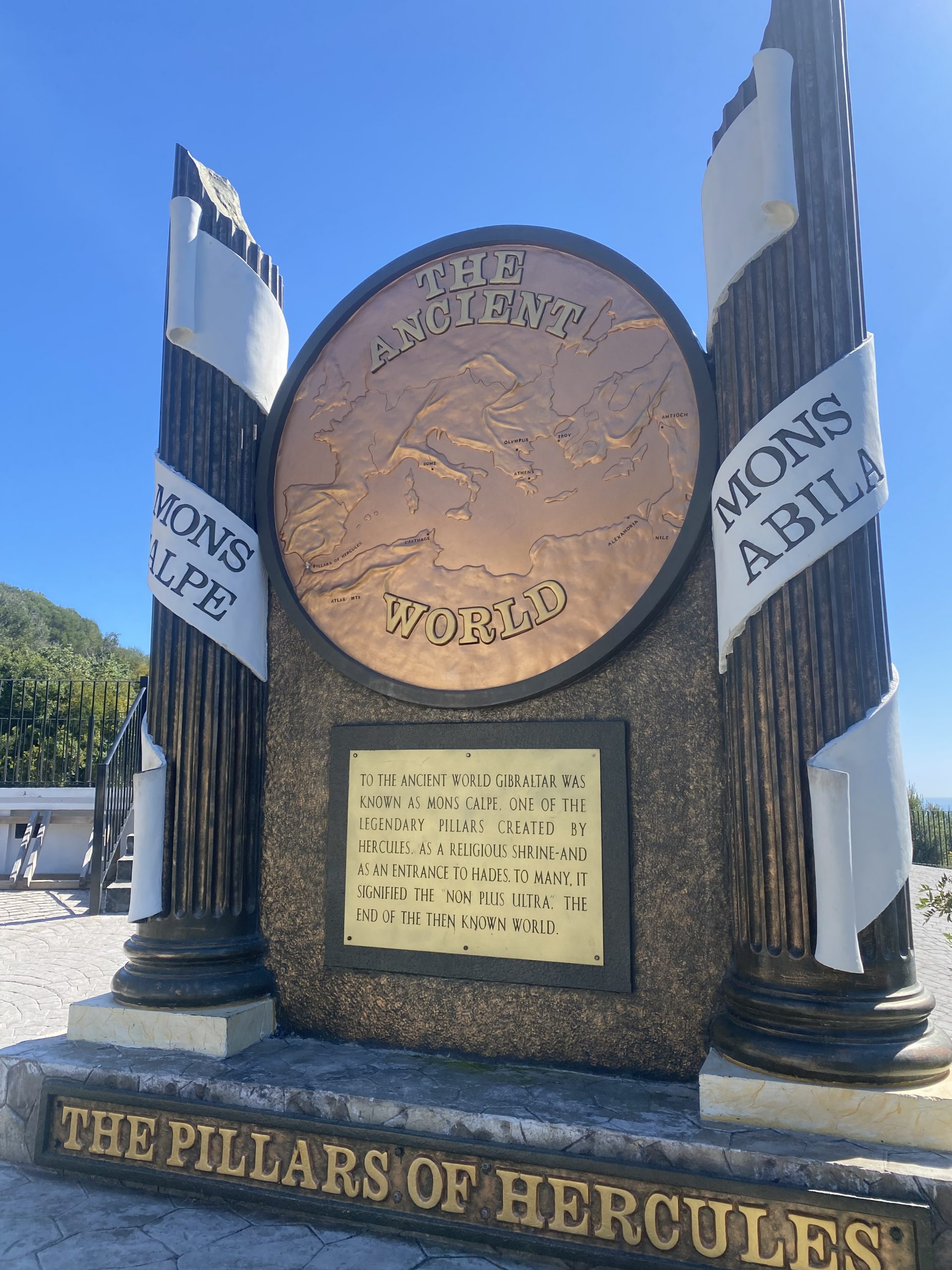 The Pillars of Hercules — Ancient World and Modern World. 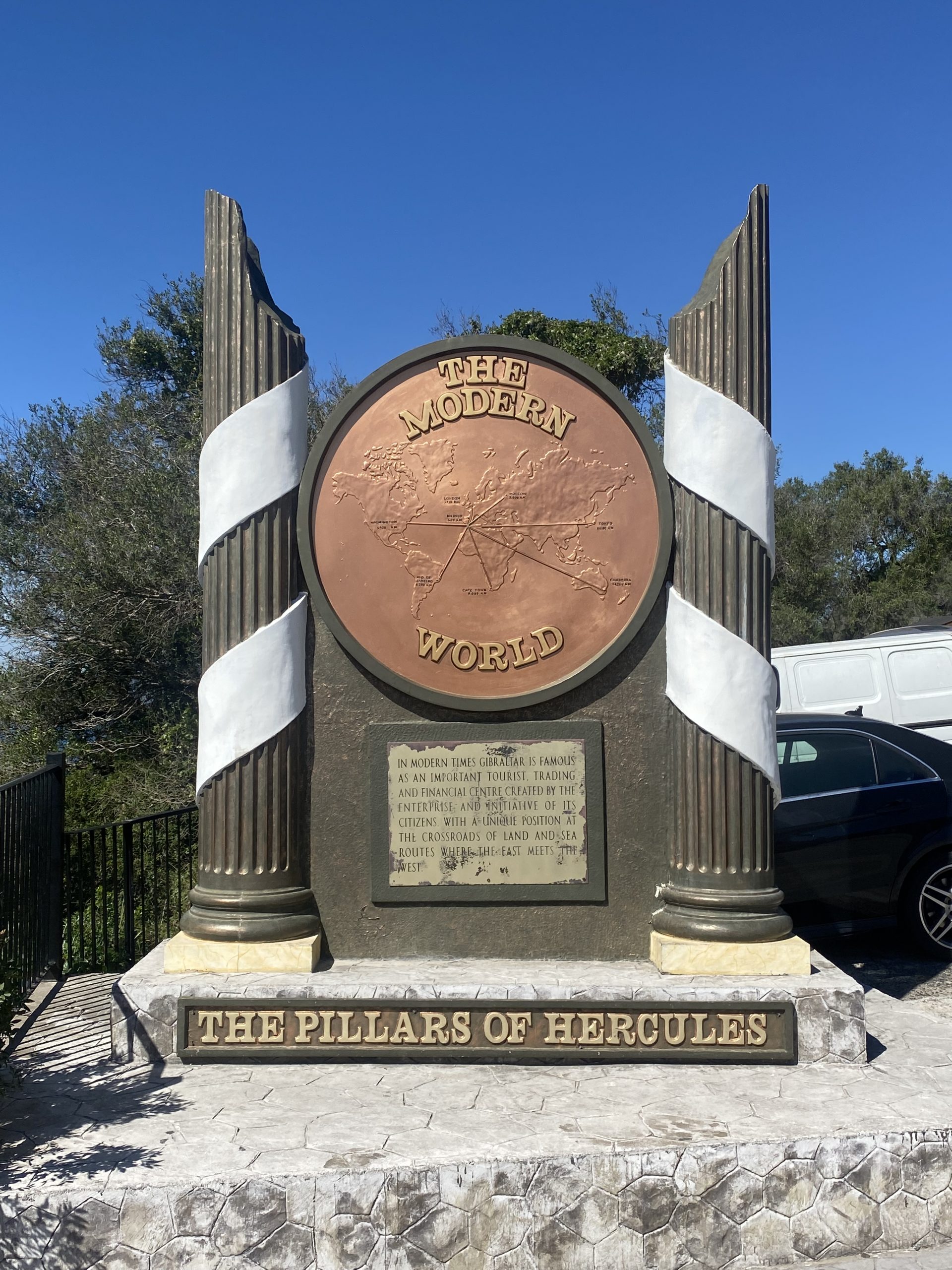 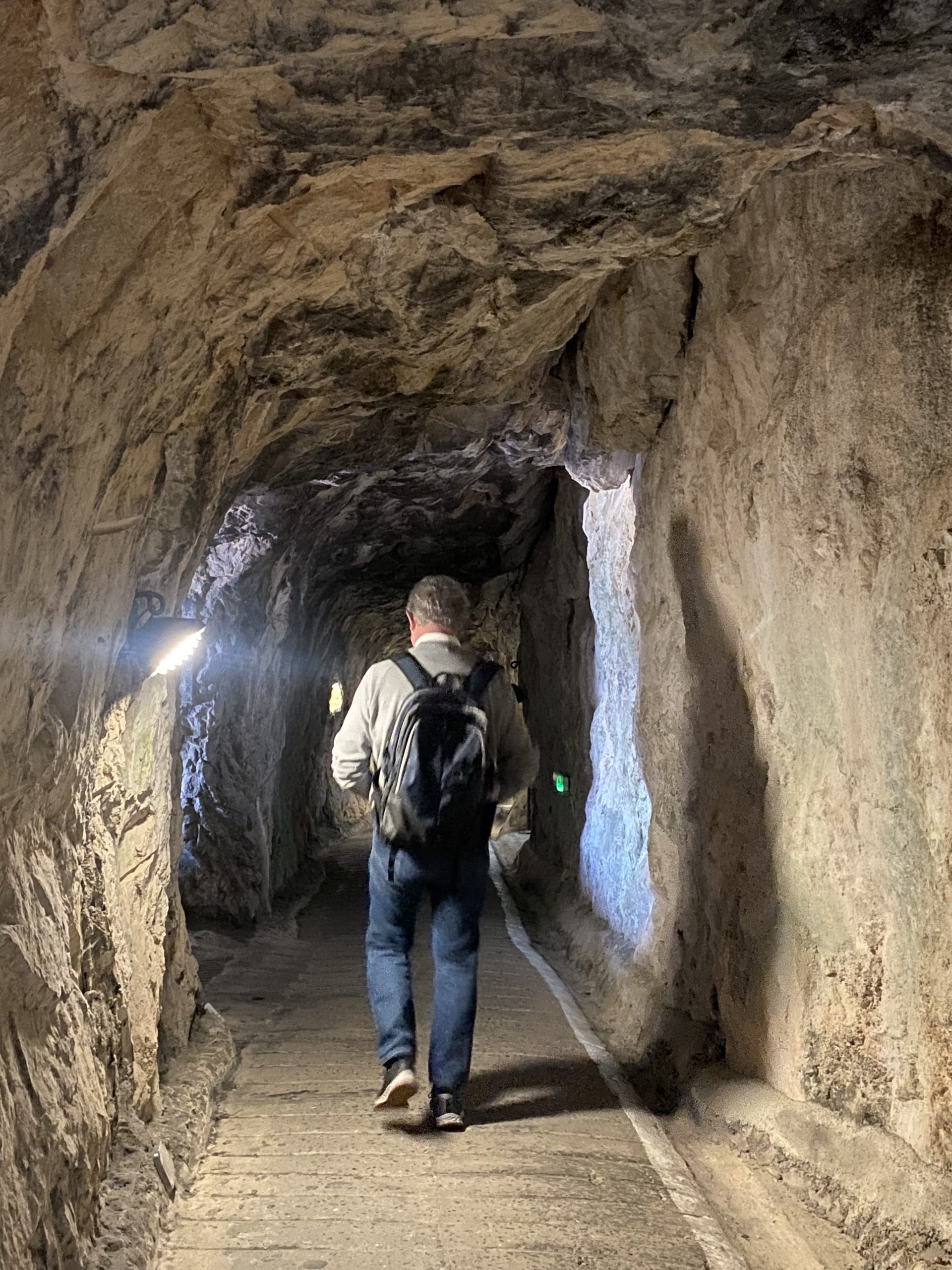 Inside the Great Siege Tunnels. 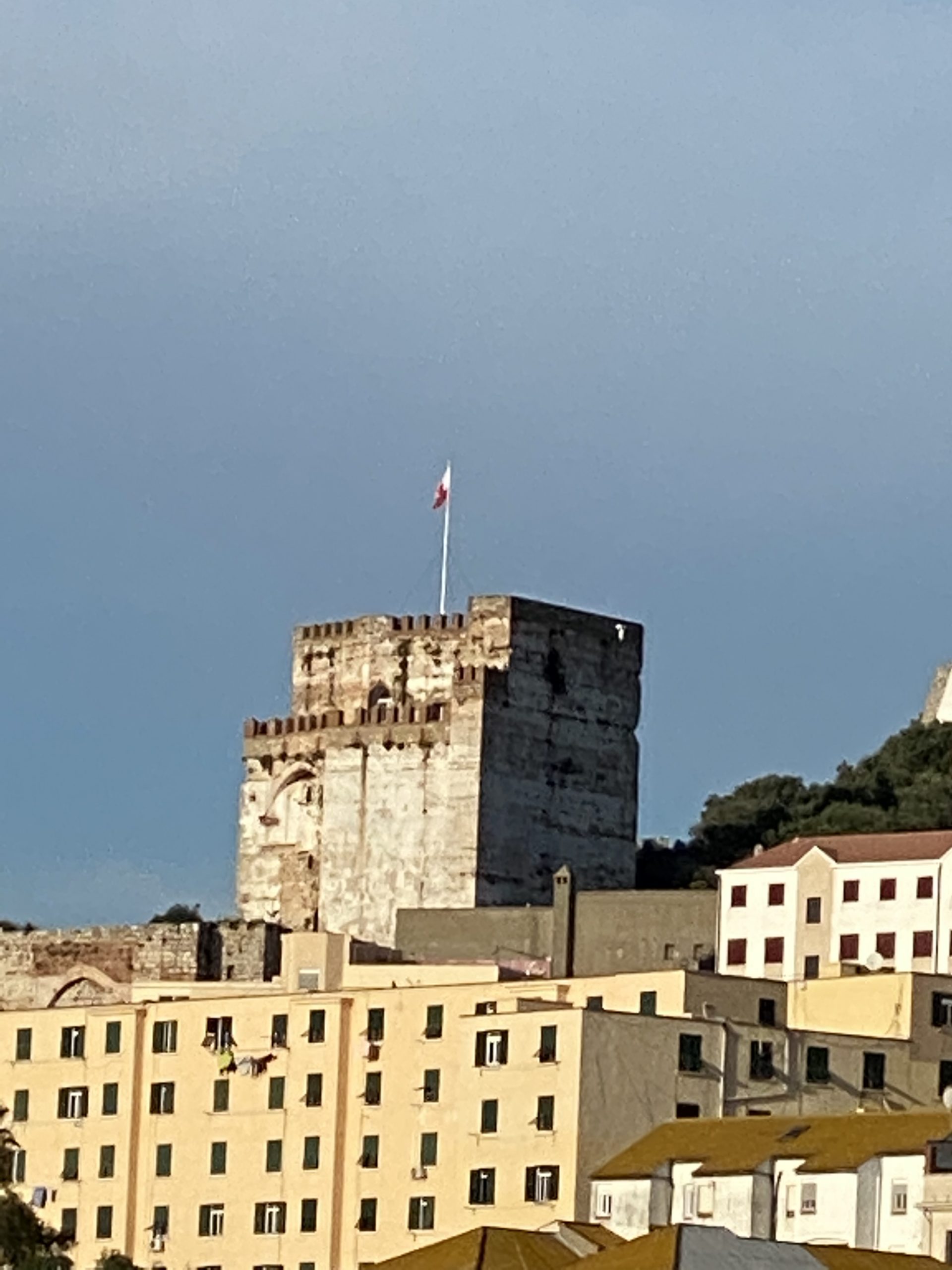 This Moorish Castle dates from the 1100s. The Moors first came to Gibraltar in the 700s. 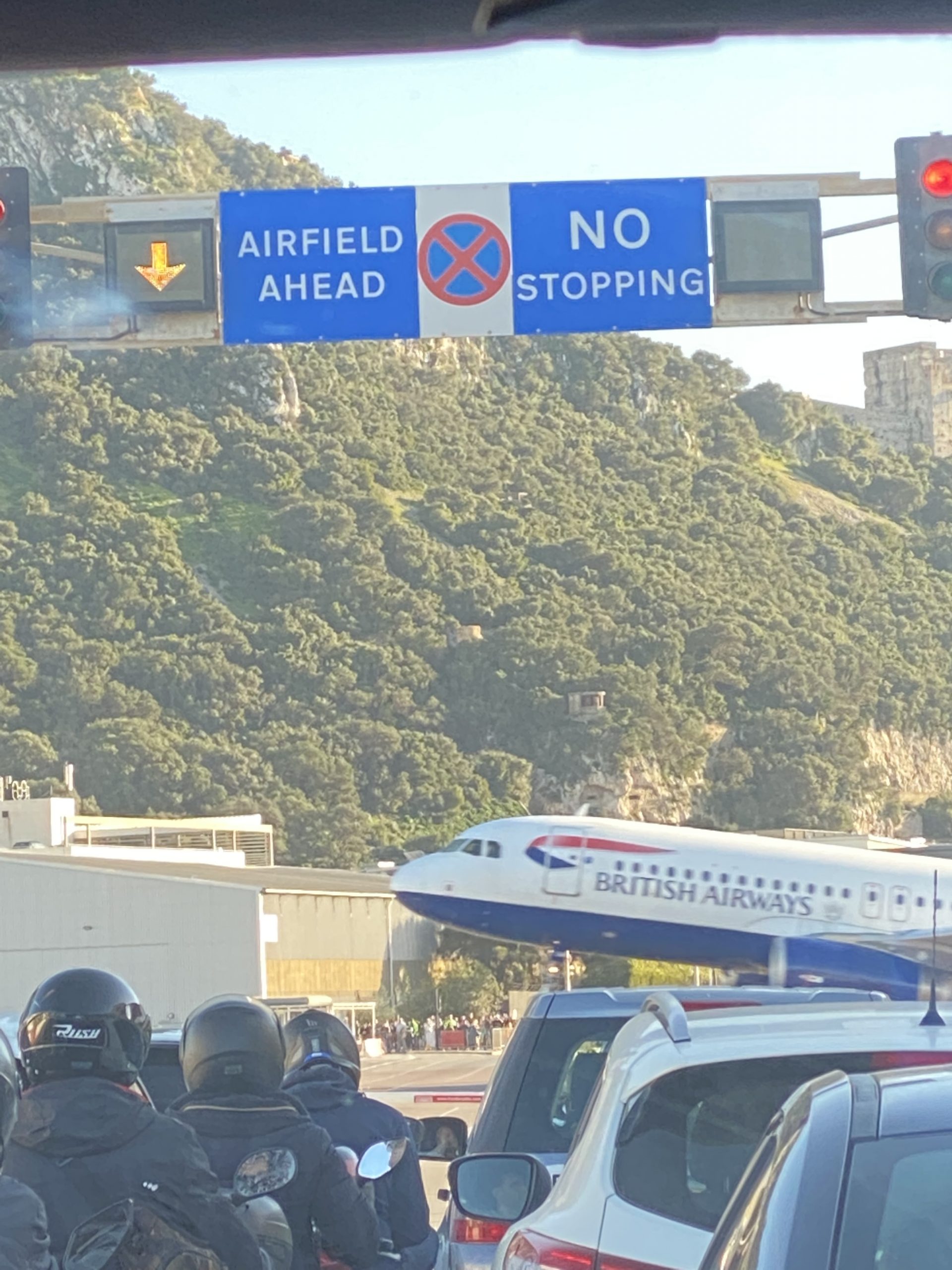 We loved how the crossing arm went down and, instead of a train, a jet crossed the highway in front of us on the GIB runway. 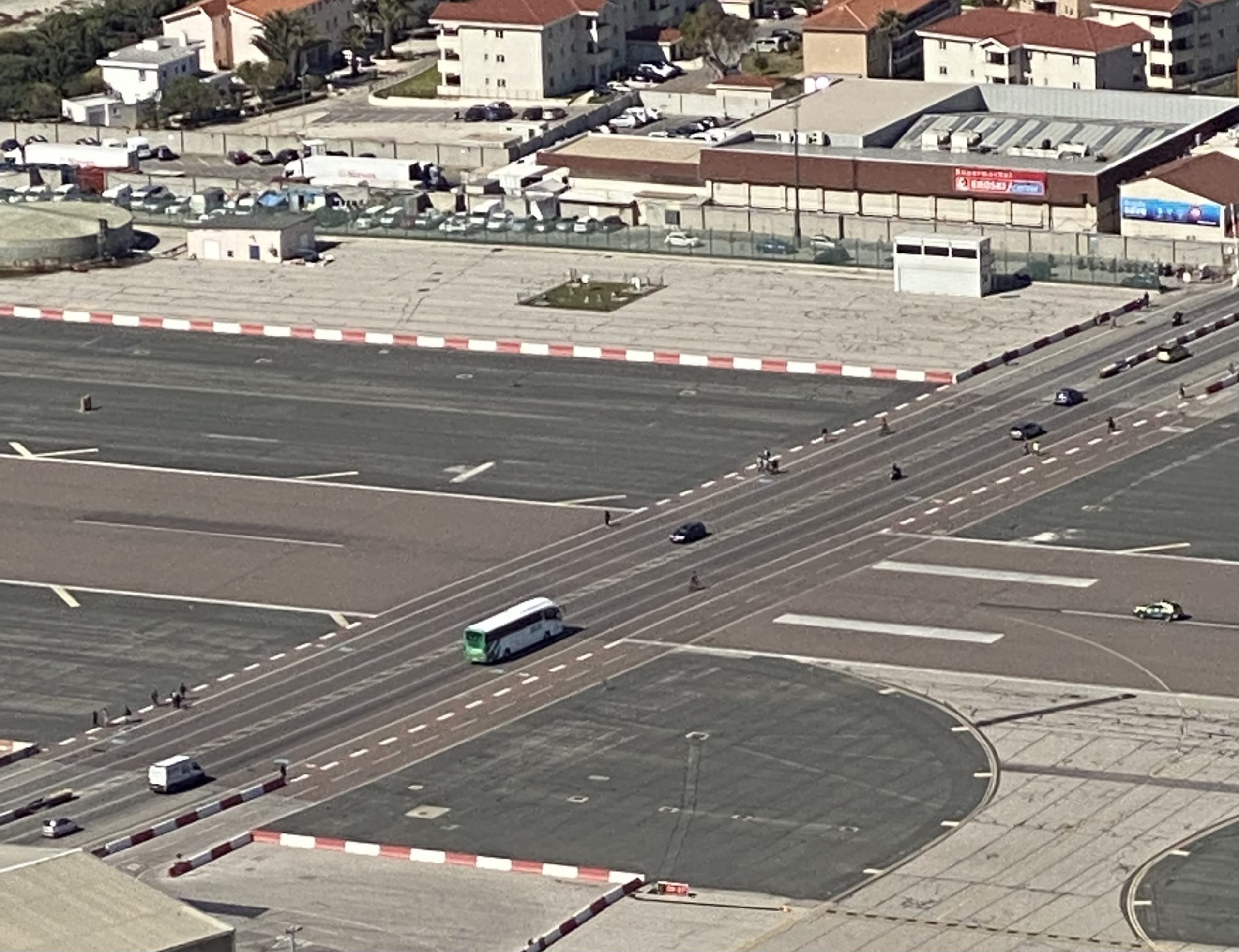 Check out the bus crossing the runway on Winston Churchill Avenue. 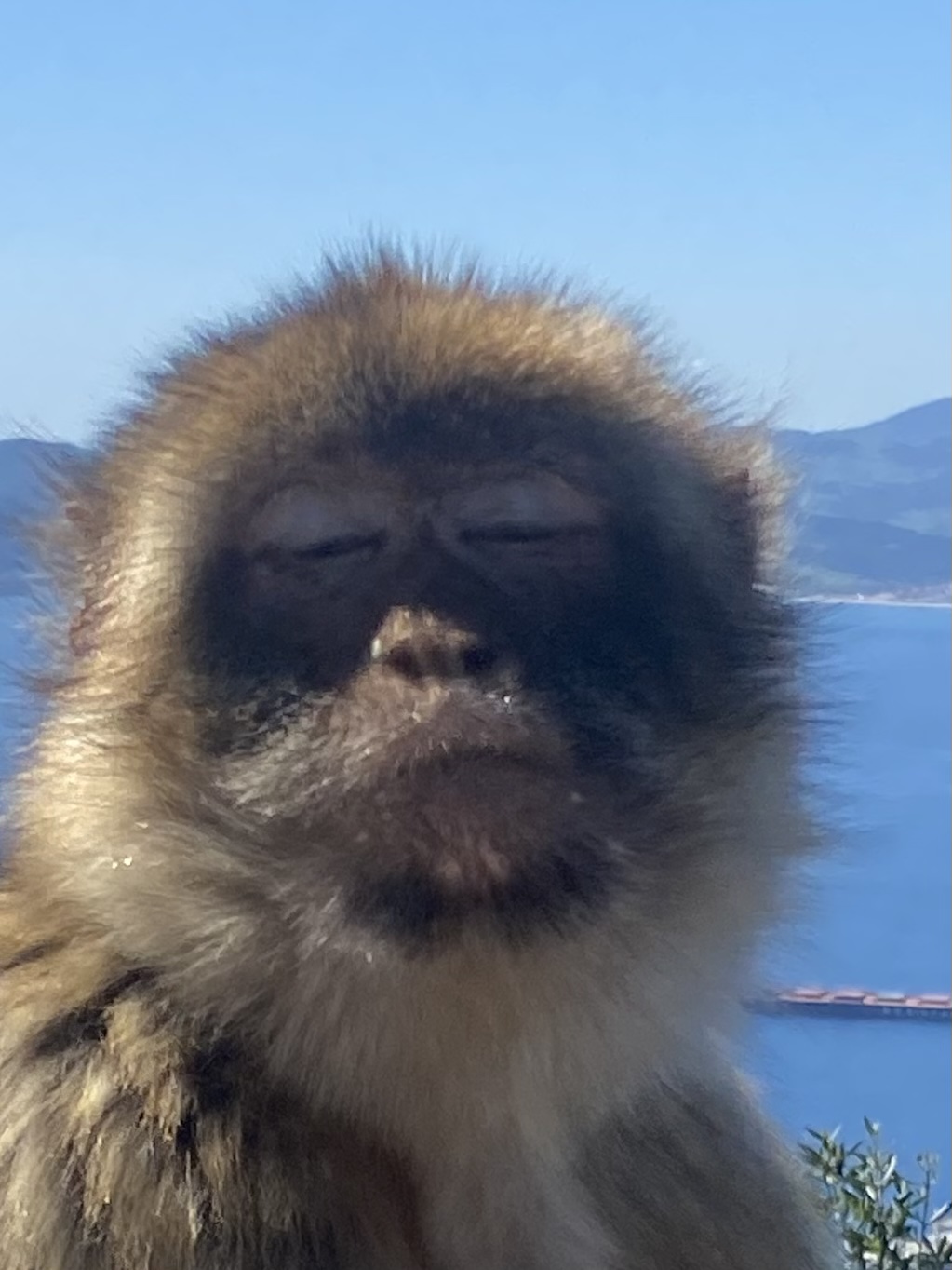 Gibraltar has about 360 Barbary macaque (AKA Barbary apes). They are native to the Atlas Mountains in Morocco and Algeria. This is the only population of wild apes in Europe and are thought to have been introduced here from Morocco.