The Lady and the Desperado of the Rockies 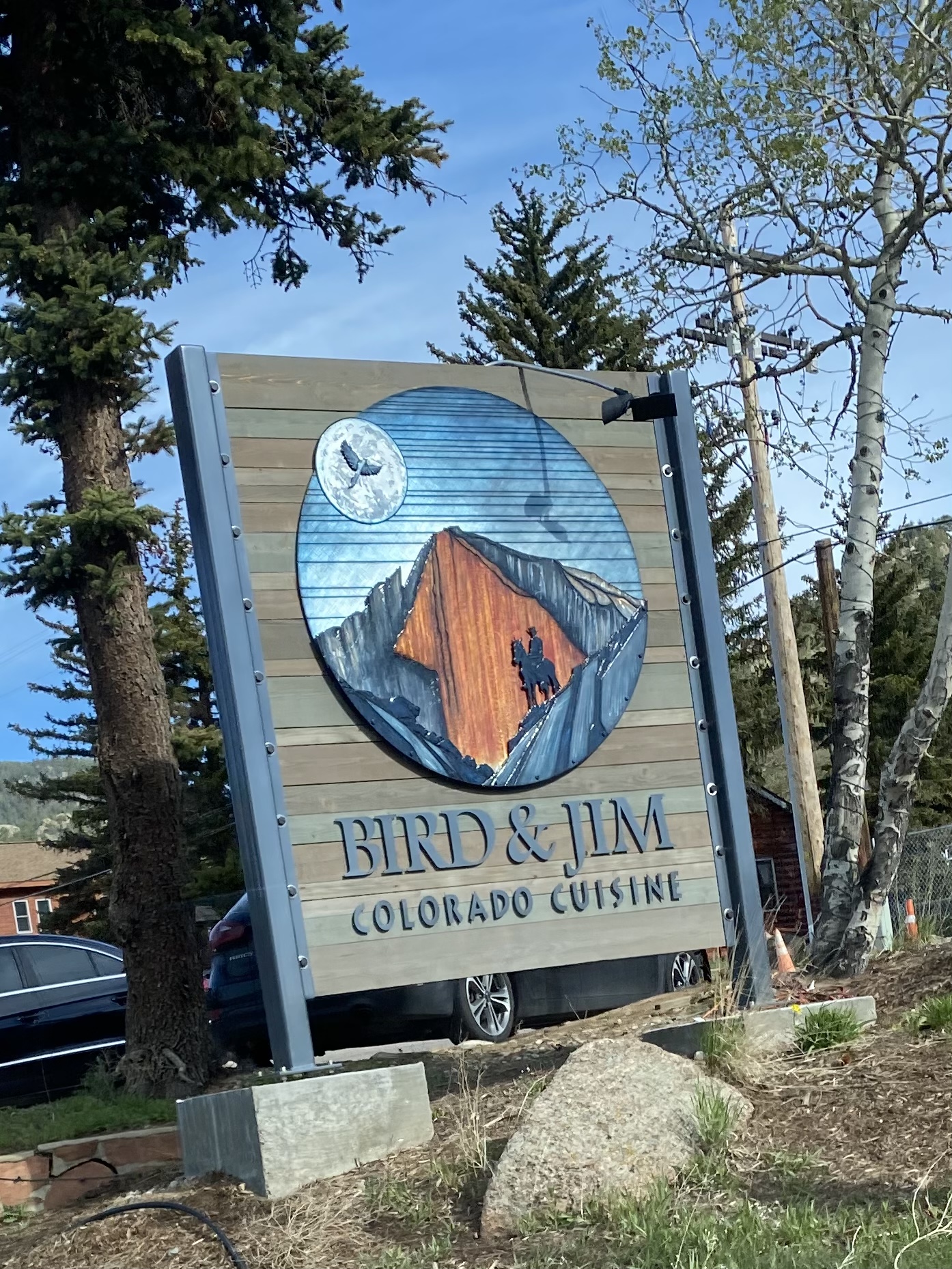 This is a story about an incredibly odd couple in an incredibly special national park. Bird and Jim are legends around these parts. There is even a restaurant called Bird & Jim in Estes Park, Colorado. There have been more than one book chronicling these two characters, their adventures in the Rocky Mountains, as well as their relationship, which took place in the early 1870s. At least once, a local theater group has portrayed the odd couple on stage. Reading about them on the restaurant’s website made me curious enough to dig around searching for more about them. Talk about falling down a rabbit hole. Here we go!

To call Isabella Lucy Bird a strong-will trailblazer is an understatement. Born in Edinburgh in 1831, Isabella was very intelligent, but she was frail and sickly as a child. Her parents educated her in a wide range of subjects and she was an eager student. Actually, Isabella published her first literary work at the age of sixteen. When she was in her twenties, her physicians advised a sea voyage , so she set sail for the US with some cousins. Her father gave her one hundred pounds Sterling and told her to stay away as long as it lasted. Her written accounts of her travels were published and became very popular. In fact, her books are still being reprinted to this day. She caught the travel bug and, in 1872, she went to Australia and then on to Hawaii, which was then called the Sandwich Islands. From there she traveled to the Rocky Mountains, first sailing to San Francisco, then catching a train to Colorado. From there, most of her travels were on horseback. She disliked riding sidesaddle as she was “supposed” to ride, being a woman. She instead rode frontwards like only men did in those days. I am reading her book A Lady’s Life in the Rocky Mountains. Her description of the area in the 1900s was incredibly insightful and interesting and I am having a hard time putting it down. She was indeed an intrepid, fearless traveler and a talented writer.

Now I will introduce you to Jim Nugent. Around here, most people just called him Rocky Mountain Jim. He came here from parts unknown and built a cabin just outside Estes Park. He installed himself as a guide for hire in the area. Keep in mind that this was before Rocky Mountain National Park was established as such, but the beauty of the area was well known and people came from all over the country to see what all the talk was about. Rocky Mountain Jim was not, as we say, “easy on the eyes.” He probably would have been a pretty good looking man, if that rugged look is your thing, but he had an altercation with a grizzly and that left him short one eye.  Here is the account of that encounter from an area newspaper: “He told of the grizzly bear attack in July of 1871 while he was in Middle Park. His collie, Ring, had scared up the bear and her cubs. The dog ran to Jim for protection, with the bear after him. Jim put four balls into the grizzly without stopping her. She jumped on him, chewed his left arm through at the elbow, bit off a thumb at the first joint, slashed his face, and left him for dead. He managed to get on his white mule and rode eight miles to Grand Lake, apparently taking two days to get there, where a passing doctor sewed up fifty wounds. The claws of the bear did not destroy his right eye, but tore the skin in such a way that a carbuncle formed over it.” Here is how Isabella Bird described Jim’s face: “One eye was entirely gone, and the loss made one side of the face repulsive, while the other side might have been modeled in marble.”

Rocky Mountain Jim guided Isabella Bird while she was in the area. In fact, he took her to the top of Long’s Peak. She was the third woman to make the climb, and she readily admitted that she only made it to the top because he hauled her up there. Her account of the hike is frightening and exhausting to even read. Isabella and Jim struck up a friendship that was rather unlikely and she continued to correspond with him even after she left Estes Park and returned to Scotland. Isabella said that Jim had “DESPERADO” written all over him, but she described him as a perfect gentleman when he was in the presence of a woman, always chivalrous and polite and respectful. On the first day she hired him to guide her, he rode along beside her on horseback and she said they had a fascinating three hour conversation. “We entered into conversation and as he spoke I forgot both his reputation and appearance,” she said of him. The two were apparently quite captivated with each other, but there may have been more to their relationship. But Jim had a dark side and was prone to arguing and fighting when he was drinking. Isabella said he was “given to ugly fits.” Accounts of his past are sketchy, but reportedly he was haunted by an old love and by what he had experienced in war. I guess he suffered from PTSD before it had a name. Nobody wanted to be around him when he imbibed, even Ring, his dog. Some say Isabella gave him an ultimatum: he could have her or the booze, but not both. Well, it seems he chose booze. Isabella once wrote that Jim was “A man any woman might love but no sane woman would marry.” 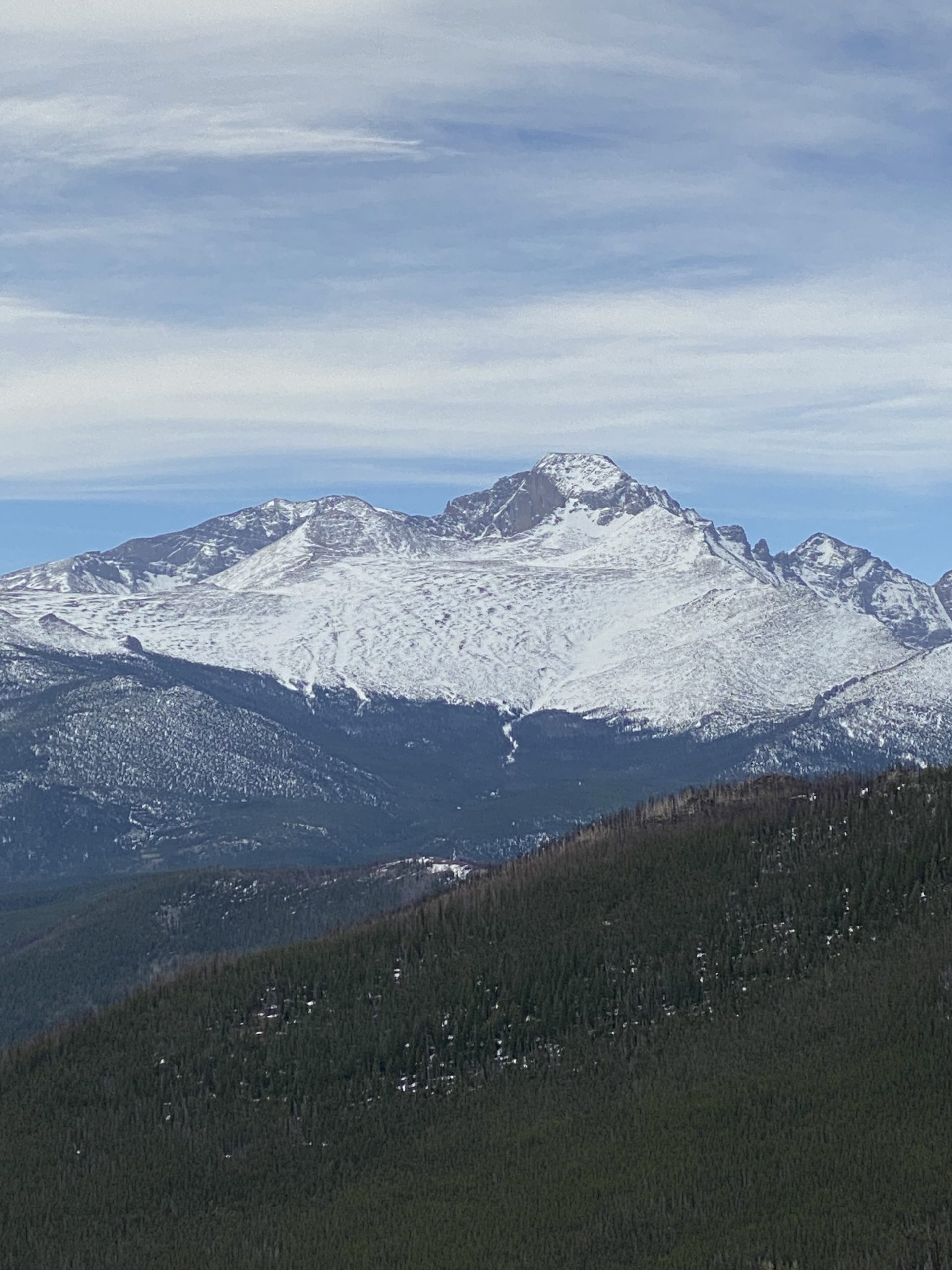 Long’s Peak — It’s a “fourteener” and can be seen from many locations in the park. The Ute Indians used it for navigation- their “North Star.”

Isabella continued to travel and write travelogues throughout her life. She married a surgeon, John Bishop, back in Scotland, but he passed away after about five years of marriage. Apparently, after his death, Isabella decided she needed to do something important with her life, so she studied medicine so that she could travel as a missionary. Indeed, she left home for India at the age of sixty. Later, she traveled to Iran, Turkey, China, Japan, Korea – the list of places she visited just goes on and on. In Turkey, she set up a hospital and named it after her late husband. It will come as no surprise that Isabella Bird became the first woman to be awarded Honorary Fellowship of the Royal Scottish Geographical Society and the first woman to be allowed to join the Royal Geographical Society.

Isabella became ill and died at the age of 73 at her home in Edinburgh. At the time of her death, she was planning another trip to China. She was inducted into the Colorado Women’s Hall of Fame in 1984. Jim was shot dead about nine months after Isabella left Colorado. He got into an altercation with a man called Griffith Evans, who was a rival guide, about the future of the area. There was a man named Lord Dunraven who wanted to turn the area into a hunting preserve. Evans was in favor of that plan but Rocky Mountain Jim was opposed to the idea, as were many locals. On the night he died, Isabella was in Switzerland. She said that he appeared at the foot of her bed to say good-bye as he had always promised to do. Isabella’s book chronicling her time in the Rockies helped make people aware of the region’s rugged beauty. This awareness helped pave the way for the preservation of the area and the ultimate designation as a national park in 1915. Even after all these years, Isabella and Jim’s time together here is still the subject of much discussion and speculation, probably a little because of their unlikely relationship, but mainly because the harrowing tales from the peaks of the many “fourteeners” within the bounds of the Rocky Mountain National Park. (There are fifty four “fourteeners” in RMNP.) Although their love for each other is in question, there can be no doubt that they shared a deep love for the Rockies. I am going to finish with a passage of Isabella’s wonderful descriptions of the area. I know you will enjoy her beautiful writing.

”Cottonwood trees were green and bright, aspens shivered in gold tremulousness, wild grape-vines trailed their lemon-colored foliage along the ground, and the Virginia creeper hung its crimson sprays here and there, lightening up green and gold into glory. Sometimes from under the cool and Bowery shade of the colored tangle we passed into the cool St. Vrain, and then were wedged between its margin and lofty cliffs and terraces of incredibility staring, fantastic rocks, lined, patched, and splashed with carmine, vermillion, greens of all tints, blue, yellow, orange, violet, deep crimson, coloring that no artist would dare to represent, and of which, in sober prose, I scarcely dare tell.”