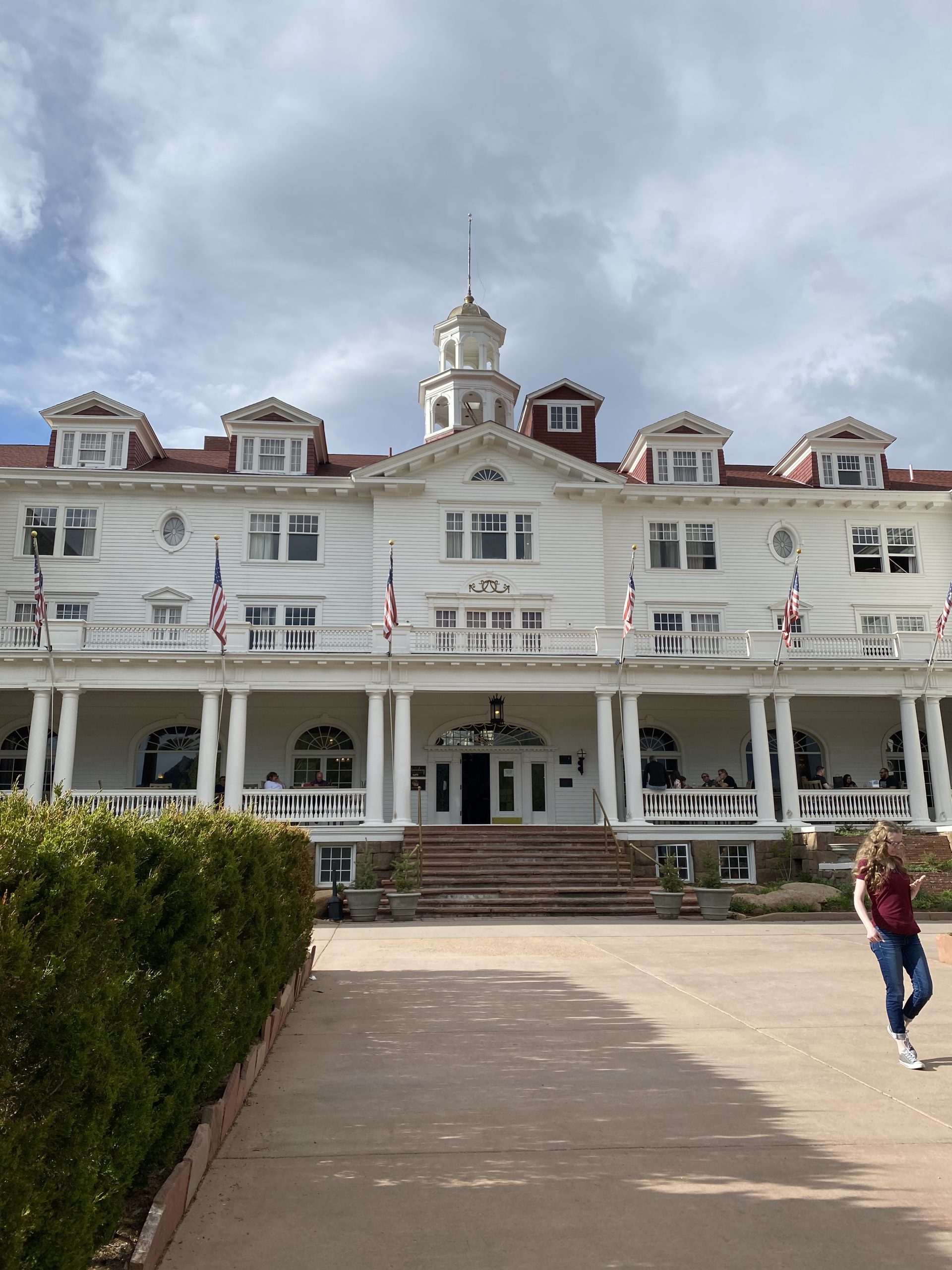 I don’t do scary. I don’t read scary books and I don’t watch scary television shows or scary movies. I decided a while back that life is scary enough and there’s no need to subject myself to scary when I am relaxing. I did, however, watch “The Shining.” Can’t remember why, but I did. That’s the only scary movie I have ever seen in my whole life, and I think Jack Nicholson turned in a stellar performance in that movie. I thought he was pretty dang good in “As Good As It Gets,” too. Great movie. What a nut job. He sure can do crazy.

When I found out that the Stanley Hotel in Estes Park was the inspiration for the movie, I was ready to book a room. However, the reviews made the hotel sound scary, but not in a Freddie Krueger sort of way (who is Freddie, anyway??), but in a wallpaper-hanging-off-the-wall and construction-trash-all-over-the-rooms sort of way. I’m talking really frightening, not movie frightening. So, instead, we are staying at Murphy’s Resort. I personally would call it a motel, but what do I know? I guess it depends on how you define “resort.” 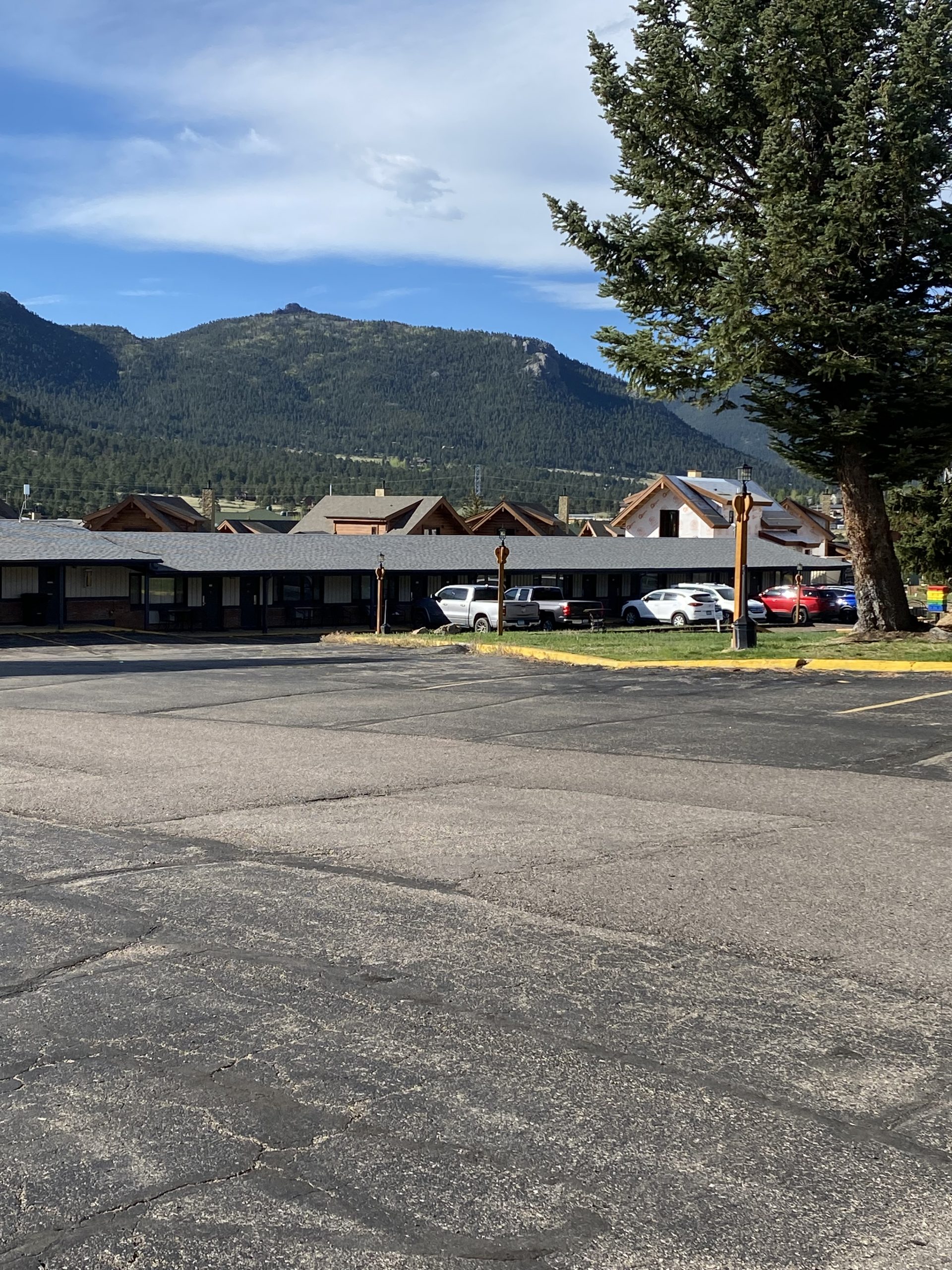 Let’s be honest. Murphy’s Resort is a motel, not a resort. We loved it here. 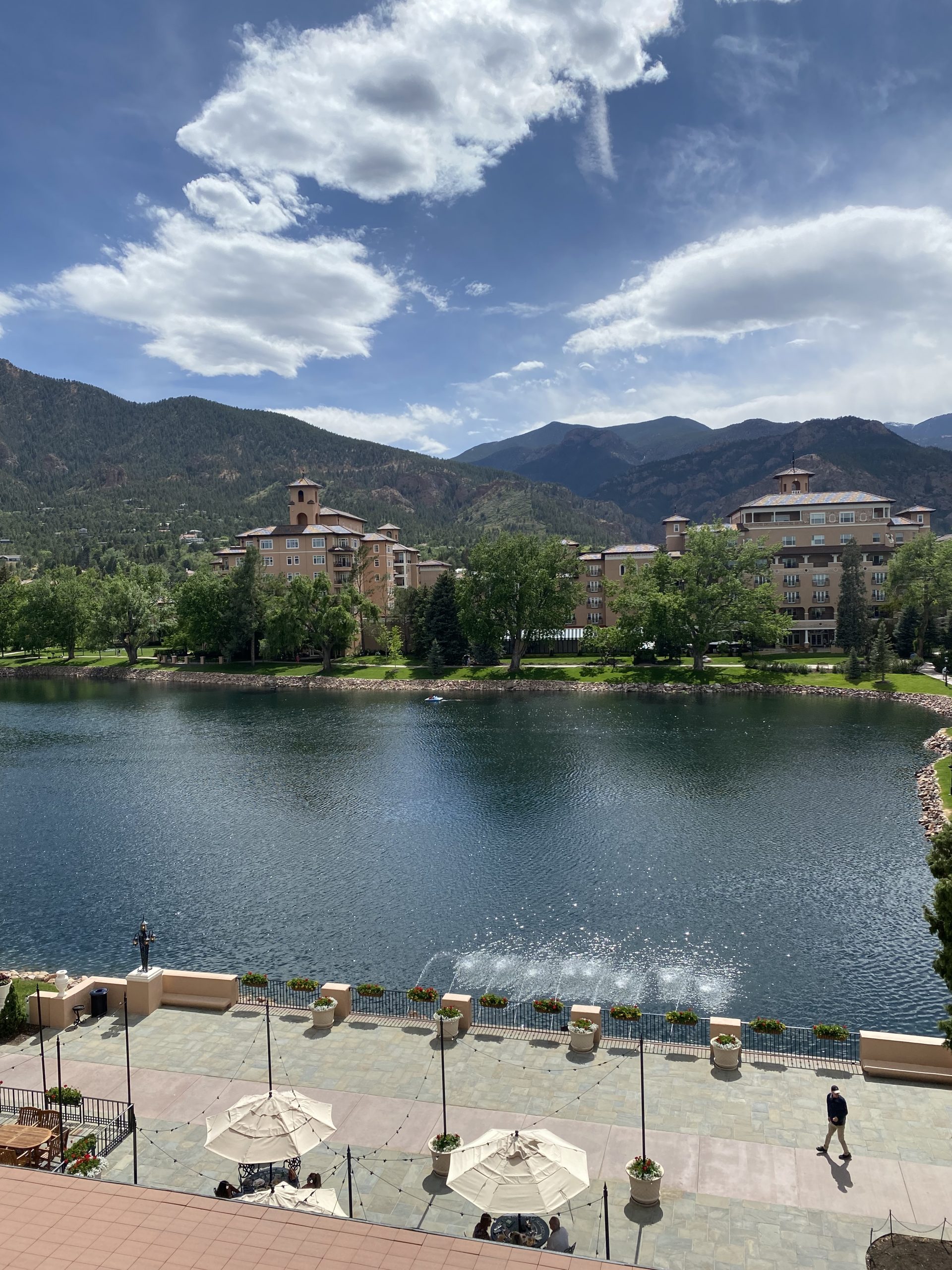 The view from our room at the Broadmoor in Colorado Springs. Now this is a resort! 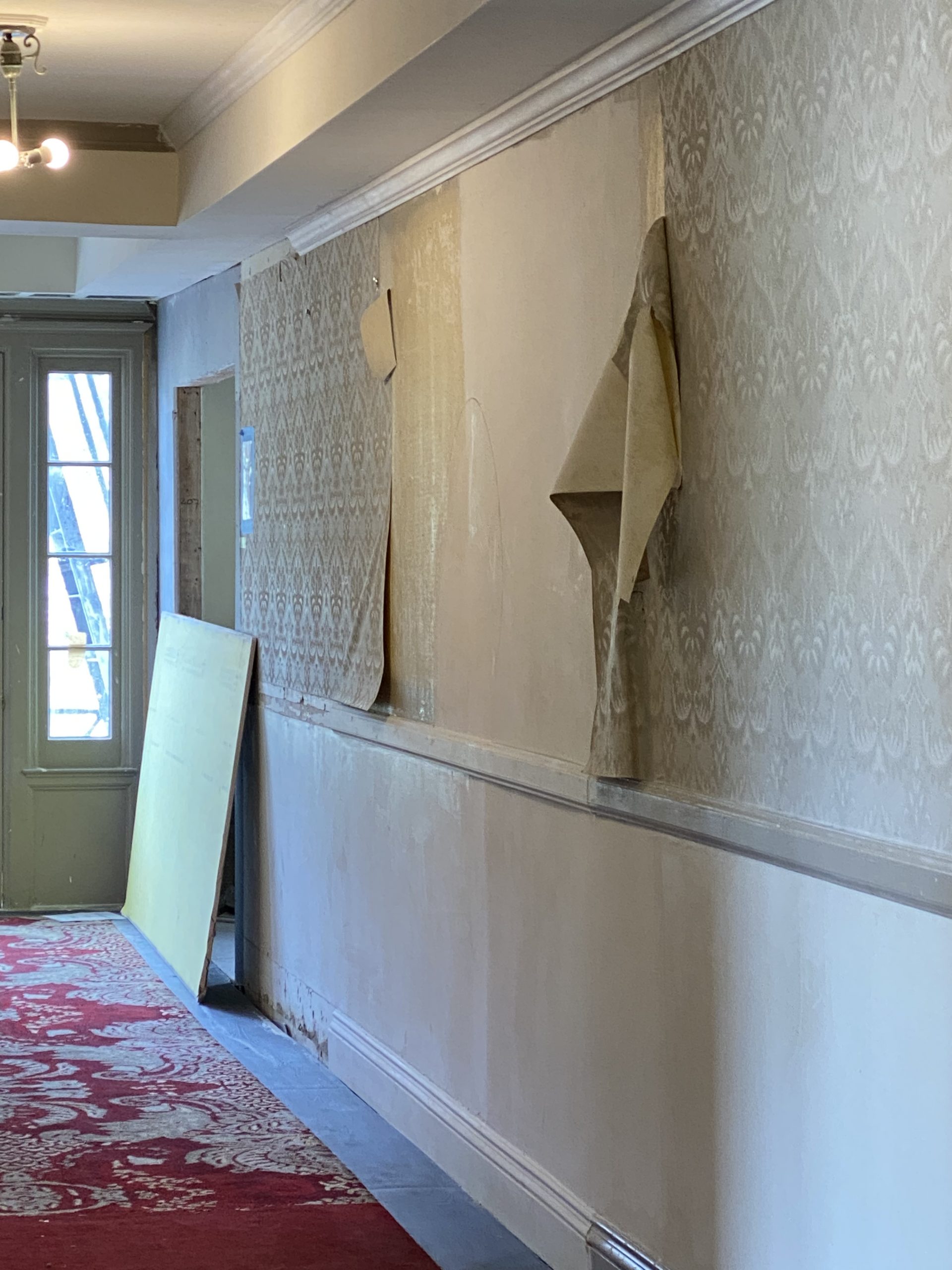 You thought I was kidding about the wallpaper hanging off the wall at The Stanley, right?

But, we did swing by The Stanley for a tour and a drink. I know we should have had a REDRUM in honor of the movie.  You know, “murder” spelled backwards, just like in the movie. (My iPad won’t make the letters backwards, but I will show you how the hotel spells it on all their merch. See below.) The hotel makes almost every list of most haunted hotels. They give tours all day long and also night tours. It looks like the tours pay their bills. No, seriously, I will tell you how they pay their bills. They have a concert almost every night in the concert hall. The afternoon we were there, people were flooding in for a performance by Sister Hazel. Looks to me like they book talent from “back in the day” and these groups have loyal fans. People like Crystal Gayle and Joan Collins were on their list of recent guest performances. 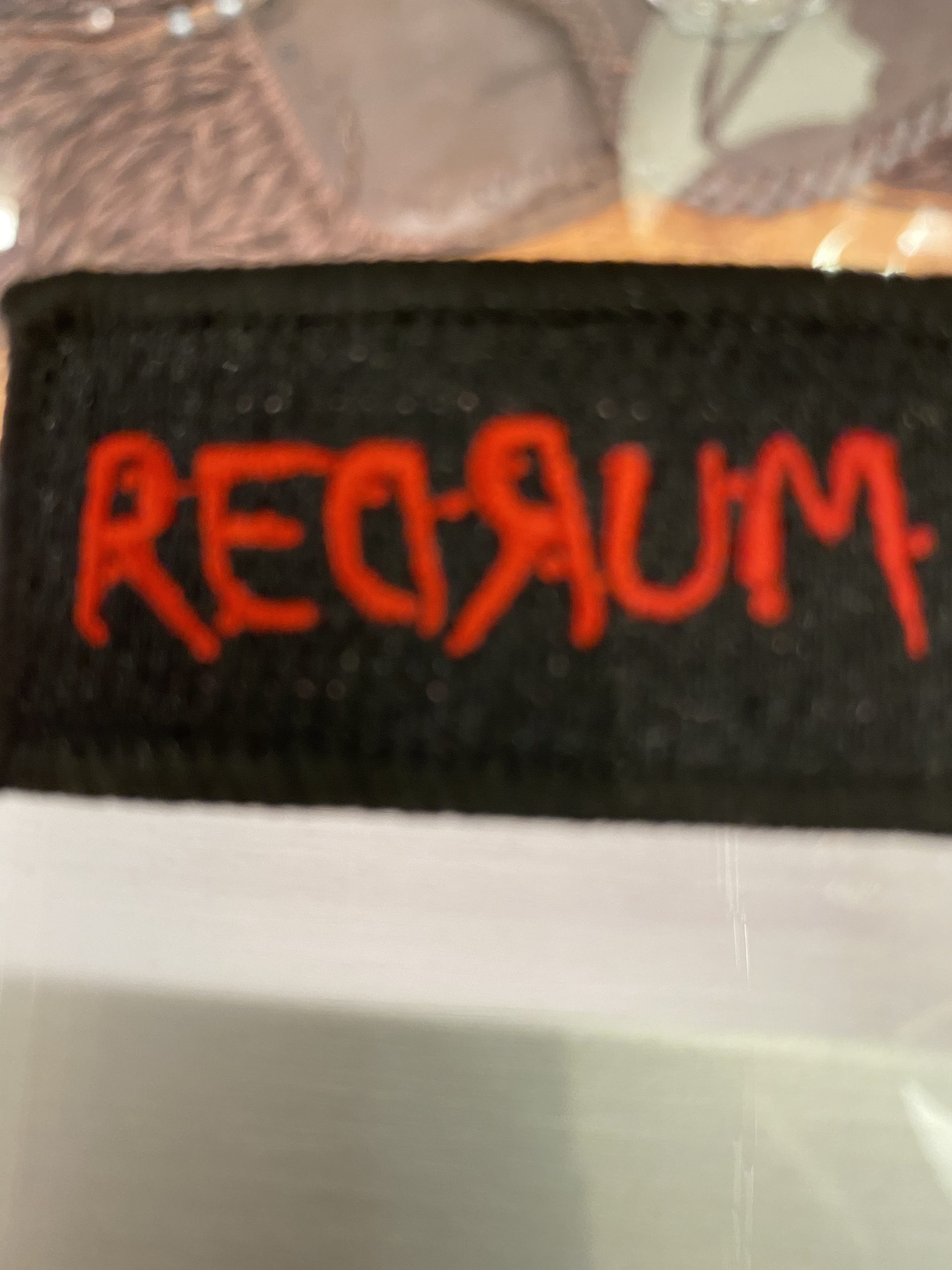 The hotel has also been featured on several TV shows about paranormal activity. Horror book writer Stephen King spent a night in room 217 and was creeped out to the point that he wrote The Shining afterwards. Legend has it that he and his wife checked in as the hotel was closing for the season. They were the only guests in the hotel. That night, he had a nightmare involving his son and that dream gave him the inspiration for the 1977 novel that later became a movie. The movie wasn’t actually filmed there, though. Room 217 reportedly has a library of King novels and it is very popular with hotel guests. The list of spirits that roam the building is staggering. There is even a dog ghost. Her name is/was Cassie. 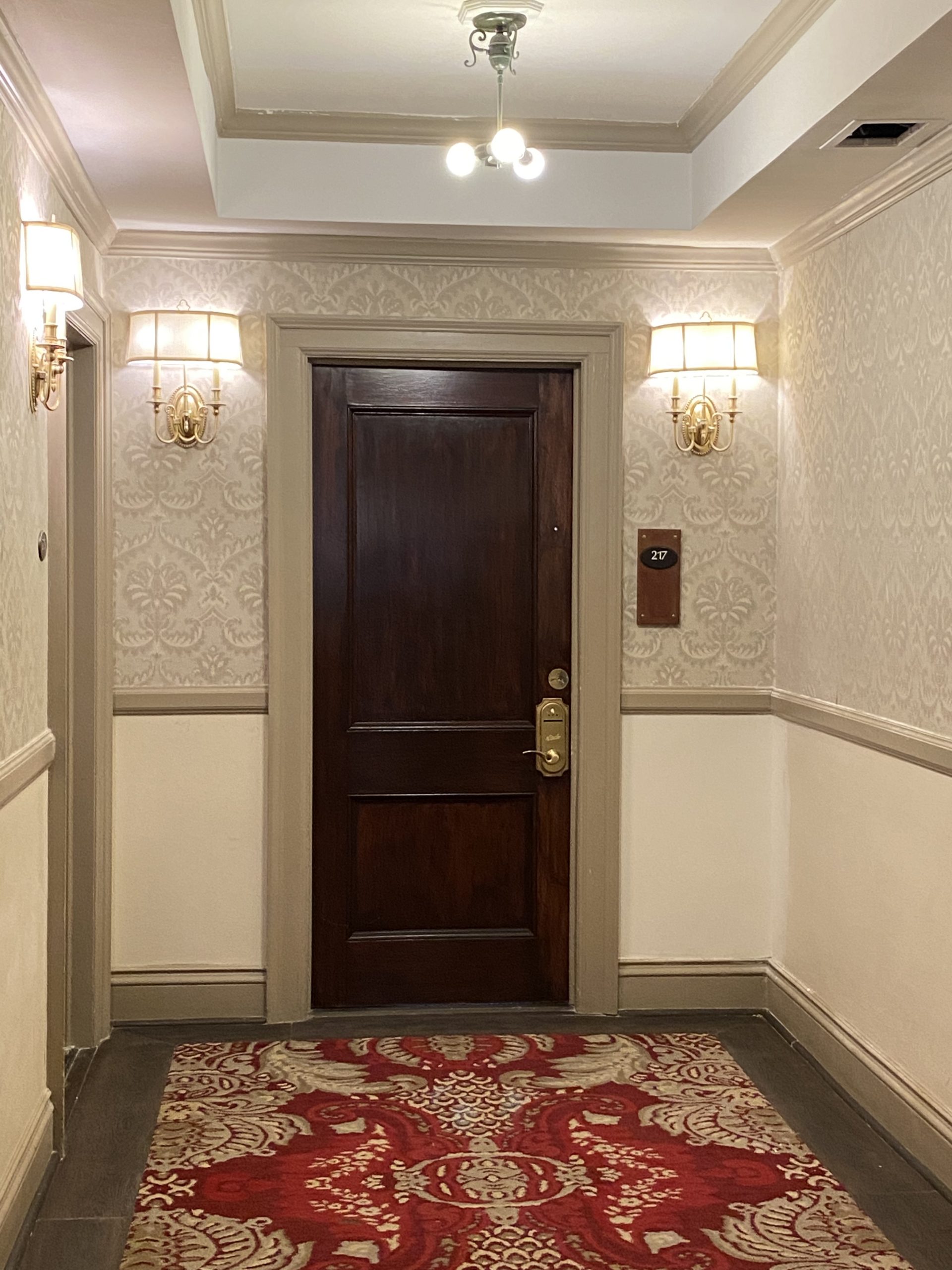 They have a hard time keeping the room number posted. It gets stolen frequently by a fan of The Shining.

So the hotel pushes poltergeists and musical performances because that stuff put heads in beds. But to our surprise and in our minds, the real story at The Stanley is the story of F.O.Stanley, the man who built the hotel. F.O. (Freelan Oscar) and his identical twin brother, F.E. ( Francis Edgar) were quite a pair. They started carving little animals and objects and selling them to their classmates in elementary school. They made their first violin at age ten. They went on to create dozens of concert quality violins and FO learned to play the instrument. Before long, they were inventing and marketing up a storm. They sold Eastman Kodak some technology that really sped up photography and made a ton of money on that. The twins invented the first steam powered automobile, appropriately called the Stanley Steamer. But FO had bad tuberculosis. His doctor told him that he needed to go to Denver if he wanted to live a few more months. He and Flora packed up and headed west. At the time, Denver was all about mining and the air quality there was horrible. His Denver physician, feeling terribly sorry for him, offered to let them use his vacation home in Estes Park for the few short weeks that FO had to live. At that point, he was coughing up alot of blood every day. So off they went to Estes park. After a few weeks, the physician traveled to Estes Park with a coffin on the back of his wagon, thinking that it was probably about time to go pick up FO’s body. He knocked on the door to his vacation home and Flora answered the door. He inquired as to the whereabouts of FO. Much to the shock of the doctor, Flora said she wasn’t sure; she said he was out hiking somewhere in the mountains. Obviously, the mountain air in the Rockies was just the cure FO needed. He went on to live a long happy life and died at the ripe old age of 92. Sadly, FE had an accident in one of the Stanley Steamers and died at an early age.

Flora told FO that she missed their home in Maine, and she thought he should build one for her in the same style there in Estes Park. He happily complied and the couple put down roots. It wasn’t long until he decided to invite a few friends out to Colorado. Sadly, there was nowhere to accommodate them. The only solution was to build a hotel. Needless to say, they chose to build in the style of the lovely old hotels along the Eastern seaboard. FO broke ground for The Stanley Hotel in 1907 and opened the doors to the public in 1909. It was the first totally electric hotel in the world and had over one hundred rooms, all with private baths. FO went on to be a leader in the town of Estes Park and was considered one of its greatest citizens. He believed that life should be spent in the service of others.

We left the tour with only a slight interest in the whole paranormal phenomenon. I guess we can be classified as agnostic on that subject. Regarding the hotel as a music venue, we were only lukewarm. But we left totally fascinated with the Stanleys and their accomplishments around the turn of the century. We are always amazed at how seemingly ordinary people accomplished great things back then. It just seems like the country was rather young and people were hungry and eager to make their mark. They truly saw the world as their oyster. We were reminded of the Wright brothers and countless other Americans who had great ideas and worked tirelessly to bring their visions and dreams to fruition. I guess Elon is our modern-day equivalent and I know that there are many more.  I don’t want to get on my soapbox, but it seems that we need less mindless screen time and more imagination.  Maybe that combination would make our future seem less scary.