“The Lowest Form of Existence”

Pay no attention to the title. Such slander! Sloths have been unfairly labeled with this insult since described in scientific literature in 1749. Actually, they were originally named after one of the Seven Deadly Sins. They have been the Rodney Dangerfield of the animal kingdom. They got no respect! But oh, how sloths have had a reversal of fortune! Sloths are indeed having their day in the sun. It’s easy to purchase toy stuffed sloths on Amazon. You can be snuggling with a stuffed sloth tomorrow or the day after. I’ve seen sloth decals on cars. Sloths are everywhere. They are the cool kids, the popular kids in high school in 2022. If the jungle had a lunch room, all the other animals would want to sit with them.  I think it must be because we all secretly envy their lifestyle. They have nailed the art of chilling. And that seems to be the only thing they do. Not completely true, but not far from the truth. But they have their reasons for the way they behave and one reason is their very poor eyesight. Plus, their bodies expend a lot of energy on food digestion. They must ferment the leaves they consume before they can digest them. Their stomachs have four chambers to get the job done.

We do have one thing to thank them for accomplishing. The next time you are enjoying avocado toast or a scoop of guac on a chip, thank a sloth. The ancient Lestodon, an extinct ground sloth, was the only mammal equipped with a GI tract capable of making short work of whole avocados and expelling the huge seeds. These huge sloths dispersed the seeds everywhere they went. They are credited with the survival of the tree, since otherwise, the seedlings that grew from avocadoes dropped from the original trees would have not survived in the shadow of the parent tree as they grew and competed for light and water.

Here is an evolutionary fun fact about sloths. It is believed that at one time, there were over eighty types of sloths. Most of them were ground sloths but there were a couple of marine sloths. In fact, they are darn good swimmers. They can move faster in water than on land. The largest of the land beasts, the Megatherium, stood over nineteen feet tall. They looked alot like dinosaurs, and you might be tempted to think, “Let’s just lump them all together in one big happy family,” but of course, dinosaurs were reptilian and sloths are mammalian, so that wouldn’t work.

Sloths are very strong, but you wouldn’t know it by just casually observing them.  They have about 30% less muscle mass than humans, but they can lift their bodies up with just one arm, even from the moment they are born. But they try not to overdo it. There is little doubt that they are the mammal world’s role model for taking it easy. They just hang out all day it a tree, only coming down about once a week for a poop, at which time they can lose about one third of their body weight. That’s a lot of, well, you-know-what.

But they are just so darn cute and you just want to cuddle with one. Personally, I would not even pet one after reading that their hair provides a home to an entire ecosystem of invertebrates. The sloth moth, for example, can be found no other place on earth and the fur of a single sloth can be home to as many as 950 moths and beetles. Makes me itchy-scratchy to think about it. But still, it’s worth noting that the fungi that helps them camouflage by making them appear green is showing some promise in curing a couple of types of cancer. I guess then the lowly sloth will finally get a little more respect!

But I still don’t want to hold one. I have made up my mind to love them from afar and from photographs. I hope you enjoy these snapshots I made in Manuel Antonio National Park, thanks to Luis, our eagle-eyed guide who could easily spot them way up in the trees. 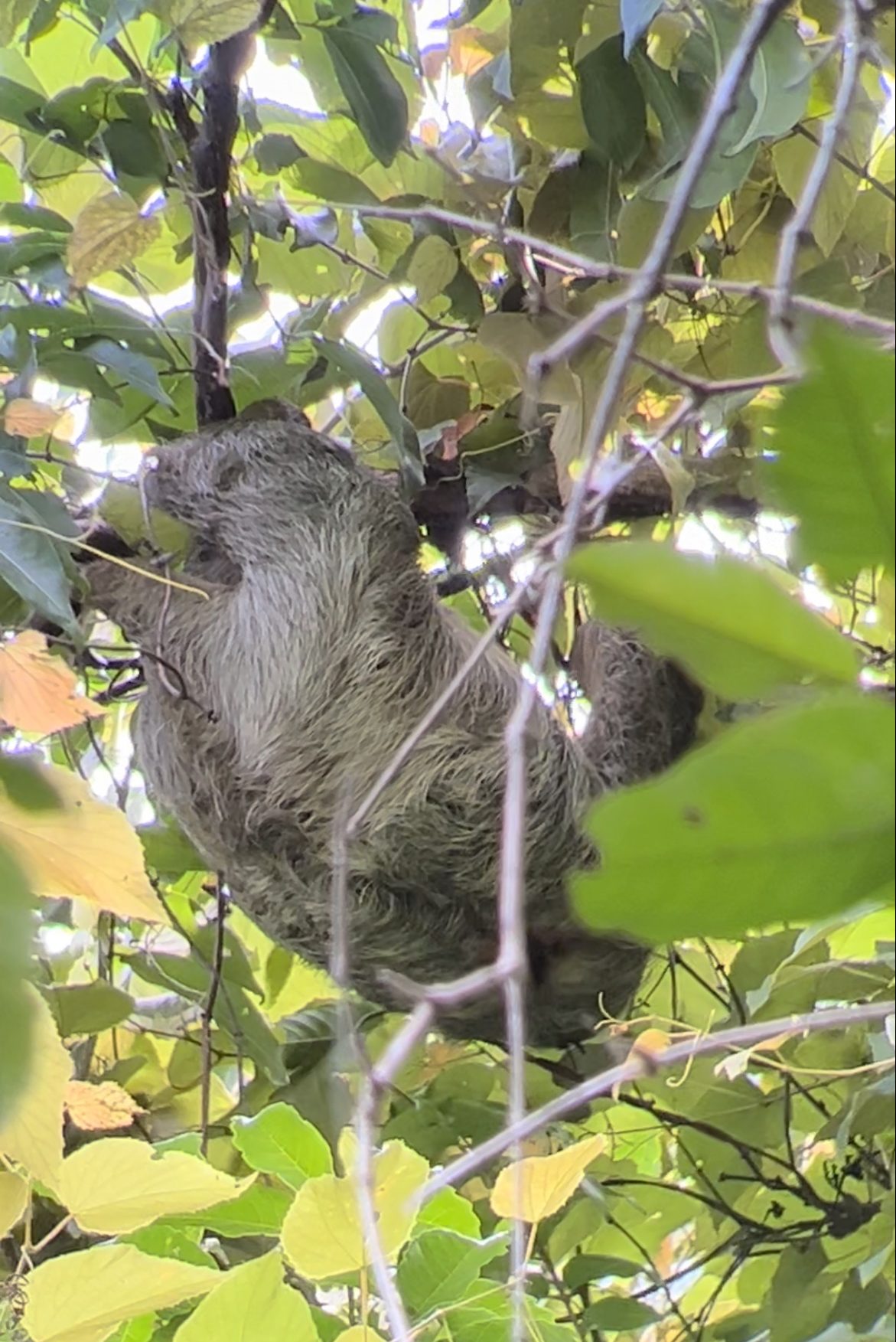 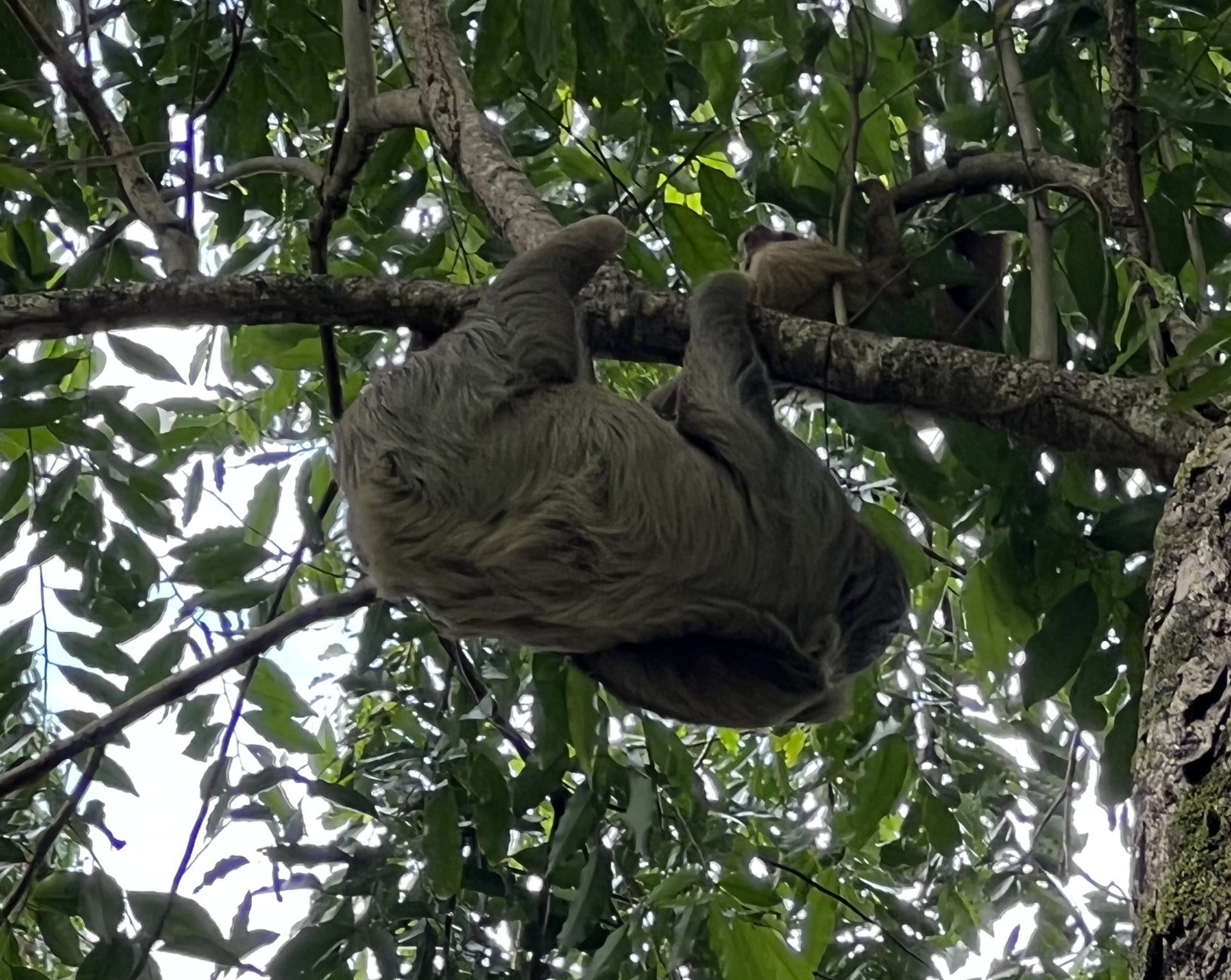 Check out the baby sloth above the mother! 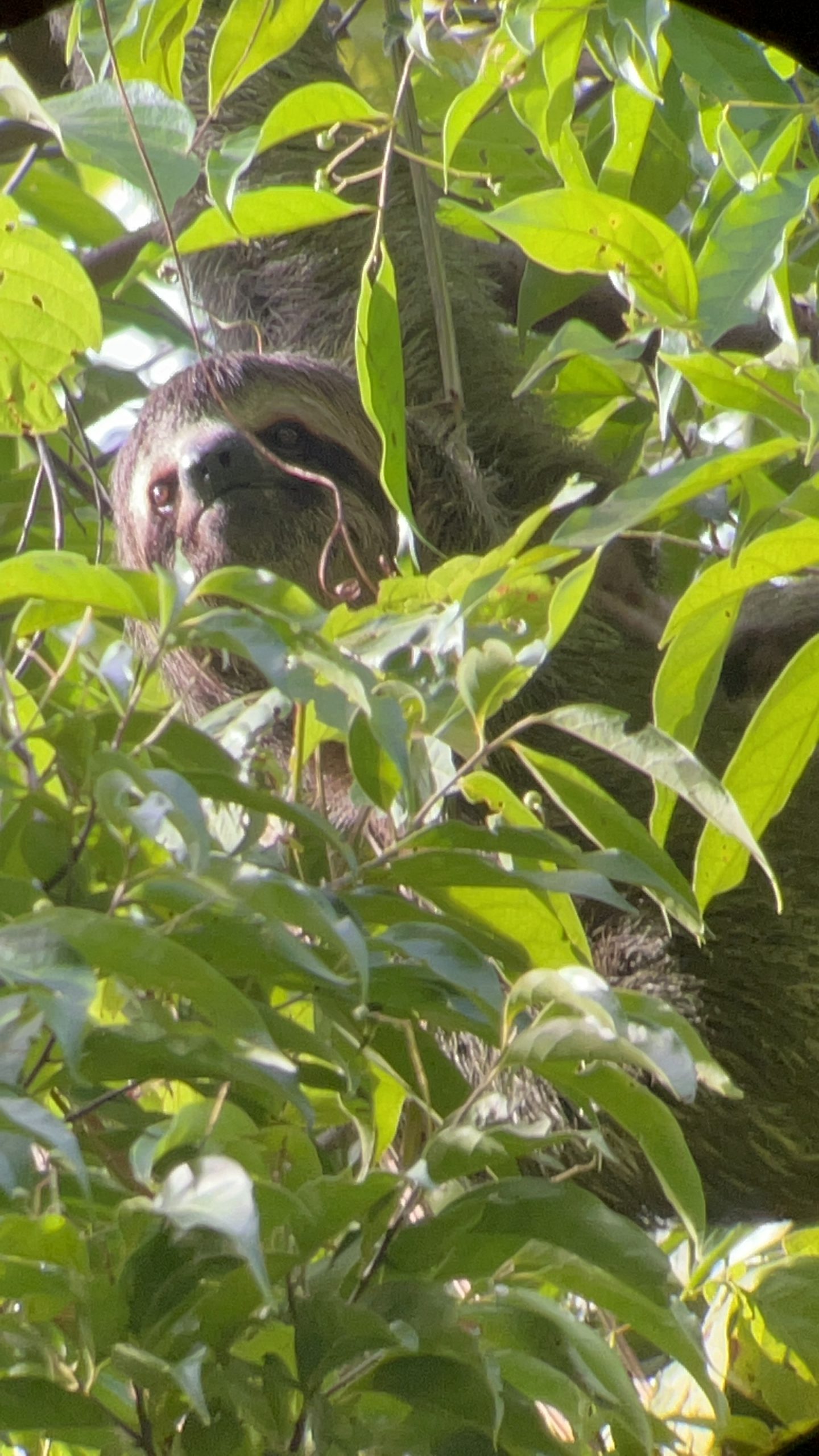