Droning On and On

“Then we put the juice in these barrels for a year . . .” Blah, blah, blah, yak, yak, yak . . . At this point, I feel myself drifting into a hypnotic state. Yes, I can sleep standing. I have done it many times on winery visits. I probably listened with interest the first few times, but I am so over these presentations. Probably everyone in the group feels the same as I do. But, just so you know, some people pay attention. Our winery lady was interrupted, and when she started again, she said, “Now, where was I?” Rick quickly said, “You were talking about the terroir.” Everyone else stared in amazement; not me, I expected nothing less from him. Anyway, the speech always seems to be the price you have to pay for a sniff, swirl, and sip. I endure them to get to the tasting part. It’s true that it is not very often that we have stood in the winery of a Grand Cru Classè Bordeaux wine, but the spiel is the same the world over.

Tuesday, we visited Château La Tour Carnet in Medoc. I understand that they are proud of their product and its storied past, so I just stood there politely and quietly ignoring all that boring droning on and on by the guide. Suddenly, I spotted a picture of a drone in use in the vineyard. Then I caught a glimpse of a picture of a robot going along the rows of vines. I immediately snapped to attention because this was new to me. Wait! Shouldn’t this information part of the talk? Finally something new and interesting to talk about! This could really wake up everyone!

It turns out that vineyards have been experimenting with drones and robots for a while now. They are having much success with finding and treating mildew early, long before it runs amok on the foliage. Sure, roses planted at the end of the rows have served as the traditional “canary in the coal mine,” I believe, but drones are the newest tool in the winemaker’s toolbox. The drones and robots can get down low and photograph the vines, the grapes, the soil, and the weeds. The photos can also be examined to assess drainage, missing plants, and any number of details that are crucial to the growers, not the least of which is pests. The drones can make an infrared map which helps the growers schedule harvesting when the grapes are at peak ripeness. The growers hope that the use of the robot will help them manage grass under the vines and between the rows. The robot can scoot along at about four km/hr. Yeah, I know that’s not much, but it’s a start. Plus, it can be tricked out with a variety of tools such as a mowing tool.

Yesterday, we were in Saint Emilion where we attended a premier wine tasting. We are on the right bank of Dordogne and the Gironde and the primary grape in their wines is Merlot, unlike the Medoc wines, which are primarily Cabernet Sauvignon. The name of the château shall remain anonymous. I asked the fellow pouring the wine if they employed drones in the vineyard. He gave me that withering French look that says, “You stupid woman. That is a ridiculous question. You should wait in the van!” However, I have learned that often that look means, “I don’t have a clue what you are talking about.” That was the case here, obviously. When I tried to tell him what I meant, he interrupted me, telling me that the château had been in the hands of “the family” for a century and they knew every centimeter of the vineyard and have no need for drones and robots. Smug little ______! I bet if we were to come back in about ten years, he would be acting like he invented drones.

A lot of work is going on to drive the technology from a novelty to integral part of viticulture. Battery life is one issue for owners of large estates. As with all things in France, there are laws for everything; believe it or not, even the first date that a grower’s grapes may be harvested is decided by a government agency. Also, there are laws concerning drone usage everywhere in the world, so these technical issues need to be ironed out, but when this happens, drones and robots will change not only viticulture, but all agriculture. With so many hungry people on the planet, I think that might be something everyone should wake up and get excited about. Even French wine pourers. 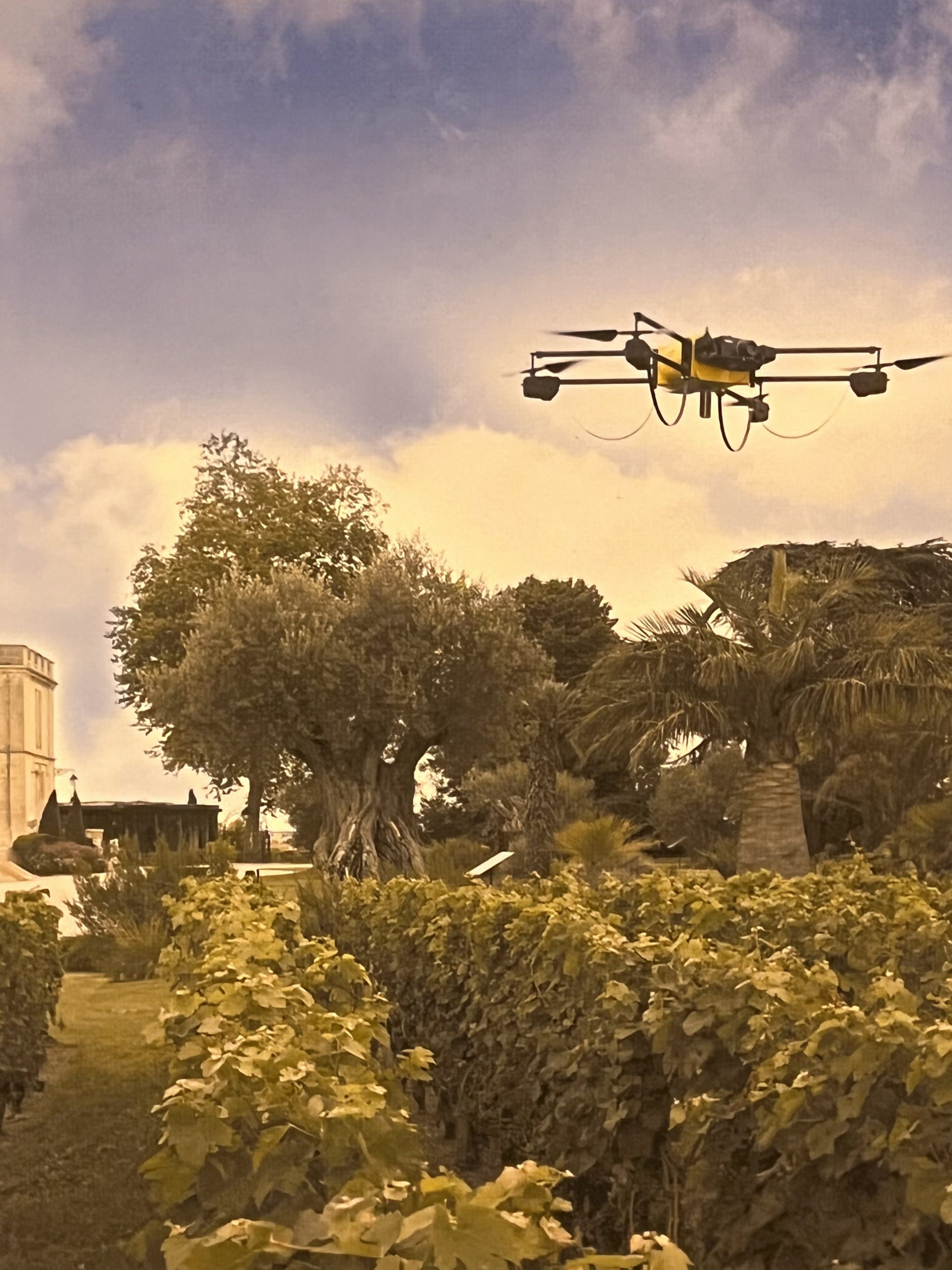 I have two pictures of pictures, one of a drone at Chateau La Tour Carnet and one of their robot. 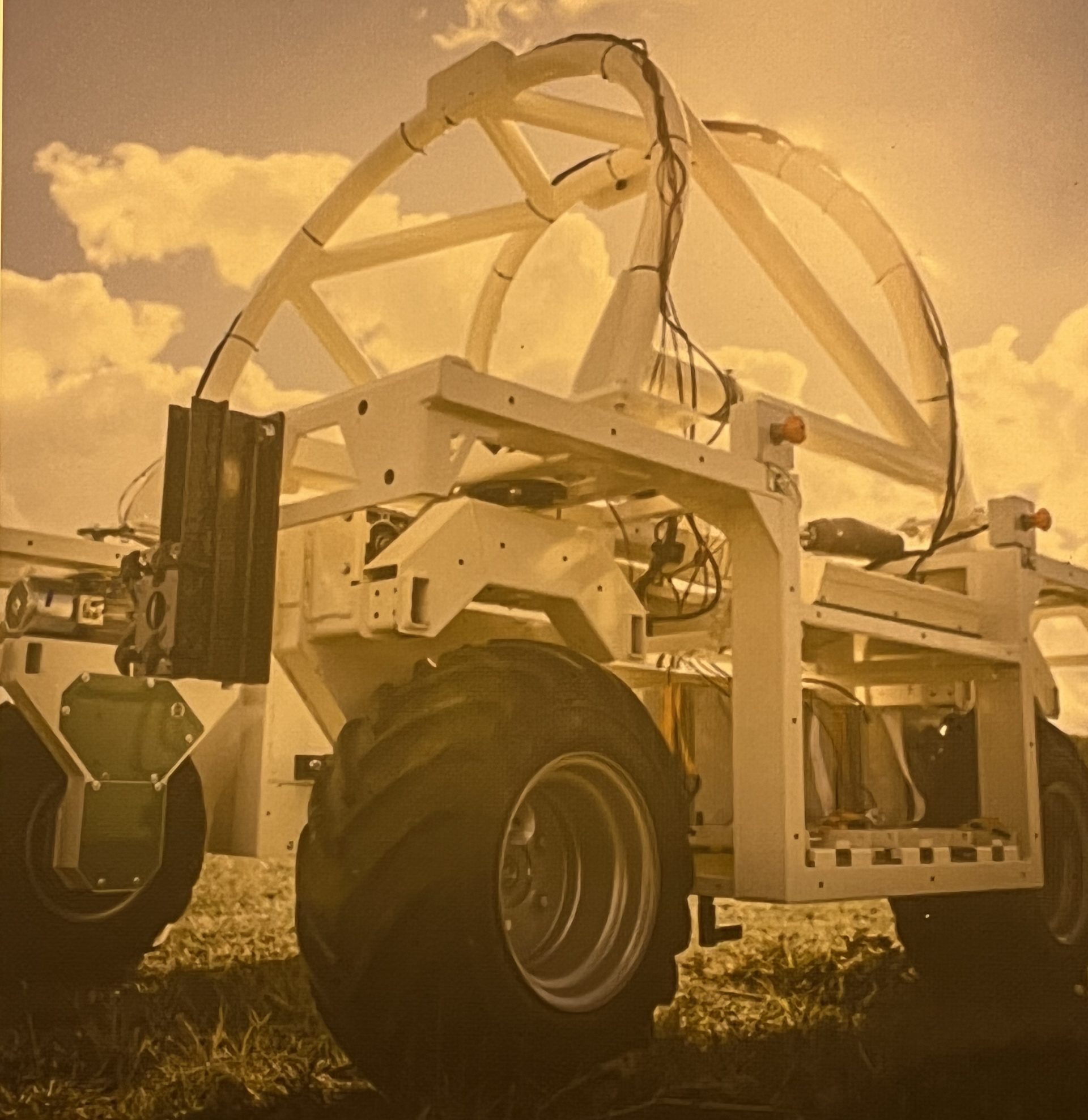