The world is full of museums. We’ve been told that Paris alone has between seventy and eighty. I’m sure lots of them are serious and legit, but some of these museums can only be called quirky. Probably the quirkiest museum we’ve ever seen anywhere in the world is the Icelandic Phallological Museum. We tracked it down when we were in Reykjavik. We stared at the window display, slack-jawed and bug-eyed, but just couldn’t bring ourselves to step inside. I understand that they have moved to a new, larger location and now have three times the number of phallological items than they had displayed before, easily becoming the world’s largest collection. One hundred species of mammals have their manliness represented inside, but they no longer have a window display to entice passersby to enter. It’s probably just as well. As often happens, I’m already off topic, so let’s get on to Edith. 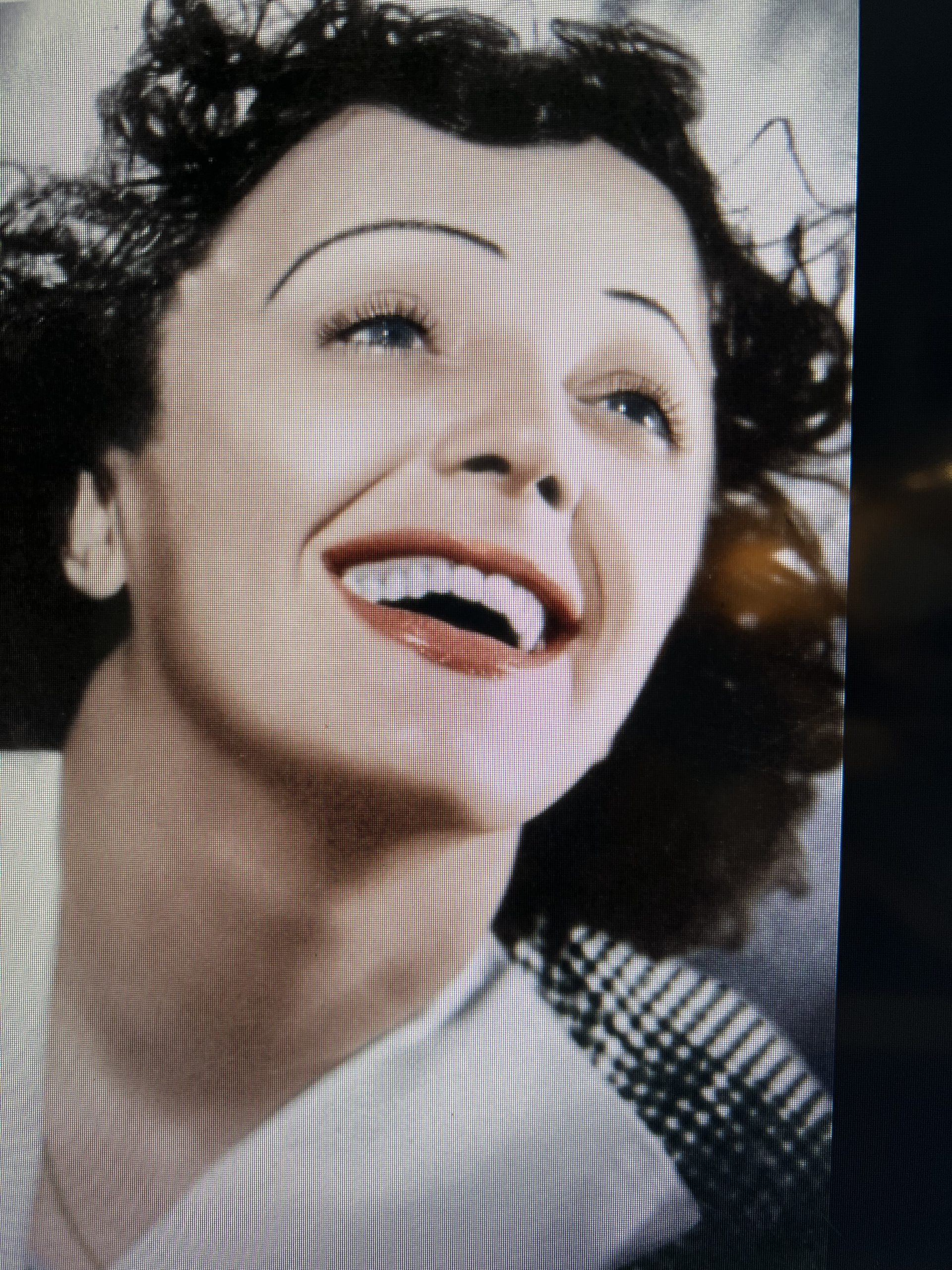 It seems that many times, a person’s obsession with another person or random subject fuels them to build a museum. Sometimes these seem like more like shrines dressed up and called museums. That may or may not be the case with the Museé Édith Piaff, I don’t know, but we thought it sounded irresistible and wanted to visit when we were in the area. Not that we were really “in the area.” The museum is in the eleventh arrondissement; our hotel is in the sixth. But we always think of her rendition of “La Vie en Rose” as the quintessential French song, their unofficial national anthem, so we thought it would be rather fun to pop in and pay a visit to this little museum honoring her life. The museum is in the apartment belonging to Mr. Bernard Marchois. I have read that Edith once lived there. He met Edith at the age of sixteen and has been a loyal fan since. He has a very personal collection of her belongings including furniture from her apartment. With her music playing in the background, you can peruse private letters and memorabilia, even her signature black dresses. It’s free to visit, but you have to make an appointment. Sadly, it was under renovation when we were in Paris, so we were unable to visit. We had to console ourselves by playing Louis Armstrong’s version of “La Vie en Rose.” We like his lyrics much better anyway. It’s a musical French kiss.

Edith had a sad life. She was born in 1915 and her mother abandoned her at birth. Her father was a circus acrobat. Her grandmother took her in and raised her in a brothel. She supposedly contracted meningitis at age three and became blind for the next four years. She gave birth to a daughter in 1932, but tragically, the child died of meningitis at age two. A lover, middleweight boxer Marcel Cerdan, died in a plane crash when he was traveling to see her. She was involved in a series of terrible automobile accidents. Alcohol and drugs took their toll on her body and mind. She died at age forty seven, reportedly of liver cancer.

Still, she was much loved by the people of France. They embraced her sobriquet, “the little sparrow,” that as given to her by a cabaret owner, because she was a tiny thing with a beautiful voice that reminded him of birdsong. In fact, she adopted the name professionally. Edith was indeed a little bird, standing not even five feet tall and barely weighing ninety pounds. The French population loved her passionate singing and her songs often reflected her life of pain and loss, probably topics with which many of the French citizens of the time could identify. Her death was mourned by the whole country; thousands of fans lined the route of her funeral procession and we were told by our guide that one half million people crowded into Pere Lachaise Cemetery for her funeral. Her grave continues to draw fans daily. They leave flowers, money, and letters. We stopped at her grave and hummed a few bars when we were there. I wanted to put a link here to the YouTube official version and the Louis Armstrong version, but that’s above my pay grade. They are easy enough to find with a quick search. Our guide played “Non, Je Ne Regrette Rien” on his phone. I can’t share any pictures from the museum, but here’s a photo of her grave. 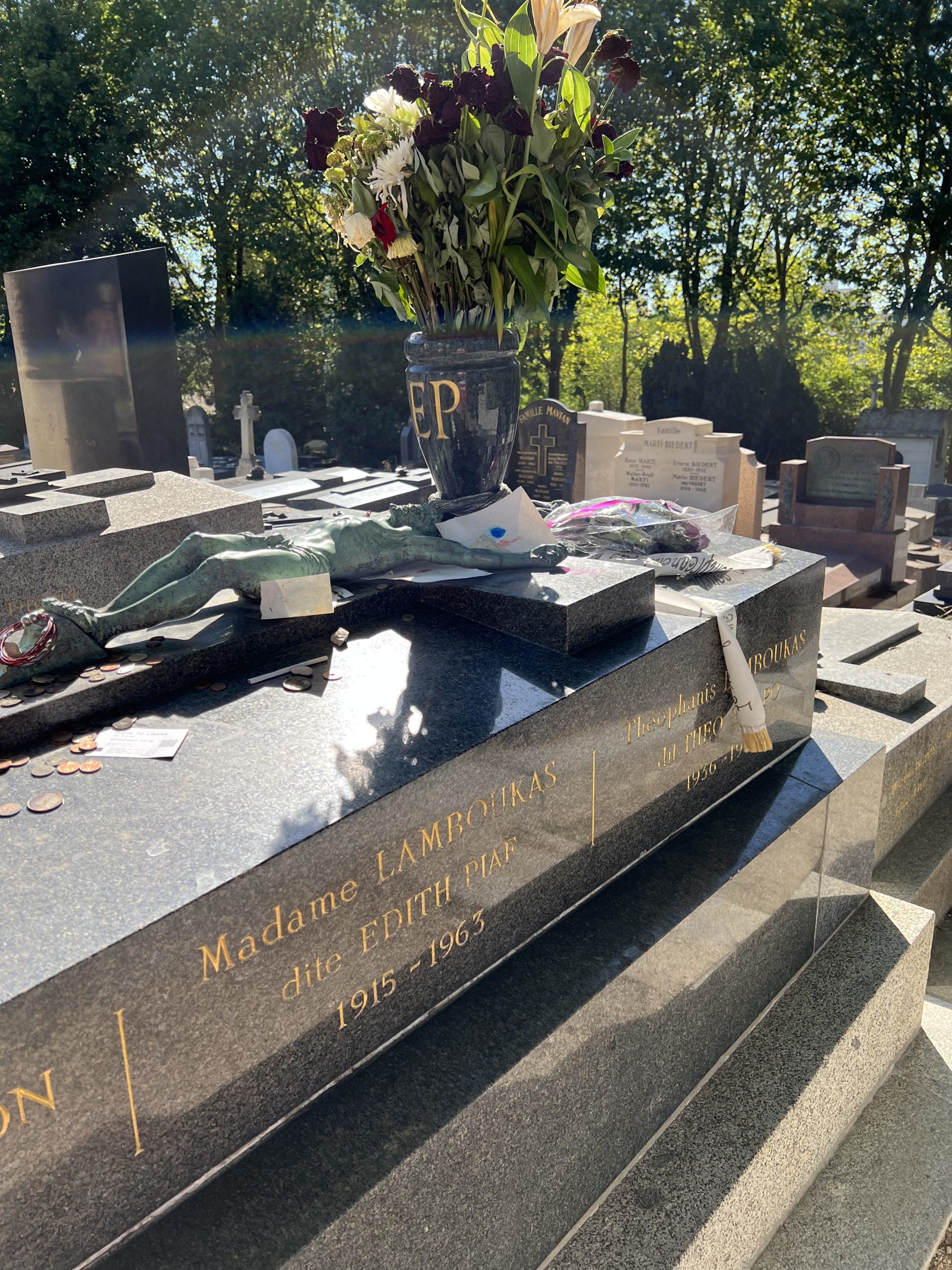