The World’s Most Visited Necropolis

Touring a cemetery with a guide might seem like an odd way to spend a morning, but Père Lachaise isn’t just any old boneyard. It is the world’s most visited cemetery and way up on the list of the world’s most beautiful cemeteries. We spent a chunk of time in Bonaventure Cemetery in Savannah a few years ago and thought it was beautiful, and I’ll admit that we dropped in for a visit at Recoleta in Buenos Aires many years ago. We wanted to see Eva Peron’s grave. It was pretty ostentatious. I remember seeing the cemetery in Cairo and hearing how homeless people lived among the tombs and graves, but we didn’t actually visit. I read recently that a half million people live in the mausoleums and around the graves in the City of the Dead. But Cairo is a city of over twenty million people, so I guess that number of homeless isn’t that out of proportion, but what do I know? Well, not all that much, apparently. I just found out the difference between a graveyard and a cemetery a few years ago when someone brought it to my attention that a graveyard was attached to a church and a cemetery is not. OK. Got it. Hey, anybody remember Boot Hill on Gunsmoke? That was a cemetery, not a graveyard. My parents were interred on a treeless patch of dusty land just steps from the front door of the rural church in which they were married. Graveyard.

But today we are talking about Père Lachaise and it’s a garden cemetery in a class by itself, thanks to Napoleon I. Here’s the backstory: Paris was getting crowded and Napoleon wanted to boot the dead to the outskirts of town. He thought it much easier to shove the dead out of town than to force the living people to move. The city desperately needed to make room for a growing population. He had an architect draw up plans for a beautiful garden with lots of large sculptures scattered around the rolling hills of the cemetery, which is about one hundred ten acres in size. But at first it was considered too far from Paris and people were resistant to burying their loved ones so far from the city center. I suppose that was back when people visited graves often and they didn’t want to have to travel so far from home for a visit with their dearly departed. Plus, there were religious conflicts. Christians didn’t necessarily want to be buried with non-Christians, Jews didn’t want to be buried with Muslims. You know, the usual conflicts. They finally said to heck with it and made the place non-denominational. That didn’t make anyone happy, either.

A five-year-old girl was buried at Père Lachaise in 1804 and the people in power readied themselves for an onslaught of funerals. Didn’t happen. Honoré de Balzac wrote glowing articles about Pere Lachaise for the newspapers thinking this would help, but the officials realized that they needed some famous people to draw the masses out of the city. They decided to move the remains of well known recently departed citizens, which they did with much flourish. They moved Molière and La Fontaine as well as the lovers that the French consider their Romeo and Juliet. That did the trick. Père Lachaise funerals became all the rage because the ordinary citizenry loved the idea of being buried in close proximity to famous people. As the saying goes, the rest is history.

Even though there are somewhere north of one million souls interred at Pere Lachaise, there are actually still funerals there, but the rules for admission are strict. Also, like many cemeteries in European countries, you don’t get the space for all eternity. You get about thirty years, then it’s time to pack up the bones and move along to make room for the next in line. But I think if your family maintains your grave, you can keep it. If they let the upkeep slide, the cemetery sells your two square meter resting place and what’s left of your mortal remains is removed to make room for another at the current rate of fourteen thousand Euros. Our guide says the rate goes up yearly.

Although we wandered all over that cemetery for two and a half hours visiting lots of famous graves, I am going to try to limit the number of photos. It seems weird to say that I hope you enjoy, so I will just say that I hope you recognize these names. 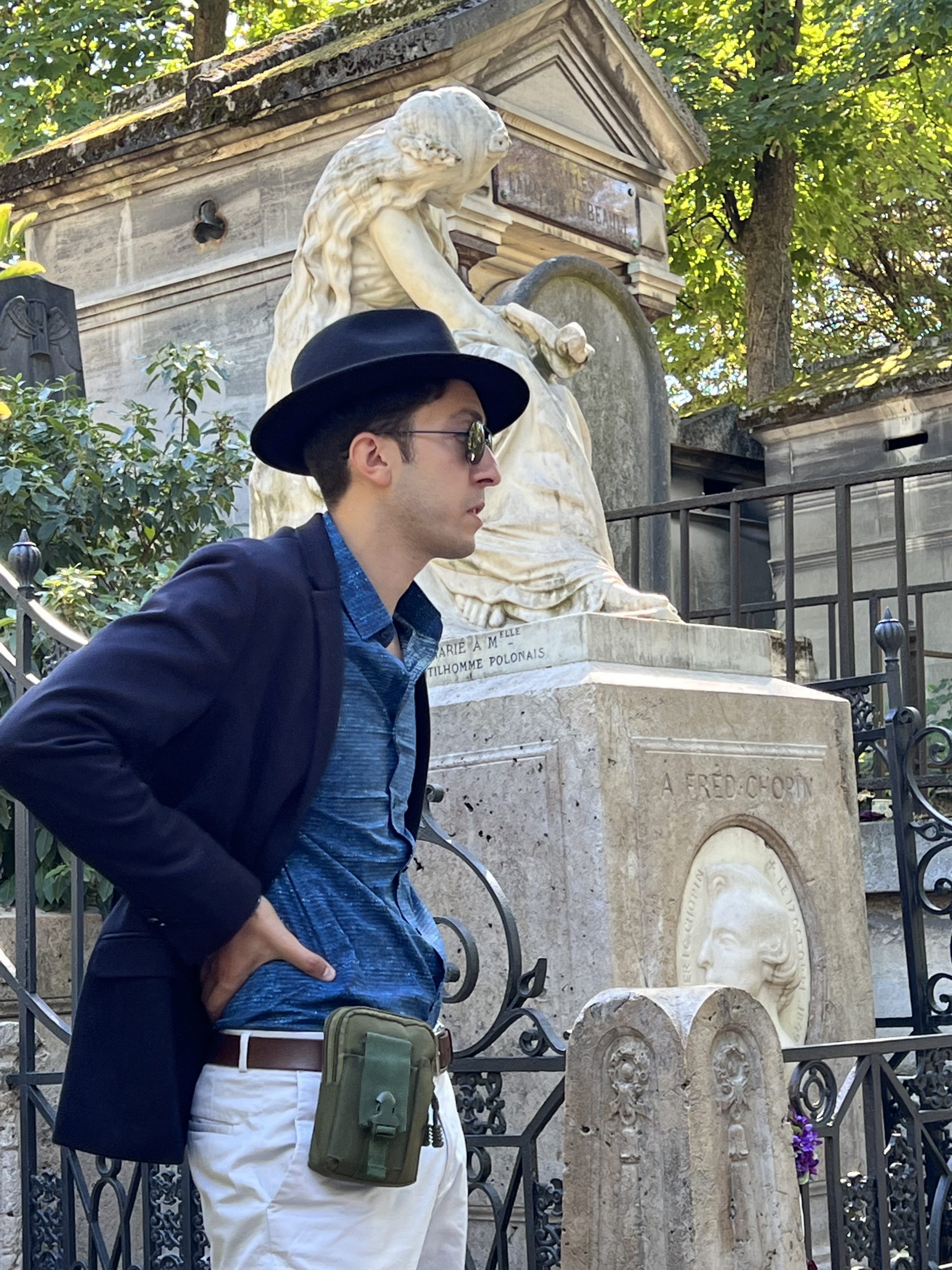 Our guide at the tomb of the incredible Polish composer, Chopin. 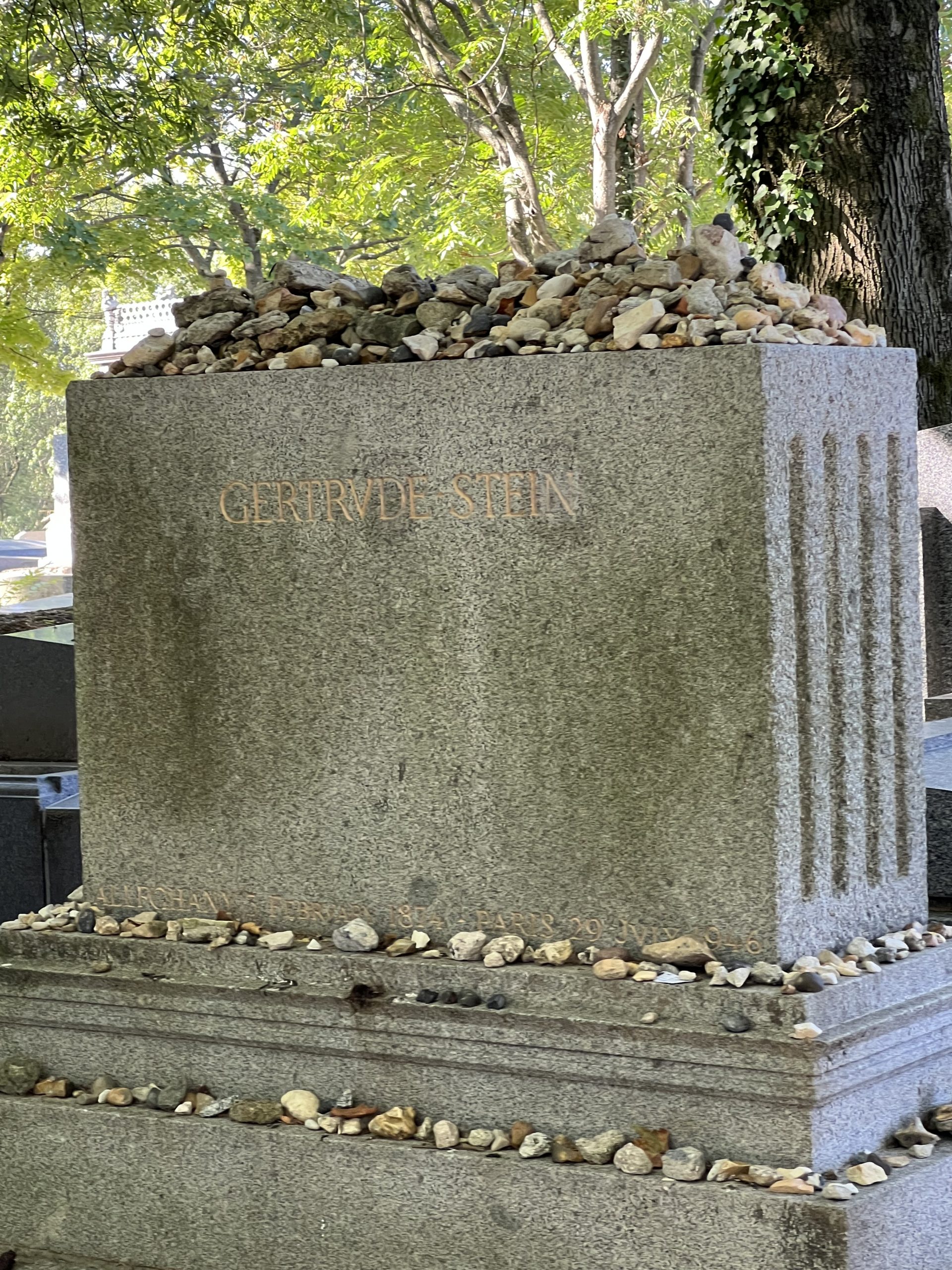 The grave of Gertrude Stein. Her lover, Alice B. Toklas, is buried there, too, but her name is on the back side of the grave stone. 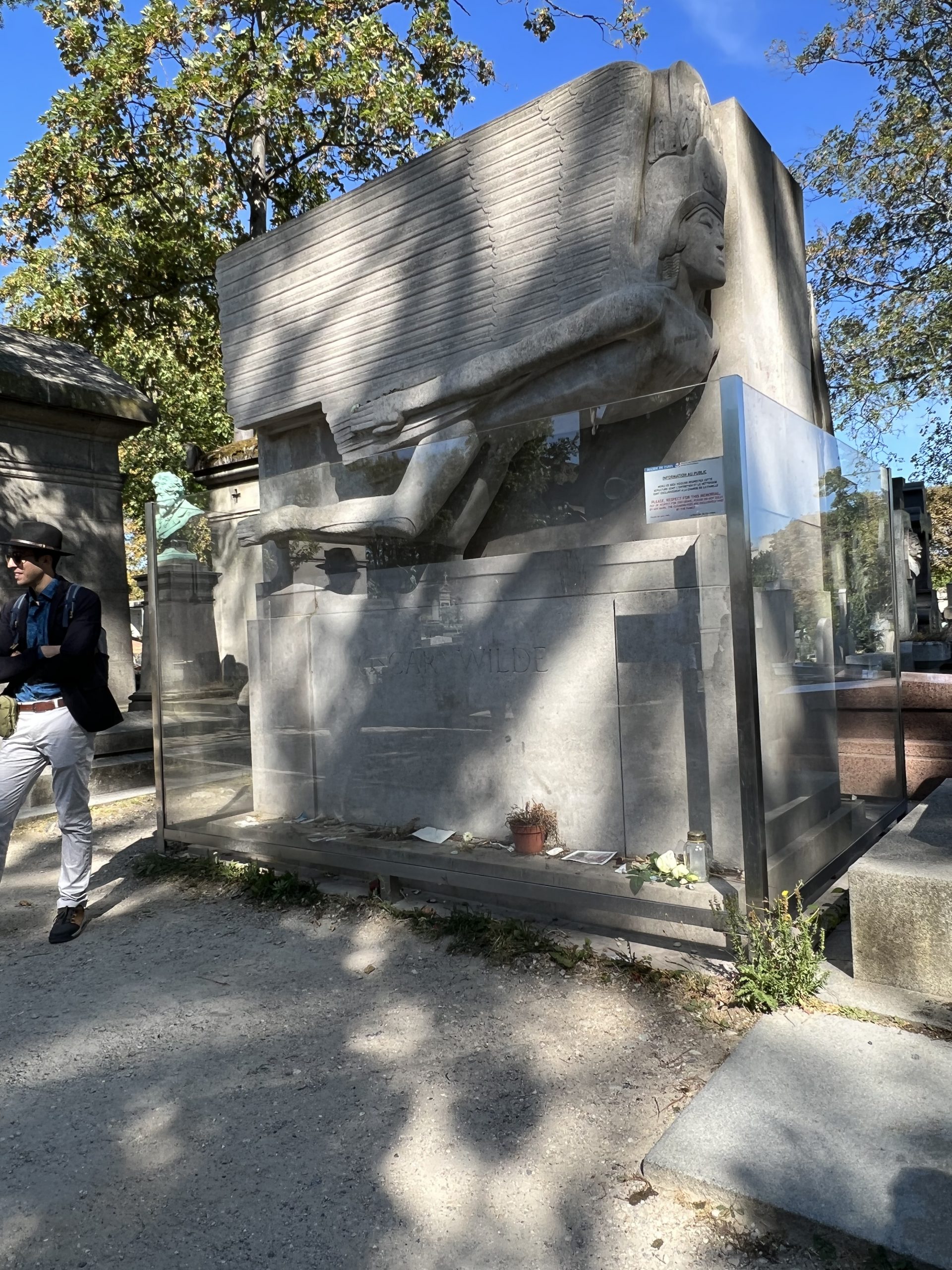 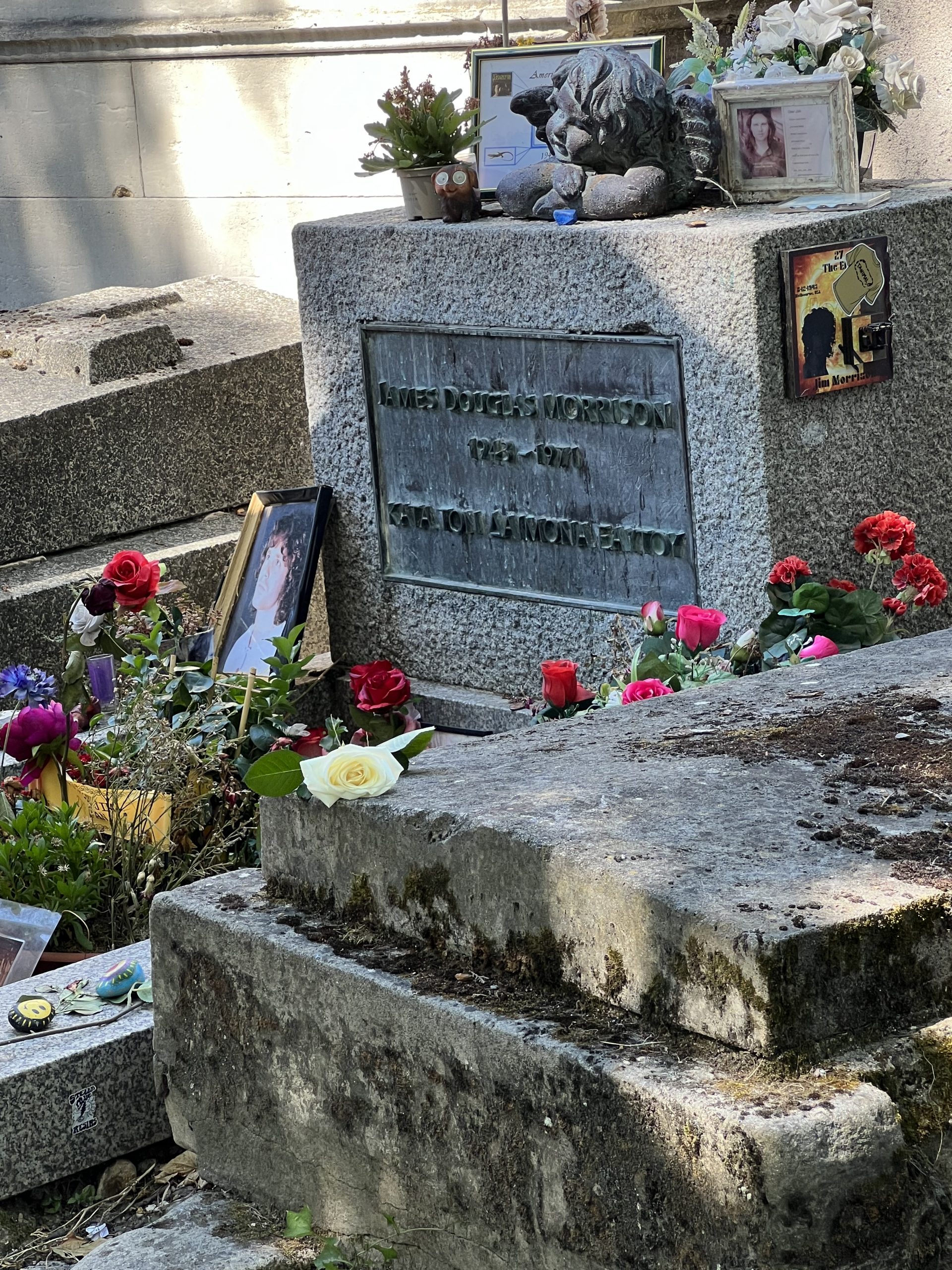 Arguably the grave most recognized by Americans at Pere Lachaise — the grave of Jim Morrison of The Doors.