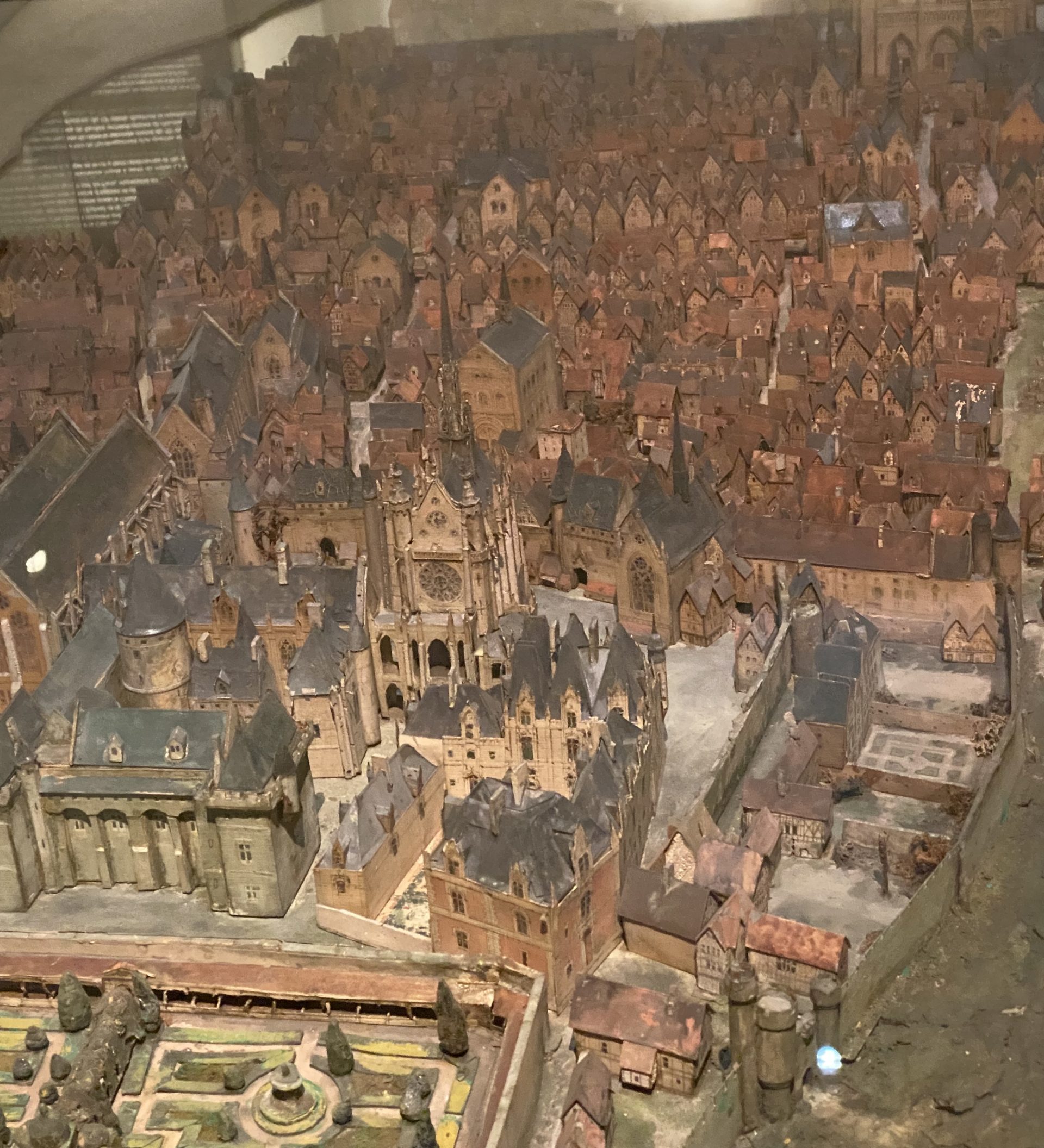 Model of Paris “pre-Haussman” at the Musee Carnavalet.

There is just something about Paris that makes your heart beat a bit faster and takes your breath away. It is truly the most beautiful city in the world. Of course, no city’s beauty can compare to a mountain vista, but if we are talking about the most beautiful cities, the City of Light wins easily. It’s a slam dunk. No contest. Budapest has that incredible House of Parliament. Oh, my! Consider Roma and Firenze: spectacular, no argument. And you can’t talk about beautiful cities without mentioning Venice, now can you? Many cities have beloved iconic buildings that everyone recognizes, London, for example, with the London Eye and Big Ben. But for shear beauty street after street, allée après allée, you gotta give it to Paris.

For some strange reason, Rick and I love architecture. Although we can’t tell a Doric column from a Corinthian column, we find the art of architecture fascinating. We’ve traveled all over the USA visiting Frank Lloyd Wright structures and even visited a bar in Tokyo that was designed to pay homage to a bar in a FL Wright-designed hotel that was knocked down. We’ve taken architectural tours in large cities like Chicago, so it was not out of character that when we were in Paris in December, I decided that I needed to know more about how Paris got that iconic “Paris look.” I quickly found that I needed look no further than Napoleon III and a man named Georges-Eugène Haussman. While we were in Paris that week, we went to the Musée Carnavalet. This museum, founded in 1880, is the museum of the city of Paris. They have a wonderful model of Paris “pre-Haussman.” Isabelle, our Parisian guide that day, suggested that perhaps this museum was founded in an effort to appease the masses who hated Haussman for what he did to Paris. By Haussman’s own estimation, some 350,000 Parisians were displaced by his projects over seventeen years as they swept away the hovels and replaced them with large buildings that were all built in the same style, thereby giving the city it’s iconic, uniform look. The results that we see today are nothing short of magnificent. There is no doubt that many people had their lives turned upside down when Haussman came through like a tornado. Oh, and speaking of natural disasters, it is worth noting that no other city in the world has ever been torn up and rebuilt. Yes, cities are often rebuilt after an earthquake, fire, or other disaster, but never before had a city been destroyed and rebuilt like Paris was under the direction of Napoleon III and Haussman. Later, other cities would copy Haussman’s ideas for broad boulevards and parks. Even Chicago incorporated some of Haussman’s concepts for street designs in its 1909 city plan and Fredrick Law Olmstead was influenced by Haussman’s designs.

All this reconstruction was not without a great deal of controversy. In fact, Haussman was eventually forced to resign because of his extravagance. But Napoleon III insisted that he was driven by a desire to improve the lives of the people of Paris by designing Paris so that sunlight and fresh air could reach the city streets and the residents could enjoy the beauty of the city’s landmarks and parks. He wanted a park within easy walking distance of every Parisian. His plan was to build a park in each of the eighty neighborhoods of the city and that part of the plan met with much approval from the citizens. The broad boulevards are lined with trees and buildings with essentially the same façade and are indeed beautiful. Critics dismissed the changes to the street design as the emperor’s effort to redesign the city streets. Cynics thought he wanted to quell popular uprisings for which Parisians were famous. The mid-nineteenth century French citizenry had a penchant for their large protests and often built massive barricades in the streets of the city. The cramped and crowded inner city only facilitated the rioting, but the broad boulevards made it easy to send in the military as needed. Still, facts be damned, but there is no denying that the city was greatly improved by Haussman’s work. The city’s water system was vastly upgraded by a new aqueduct and the sewer system was totally overhauled. Gas lines were installed, providing Paris with thousands of its famed streetlights.

To learn more about Napoleon III and Haussman and their role in reinventing Paris, I searched high and low (read: I went online) until I secured a guide that would take us on a walking tour of Haussman’s Paris. We also listened to a book entitled Paris – City of Dreams by Mary McAuliffe. I’ll readily confess that the book gave us a bit too much information, but the tour this week was just perfect. Brad, our fav expat tour guide in Paris, took us all over to see the results of the Haussman years. I quizzed him about something we were told in Bordeaux by our excellent tour guide, Astrid. I mentioned to her that much of Bordeaux had that “Haussman look.” She said that was easy to explain. Haussman was an assistant prefect in Bordeaux before he was tapped by Napoleon III to lead the renovations in Paris. Haussman was a big admirer of the architecture of Bordeaux, which was done about one hundred years earlier, so when he went to Paris, he knew what changes he wanted to see. He was a man with a plan and nothing stood in his way. I will post some pictures of this beautiful city for you to enjoy. 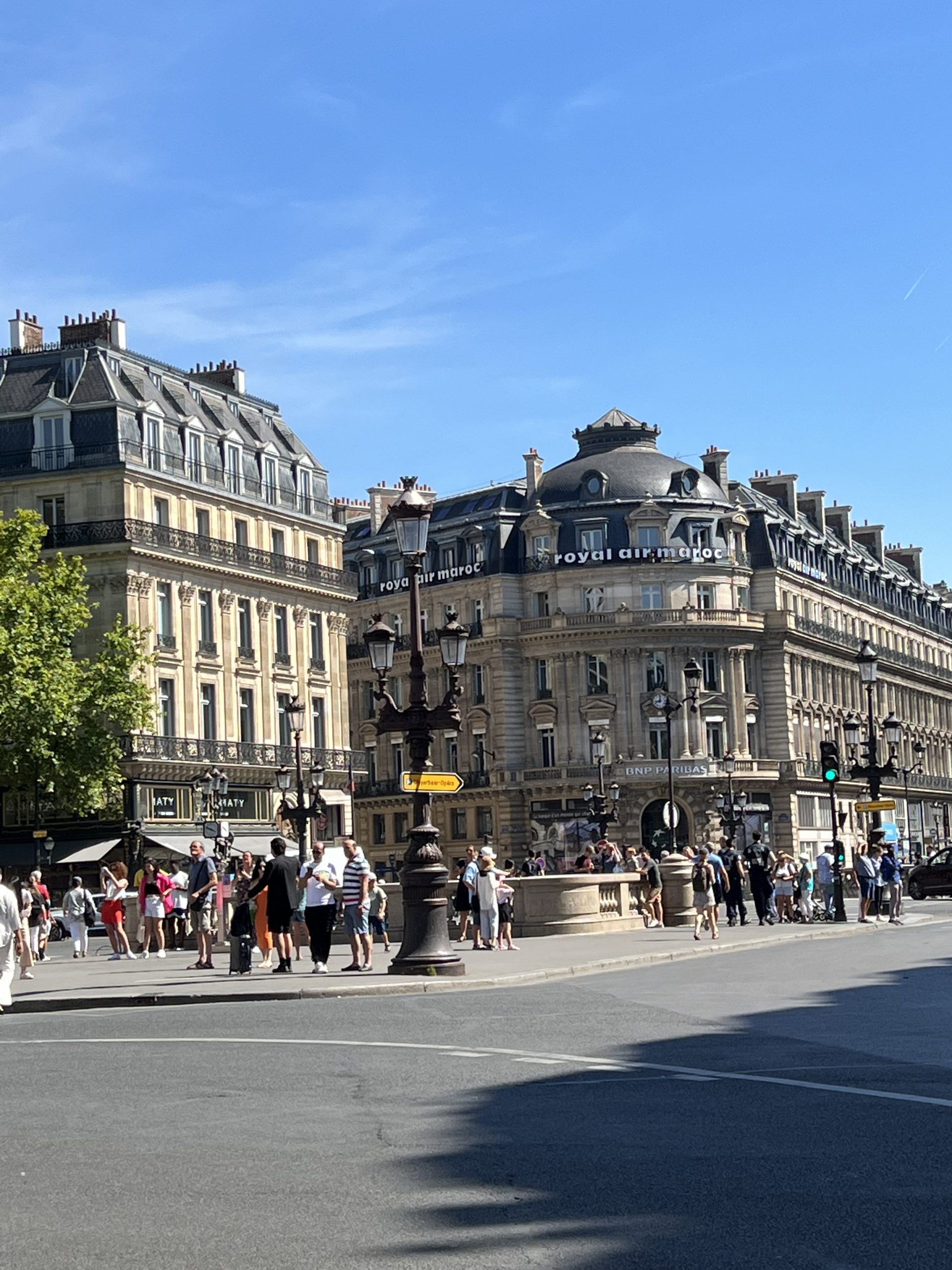 Lovely use of wrought iron balcony railings and mansard roofs. 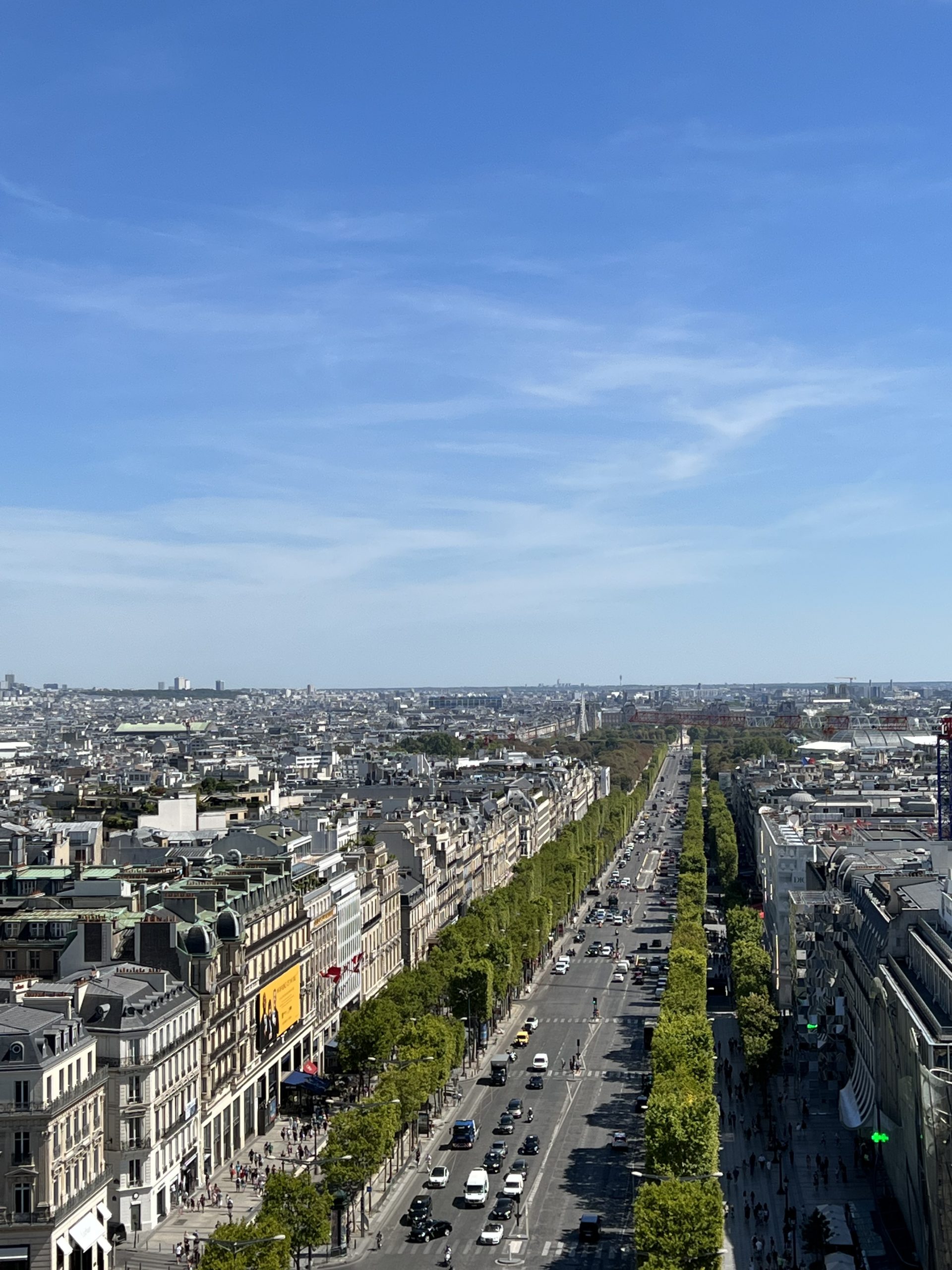 Love the wide tree-lined boulevards that are characteristic of Paris. 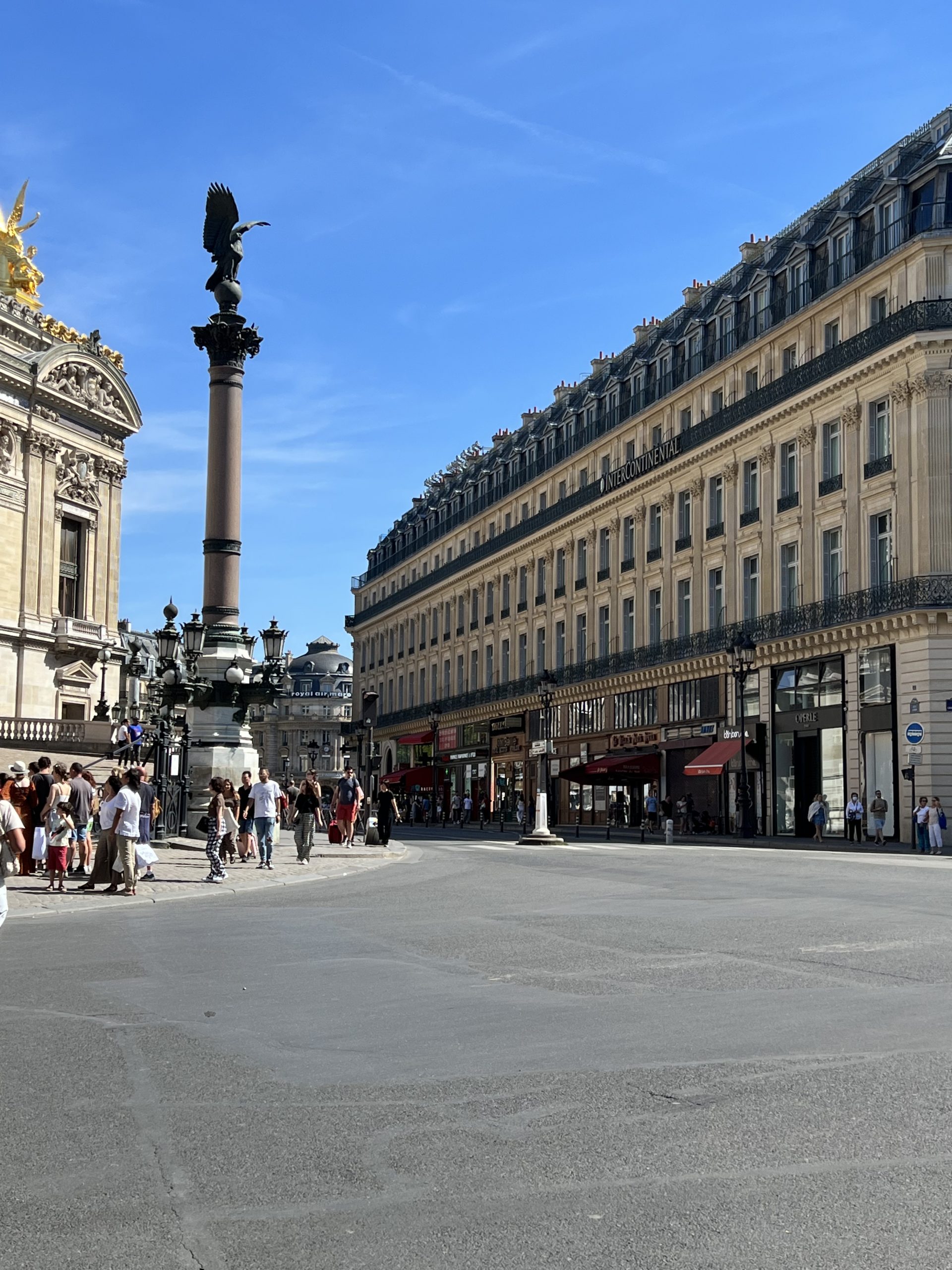 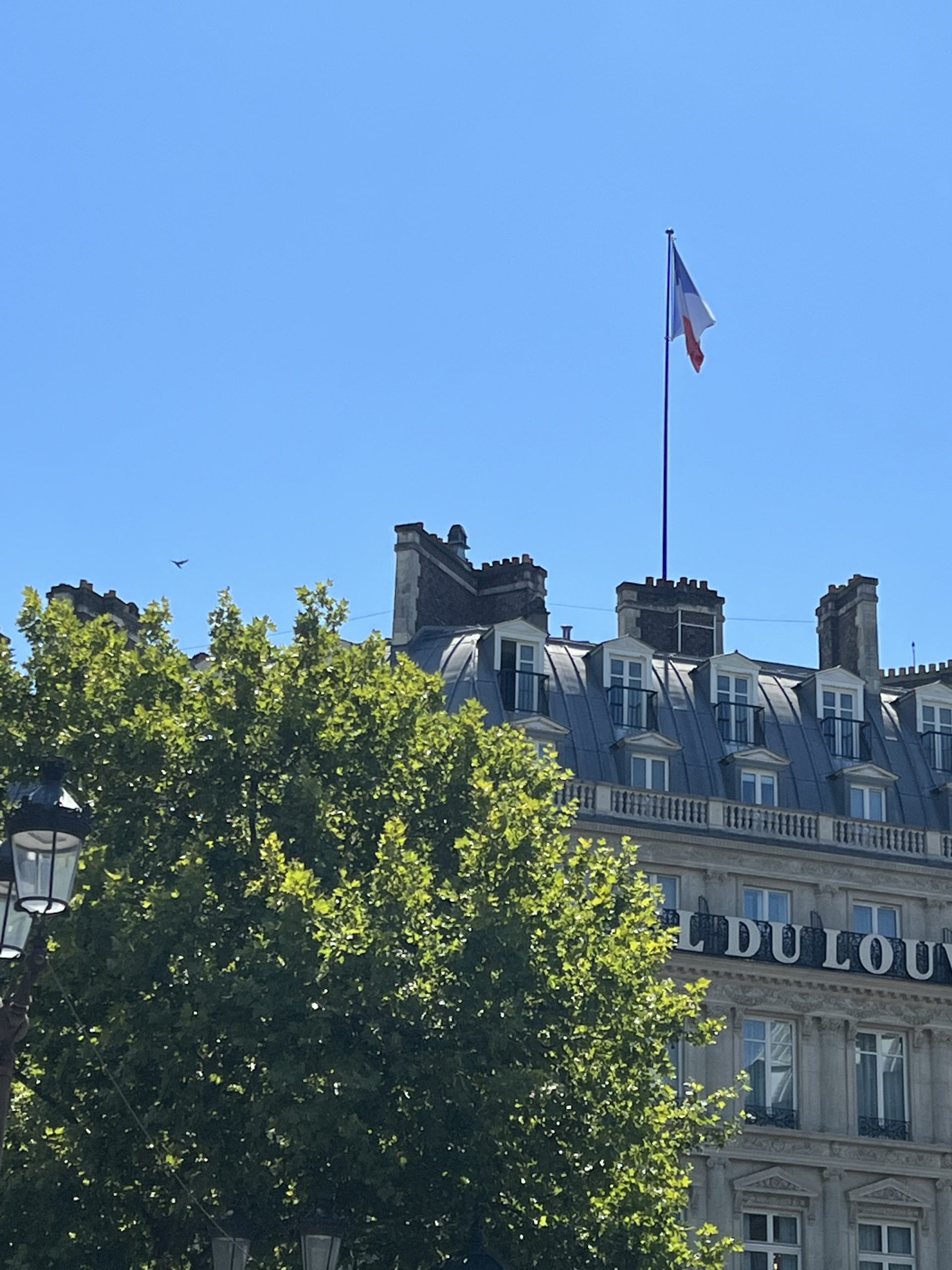 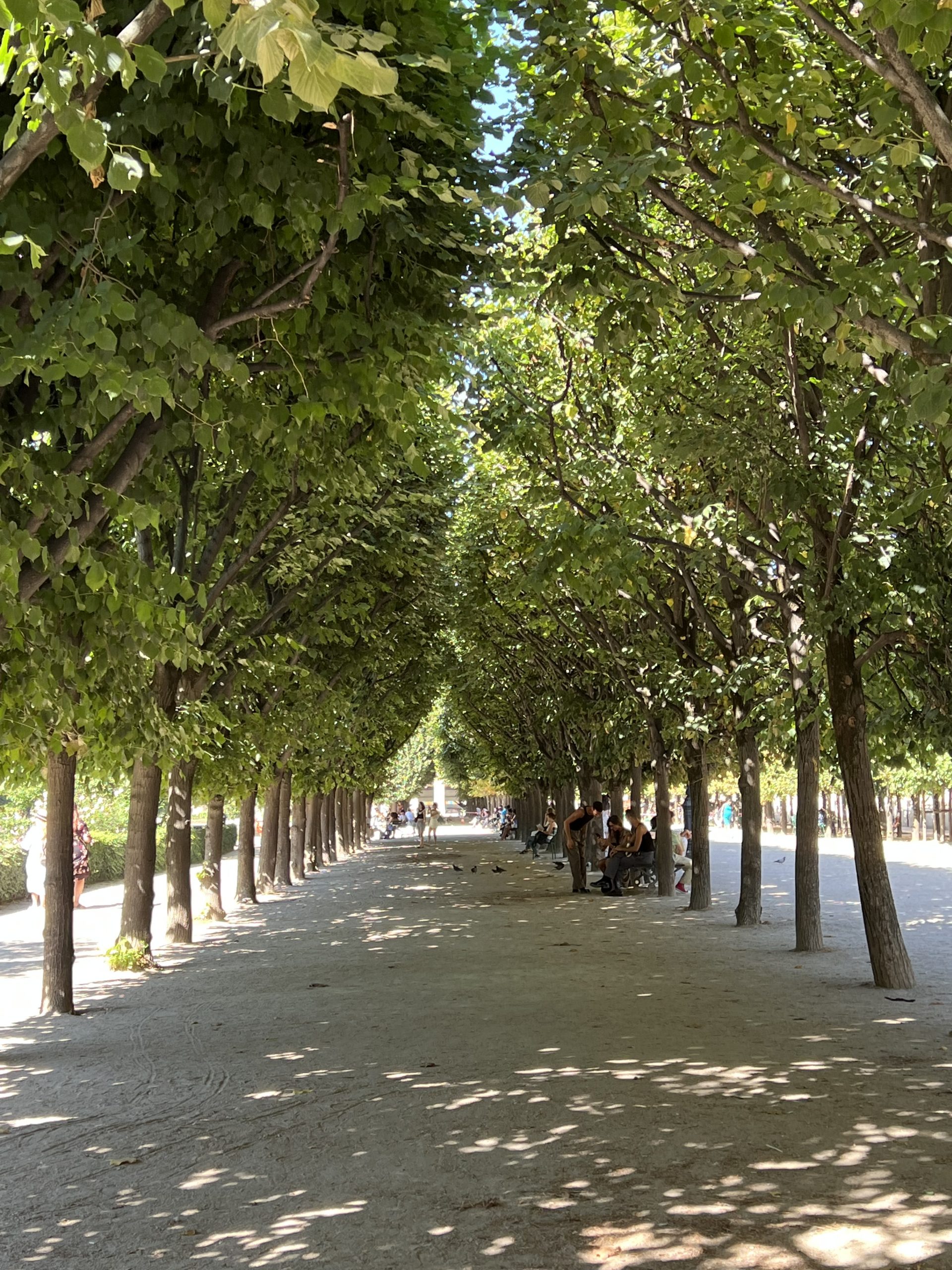 So many parks and green spaces! 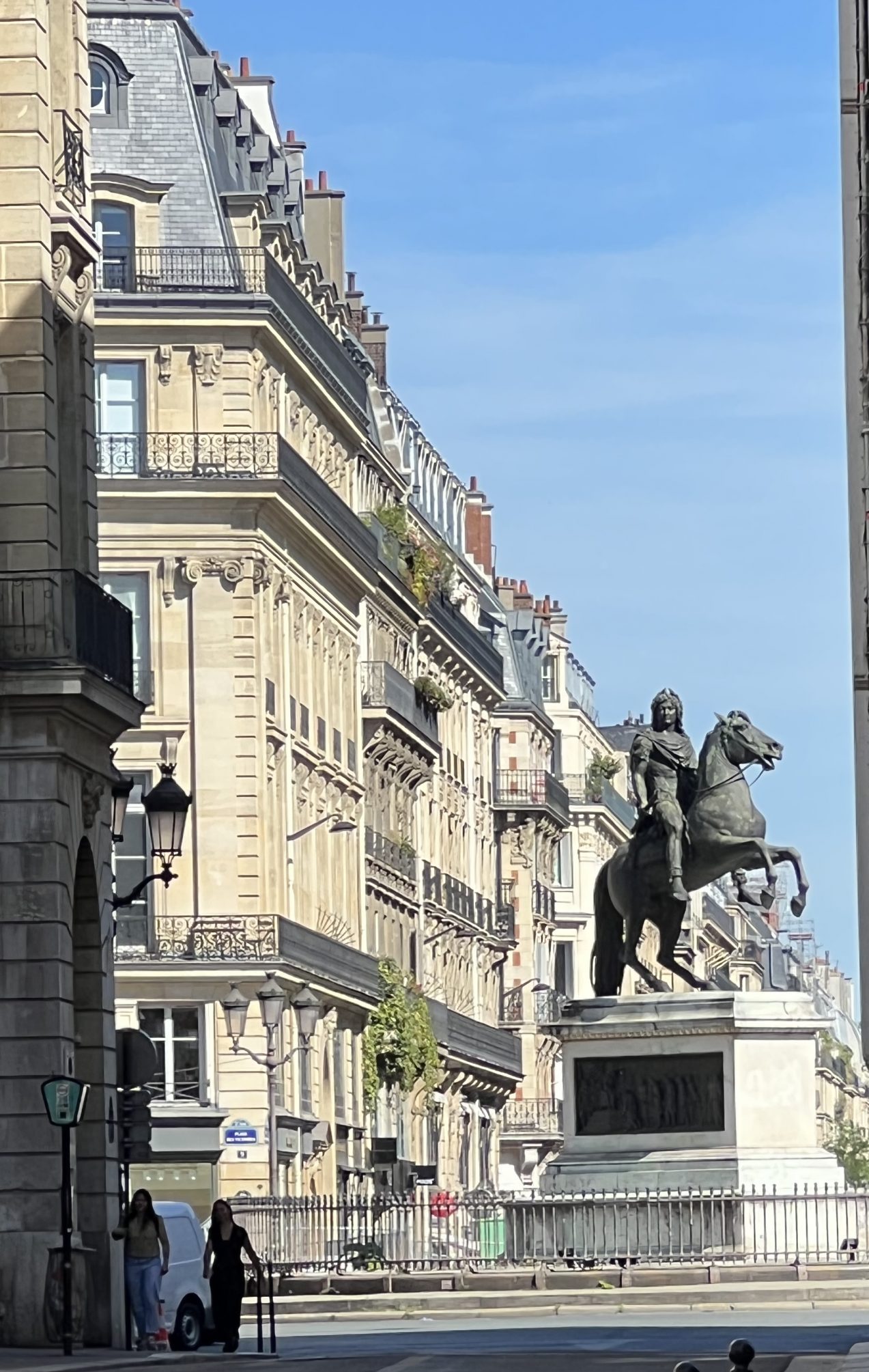