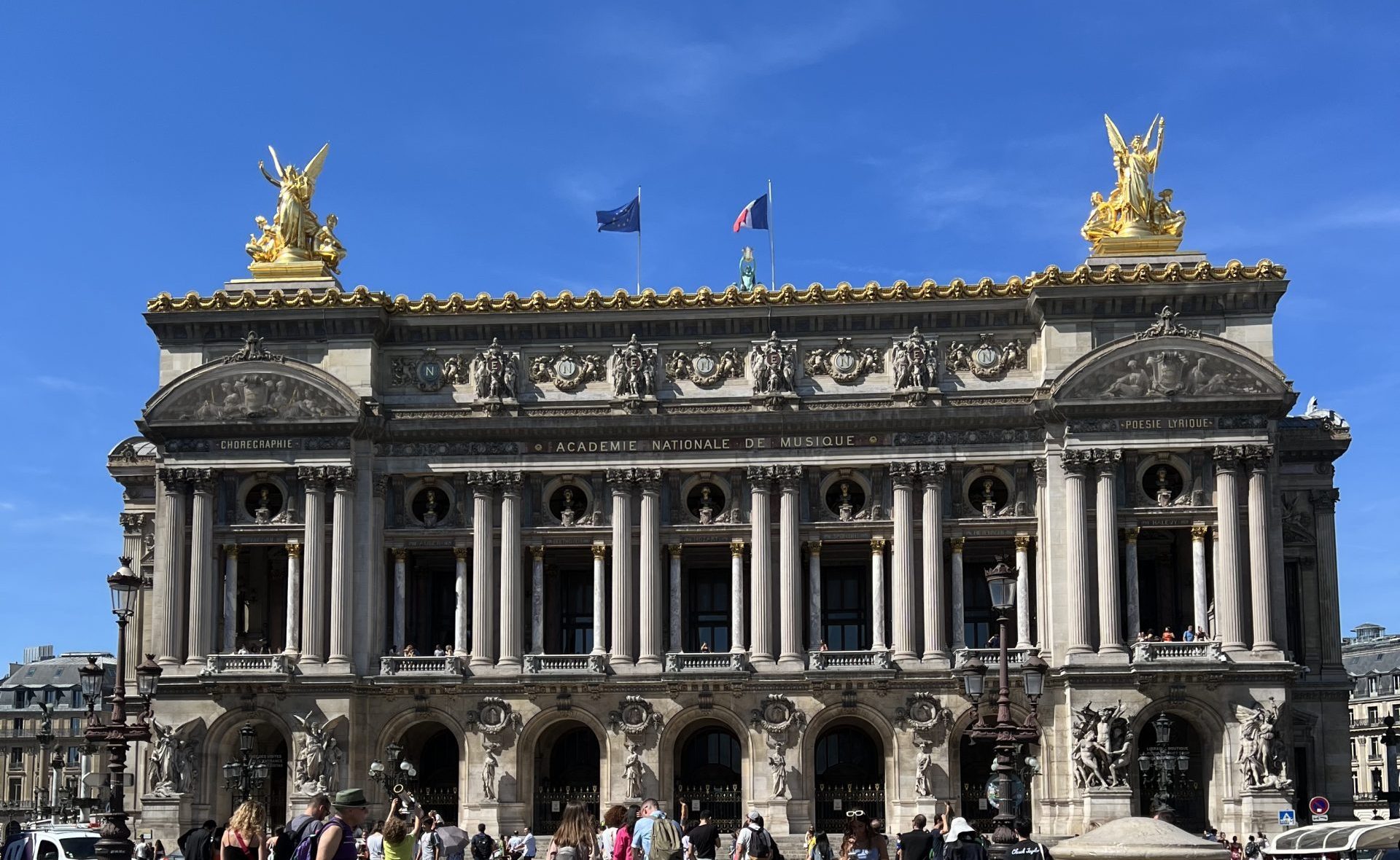 Pop quiz! Name a building anywhere in the world that is named after the architect. Can’t think of one, can you? Buildings are always named after their benefactor or location or purpose, right? Well, here’s the exception to the rule (as we know, every rule has an exception): The Palais Garnier in Paris. I was curious as to why this is the case, thinking it could only be due to one of two reasons: Was it because they needed to call it that to distinguish it from another opera house? OR Is it so spectacular that the architect deserved the high honor of having the building named after him? In reality, this was the thirteenth opera house; the previous twelve had burned. It was named Palais Garnier “in acknowledgement of its extraordinary opulence.” Not only did they name it after the architect, but they call it a palace! That’s some pretty heady praise for such a young architect. Garnier told everyone that it was designed in the “Napoleon III style.” (I’d call that sucking up to the Big Cheese; others may call it “brown nosing.”) Anyway, we had to go see it for ourselves. I’ll admit that we were a bit late getting there. I don’t know why we haven’t toured it on a previous visit to Paris, but we took a guided tour of the Palais Garnier this week. Better late than never, right?

It is worth noting that the Palais Garnier is arguably the most famous opera house in the world. Some say that it was made famous by the 1910 novel by Gaston Leroux entitled Phantom of the Opera. We watched the movie last week to refresh our memories. The plot did not rock my world, but we were in awe of Andrew Lloyd Webber’s genius once again as we listened to the incredible music. However, there were a couple of scenes and situations that had roots in the Paris opera house. For example, the scene where the chandelier crashed to the floor was inspired by actual events. In 1986, the chandelier really did fall to the floor and it killed a member of the staff. Also, there are lots of scenes where the characters are rowing a boat in the cellar of the opera house. Obviously, there isn’t a river down there, but when Garnier was building the opera house, he discovered that the groundwater was very high and he had to employ some interesting tactics to solve the problem. That’s why there were rumors of a subterranean lake and explains the underground river in the play and movie.

This is the box that the Phantom of the Opera occupied in the book.

Maybe we should back up and put on paper a few more historical notes before we get to the incredible photos. Here’s what happened. There was an attempt on the life of Napoleon III at the Salle Le Peletier, the opera house that was in existence in 1858. Napoleon III had his staff initiate a contest for a new design that would be larger and safer, but contestants were only given a month to come up with plans. About one hundred seventy applicants turned in plans and each applicant had to give a motto summing up their design. I think it’s pretty funny that Charles Garnier submitted this quote: “Hope for much, expect little.”  I can’t imagine how in the world he thought that quote would inspire confidence that his design would be the best, but somehow he won the contest. 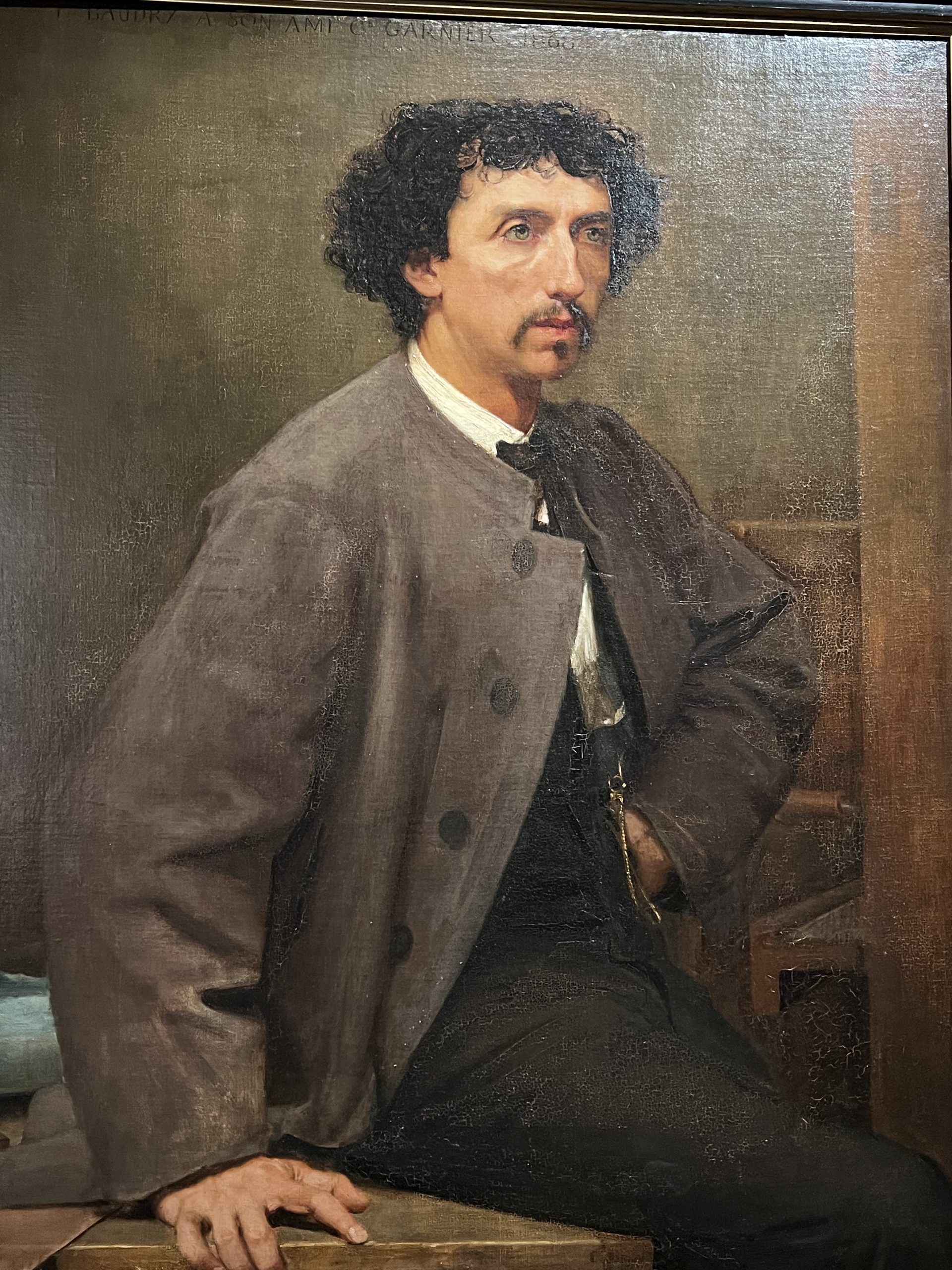 The line outside the Palais Garnier was insane Wednesday morning. Take it from us: don’t visit Paris in August. If you must, don’t try to do anything without tickets purchased well in advance. We had arranged a guided tour, so we only had to wait about twenty minutes to get inside the building. The tour was fascinating. We truly cannot ever remember seeing such an opulent building and I have not forgotten Versailles. I will add some pictures and try to do the place justice and tell some interesting antidotes with the photos. (Don’t forget to switch to the website if you want to read the captions. Don’t know why they won’t show up in the email version, but Word Press works in mysterious ways.) 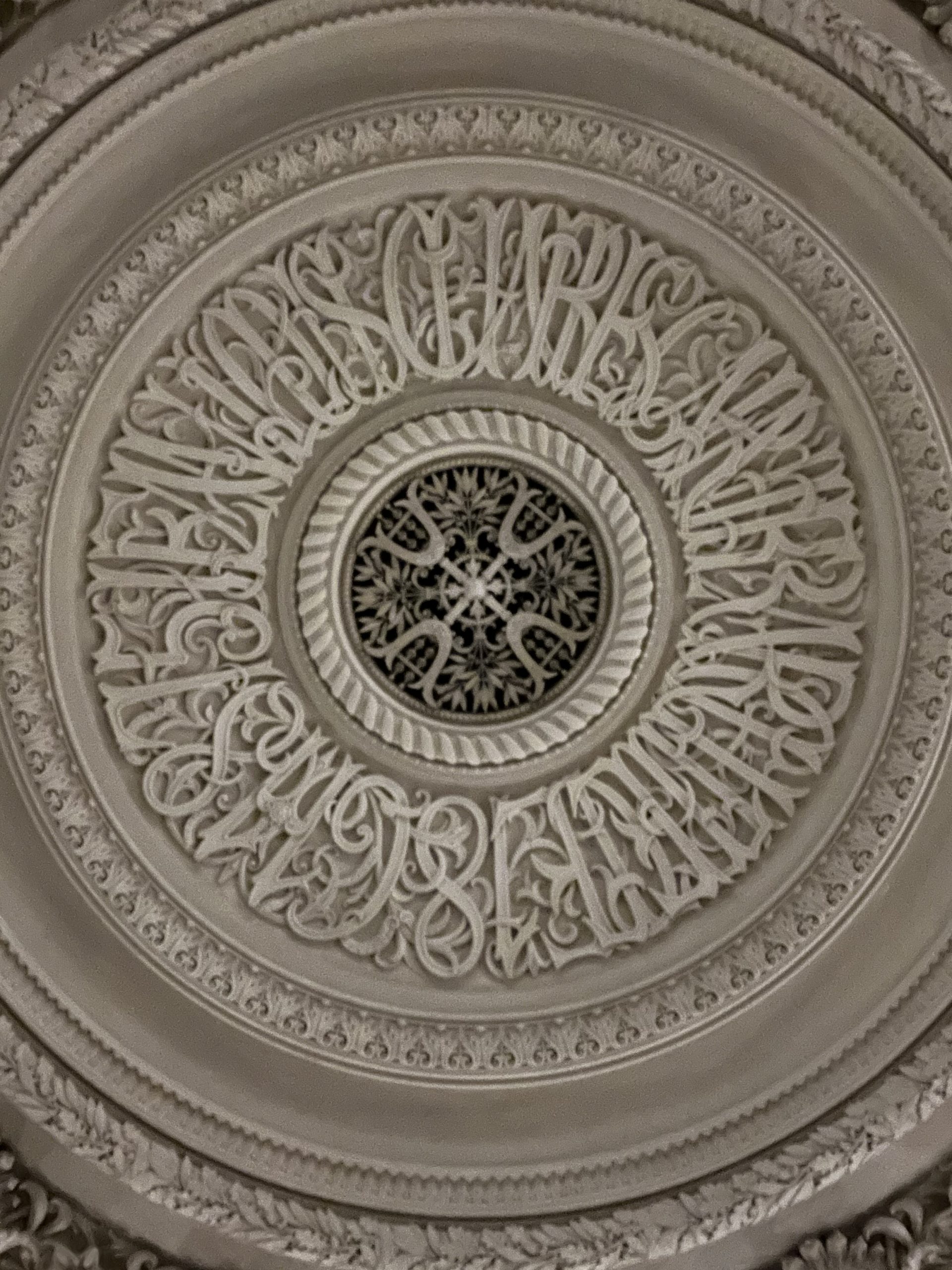 Charles Garnier was forbidden to sign his name in any way inside the opera house. He carefully hid his entire name in the design on the ceiling of one of the lobbies. 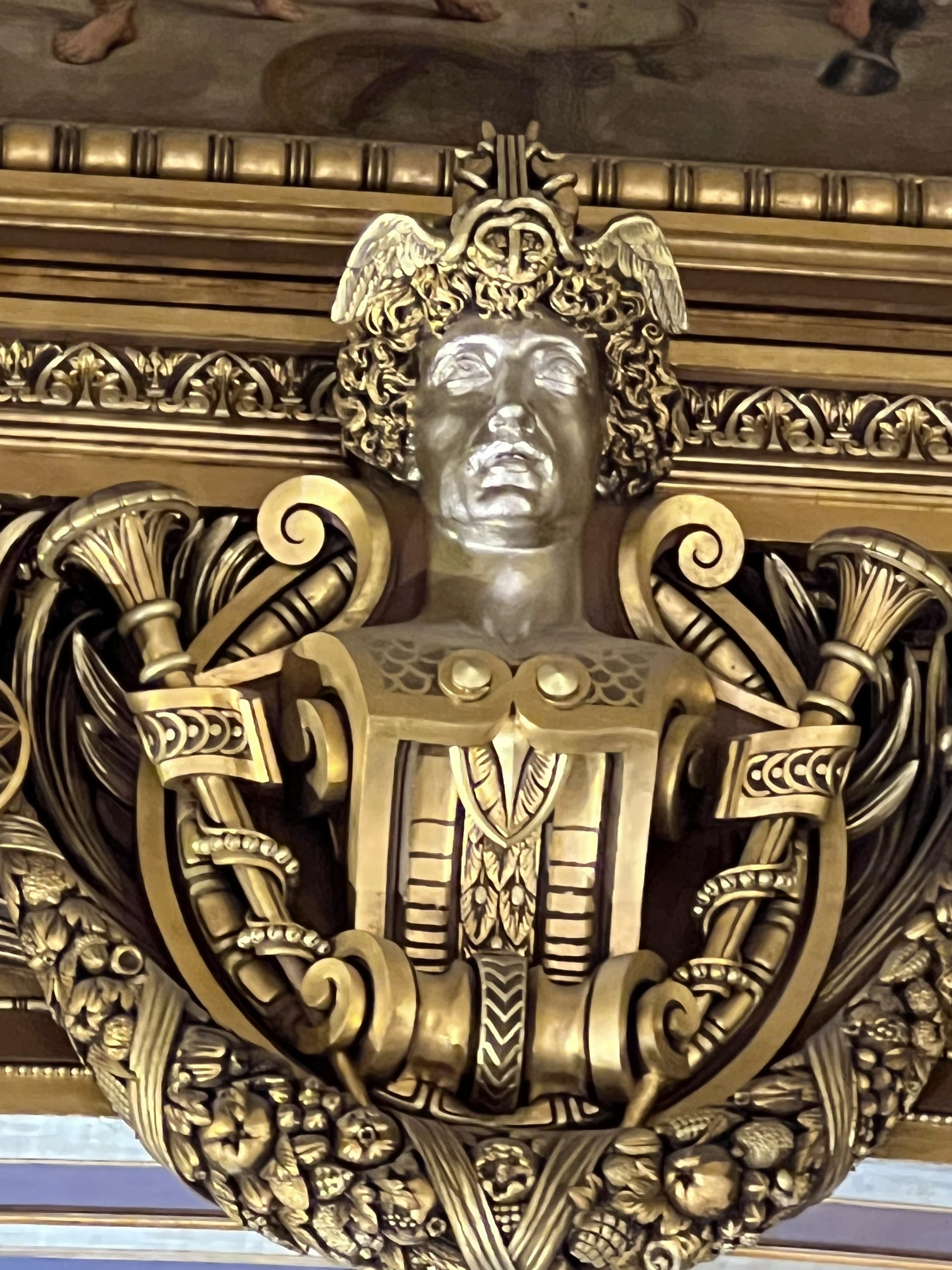 Garnier had his friend use his likeness above one of the doors and that of his wife over another. Note the curly hair and the mustache above. 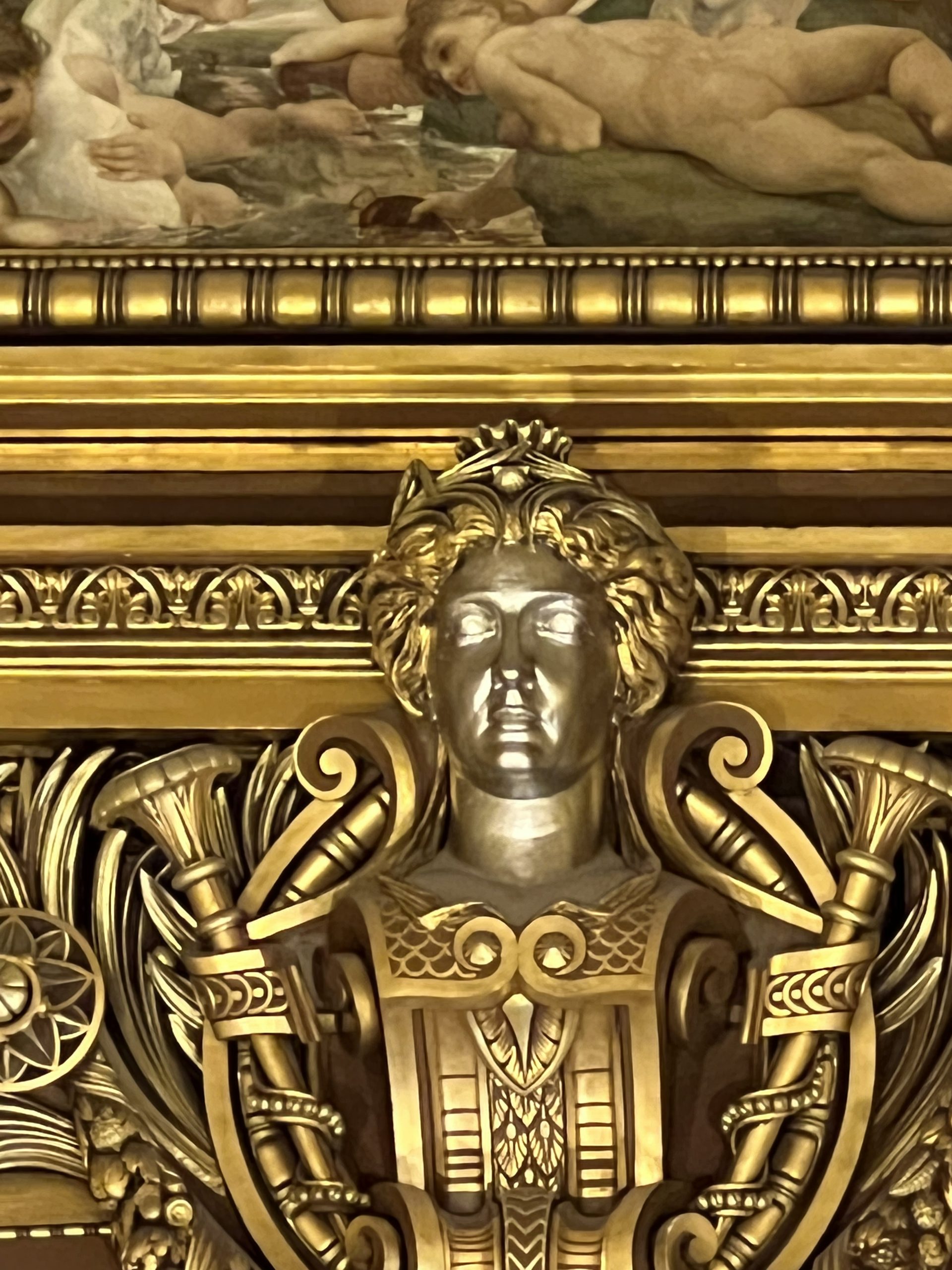 Garnier had his artist friend paint himself, Garnier, and another artisan in the corner of this huge mural. 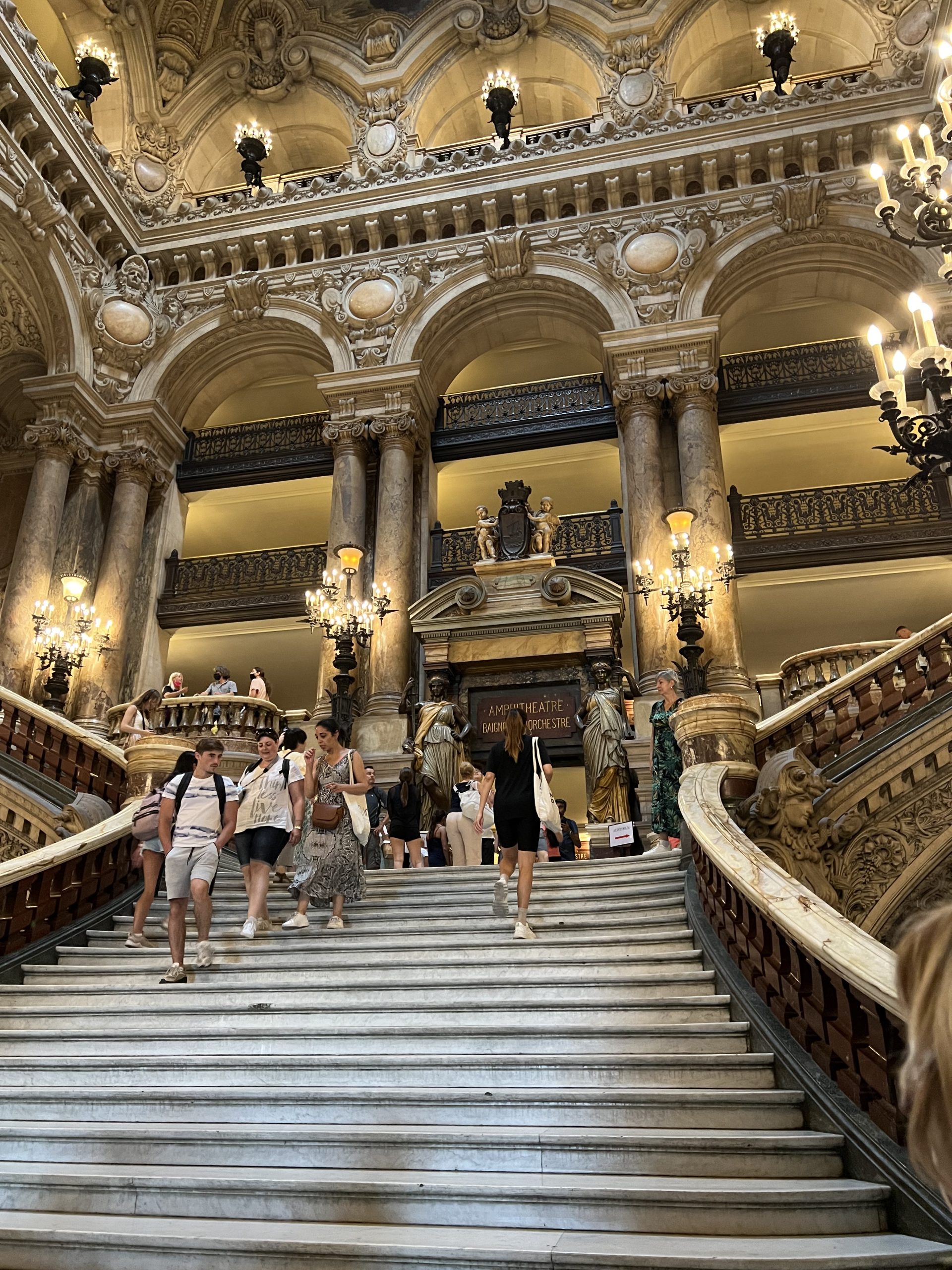 The “nobodies” had to arrive three hours befor the start of the performance and were not allowed inside the auditorium. They had to stand around behind the iron railings. The auditorium was reserved for the upper class folks. 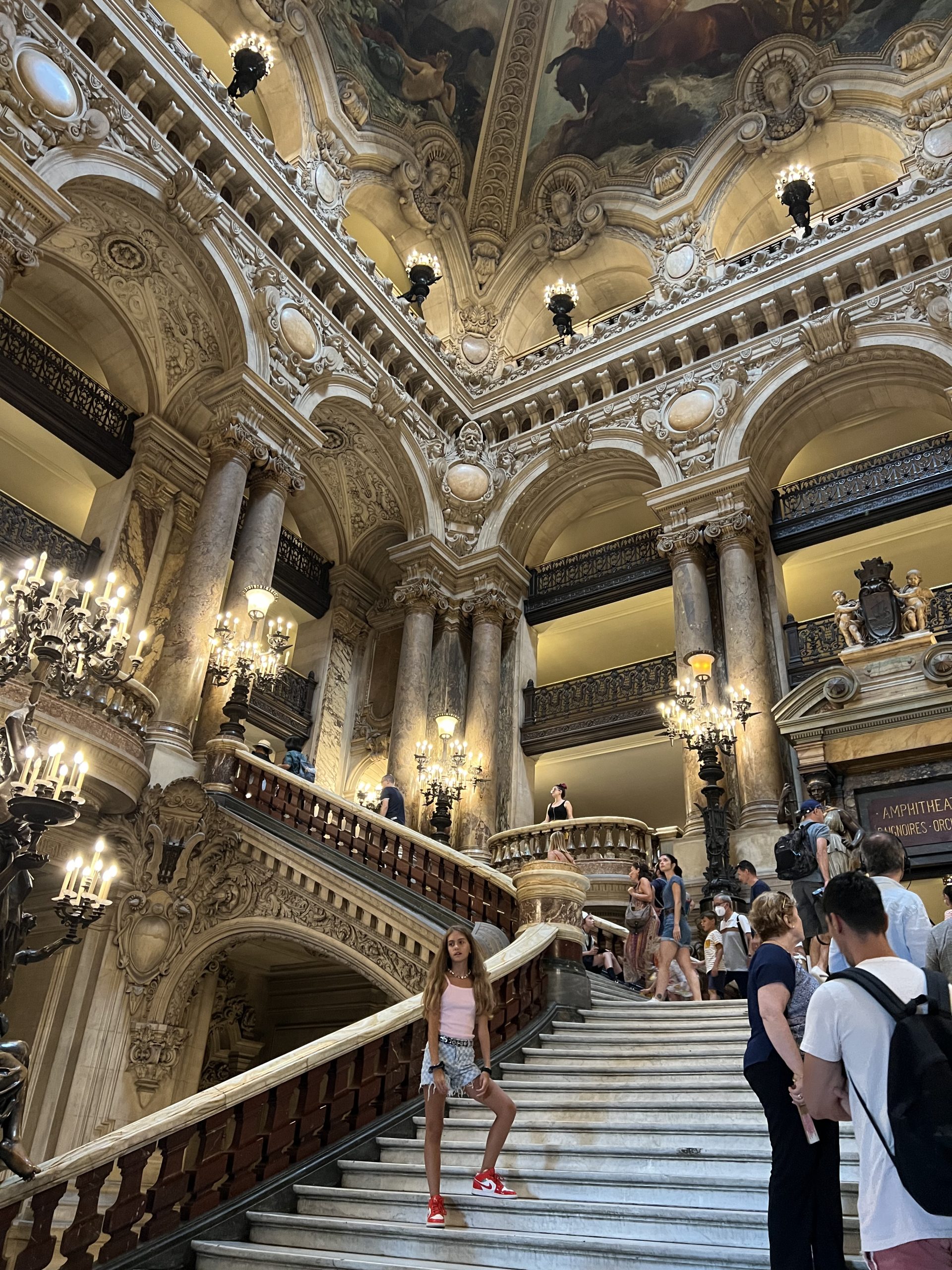 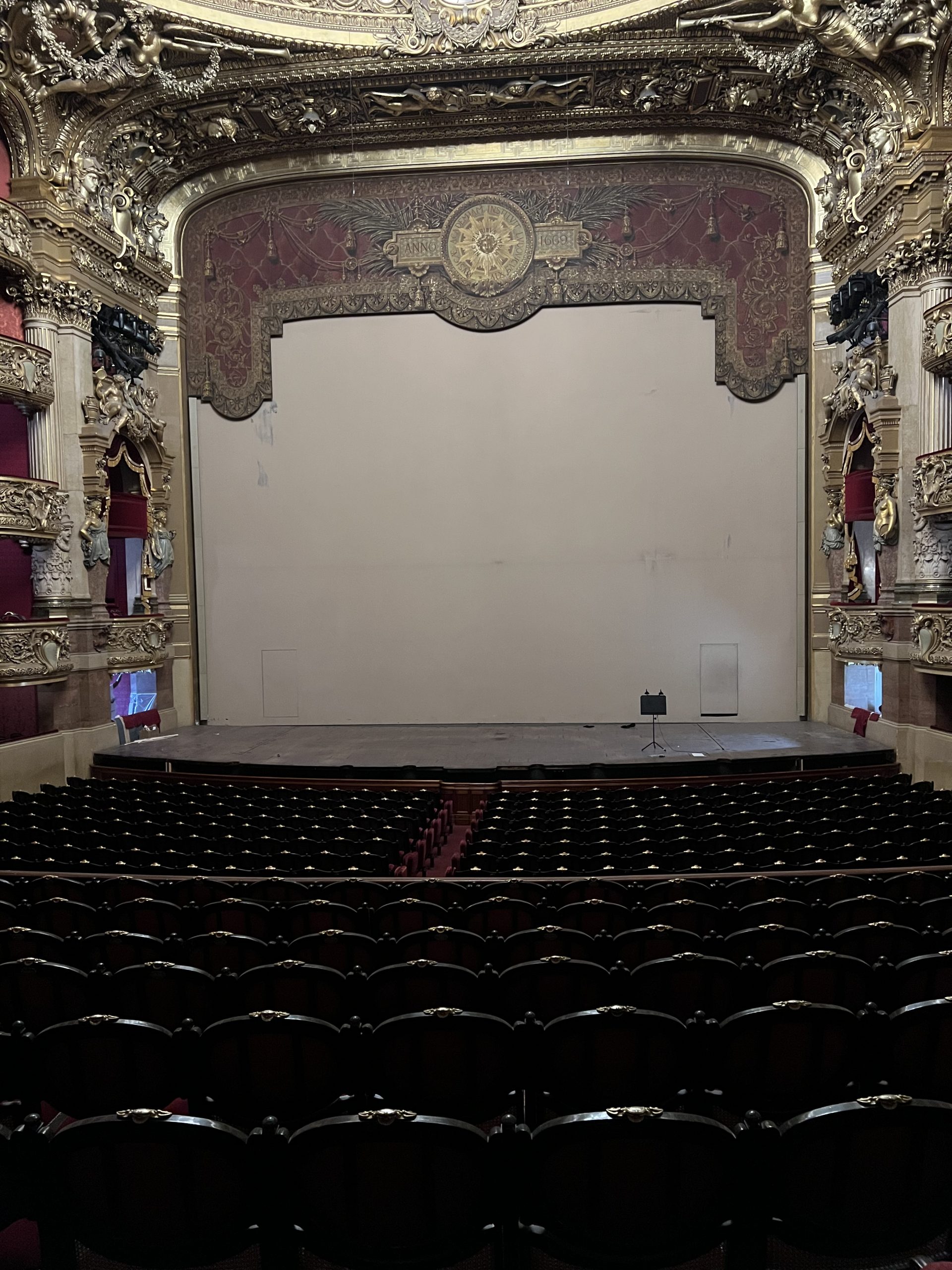 The entire Arc de Triomphe can fit on the stage; it’s that big! four hundred fifty dancers can be accommodated on the stage at one time. 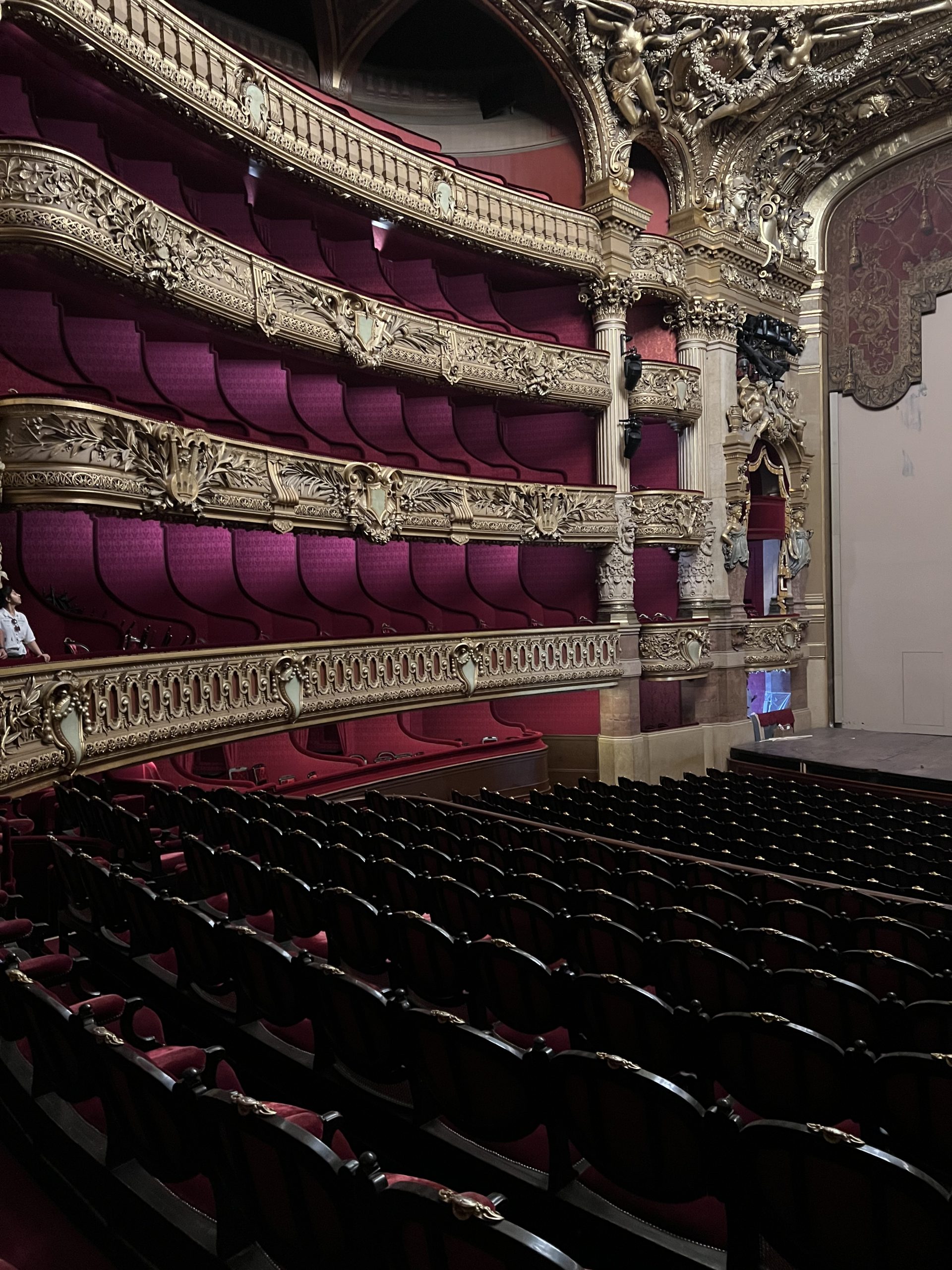 The boxes are positioned so that the patrons can “see and be seen,” since that was the main reason for coming to the opera.