Friday morning, our last full day in Paris, we took a walk through the Paris beloved by the wandering soul that was Ernest Hemingway. I will admit that I don’t love his writing, but I do find his life compelling. I remember reading The Old Man and the Sea prior to our first trip to Key West. I finished it and thought, “Really? This is the great Ernest Hemingway? What am I missing? I’m supposed to love this!” I tried to read at least one more of his novels, but they just didn’t cut it for me. I do, however, love any story or movie about his life. I loved the portrayal of him in Midnight in Paris. I think we’ve watched that movie three times and we NEVER watch a movie more than once. OK, that’s a lie. We’ve watched Gone with the Wind more than once and I think we’ve watched Once Upon a Time in Hollywood at least twice. But that’s it! It’s stupid to watch something you’ve already seen. Yeah, that’s stupid and so is watching a football game when you already know the final score. But, then again, we’ve all watched World War II movies and we know who won that. Never mind. Forget all that. Now that I’ve probably insulted everyone, let’s continue with Hemingway.

An American by birth, Hemingway had a lust for seeing the globe. His stint as a foreign correspondent for the Toronto Star was the impetus that brought him to Paris as a young man. He arrived in 1921 with wife #1, Hadley. They left for brief time when she was pregnant and she gave birth to their son, Jack (aka Bumby), in Toronto. They returned to Paris and Ernest began to concentrate on his writing and turned in some of his best fiction during those years. He met up with a group of expats calling themselves the “Lost Generation.” This freewheeling group of friends spent long hours laughing, smoking, drinking champagne, and debating a range of esoteric and philosophical ideas in the cafes and bars of Paris. The Lost Generation included the likes of Gertrude Stein, James Joyce, and Pablo Picasso, as well as F. Scott and Zelda Fitzgerald. When Hemingway left Paris again, he took with him wife #2, Pauline. They left Paris for the USA in 1928. He lived many other places in the world with a couple more wives, but he never again lived in Paris. His memoir of his time in Paris, A Moveable Feast, was published posthumously by his fourth wife, Mary. It continues to sell like crazy in France, especially in Paris.

But Paris left an indelible mark on Ernest and he, likewise on that great city. To me, that’s saying alot. Paris is a city in a league of it’s own, so if someone lingers in its collective memory, it’s like an unforgettable kiss. Like that first kiss when you are a teenager. You just never forget it, even though you can hardly picture the person who kissed you. Ernest lived in the Quartier Latin in several different apartments, sometimes without bathrooms. He had favorite bars all over Paris and was known to blow lots of money drinking and gambling on the horse races. There are plaques at the former Hemingway residences to this day. Also, a couple of bars and cafes such as Les Deux Magots and Café de Flore advertise themselves as old Hemingway haunts. Hemingway liked to portray himself as a common man when, in fact, he was far from it. Both of his first two wives had plenty of money, but he preferred to give the impression that he was a struggling expat and writer. He was a bit of a jerk and made caustic remarks about absolutely every one of his friends except Sylvia Beach, the woman who founded Shakespeare and Company Bookstore. I can only assume that he needed her and did not want to anger her.

Along our walk, Brad pointed out spots used in filming Midnight in Paris. If you haven’t seen that movie, you might want to look for it. I will show some pictures of those spots from the movie as well as photos of his early apartments. Even though I swore off Hemingway after my last attempt to read one of his books, I have decided to give Hem another try and have already downloaded A Moveable Feast. After all, it’s about Paris in the “Roaring Twenties,” or as the French call it, the “années folles” (the crazy years). 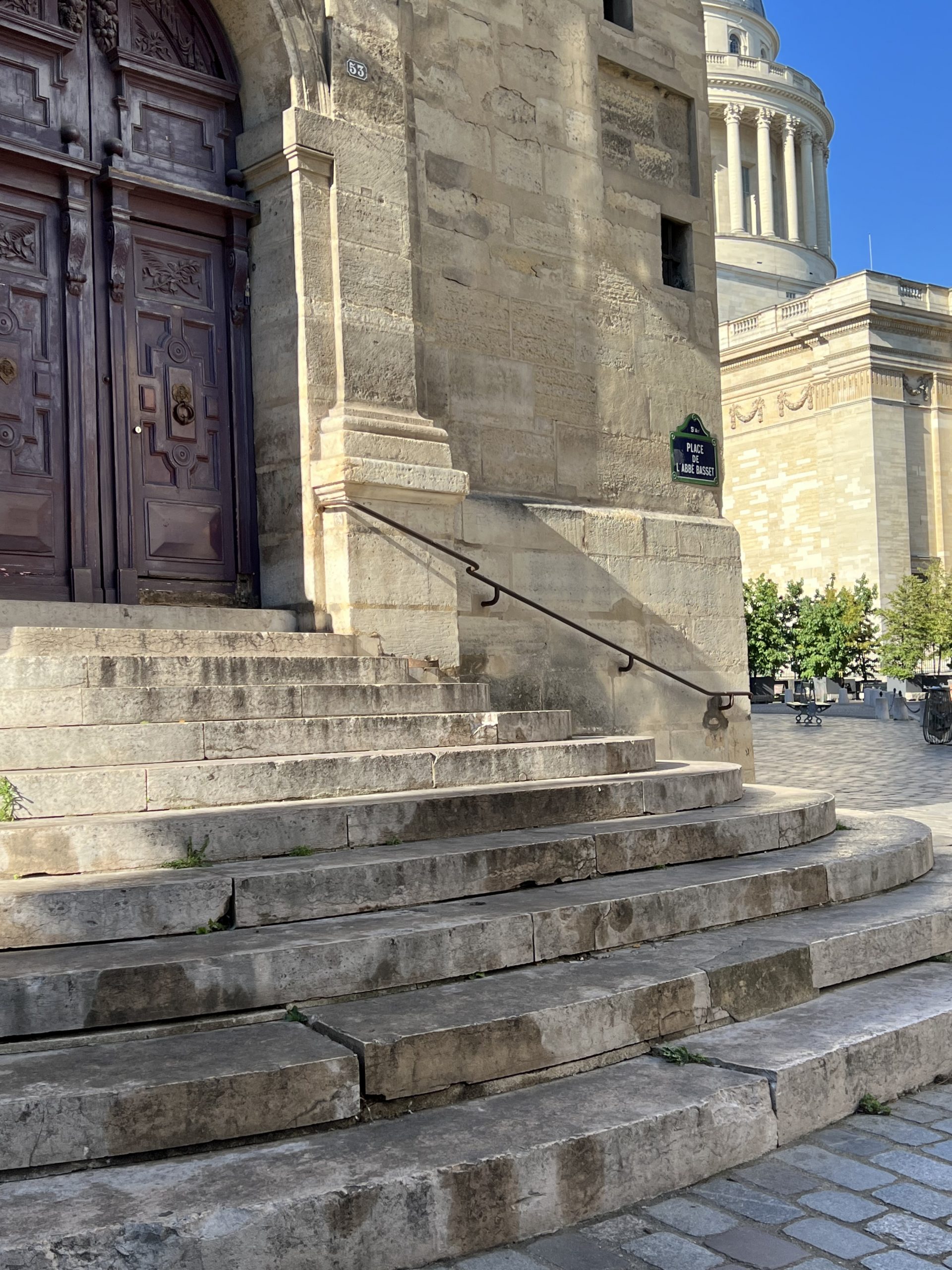 Church steps where Gil Pender (Owen Wilson) sat and was picked up to be transported back in time in the movie Midnight in Paris. 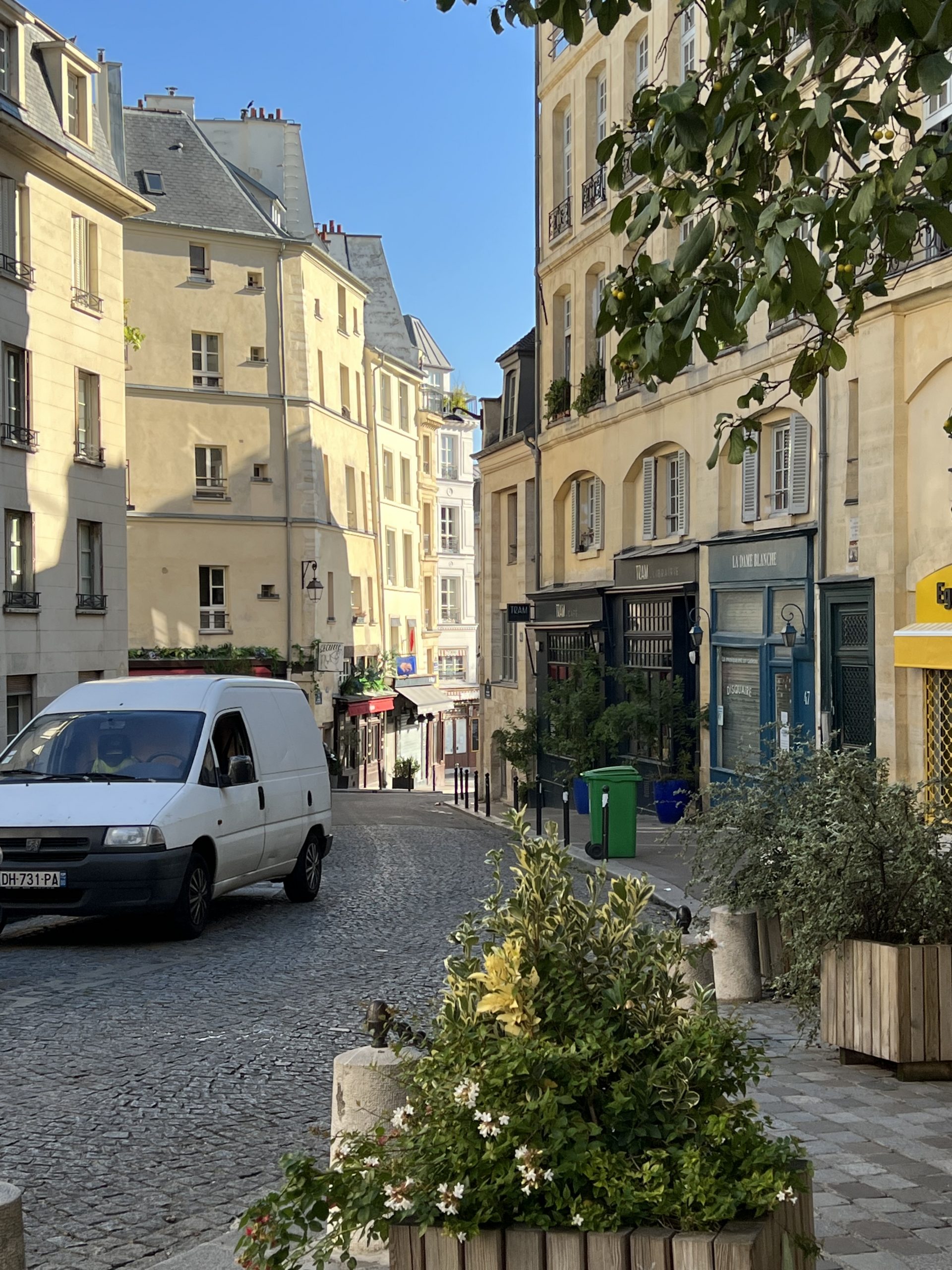 The street in front of the church where the old car came along in the movie. 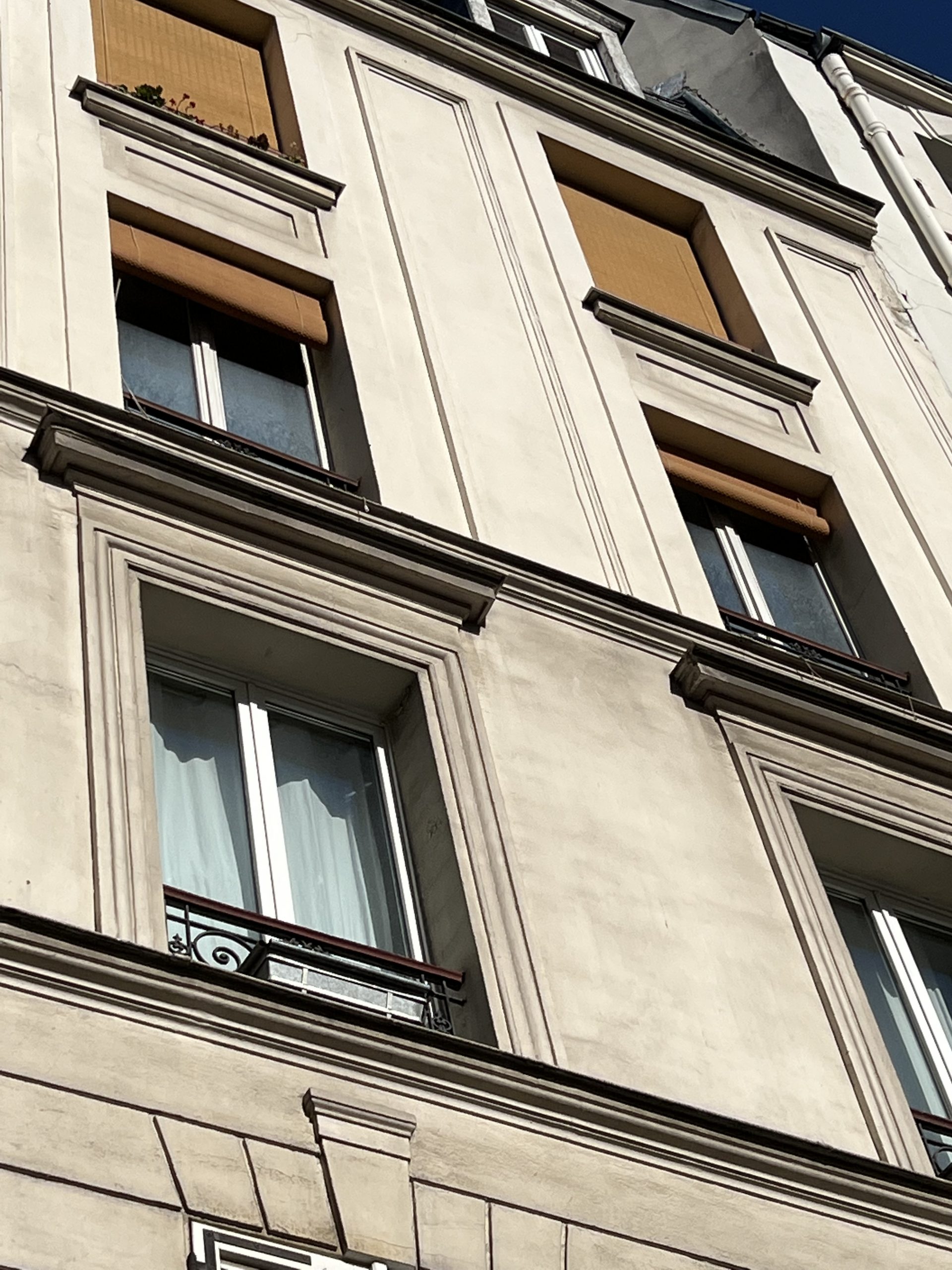 The second home that the Hemingways lived in was the apartment with the two rolled up shades. 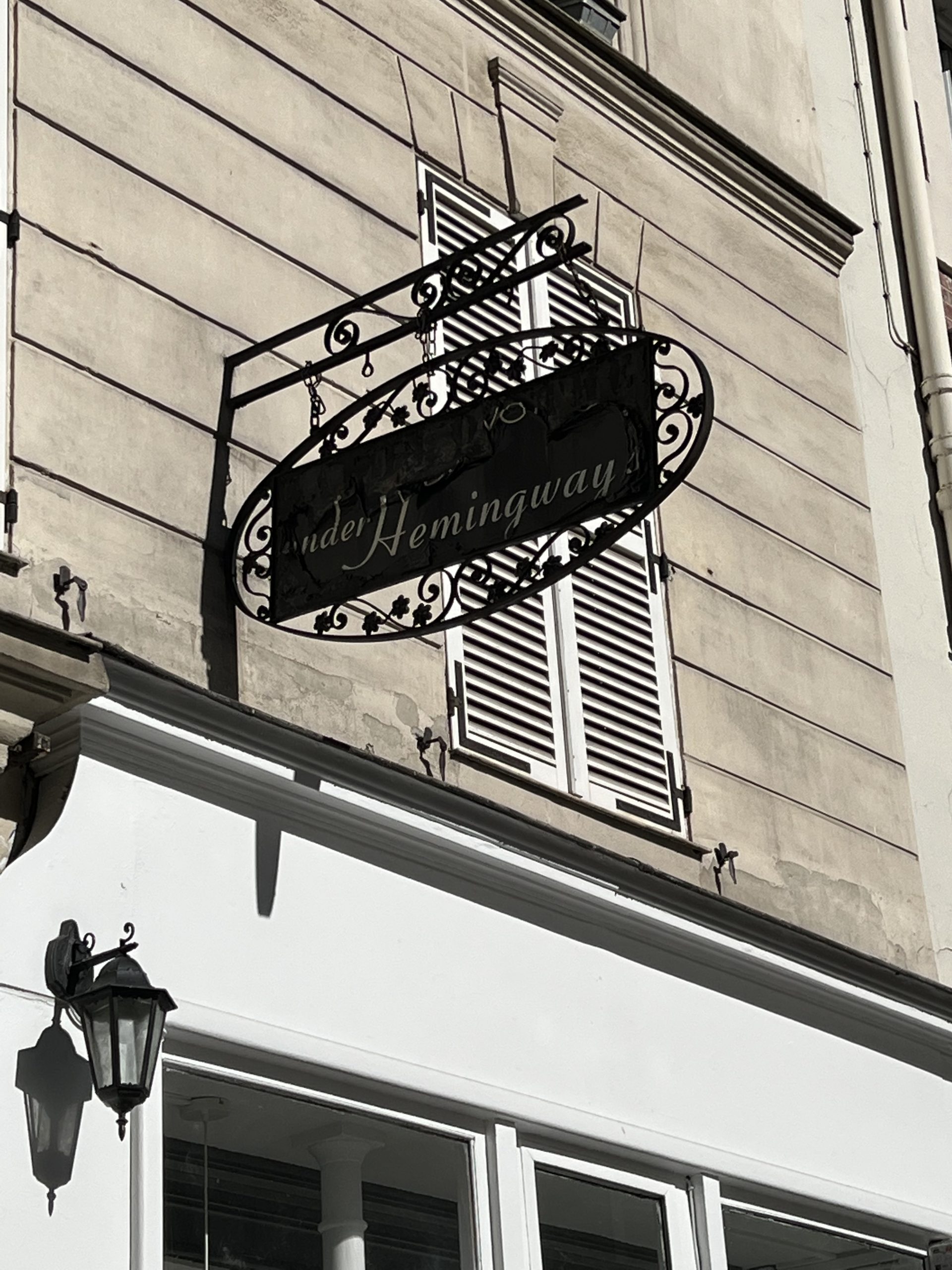 The business underneath trying to make a few bucks off the Hemingway name. 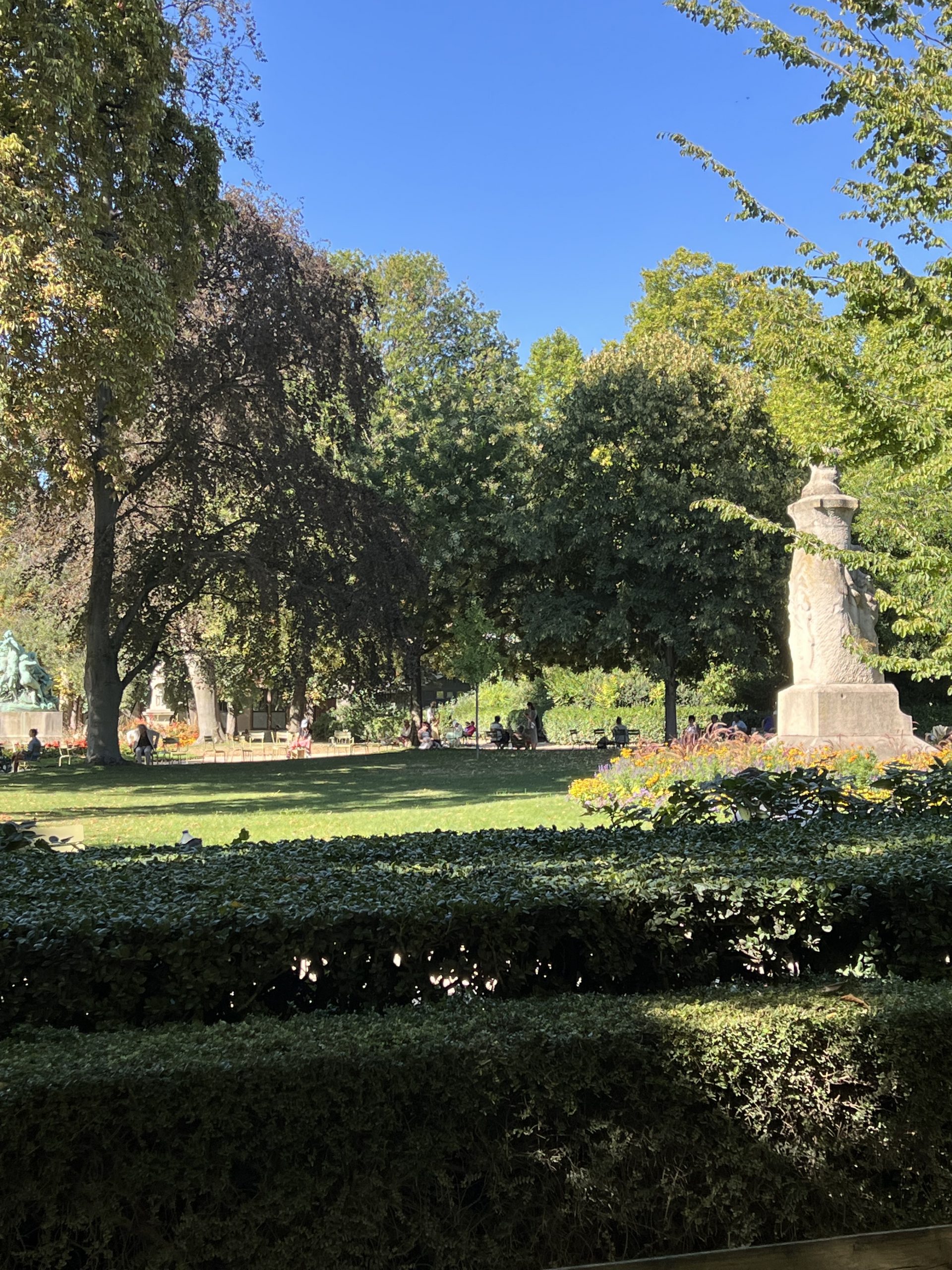 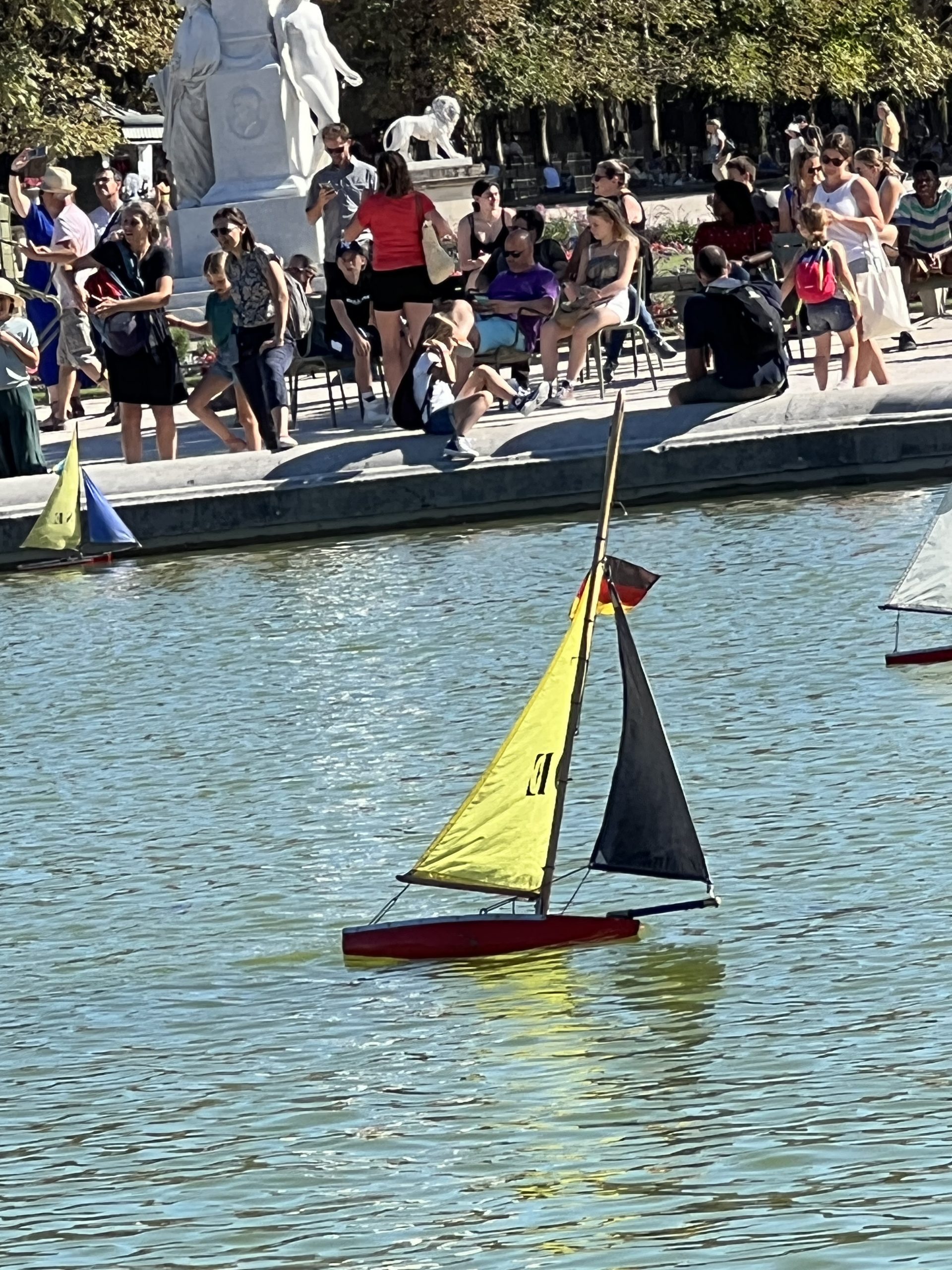