The Athens of the South 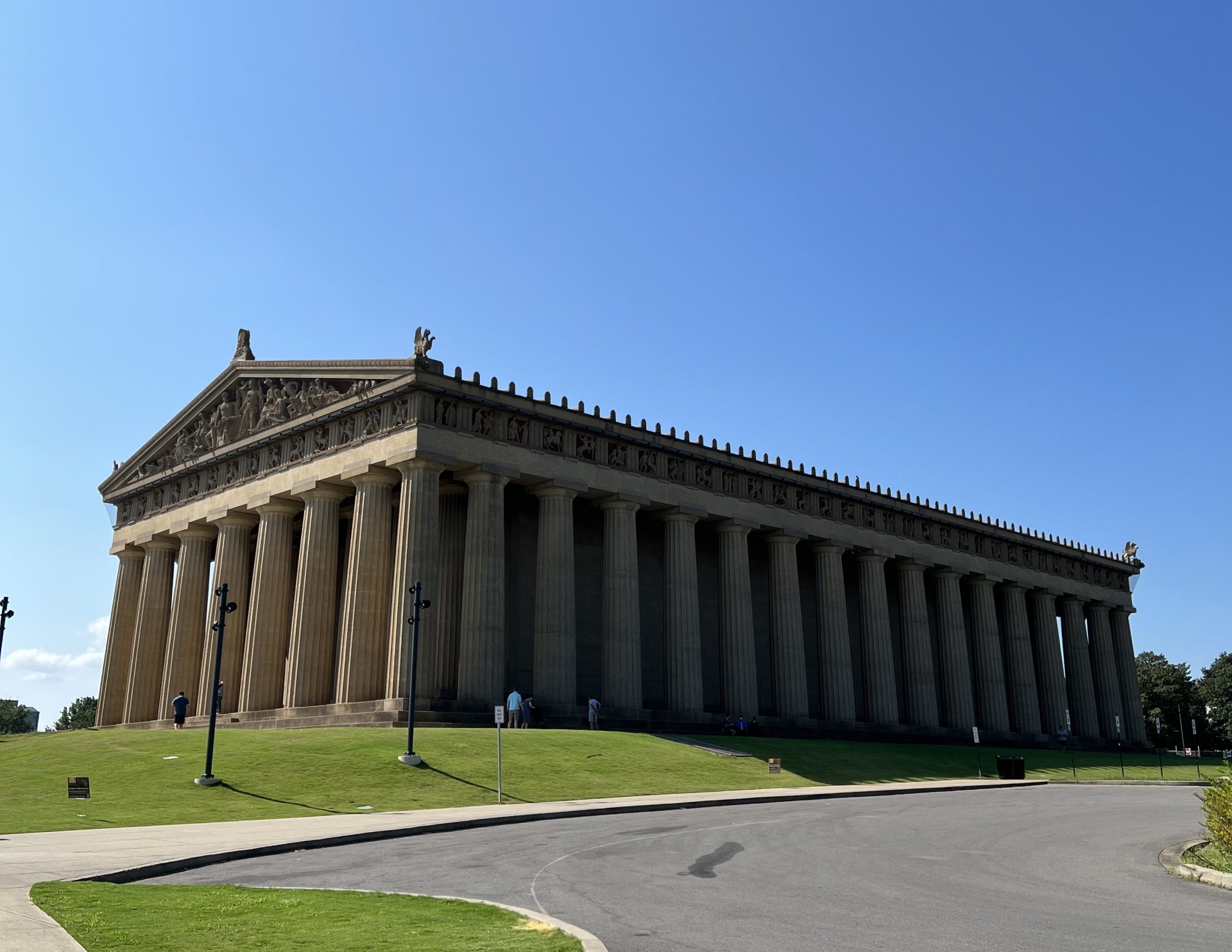 Let’s play Jeopardy. I am the guest host; you are the contestants. You must answer my statement with a question. Here goes: I say, “The Athens of the South.” You stare at me thinking, “Wut?” Then, before you know it, time’s up and the buzzer sounds and I give you the answer: “What is Nashville?”

Let’s be honest: you would have never guessed Nashville no matter how much time was on the clock. Far be from me to besmirch Music City (or Nashvegas, as it is called by some), but, well . . . Ok, I may have stifled a chuckle when I first heard this because Nashville conjures images of the honky-tonks on Broadway such as Kid Rock’s Big Ass Honky Tonk & Rock ‘N’ Roll Steakhouse on Broadway, just to mention one such establishment. Athens, Greece, for some reason, isn’t the first place to come to mind as a sort of sister city. However, there are several good reasons why Nashville was given this nickname back in the nineteenth century.

Long before country music took root in the city, Nashville was a genteel and refined Southern city. It took pride in being the first city in the South to establish a public education system. Also, by the mid-1800s, several prestigious institutes of higher learning had been established there, so like Athens, it was thought of as a center of learning. Even back then, the city had several theaters and many elegant accommodations, and all of this contributed to create a rich cultural scene. Plus, the beautiful new capitol building was built atop a hill right downtown around 1859. Without a doubt, Nashville was a Southern cultural mecca.

In the late 1800s, Tennessee was throwing a big centennial party as was customary way back then, and the city decided to “put on the dog” with a Greek village. And I don’t mean a fraternity and sorority enclave the likes of which you will find on many modern university campuses such as my alma mater. Somebody decided to play off the “Athens of the South” moniker and the idea took hold. They built the Parthenon as the centerpiece, but as was the case with those types of expositions back then, the structures were constructed as temporary. The Tennessee Centennial Exposition closed at the end of October 1897. In 1898, most of the buildings were torn down or moved to another location, but by then, the fine folks of Nashville had taken a shine to the Parthenon and decided that it should remain the focal point of Centennial Park. Time and weather took its toll on the shoddily constructed building and it got to the point where the city had to decide whether to tear it down or do whatever was necessary to make it a permanent part of the landscape of Nashville. 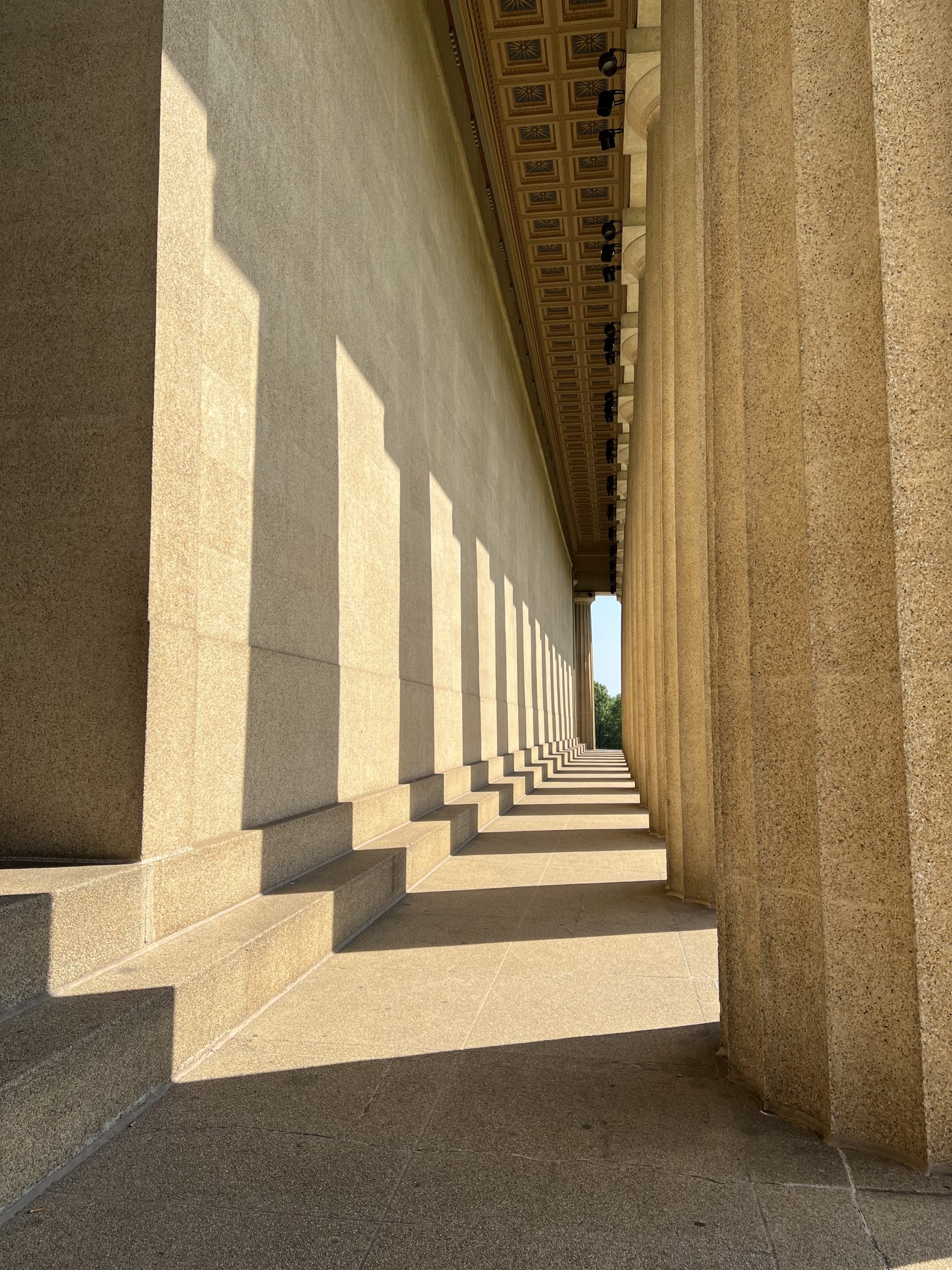 If you like to mess around with your camera photographing shapes and shadows, the Parthenon is your kind of structure.

Around 1920, the city decided to rebuild the Parthenon and it embarked on a decades-long reconstruction project. The effort was thwarted when a tornado ripped off the new roof and additionally, it was also hindered by cash flow problems over the years. The Parthenon itself was reopened in 1931, but it took a long time to accrue enough money to recreate and install Athena, the forty two foot statue that is the Parthenon’s pièce de résistance. She was actually completed in 1990, but she was completely white. It took nineteen guilders and painters three months to get Athena painted and gilded, but she was finally unveiled in 2022 in all her gilded glory. She is covered in eight pounds of super thin sheets of gold. We watched these sheets being made long ago in Italy or Thailand and, believe me, if you have ever seen these tiny sheets of gold, this number of eight pounds surely knocks your socks off. 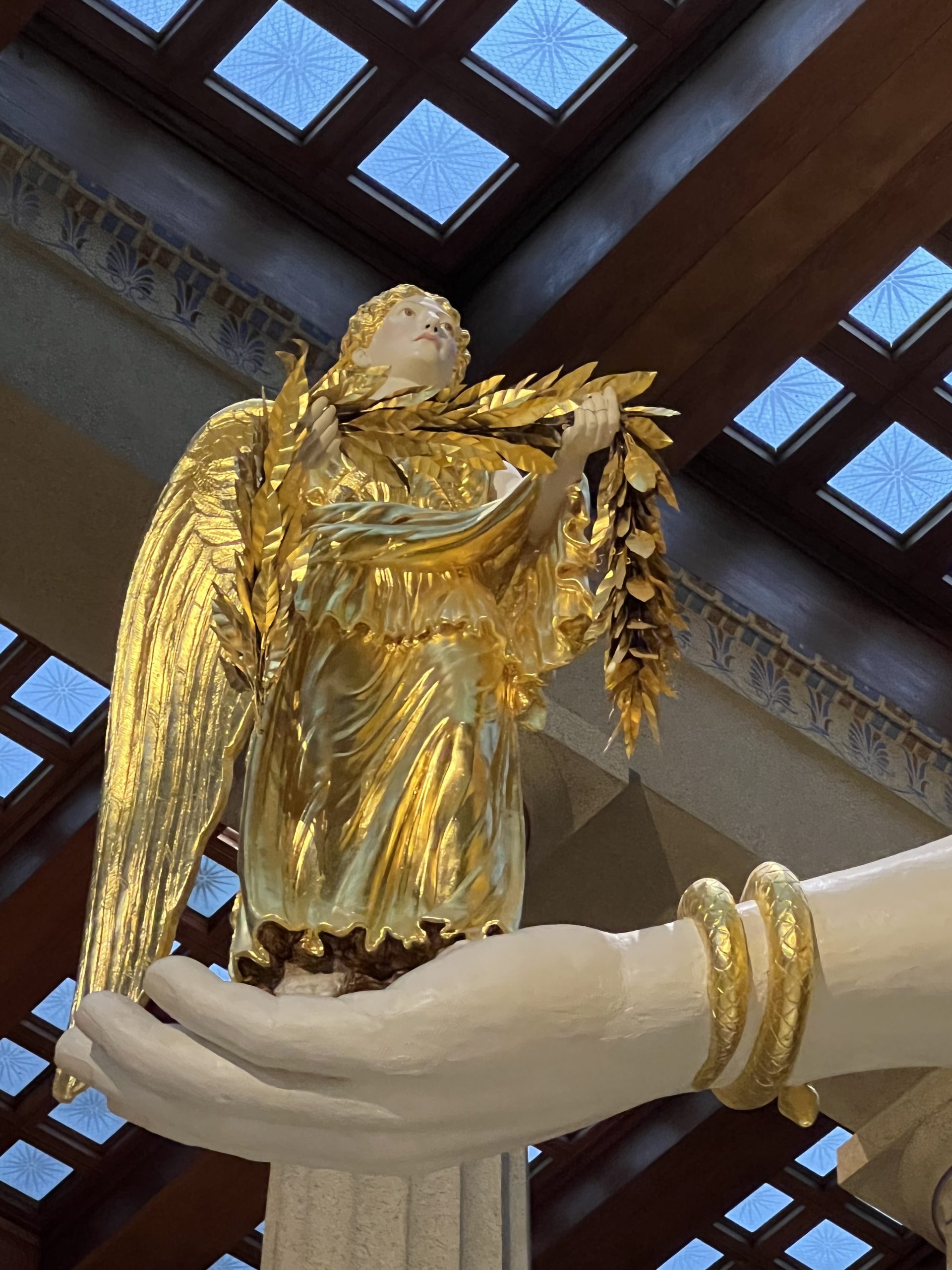 Nike, the personification of victory, is over six feet tall! 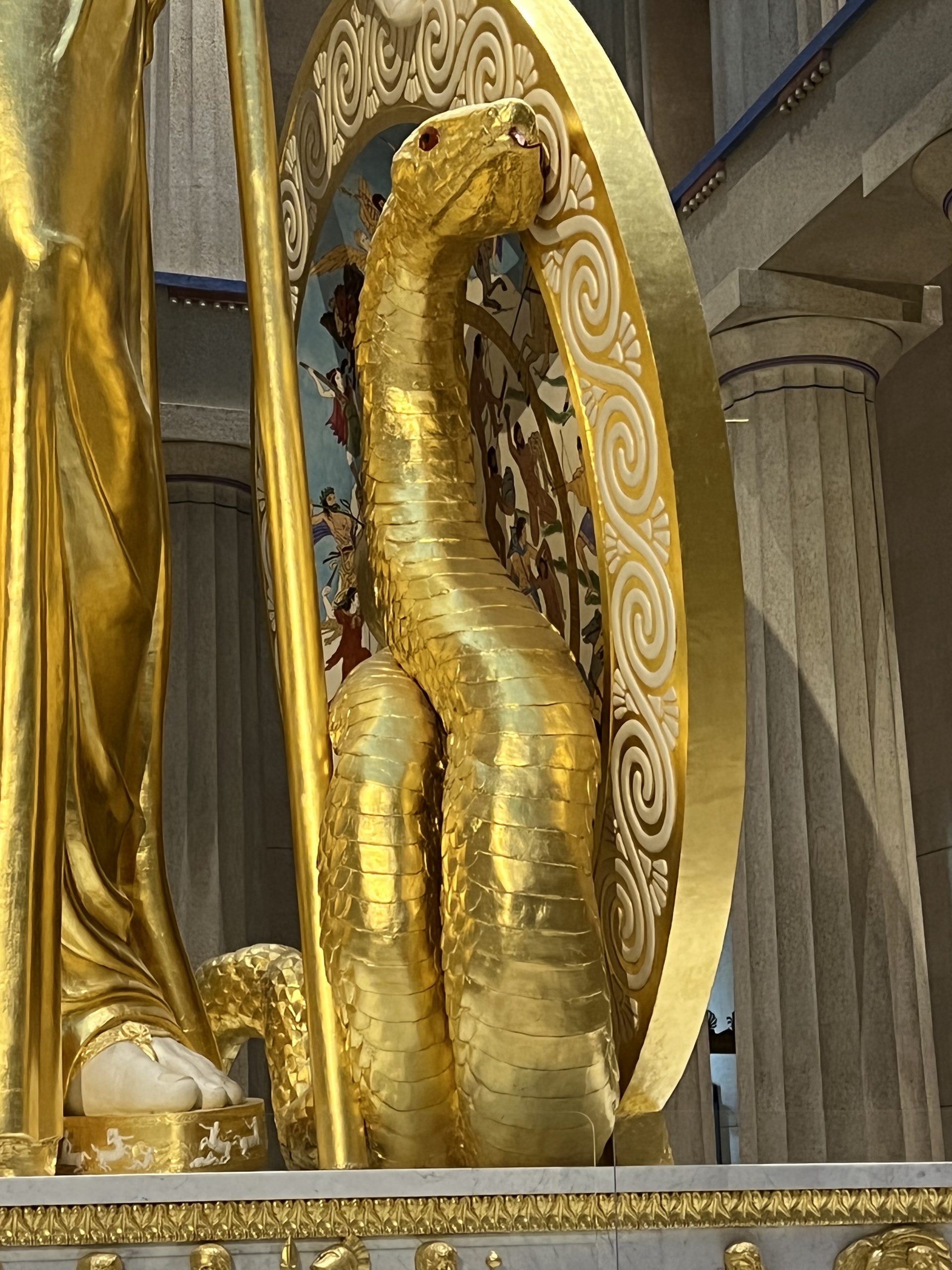 This serpent is huge. How I hate serpents, even gold ones. OK, this one isn’t so bad. 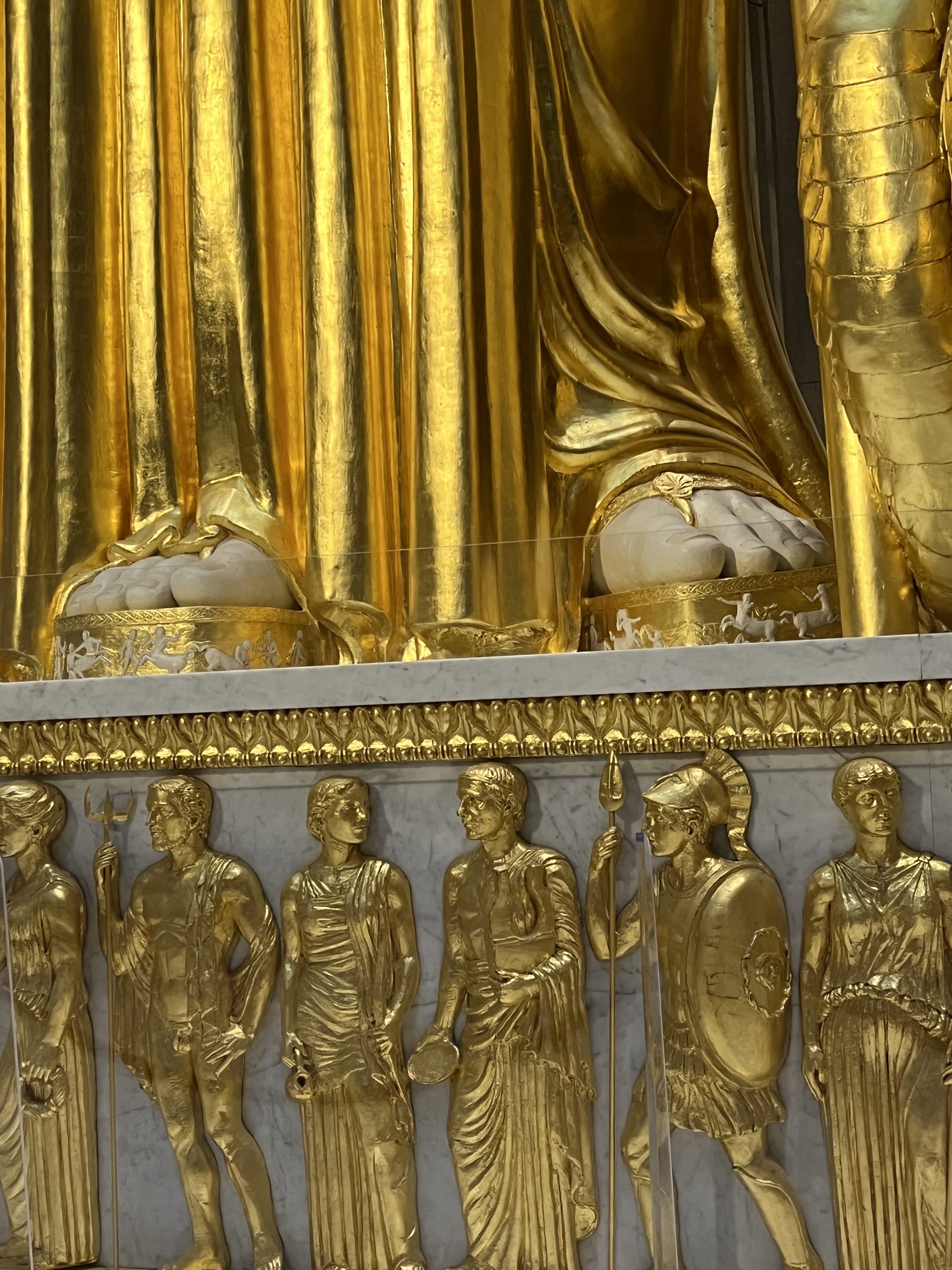 Ladies, check out Athena’s sandals. We NEED these sandals, right??

To this day, the Parthenon in Nashville is the only exact replica of Greece’s Parthenon in the world. It is Nashville’s cultural “ground zero” and the park is the city’s meeting place. That is where Nashville residents go to unwind and hang out. I had a conversation with a nice young doorman who told me that he and his buddies go there every Monday evening to play extreme frisbee. Centennial Park and the Parthenon are where Nashville residents flock to attend concerts, take an art class and see traveling art exhibits, and check out all sorts of festivals and programs. It is home to excellent art gallery, thanks to the generous donation of a small but mighty collection of fabulous American impressionist art from James Cowan. Mr. Cowan was a Chicago resident who was born in Tennessee. He passed away in 1930, leaving his truly lovely art collection to the city of Nashville to be displayed in the Parthenon. I will show you a few pieces from his collection. 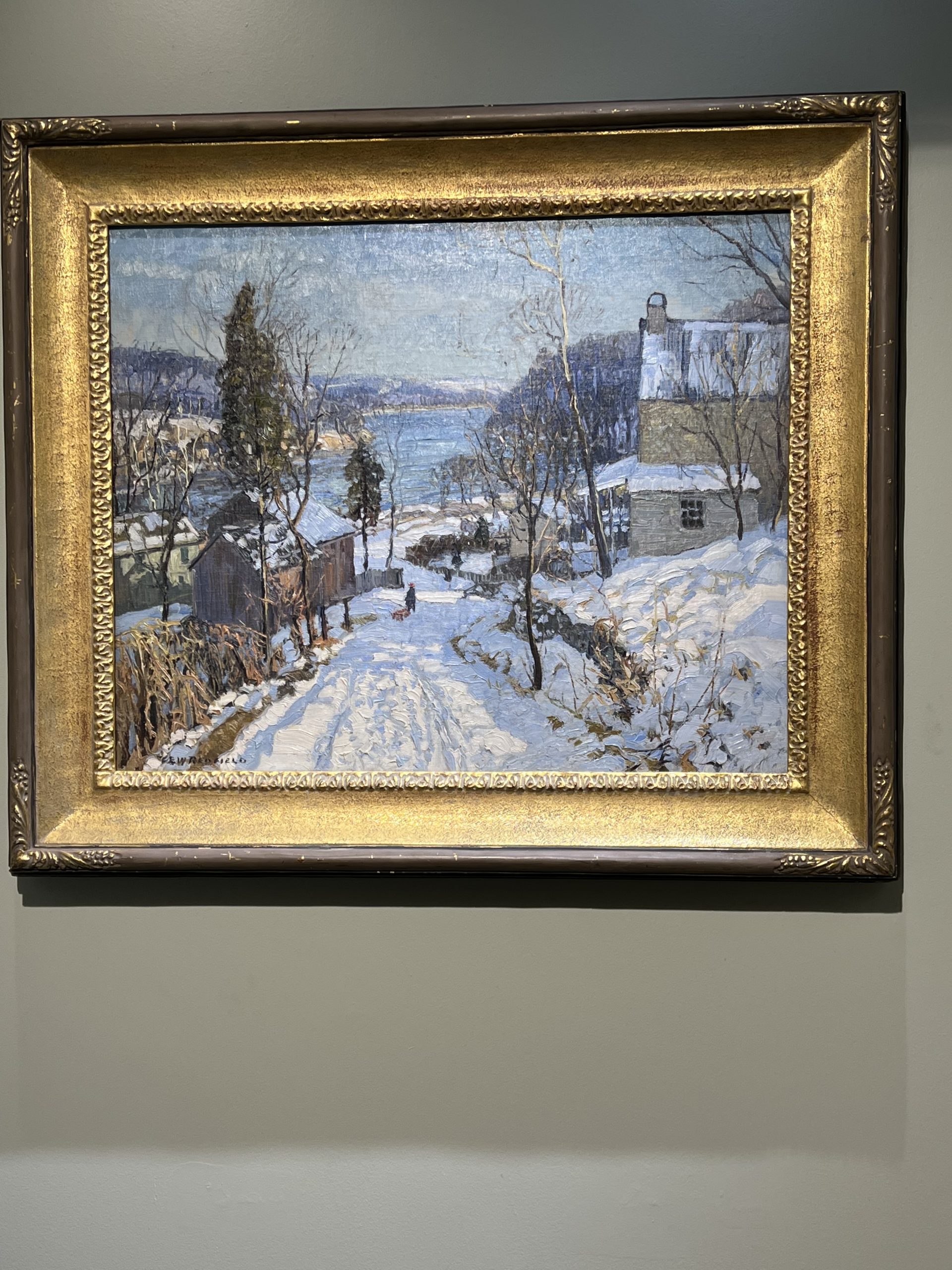 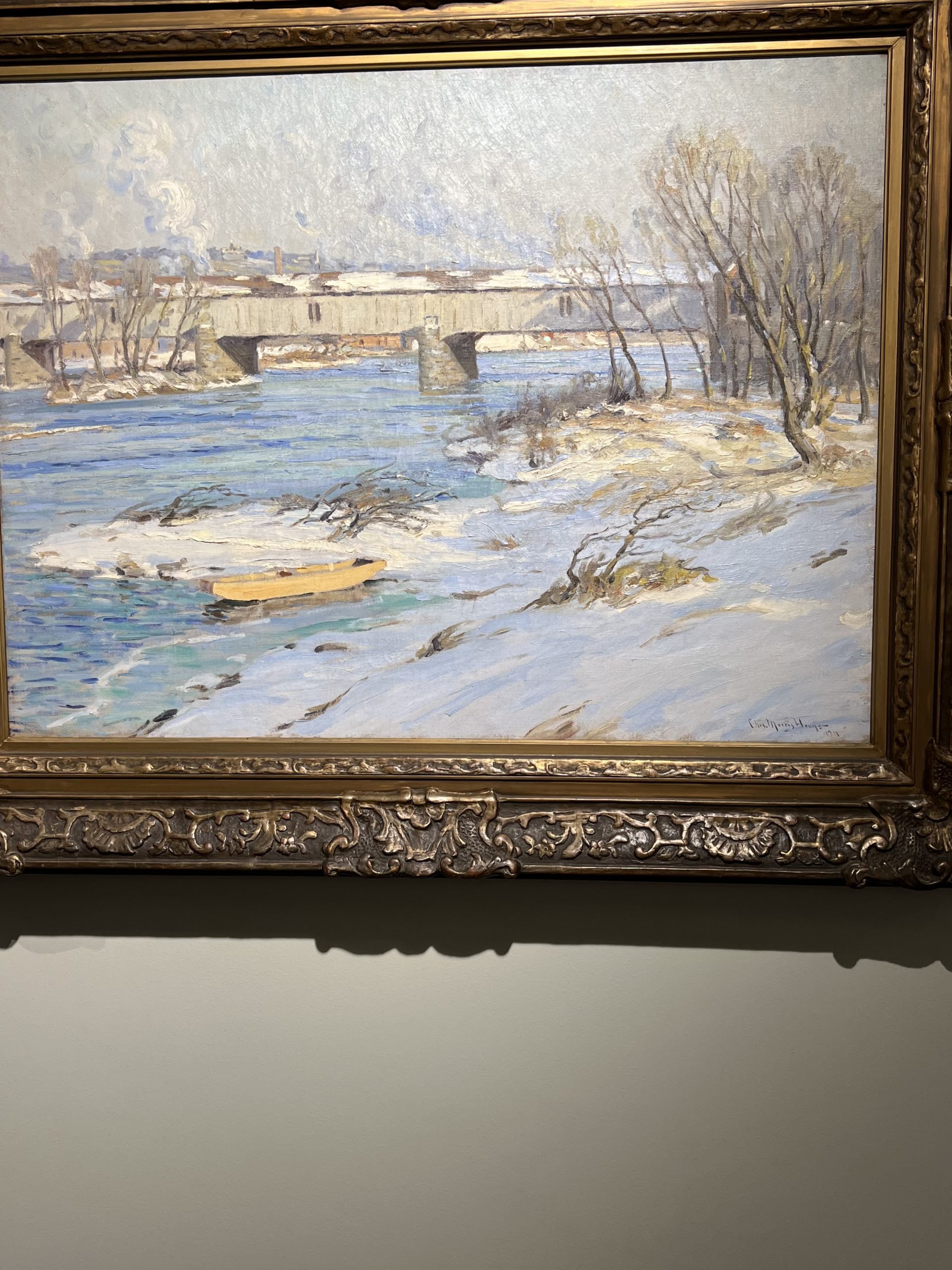 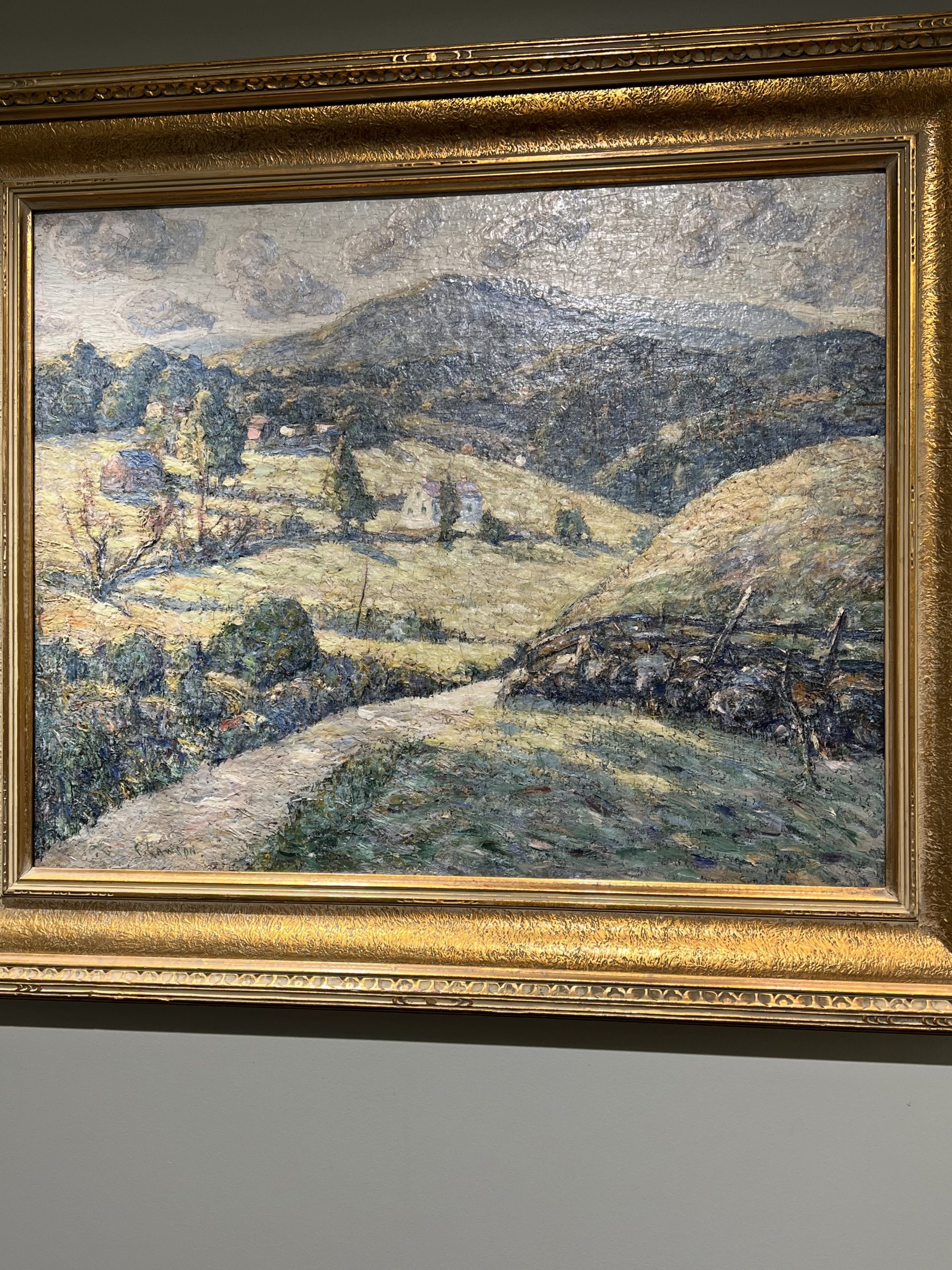 Last night at dinner, we were reminiscing about some of our favorite adventures and, as usual, our driving trips around this country always take center stage. I could go on for hours, but we loved our drive through the Deep South, our upstate New York trip, and our Midwest drive, just to name a few. There is nothing like gassing up the car, loading it with snacks and stuff, putting an audio book on the iPad, and hitting the road. And, for crying out loud, get the heck off the interstates. What’s the rush already?

Nashville’s Parthenon isn’t sitting atop anything like the Acropolis, but it is still an amazing thing to visit and well worth spending a few hours to see. I know I repeat myself, but there are so many really interesting people to meet (like Uber drivers) and incredible things not to be missed right here in the good old USA and you kid yourself if you think you have to fly across “the pond” to have phenomenal experiences.