“A Teardrop on the Cheek of Time”

“Not a piece of architecture, as other buildings are, but the proud passions of an emperor’s love wrought in living stones.”    ~~ Sir Edwin Arnold, English poet 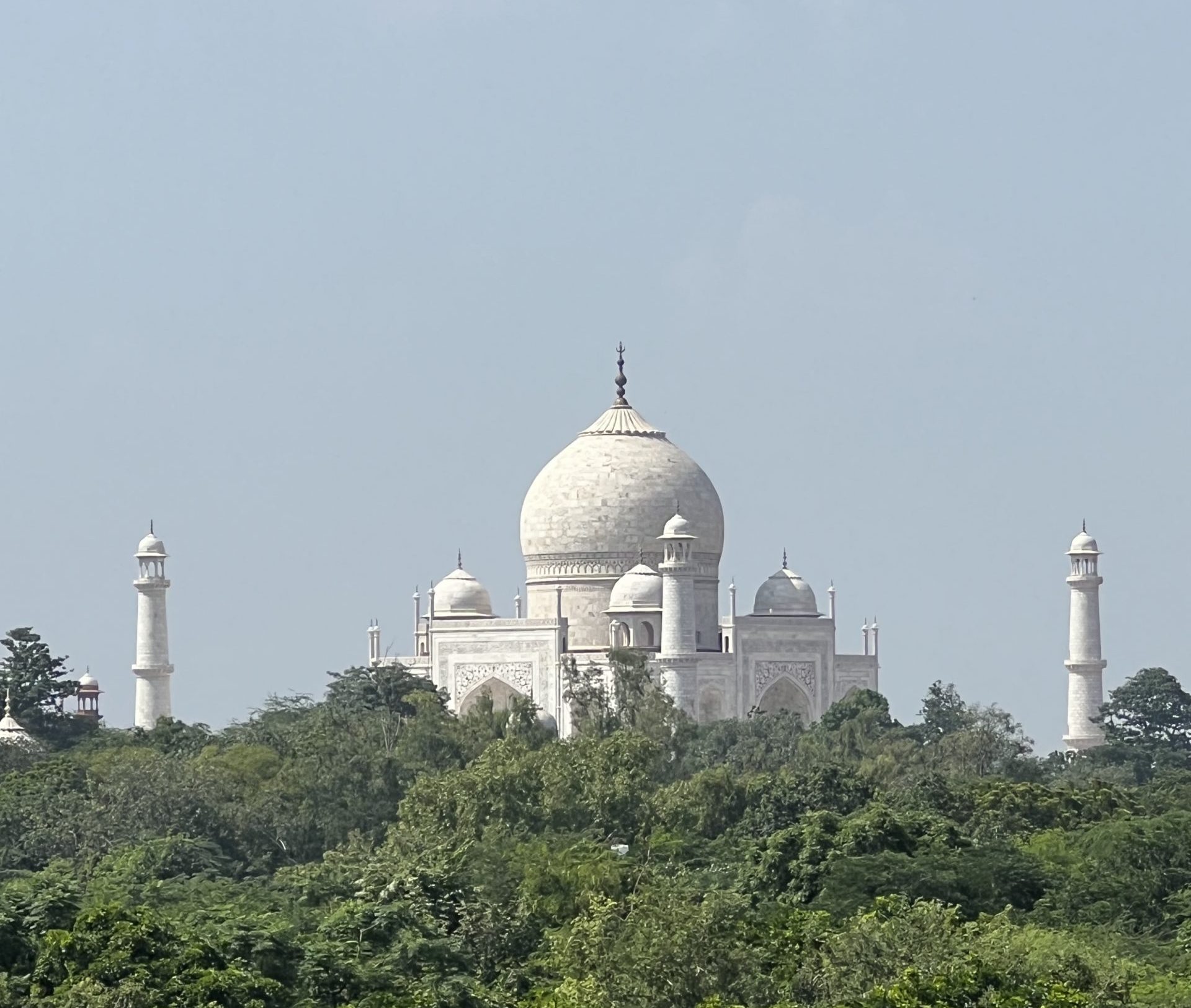 View from our hotel room balcony in Agra.

I love the quote used for this title from Rabindranath Tagore, a Bengali poet and writer. There is no question that the Taj Mahal is the most famous architectural wonder in a land where there is no shortage of phenomenal temples, shrines, palaces, monuments, and other buildings. Not a lot of other structures can make that claim. It surely is one of the most famous structures on the planet and is arguably the most beautiful building in the world, but you have probably already heard that at some point. Historically, however, it is quite impressive that it has been revered for centuries. I can’t think of too many other places that can make that claim. Like the Eiffel Tower in Paris and Big Ben in London, people the world over associate the Taj with India. I will only give one statistic about the Taj: 1.3 million people bought tickets to see the Taj in 2021, a number that seems fairly significant when remembering that the world was in the midst of the Covid-19 pandemic. If you are like me, you won’t remember numbers and stats, but you may remember just a little about the characters in this real life and death drama, so I’m heading in that direction with this post. You may be thinking that you already know the story, but there is more to it than the one sentence synopsis we all learned as children and I think you might find it interesting.

Shah Jahan, born “Prince Khurram” in 1592, was an emperor in the Mughal Empire. His coronation as the fifth emperor of the empire was held in 1628. He was a fierce warrior who executed any rivals. This man had a passion for building that was almost an obsession. Mughals were avid builders. To see many spectacular examples of Mughal architecture, look no further than New Delhi. Although Agra was the capital of the Mughal empire during the reign of Shah Jahan, Delhi was the capital of the Mughal Empire for centuries; there are many fabulous examples of their construction prowess there. But Mughal architectural achievement reached its amazing zenith while Jahan was emperor. Jahan was a devout Muslim, but during his time as emperor, he was surprisingly tolerant of his Hindu subjects. He encouraged literacy and arts and it is said that he elevated the culture during his reign. His jewel collection was second to none at that time.

When Shah Jahan married Mumtaz Mahal, he already had two other wives, but there was no doubt that Mumtaz Mahal was his favorite. He really didn’t have much to do with the others besides fathering a child with each of them. Their unions were primarily political in nature and the other wives were basically wives in title only. Jahan and Mumtaz were married in 1612 and their nineteen year marriage was a very happy one. Mumtaz was a beautiful learned woman; she was considered cultured and talented. She championed the causes of the needy as well as scholars and their families. The Shah respected her and sought her advice on state matters not traditionally discussed with wives. It was not unusual for her to speak to him on behalf of others. Only she could convince him to forgive enemies and commute death sentences. Mumtaz was given more allowance than the other two queens and she was also gifted land and properties. Her residence was much more opulent than the homes of the other empresses. She and Jahan lived together in the Khas Mahal, which is part of the Agra Fort, and her home was decorated with pure gold and precious stones. Together than had a huge family. She died in 1631 of postpartum complications after giving birth to their fourteenth child in nineteen years. Jahan was hopelessly inconsolable. He went into seclusion and mourning for a period of one year.  When he emerged from his seclusion, his beard and hair had turned white and his body had aged well beyond his years.

Before the death of Muntaz, Shah Jahan made four promises to her. He promised to build an everlasting symbol of their love, to not marry again, to take care of their children, and visit her tomb each year on the anniversary of her death. Mumtaz was laid to rest in her incredibly beautiful mausoleum in 1653. The entire Taj Mahal complex, forty two acres in size, was constructed between 1631 and 1653 by some 20,000 workers from far and wide. Craftsmen came from faraway places such as Uzbekistan, Persia, Syria, and Pakistan. One thousand elephants were used to transport the materials. Shah Jahan began construction on the Black Taj, a black marble mausoleum that he had planned for his own interment across the river from the white marble Taj Mahal. His plans included a bridge between the two structures.

Shah Jahan fell ill and his sons began fighting each other for the emperorship. His son, Aurangzeb, was victorious in the family feud. Aurangzeb threw his brothers in jail, beheaded them, and went on to depose his father in 1658. He imprisoned Shah Jahan in Agra Fort for the rest of his life. He died in confinement in 1666. He could see the Taj Mahal from his chambers, but because of his imprisonment, he was not able to keep the last promise he made the Mumtaz. He was never again allowed to visit her tomb on the anniversary of her death. Upon his death, his son had him rather unceremoniously buried in the Taj Mahal next to Muntaz. However, it is obvious because of the way the tombs are positioned that the original plan was not to have them entombed side by side. Symmetry and balance were most important hallmarks of Mughal construction, so it is particularly telling that Mumtaz’s coffin is centered in the space and Shah Jahan’s simple coffin (well, simple by Mughal standards) was placed to the side of it.

We were surprised to find that we were excited to be able to see the Taj Mahal. I guess I had expected us to have more a jaded reaction to going to Agra, but we both were genuinely thrilled to see something we had heard about all our lives. I think our entire group reacted to the first glimpse of the Taj like people who had waited their whole lives to see something for the first time. There was the briefest moment of stunned silence followed by the reaction that seems to define our generation: all cell phones up! Let the snapping commence! We had the incredible opportunity to go to the Taj by golf cart at late in the afternoon for sunset and then we returned at daybreak this morning to see it bathed in the glow of the dawn of a new day. We took pictures outside the mausoleum, but it is forbidden to take pictures inside. The Taj Mahal has been called an Islamic jewel in a country that is predominantly Hindu, but it would be a jewel wherever it was built. Of course, the pictures don’t do it justice, but I will share them anyway. 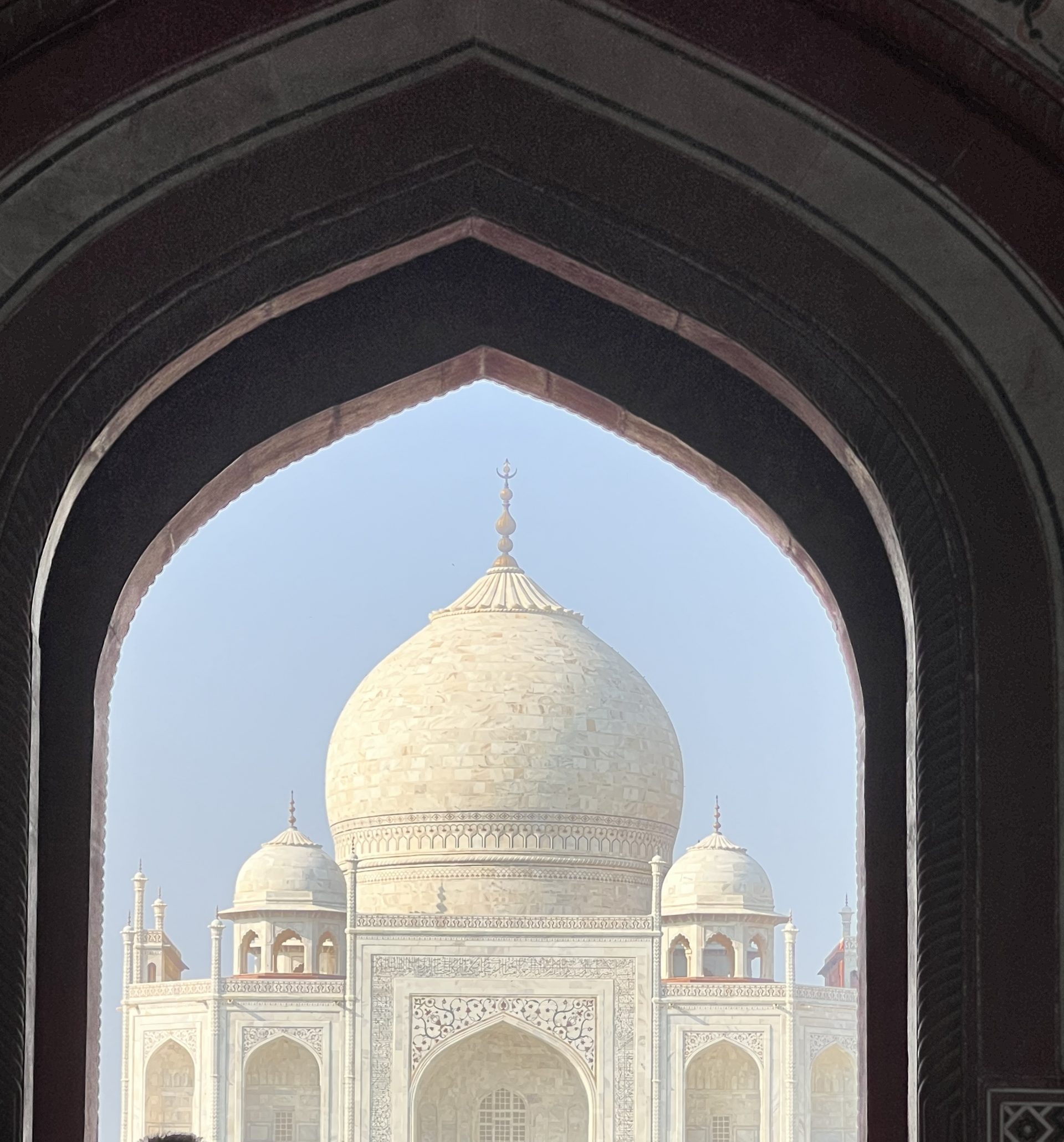 First glimpse of this incredible structure. It is more beautiful than we ever imagined. 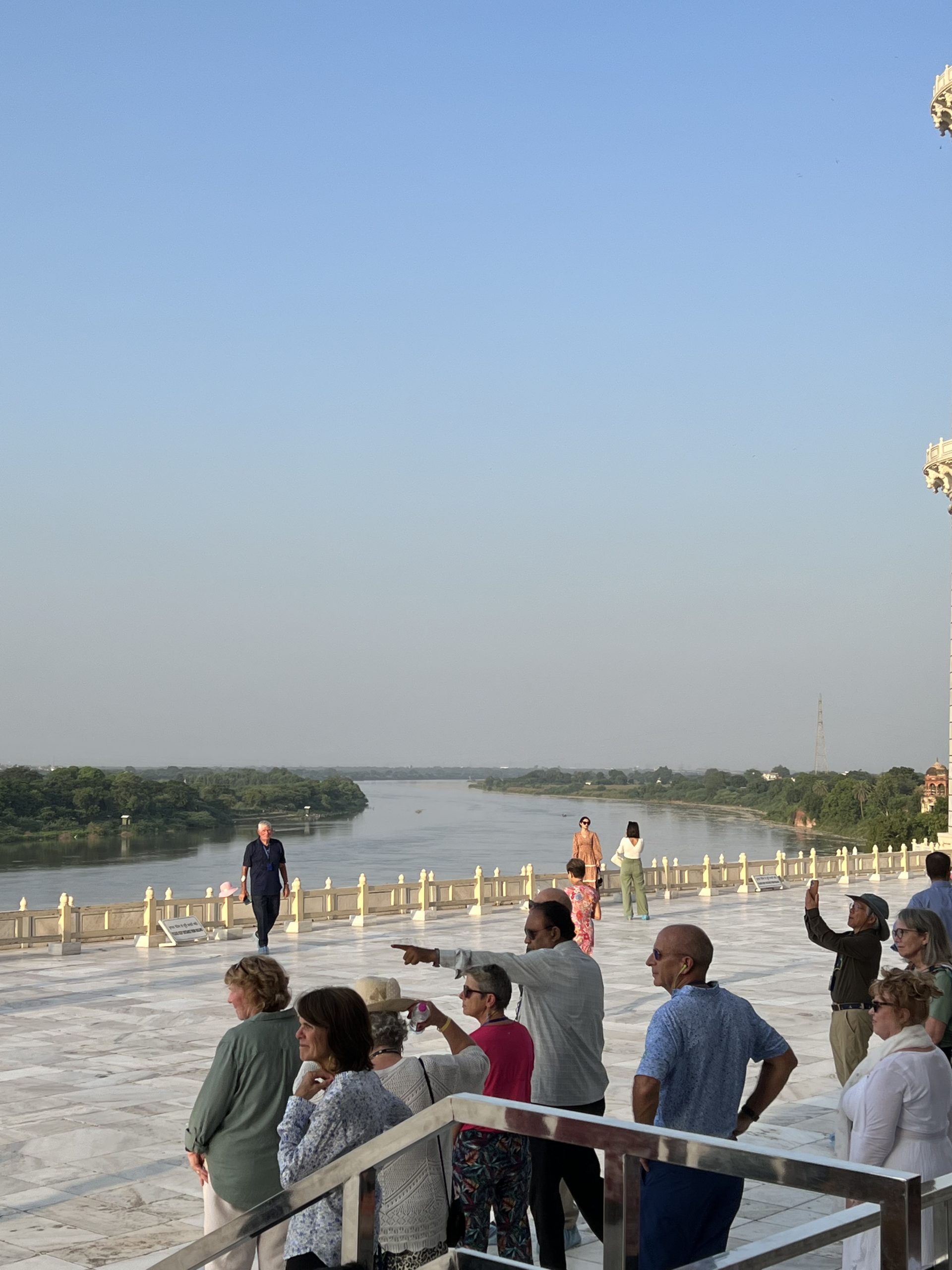 The Taj sits regally on the banks of the Yamuna River. 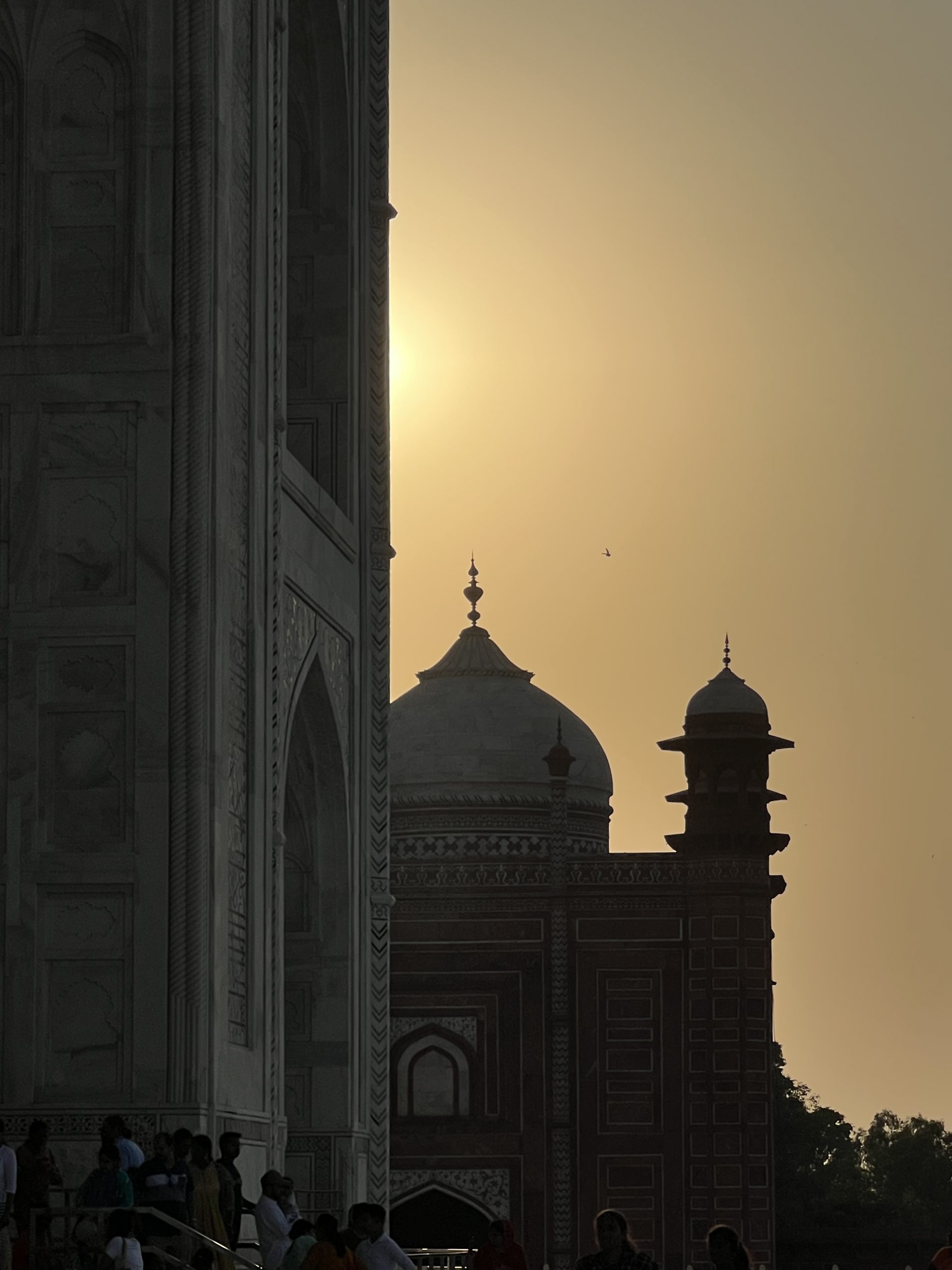 There is beauty all around the Taj. 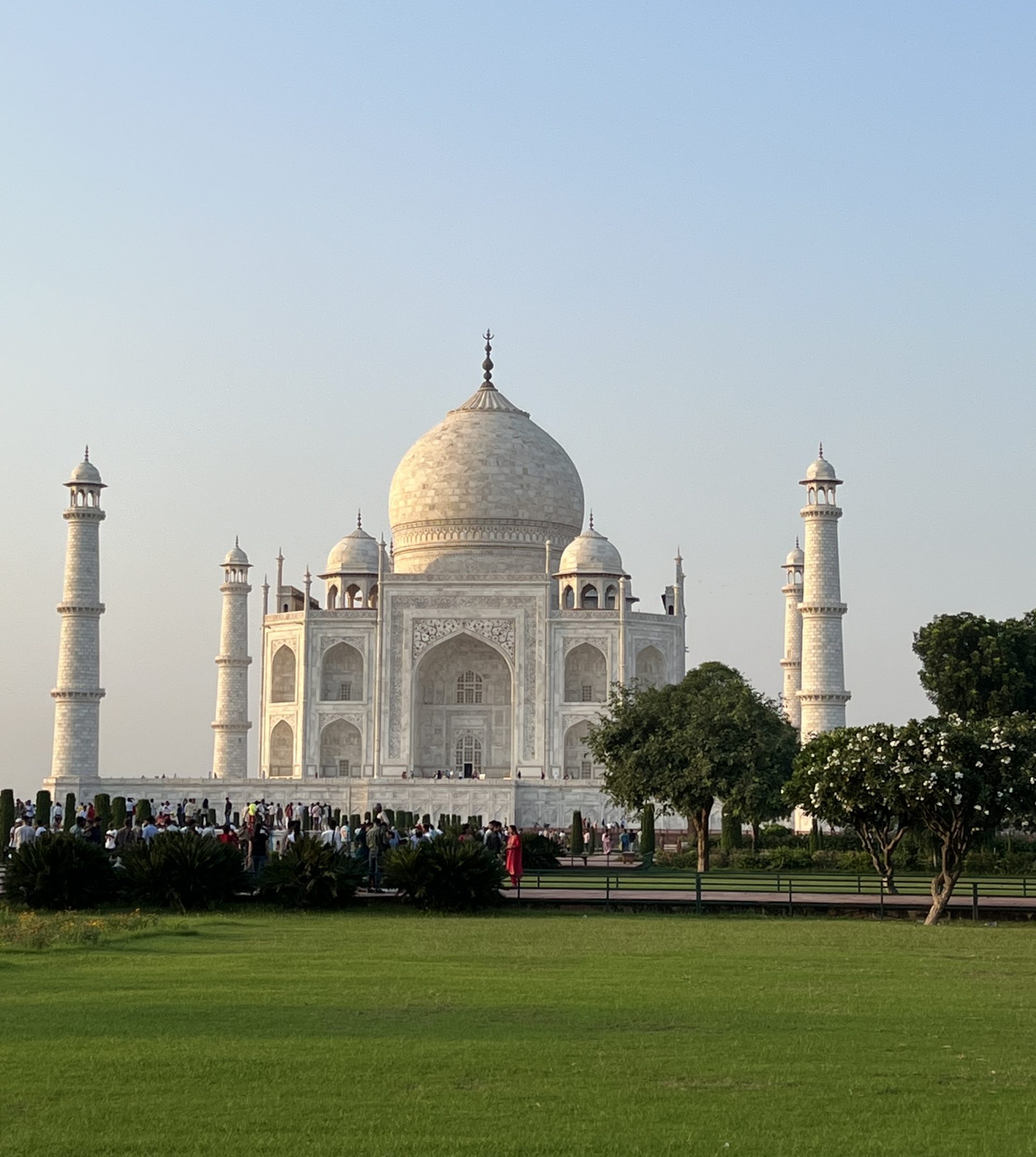 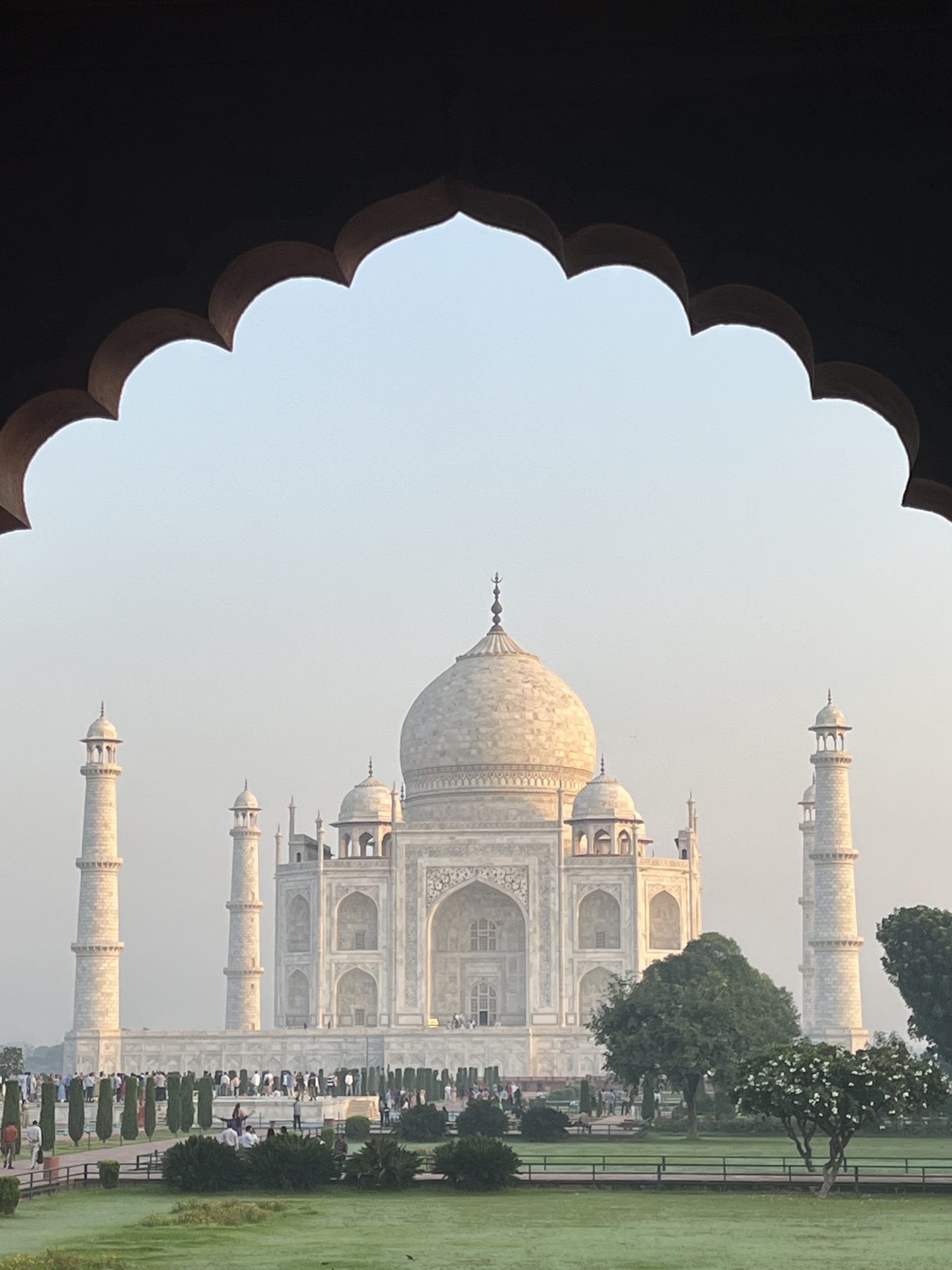 Early morning at the Taj. 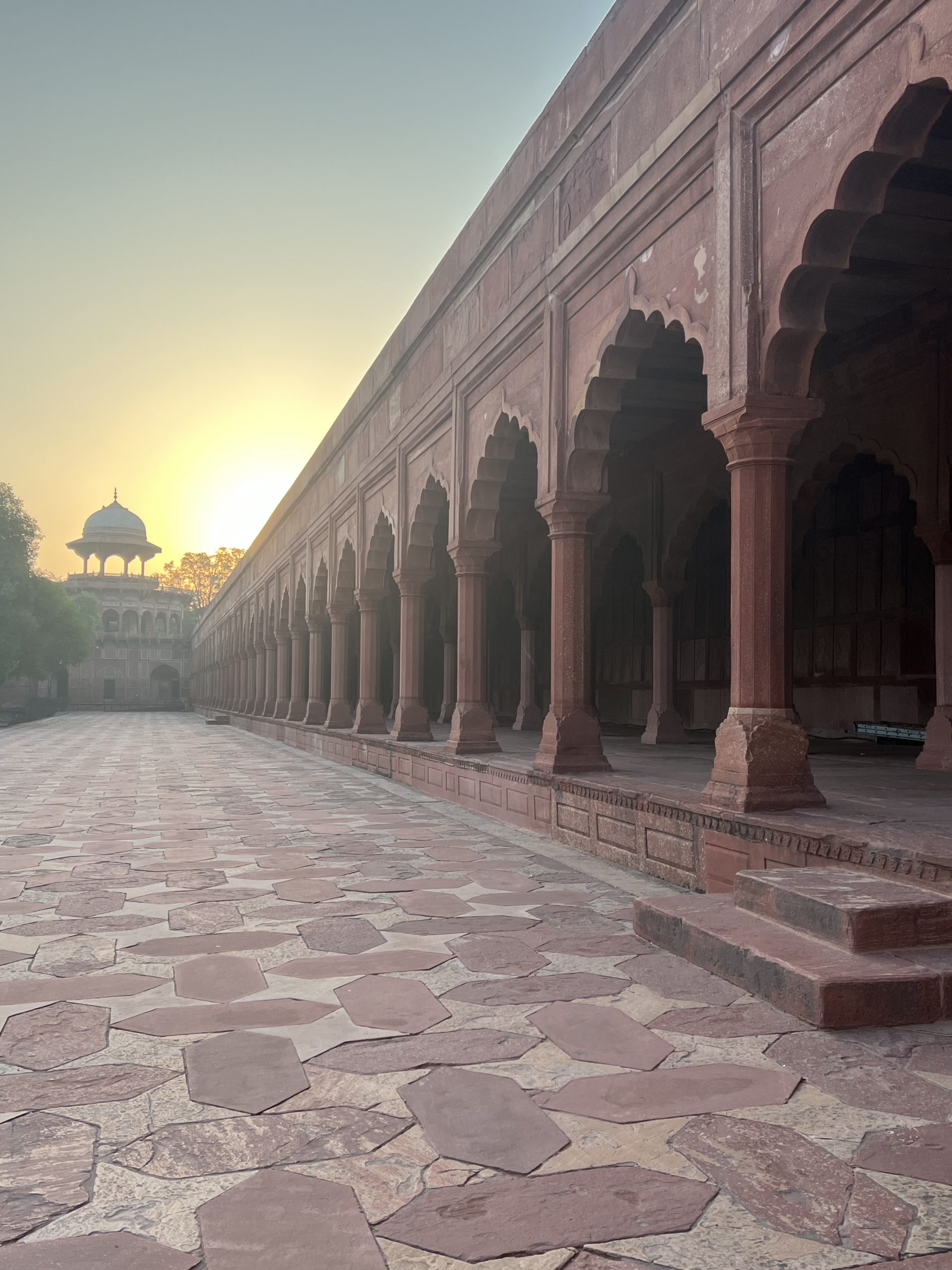 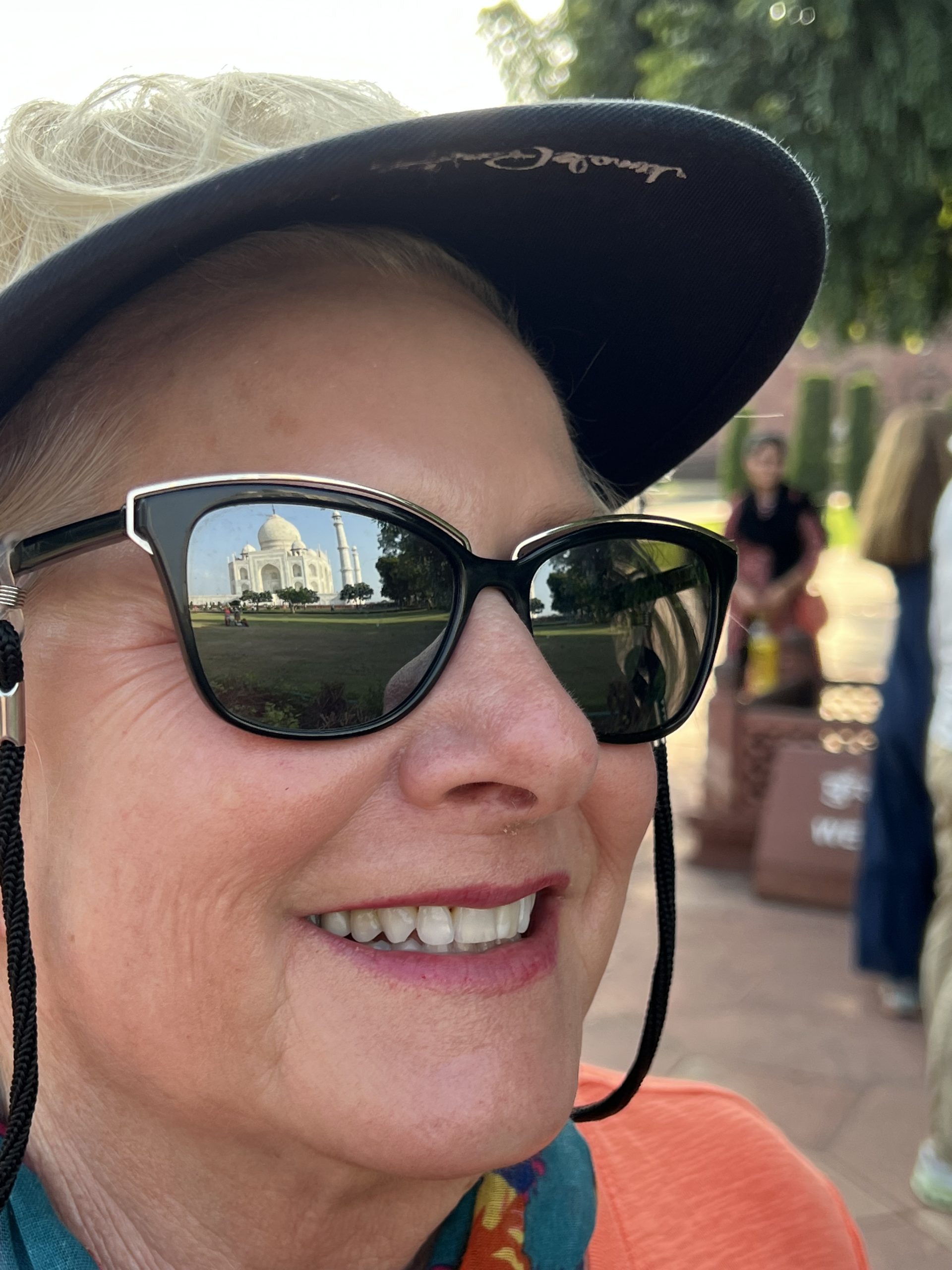 You see the Taj everywhere.