Last evening, Hemesh, our cruise manager, told us that today we would visit what was once the richest city in all of the world. That is quite a declaration and we were a bit skeptical since we are in rural India and West Bengal doesn’t look like the home of a very prosperous city. Not in the past; not in the present; not in the future. We did, however, find upon our arrival in Murshidabad, the remains of a surprisingly cosmopolitan city. The architectural masterpieces of the town are stunning although they have seen better days and seem out of place in rural India. There are dramatic structures that once were whitewashed Bengali terra cotta, but now they are just remnants of their former glory. Murshidabad prospered in the eighteenth century and was home to many important and wealthy families in the banking business. It’s population peaked in the 1750s. Silk was a major product of Murshidabad, so trading was important and many merchants populated the area. As the capital of a subdivision of the Mughal Empire for seventy years, it was the richest Mughal province. Arts and culture were important components of Murshidabad and the ivory carvers here were considered top notch. The city began to decline after the defeat of the Nawabs by the English at the Battle of Plassey in 1757. In 1760, thirty five year old Robert Clive (AKA Clive of India) absconded with a fortune well over forty eight million pounds (in today’s money) and sailed to England. Essentially, Robert Clive turned the lights out in Murshidabad. 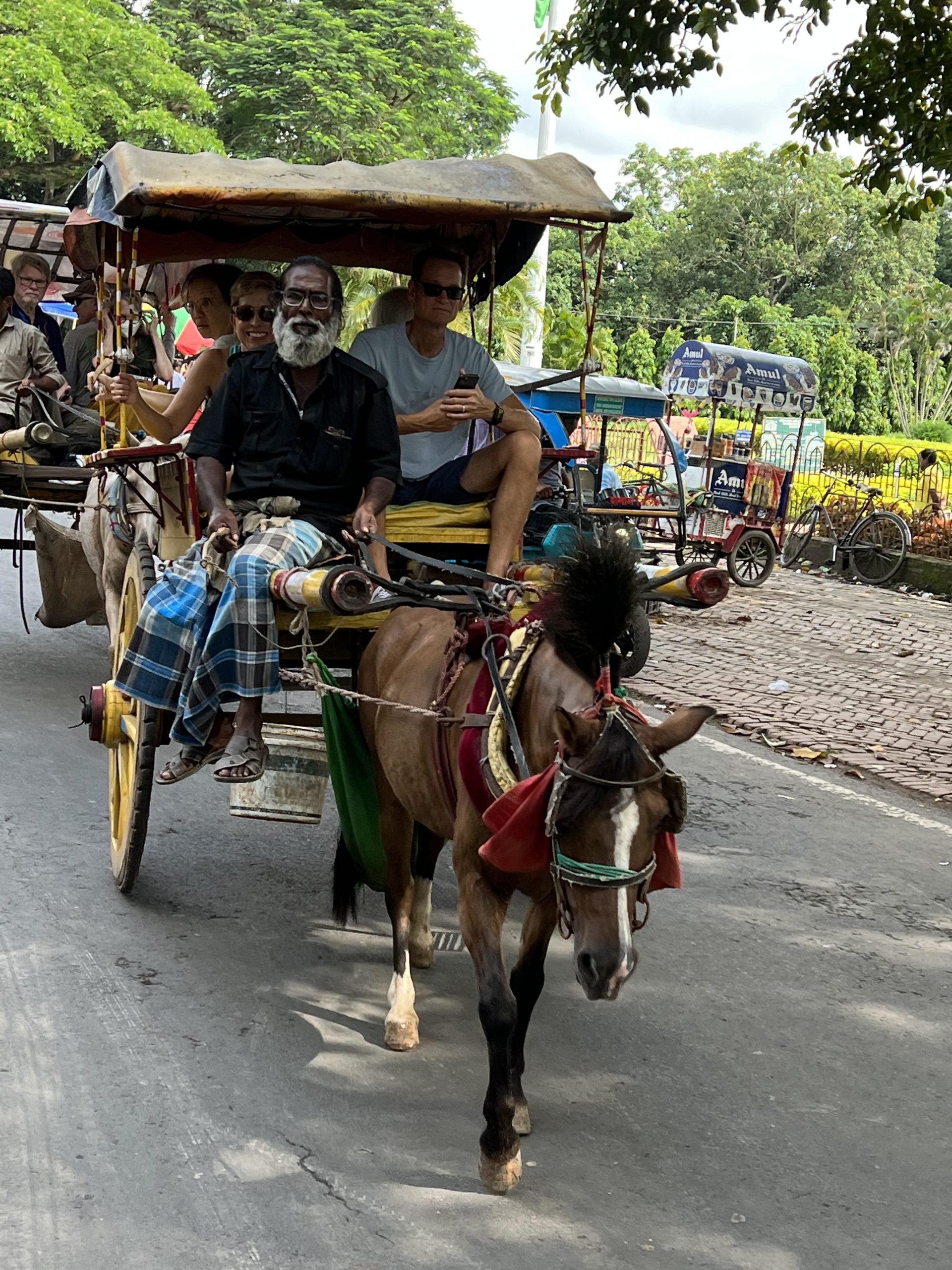 We were met by horse carts which delivered us to the Katra Mosque. It isn’t used as a mosque anymore, but it is still used for Friday prayers. Built between 1723 and 1724, it is the oldest mosque still used for Friday prayers in India. We stopped in at the Hazarduari Palace, now a museum, for a look at wonderful colonial-era antiques, artwork, weapons, and manuscripts. 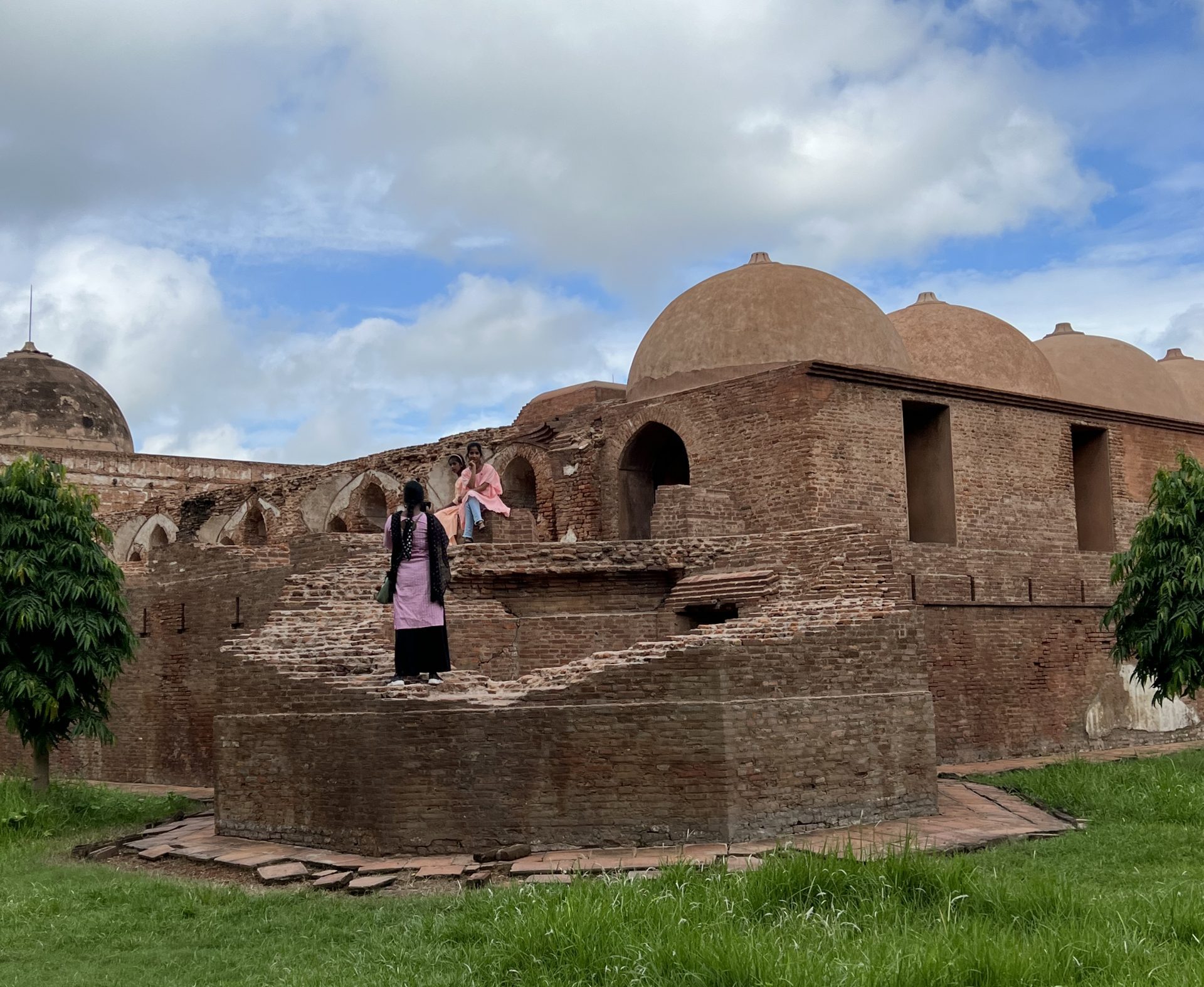 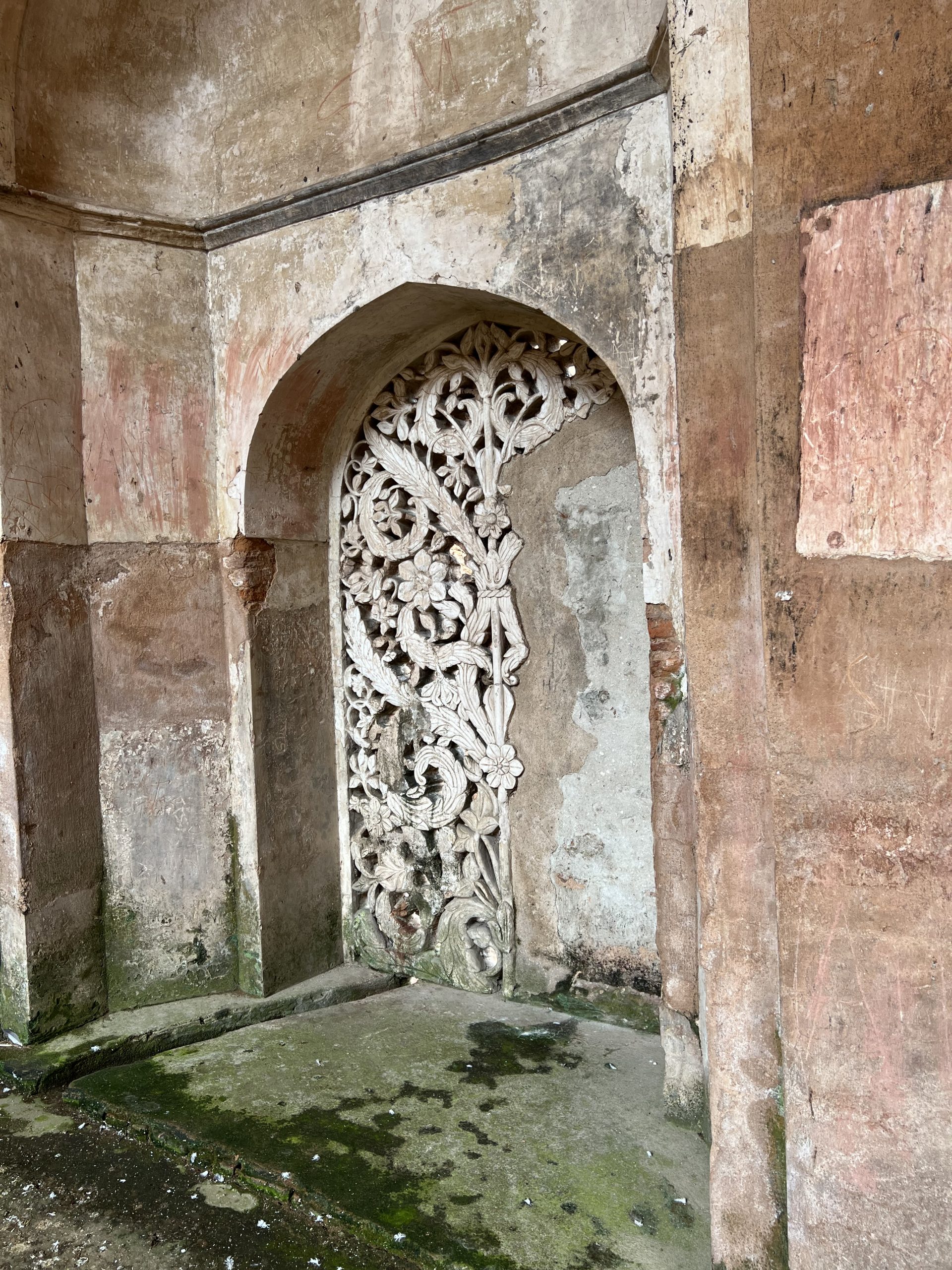 Imagine how beautiful this carved door was when Murshidabad was in its heyday!

The dome collapsed a very long time ago. 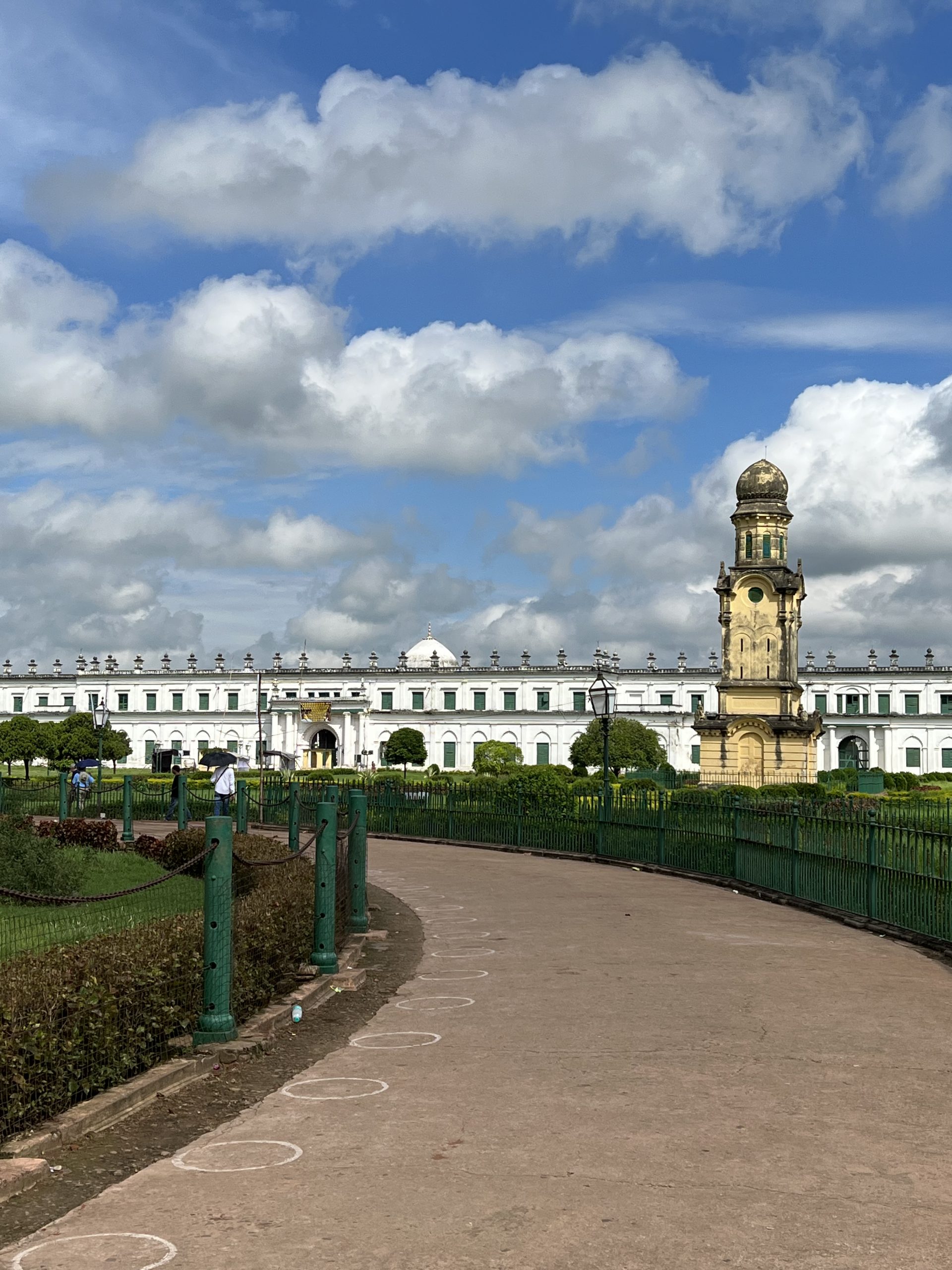 We walked back to our ship, the beautiful Ganges Voyager II, and pushed off for Baranagar. There, a sampan was to transport us to a cricket game between the bar staff and the housekeeping staff. It was a tough call, but in the end, we decided to support the bar staff since Happy Hour is coming up soon. Unfortunately, a rainstorm moved in and the game was canceled. Fortunately, Happy Hour was moved up to an earlier time, so all is well in the end. 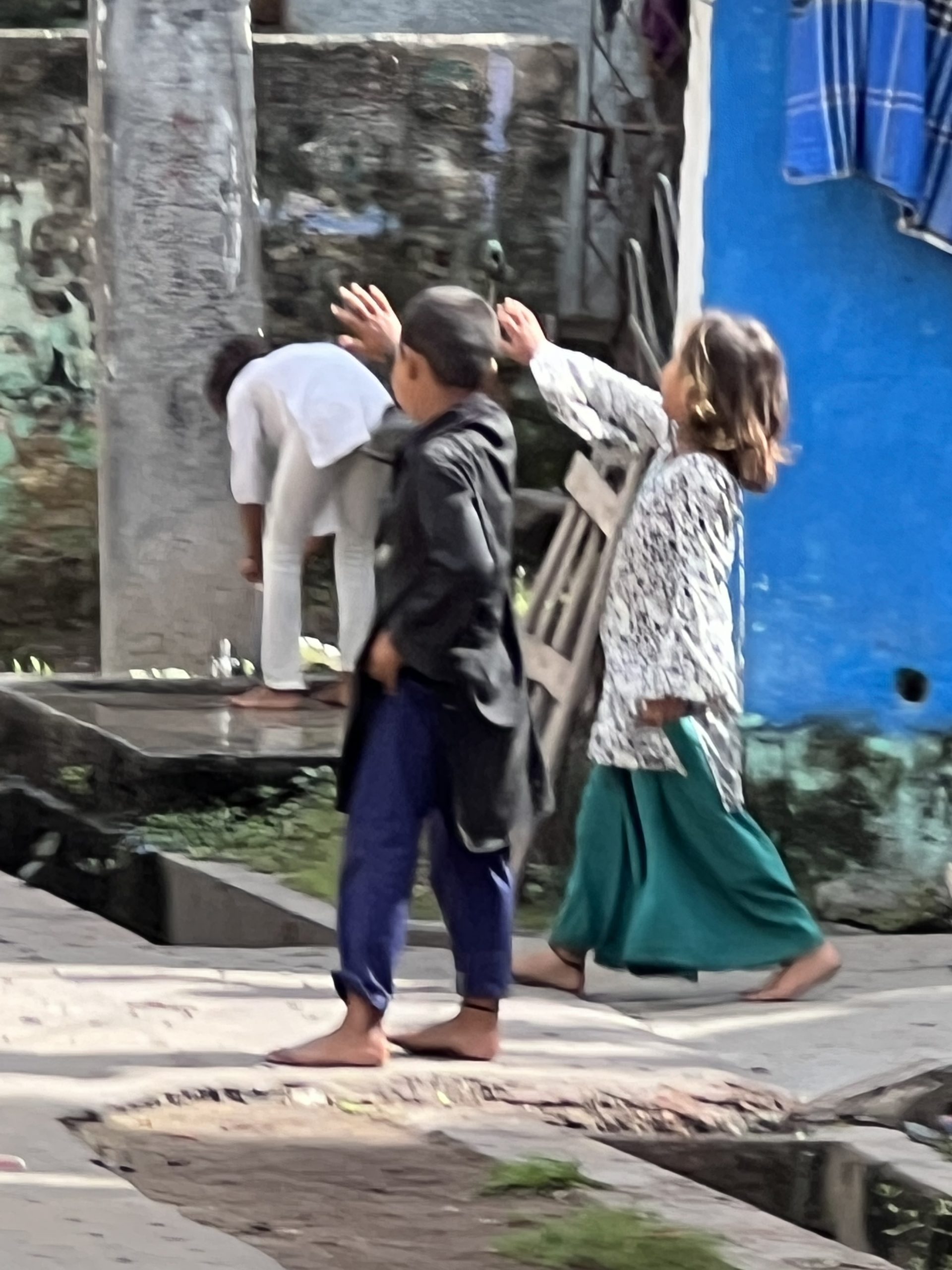 The locals have been very excited to see the return of tourists with money to spend. Our river cruise is the first that Uniworld has made since the pandemic began. Some of these children are young and have probably never seen white people. We actually startled a cow yesterday. He was standing amidst cars blowing horns and motorcycles whizzing by but startled at the sight of white people. Our guide says that cows are just not used to seeing us and that we scare the animals!