The Idols of Kumartuli

Kolkata, or Calcutta, as the British called it, just wrapped up yet another festival celebrating yet another god. This is apparently the season of big festivals honoring the VIG (Very Important Gods); it’s time to celebrate the  bigwigs of the Hindu religion. The Hindu faithful have festivals for too many gods to count, but many of them are for lesser gods. It has been fun to go around the city and see all the decorations that are being taken down. It must have been a doozy of a shindig.

Kumartuli is the area of town where the artists and craftsmen work to create the effigies or idols that are central to the merrymaking. The skills are passed from father to son. There are many steps in the process of creating these works of art and constructing some of them can take two months from start to finish. Most of us have probably never given any thought to these idols as art, but there is no denying that they are fine art to the believers. Sadly, they are thrown into the Ganges when the festival is over. I say “sadly” for several reasons, but mainly because the Ganges really doesn’t need anything else thrown into the water. Be that as it may, next year the process will begin anew. I will show you the pictures of the steps taken to create these elaborate sculptures and I also have a picture of the god’s trip to the river. It was especially cool that, as we were driving out of the city on the way to Varanasi yesterday, we came upon a procession of big trucks taking away all the remnants of the festivities to the river. 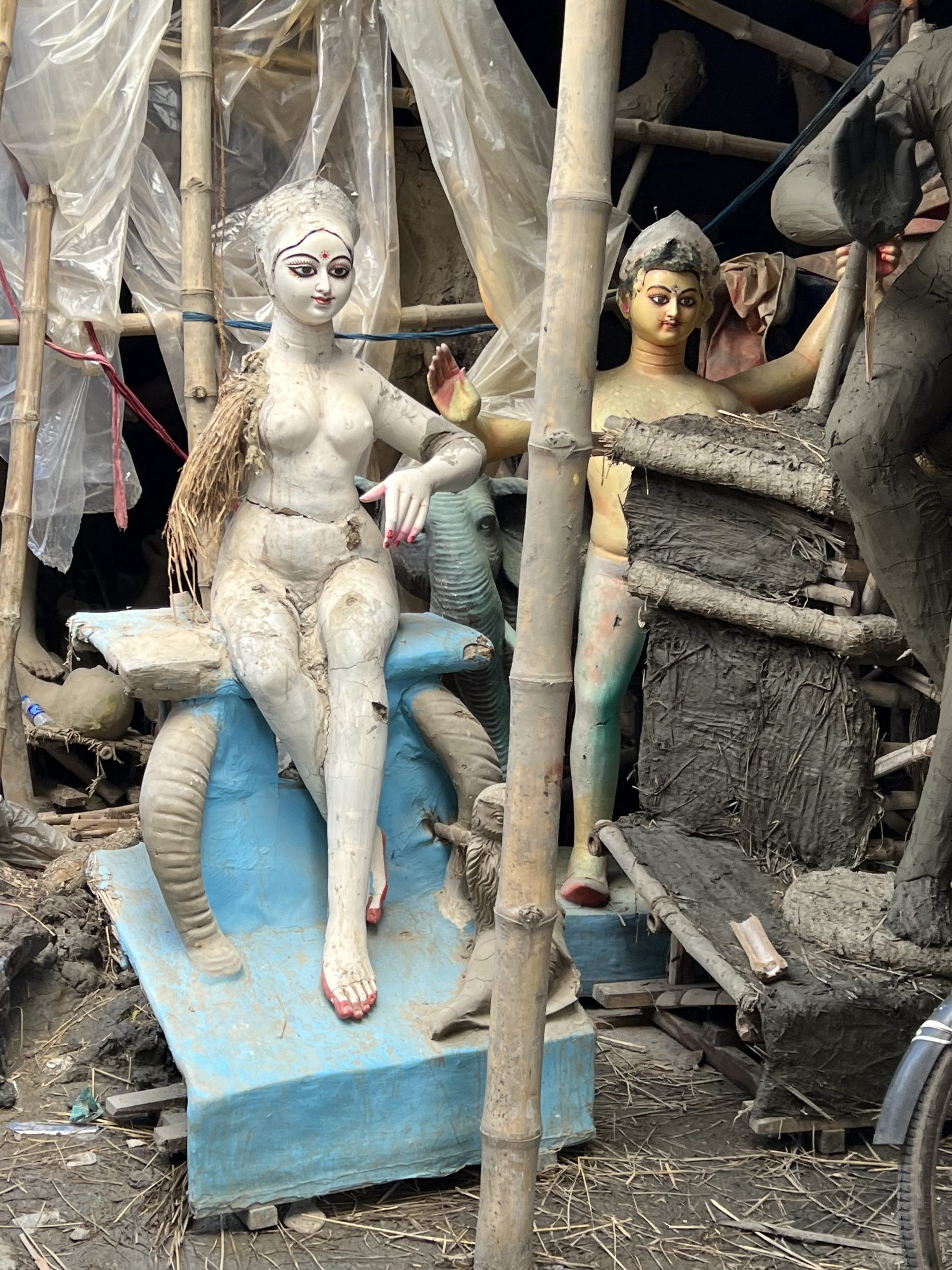 The very first step in fashioning the figure from straw as you can see from the right arm. 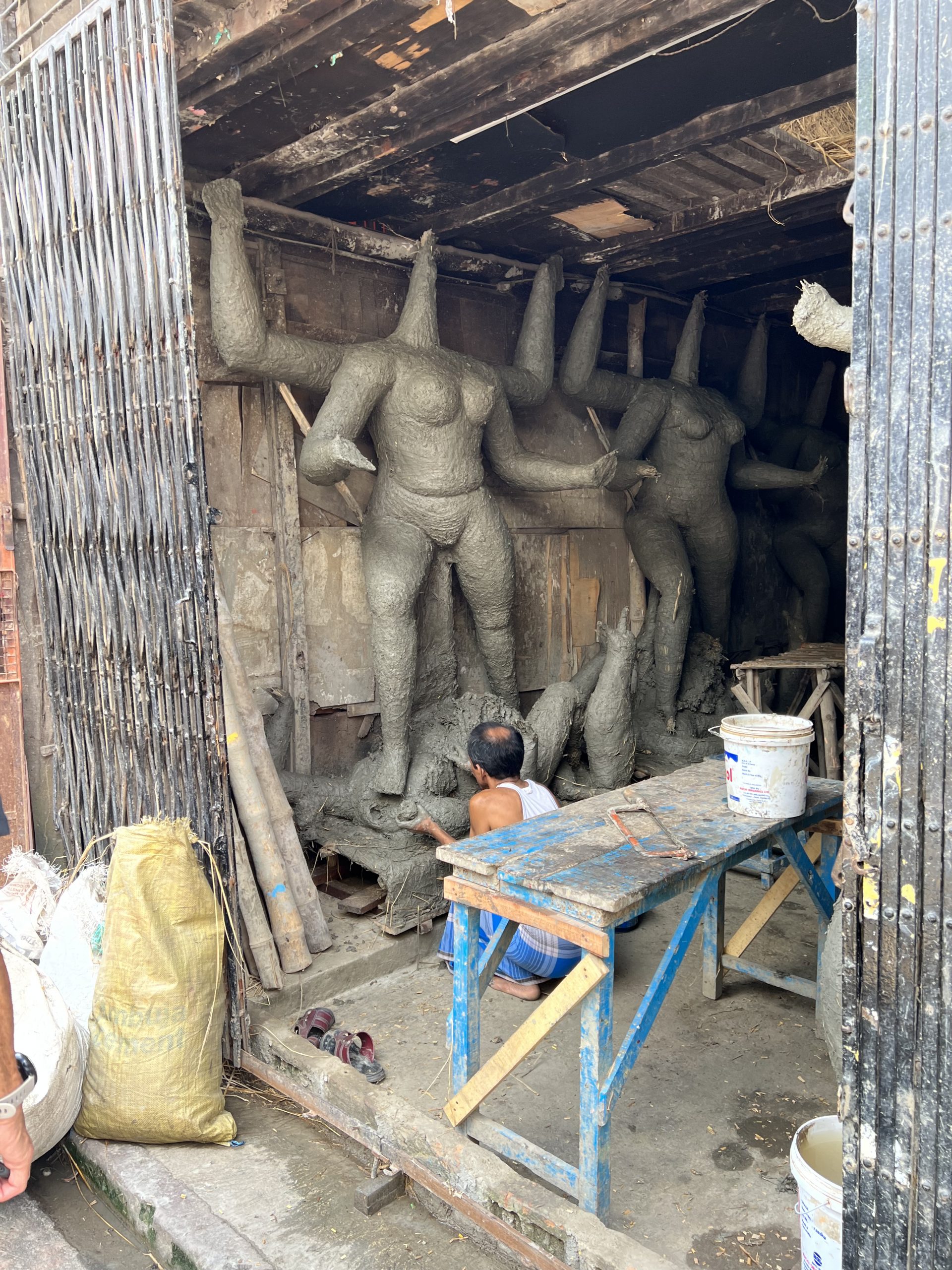 Next, the entire straw body is covered in clay. After that, it must dry completely. They dry in the sun; no dryers are used, so it takes a while to get ready for the next step. 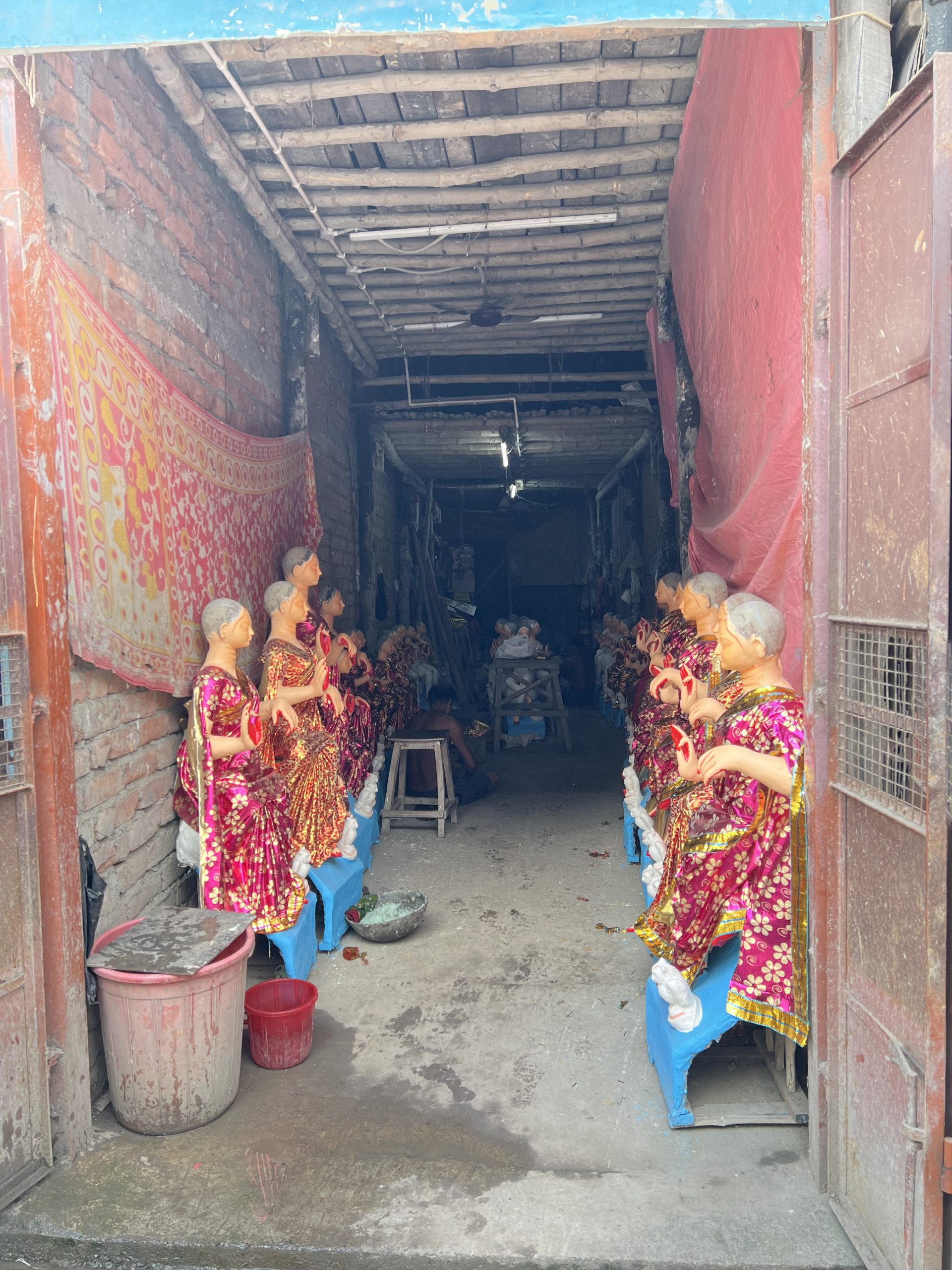 Then comes the time consuming and painstaking process of painting and dressing in the appropriate costumes. There are even areas where people supply the jewelry necessary to adorn the god or goddess. 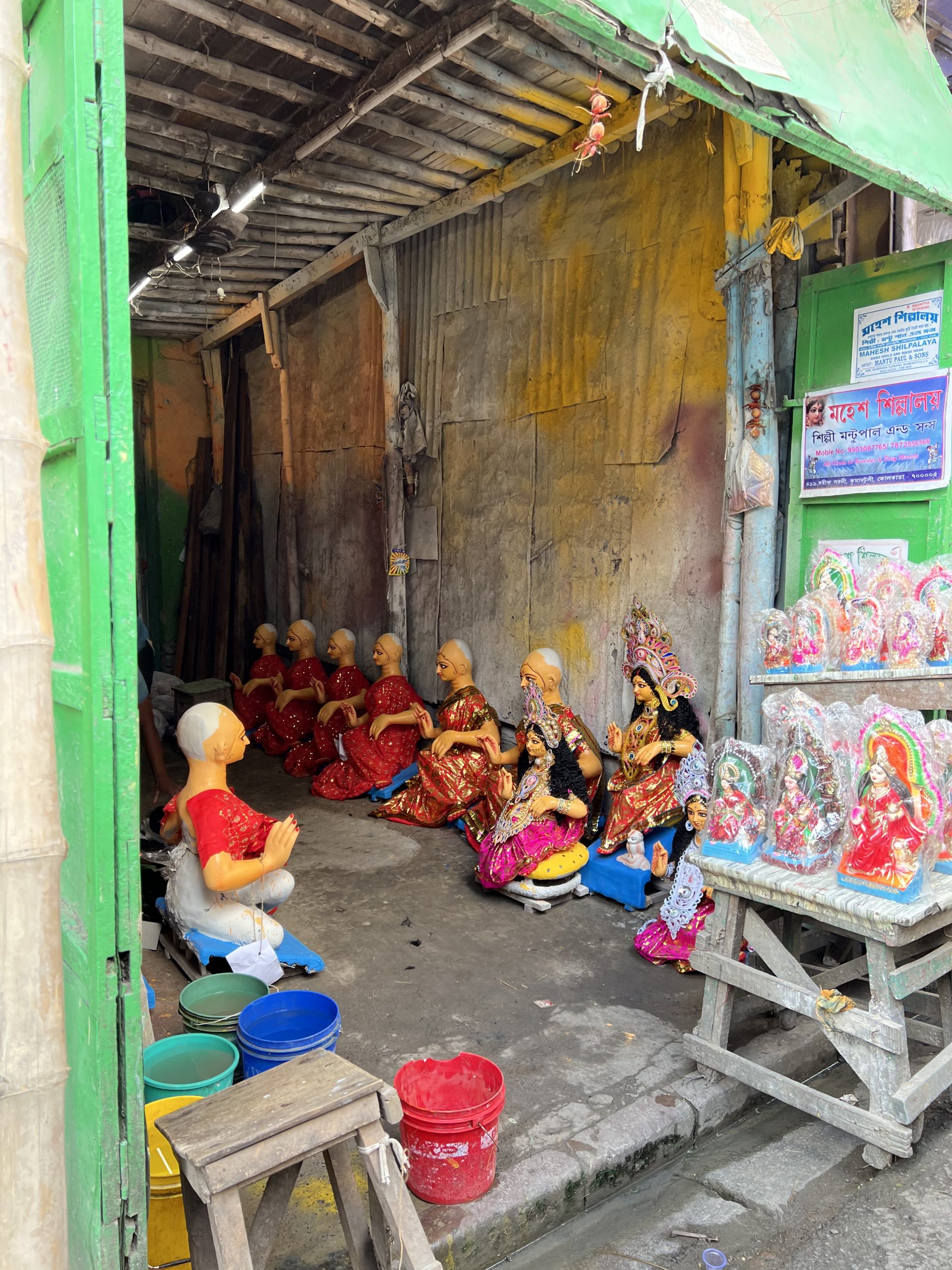 On the right you can see some small statues. These are actually made of plaster in molds for home use. They, too, are thrown into the Ganges. 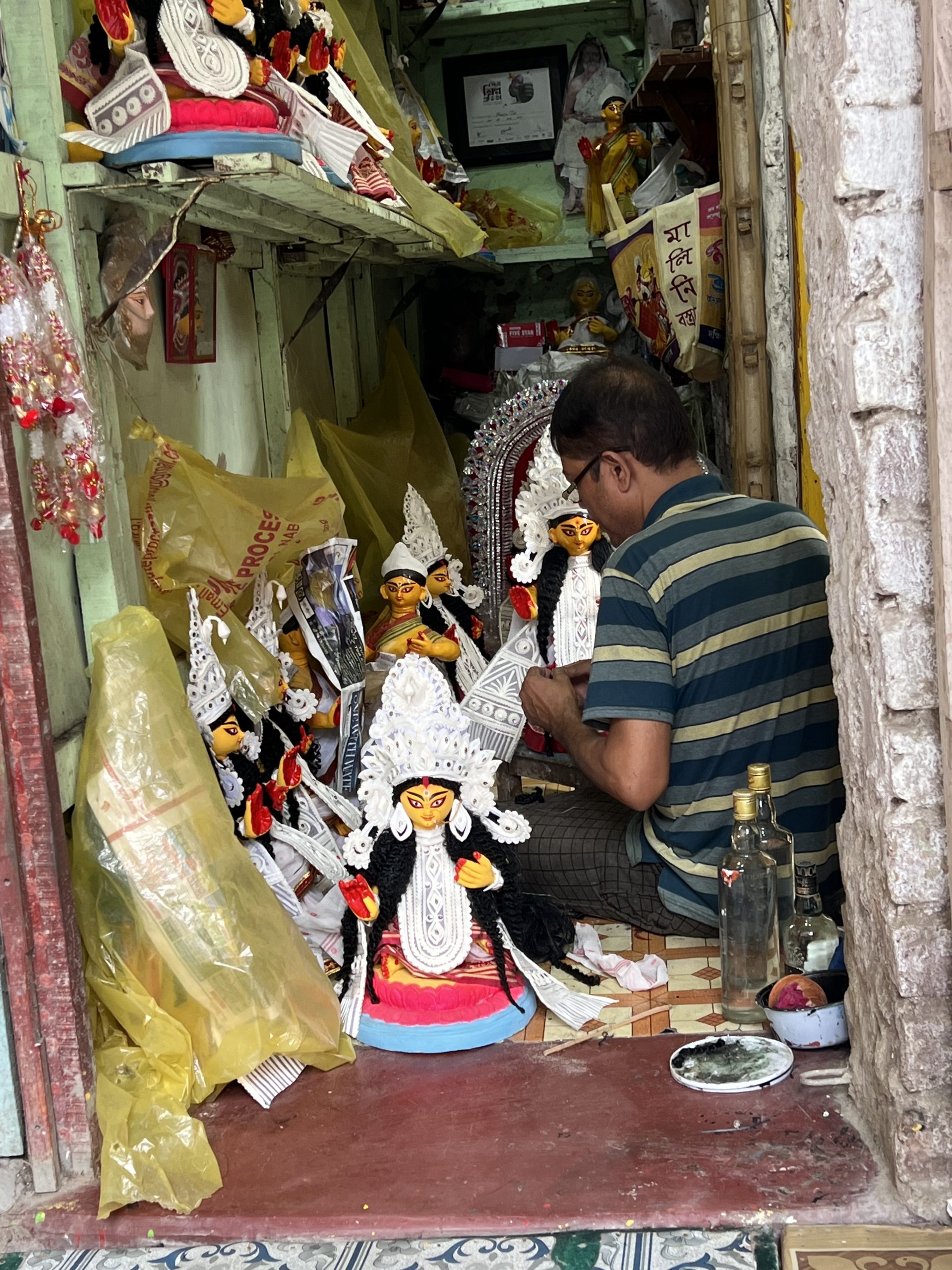 This man is adorning the idols with headpieces. 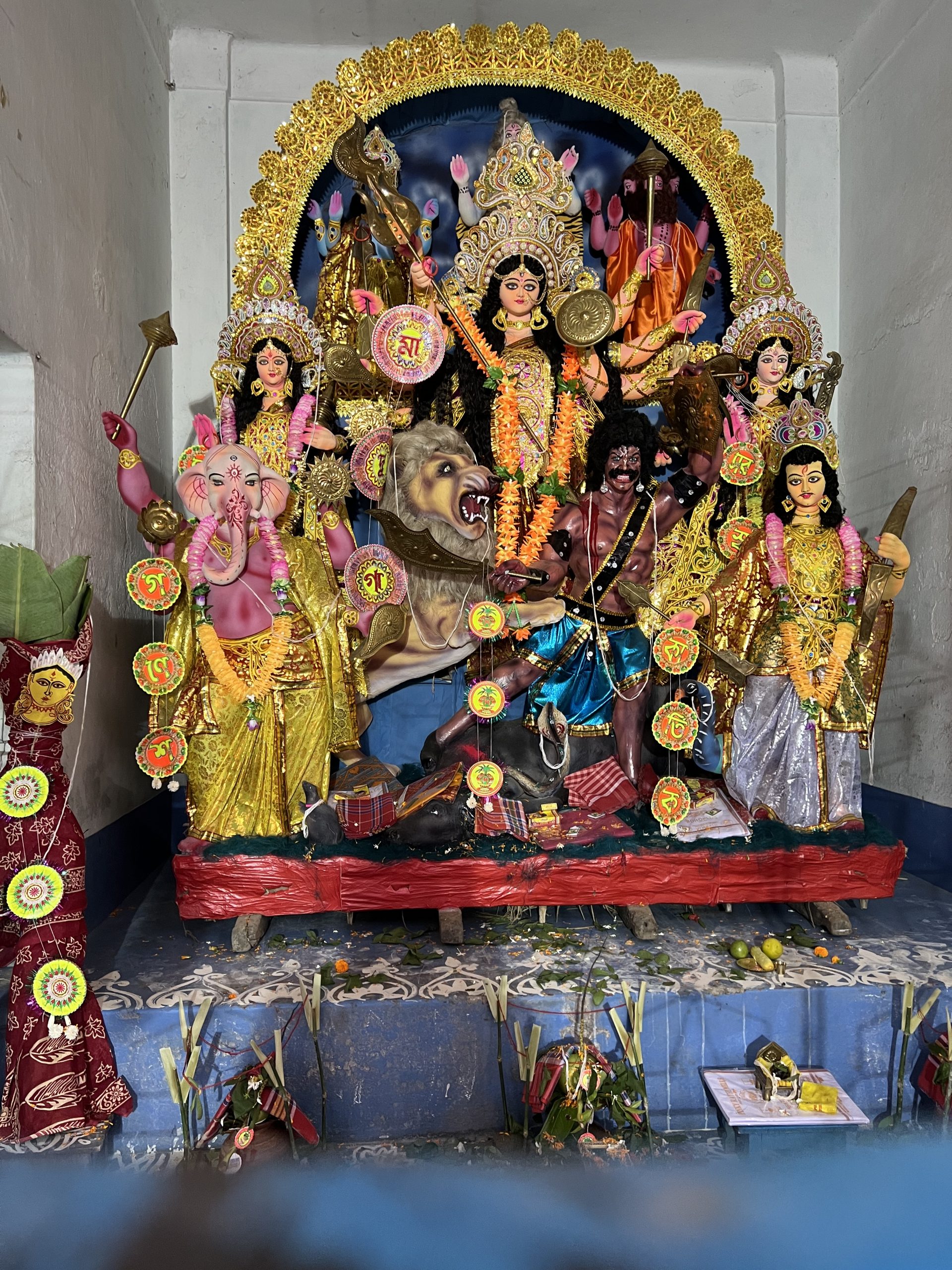 This picture is from the last festival, but you can see the finished idol in a shrine. 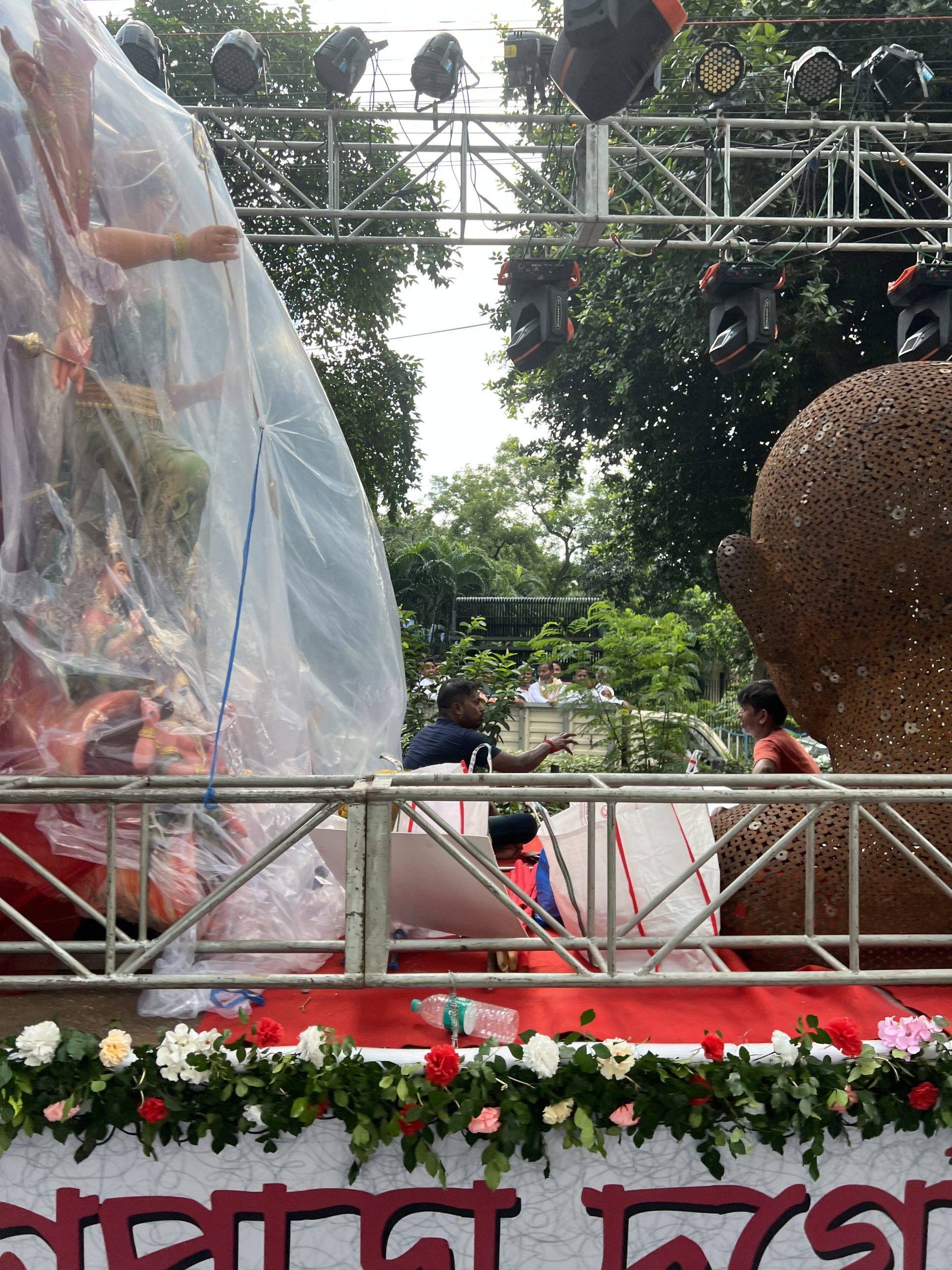 The inauspicious ride to the river for the idol that has been the focus of so much celebration and pageantry over the last five days. It will be tossed into the river just like that!