You are the divine river from heaven, you are the savior of all the three worlds, you are pure and restless, you adorn Lord Shiva’s head.

May my mind always rest at your lotus feet.

Muslims make a pilgrimage, or Hajj, to Mecca at least once in their lives if at all possible, and ideally, every year if they are able. In much the same manner, every Hindu yearns to visit Varanasi at least once during his or her life. Apparently, if one can only go once, it’s best to go late in life when one’s responsibilities are fulfilled and then all sins can be forgiven, the logic being that one doesn’t sin much later in life. Yeah, that’s us. (Wait! Is it a sin to eat Biscotti gelato in the morning? Asking for a friend…) Varanasi has been the religious center of Hinduism throughout time and some call it the Vatican of the Hindus. It is thought to be one of the, if not the, oldest city in the world. It’s India’s “Spiritual City.” Devout Hindus, especially the elderly, come here hoping to die because in doing so, they achieve instant nirvana which frees the soul from the normal cycle of birth and rebirth. Hemesh, our guide, says that it is not at all unusual to see a taxi with a shrouded corpse tied to the top of it making its way through the streets of Varanasi. It is believed that water of the Ganges liberates the soul by flowing over the ashes. The Ganges River is worshipped as the goddess Ganga in Hinduism because it is the holy river for Hindus, so naturally, religious ceremonies take place frequently on the Ganges. There is no shortage of songs and poems praising the Goddess Ganga. The Ganges flows through Varanasi and other Indian villages and cities. Ghats provide access to the river. Varanasi has approximately one hundred ghats. There are ghats in other places in the world (and there are also mountain ghats), but the ghats of Varanasi (and other riverside cities and villages) are the steps that lead down into the river. Most of the ghats are used for bathing and washing clothes and other activities of daily living, but there are two ghats in Varanasi that are reserved for cremations.

The Ganges is 1569 miles long and 400 million people live on or near its banks. All along the river, we see people bathing, washing their hair, clothes and children, collecting water, fishing, etc. Raw sewerage is still being dumped into the river and only about 45% of the sewage that flows from 181 towns is treated. It is estimated that 1.1 million liters of human excrement is discharged into the Ganges every minute. But the facts get worse and, be warned, you may want to skip along to the next paragraph at this point. We were told that 15,000 tons of human ashes are released into the river every year and 140-200 tons of incompletely cremated bodies are dumped into the river each year. All this has rendered it the fifth most polluted river on the planet. Honestly, I can’t believe it’s not numero uno!  Still, our guide Vik (that’s his work name), says that if we take a bottle of water from the Ganges home and leave it sitting for three months, when we test it at the end of that time, we will find that it is as pure as any water anywhere. He says there are bacteria-eating bacteria in the water and that it cleans itself. I think I’ll just have to take his word for that. All I know is that everyone on this Uniworld cruise is terrified of falling in and contracting some horrific disease. But I do think that change is coming, if slowly, to the way the people treat their most highly revered river. As the Indian environmentalist Vandana Shiva said, “If Ganga lives, India lives. If Ganga dies, India dies.”

We’ve seen festivals celebrating the gods or goddesses, since we’ve been here. There have been many services and celebrations on the shores of the river. The celebrations featured music and singing and lots of drumming. There are elaborate shrines to these gods and goddesses around the villages and lots of festivities and gift giving. People gathered on the ghats everywhere and celebrate. But even when they aren’t celebrating with an organized ceremony, they are often in the water. I can only assume that the heat and humidity drives people to take the plunge frequently. 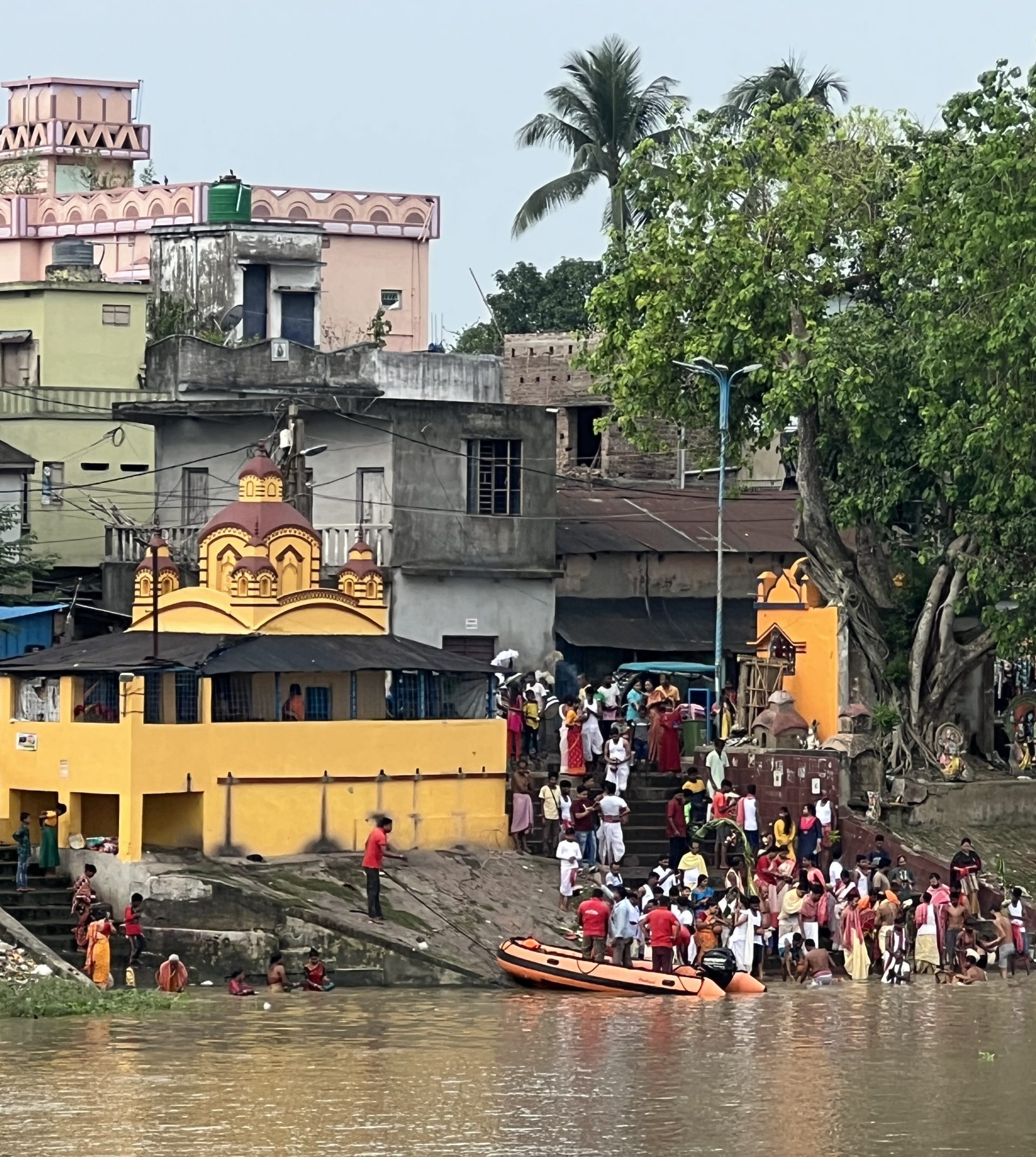 One of many celebrations this week. 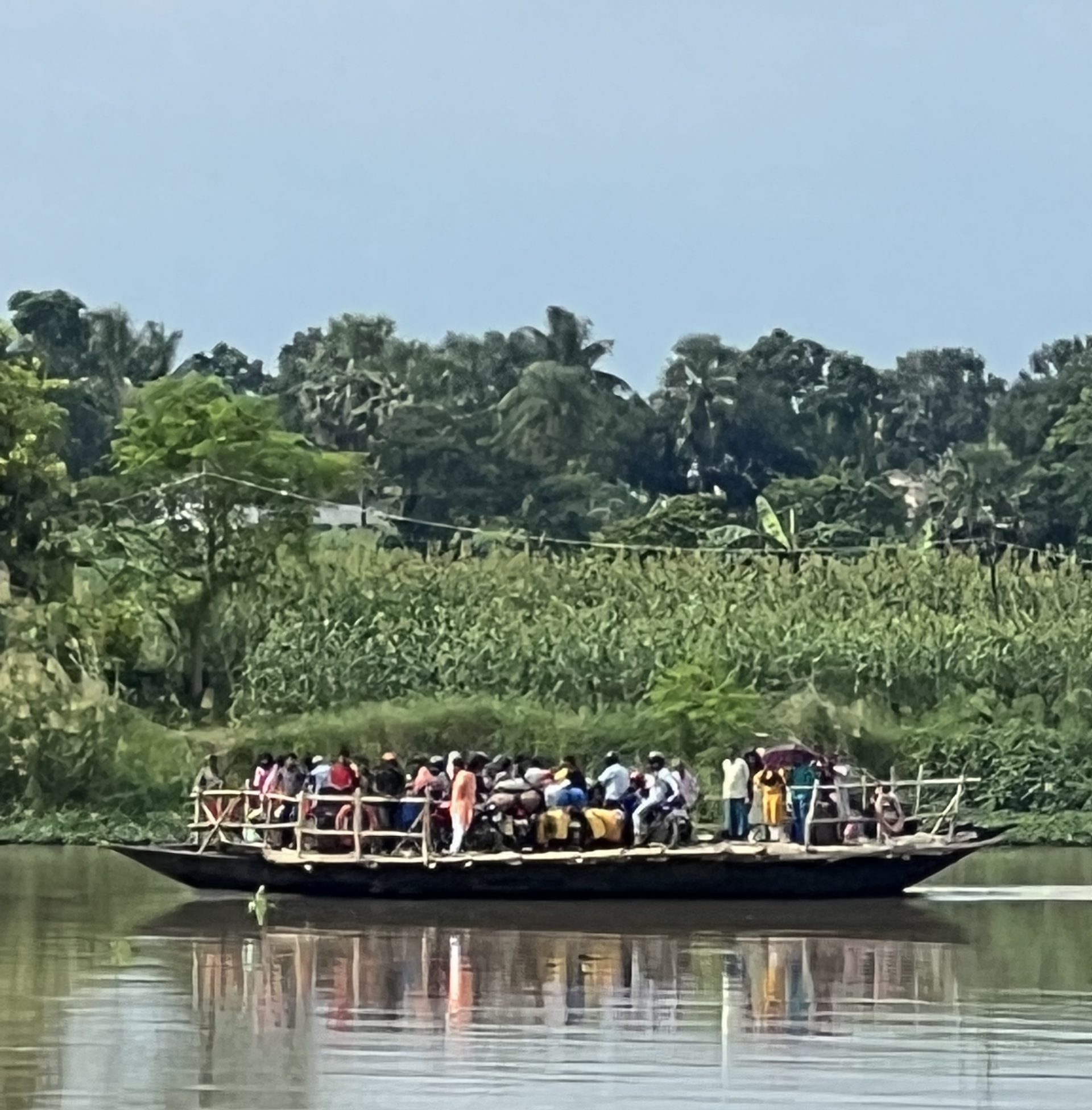 There are few bridges out in the countryside, so people have to ferry from one side of the river to the other. 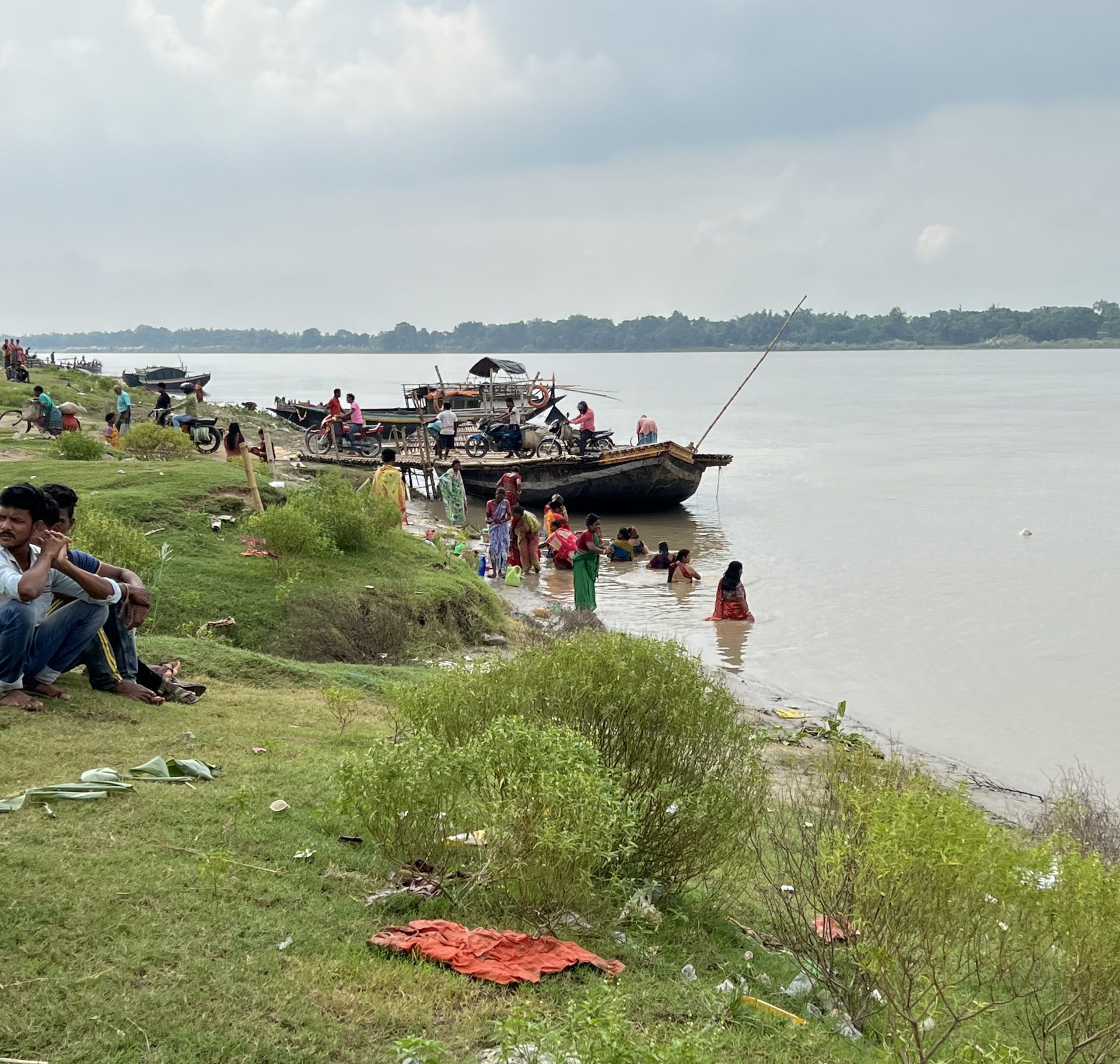 Everyday life on the Ganges.

The river cruise wrapped up on Friday, but we had signed on for the post-cruise extension to Varanasi. (Here is how you pronounce it: ver-AN-a-sea.) We caught a flight from Kolkata with eight fellow travelers from our group and Hemesh, our cruise director extraordinaire. We arrived in Varanasi late in the afternoon, checked in at our hotel, and left immediately for the riverbank. The traffic is beyond insane and we ended up walking much of the way because it was faster to walk. Walking is dangerous because of all the cow dung on the roads, not to mention the cows, dogs, bikes, cars, pushcarts, rickshaws, tuk-tuks, trucks, taxis, and throngs of people going every which way. We finally arrived at the shore and walked the plank to our boat. We boarded the run-down boat and, after much effort and yelling and drifting into other boats, the crew finally got it started and we cruised along the ghats of Varanasi. (Pro tip to crew: get the boat running before you shove off.) 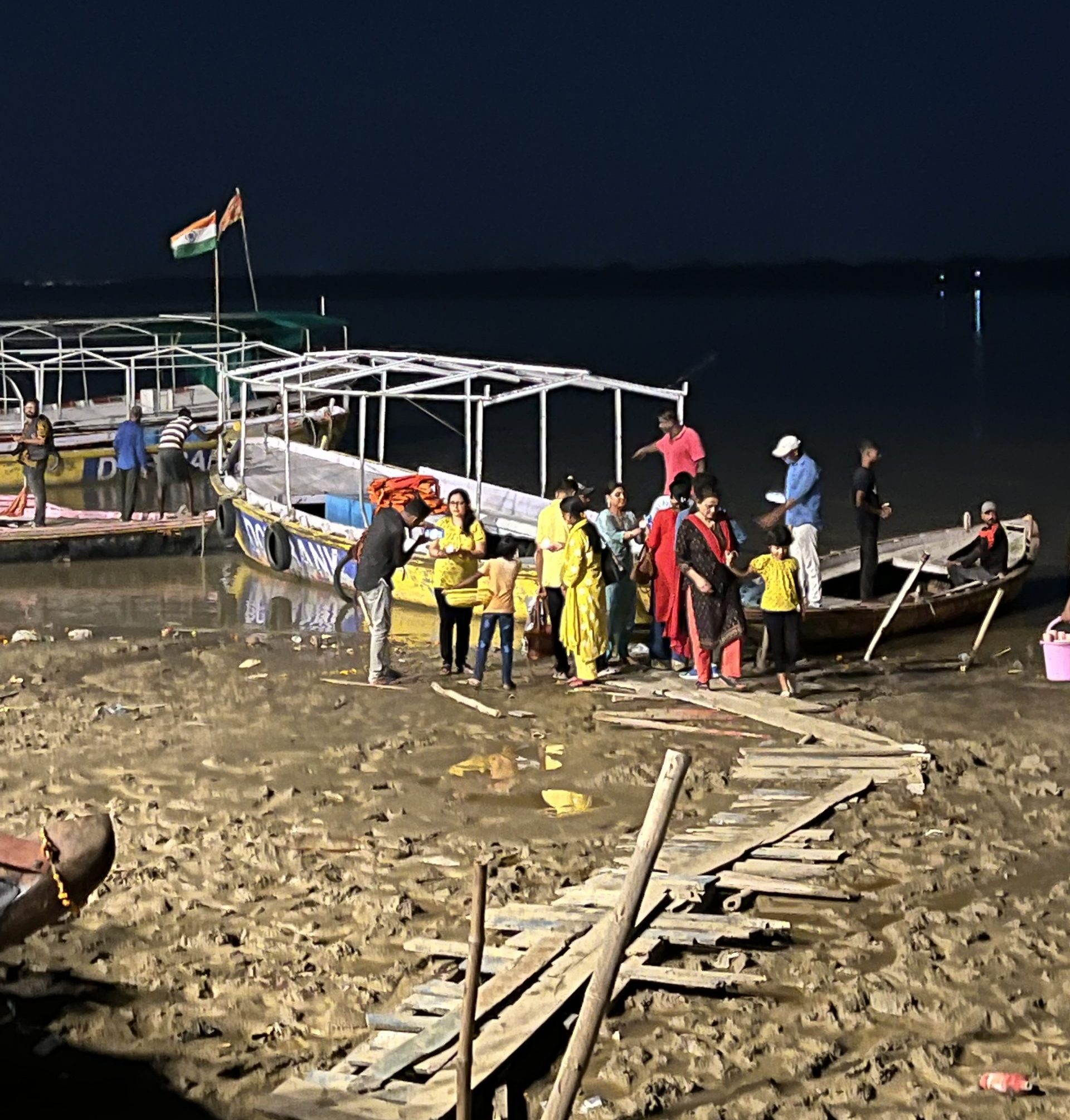 The walk to our boat.

We came to see a ceremony called the Ganga Aarti. It is held every evening at sunset to give thanks to the god of fire for the divine light of the sun. There is a lot of chanting and the priests light big oil lamps and use incense in a well choreographed ceremony. There were actually two ceremonies taking place on two ghats at the same time. Estimates varied wildly, but some say there were as many as 25,000 people there Friday evening. We were glad there wasn’t a big crowd. 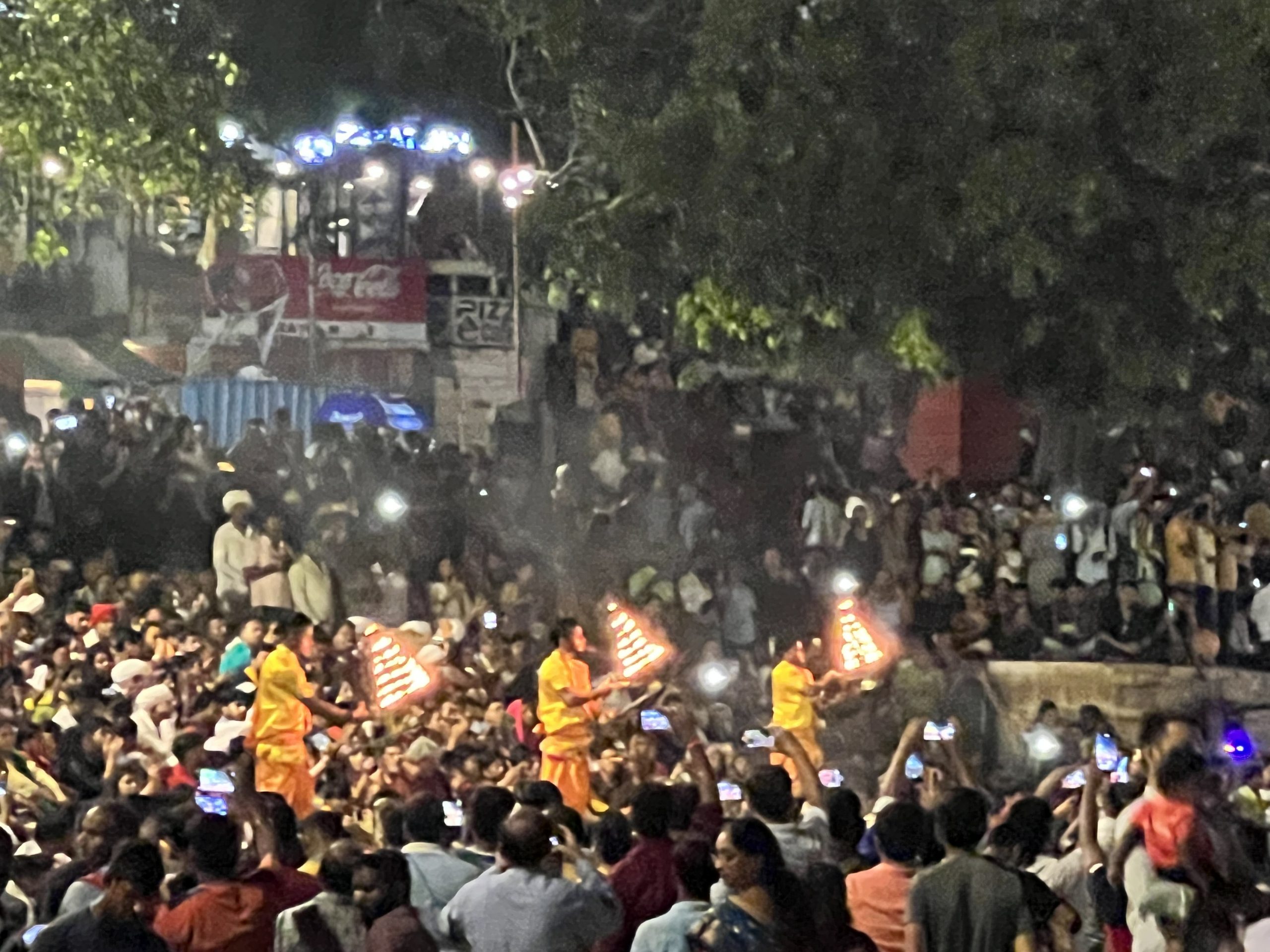 We continued our boat ride and soon we were at the cremation ghat. There are cremations 24/7 and the amount of wood they burn daily is astounding. There were several fires Friday evening. Our local guide explained the cremation rituals and ceremony as well as the Hindu traditions regarding mourning. It was a fascinating experience; Rick described seeing the cremations as “otherworldly.” Death in Varanasi isn’t a taboo subject, and again, dying in Varanasi is the ultimate dream of Hindus as they have their sins forgiven and their soul is at absolute rest. 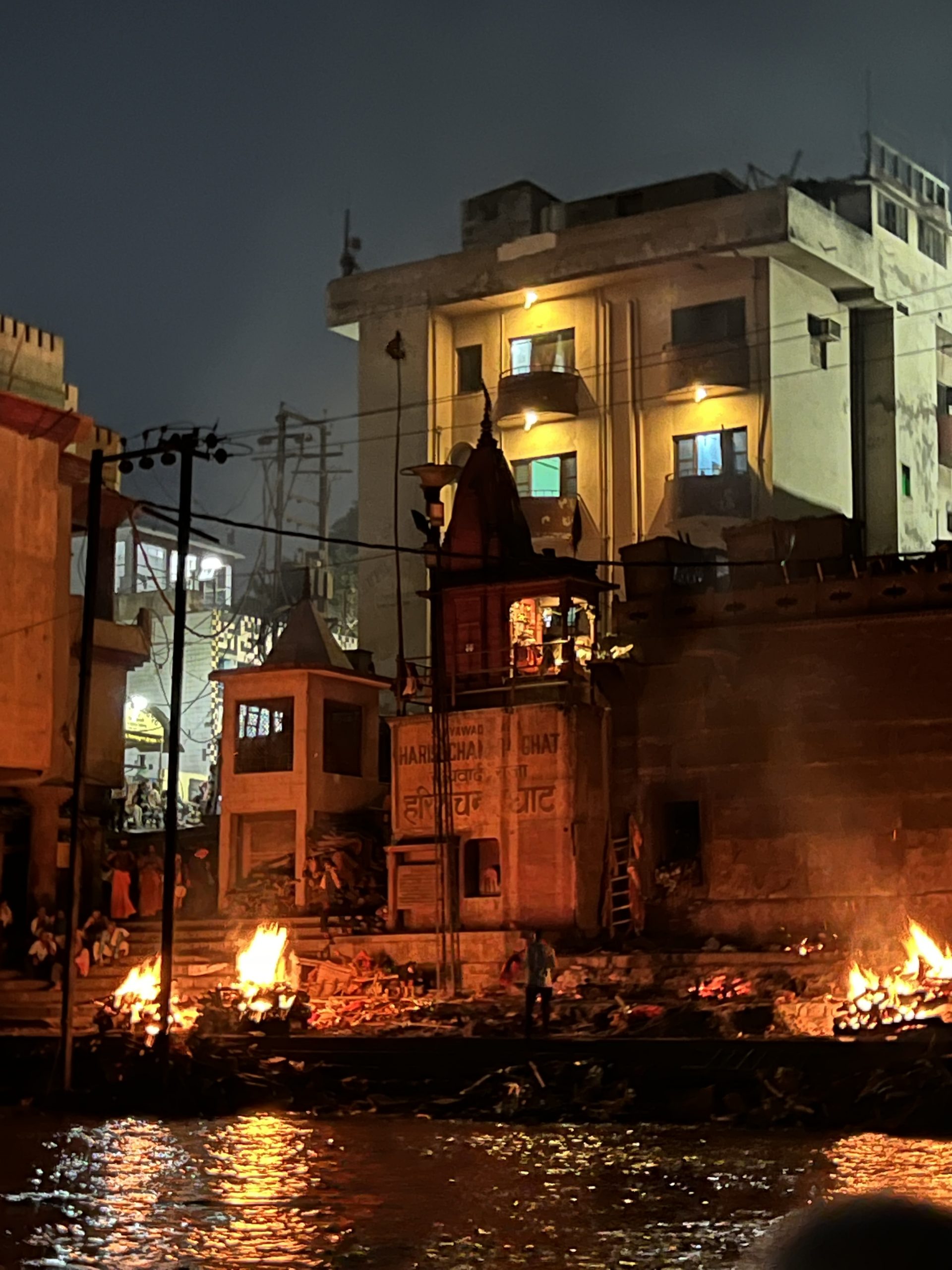 Saturday morning, we were back on the river to see the sunrise. The faithful were on the ghats and in the water performing their morning rituals. There were food stalls all along the streets leading to the ghats so that the faithful could break their fast after performing their morning ablutions in the river. A young girl selling floating candles came with us in the boat and everyone was given a candle to drop into the river. We were coached on a little  “Om” chanting and some members thought that was “deep.” The Lawsons? Not so much. To each his own, as they say. But truthfully, overall, other than seeing the cremation ghats, we enjoyed the morning boat ride more than the evening boat ride. 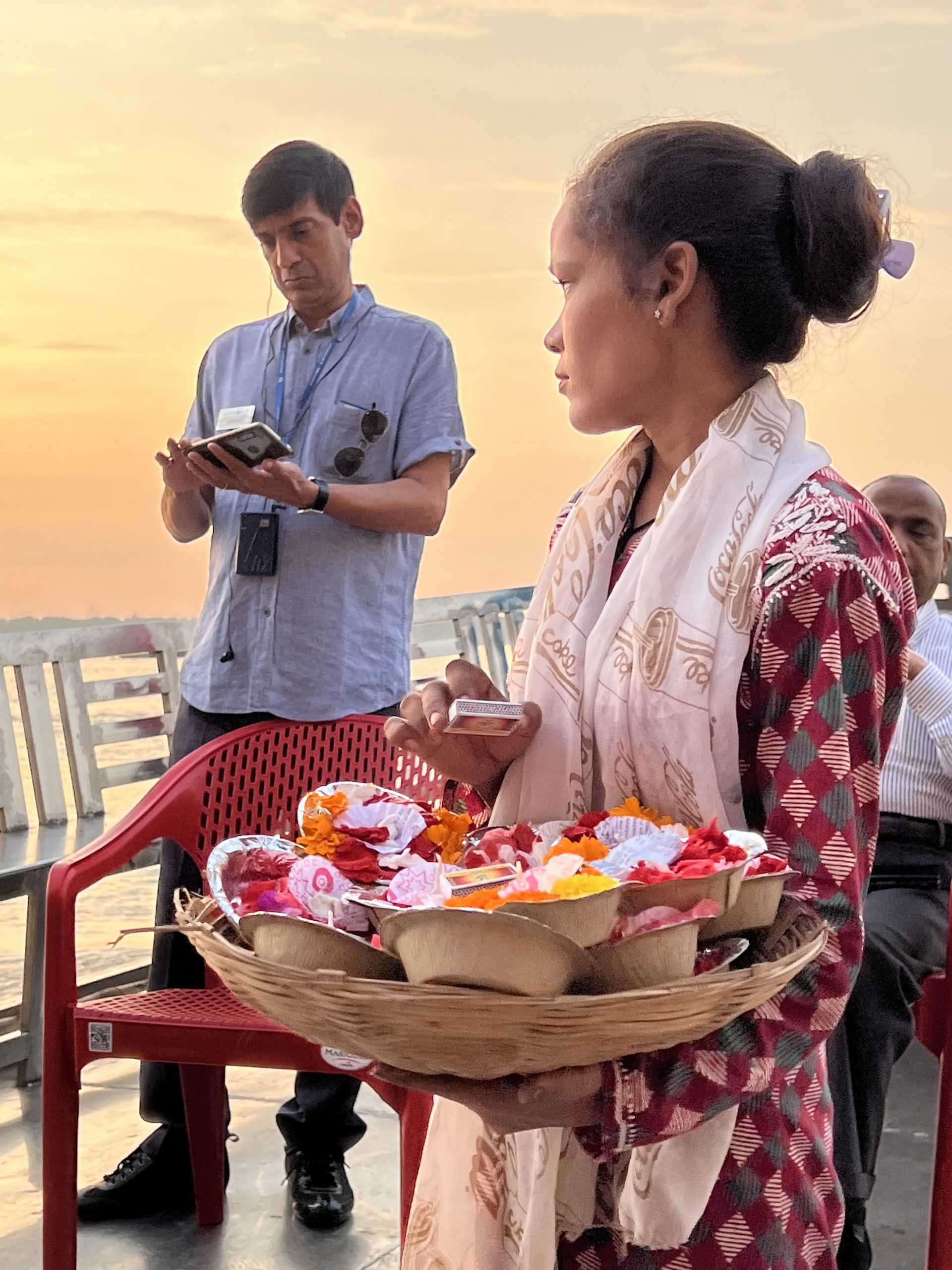 The girl with the candles for us to float. The man in the background is Hemesh, our incredible guide for this cruise. 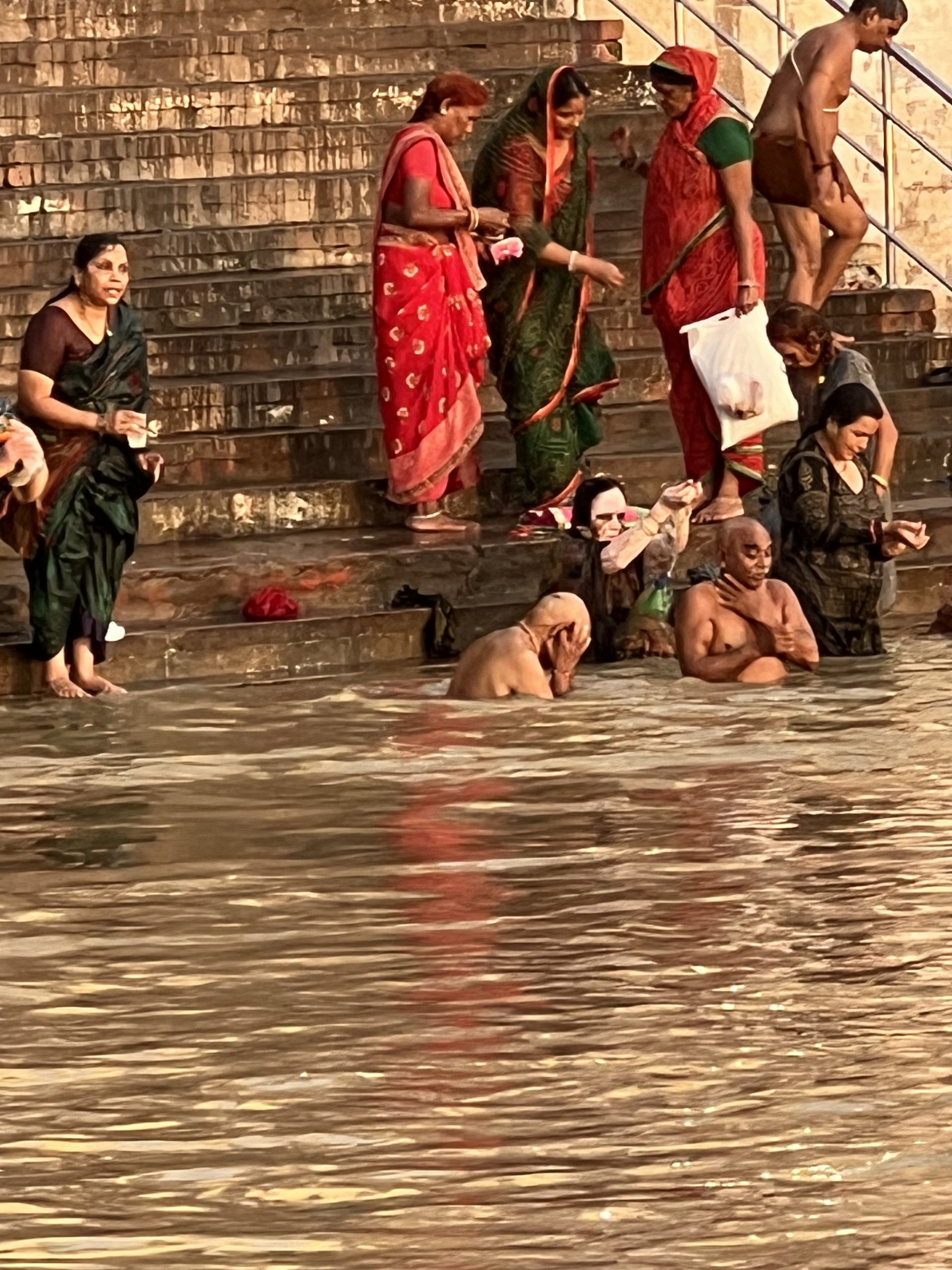 The morning rituals of the faithful. 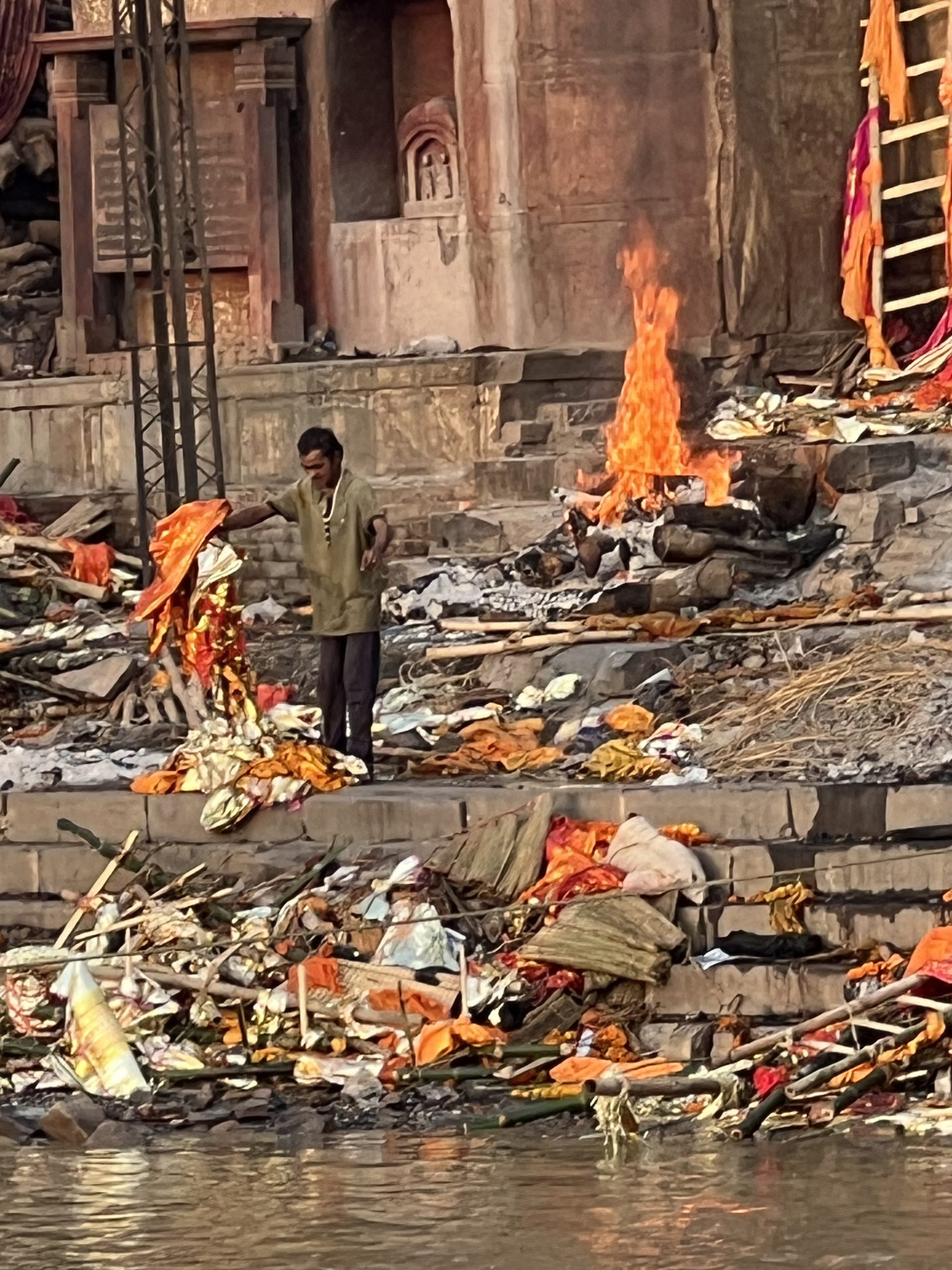 Twenty four hours (give or take a few hours) we were back at the Varanasi airport boarding a flight to Delhi. Some say that Varanasi was the highlight. I’d say it was a highlight, but it will take a while to distill this adventure and arrive at what we take away as our most memorable impression. There is just so much to synthesize from this incredible country.