The Canarians are crazy for their Pinus canariensis and the love is well deserved. I am quite sure I have never written a post about a tree but, as they say, there is a first time for everything. This is an amazing conifer with powers that are nothing short of miraculous. If you give a Canarian five minutes of your time, you will walk away with the whole spiel spelled out in great detail. When we awoke Tuesday morning, we were docked in the Canary Islands on the island of Santa Cruz de la Palma. We noticed two things immediately upon pulling the curtain open on our balcony door. First we saw the black sand beach, so we knew volcanoes were close at hand. Then we noticed the rugged terrain covered in green. Often, when a volcano is near, the landscape appears arid and barren and looks like you think the surface of the moon must look, so the tree covered mountain peaks were interesting. Rick immediately said, “Wow! Look how green it is here.” And the Canarians love their green islands.

But the residents of these islands have not always held these denizens of the forest in such high esteem. For many years, the forests were clear cut and the wood used for ship building and other construction. This reduced the native range of the endemic pine on the islands. Even now, it is rare to find a really large, old Canary pine. These trees are the tallest species in the Canaries.

It might be a good time to stop and run through a little refresher course on the Canary Islands. FYI, the island chain was not named for flocks of little yellow birds. Early settlers brought dogs and the Latin word for dogs is “canii,” so the islands became known for dogs; the Grand Canary island was given that name because (I’m sure you guessed it) the dogs there were big. The little archipelago is an autonomous region of Spain, so the native language is Spanish. There are eight main islands and even more small, uninhabited islands. They were formed eons ago by volcanoes. In fact, there are still volcanoes that are considered active in the Canaries. The volcano on Santa Cruz de la Palma just stopped erupting last December and it continues to blow off steam. Below is a picture I took this week on that island. 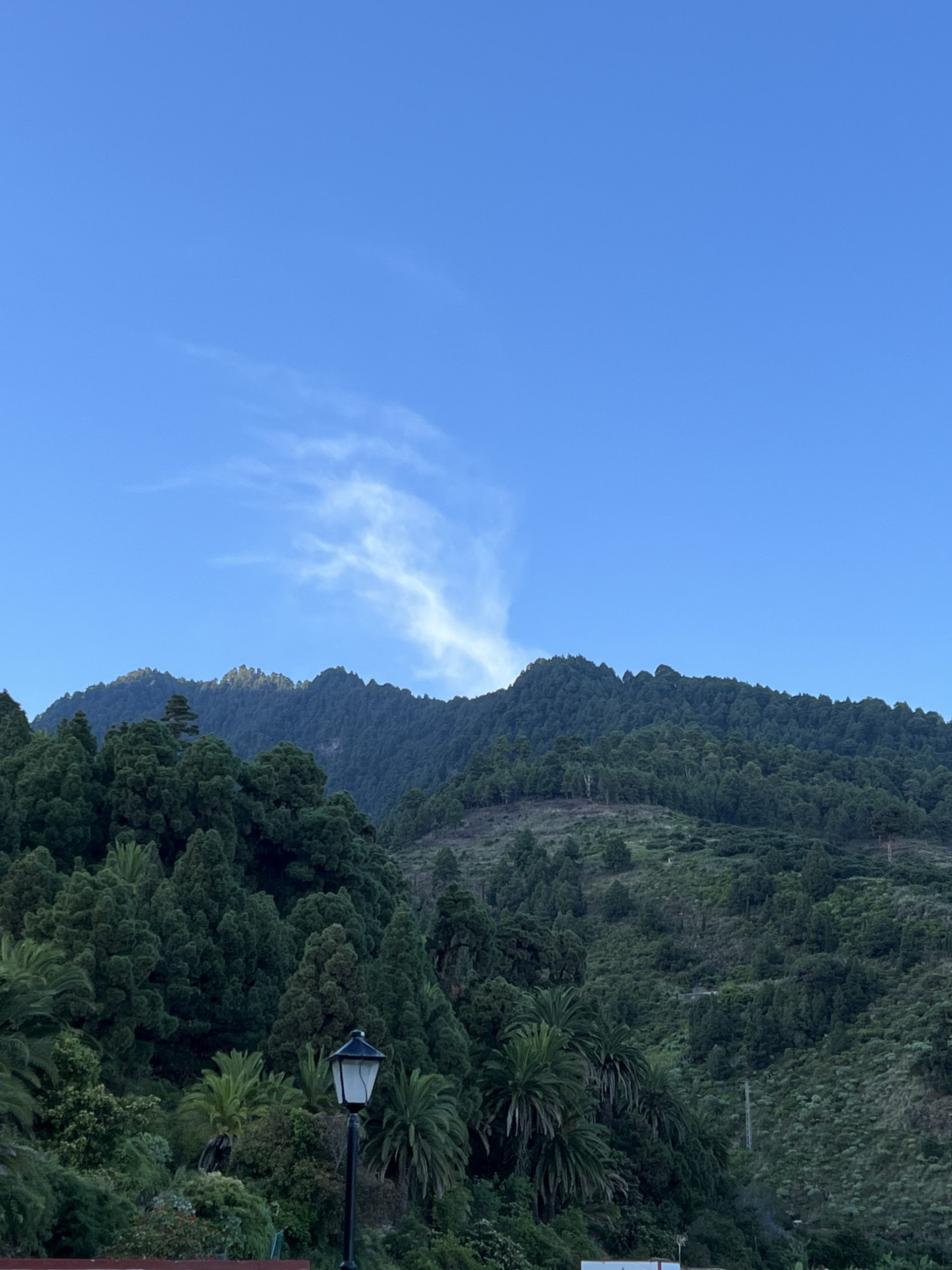 The steam rising from the volcano on Santa Cruz de la Palma. Look at the thick pine forest on the mountains in front of the caldera.

The volcano on Tenerife is expected to blow again, but is sleeping presently. Mount Teide is the third largest volcano in the world and is the highest point in Spain, reaching an elevation of 12,188 feet. That volcano crater spans eleven miles at some points. The national park includes that volcano and we took a tour in a Jeep 4×4 almost to the top. The weather was warm and sunny when we left Santa Cruz de Tenerife on the coast. By the time we reached the summit, we clambered down from the back of the open-top Jeep and limped into the hotel gift shop, shivering, and quickly purchased two puffer jackets. It was money well spent. There is a cable car that can accommodate thirty two people running closer to the top that makes the trip in eight minutes. Our guide, a Scottish expat married to a native Canarian, said that luckily the cable car was built by the Swiss. There have never been any accidents since it was built in 1971. There is also an observatory high upon the mountain. It’s pictured below. 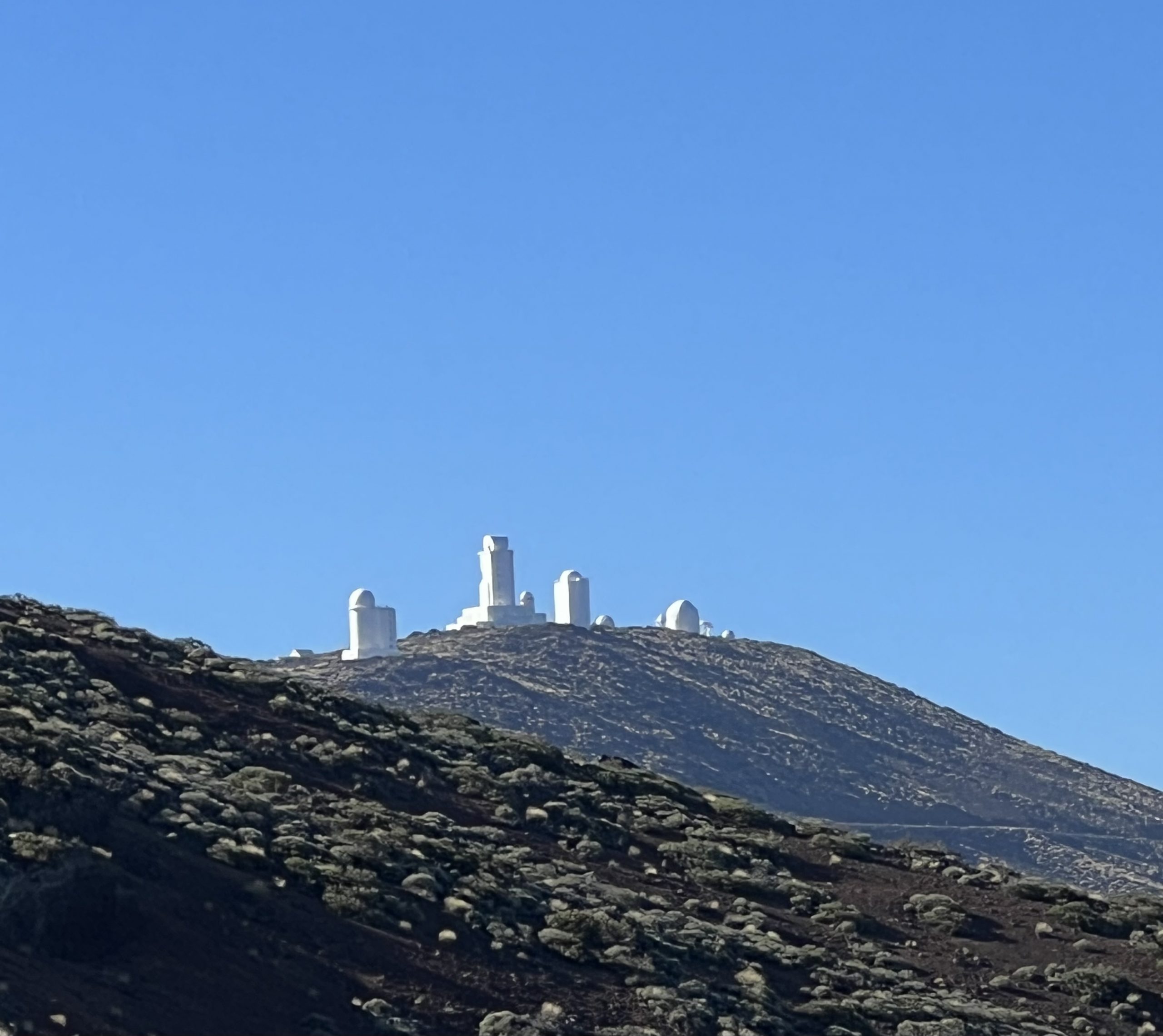 Now, as I promised, the story of the Canary pine. The Canary Islands don’t really get a lot of rain. In the northern part of Tenerife, rain falls around twenty two days per year, while in the southern part of Tenerife, they may have only ten to twelve rainy days per year. You would think that there would be wide swaths of the islands that are very dry, but thanks to the Canary pines, this is not the case. As the prevailing winds from the Sahara sweep over the islands and meet the cooler temperatures at higher elevations around places like Mount Teide, sea clouds form and are unable to rise and float on by, so they give up their moisture over the pines. The needles of the pines are ridged on one side and smooth on the other, allowing them to capture the moisture. They turn down to release the water on to the forest floor. The pines absorb about seven percent of the moisture to meet their own needs and the remaining water continues its journey to the underground aquifers. Each tree can take in around six to seven liters every day. From those vast underground water stores, the Canarians “mine” the water and distribute it to drier locales to meet the needs of the island. Clever, eh? On top of that, the tree has developed a tough evolutionary characteristic that makes it quite impervious to heat, so they can withstand fires and even a bit of lava flow. Sometimes after being exposed to high temperatures, they will look dead for a year or so, but then sprout new growth. Additionally, the needles are used to cushion bananas for shipping. This is a big deal because bananas are the chief export of the Canaries. The Canary pine is a can-do kind of tree. It helps out around the islands in myriad ways.

We really enjoyed our time on the islands. The weather is beautiful, the food is good, and the people are warm and welcoming. It would be a great vacation destination. The islands would make a tree hugger out of anyone. 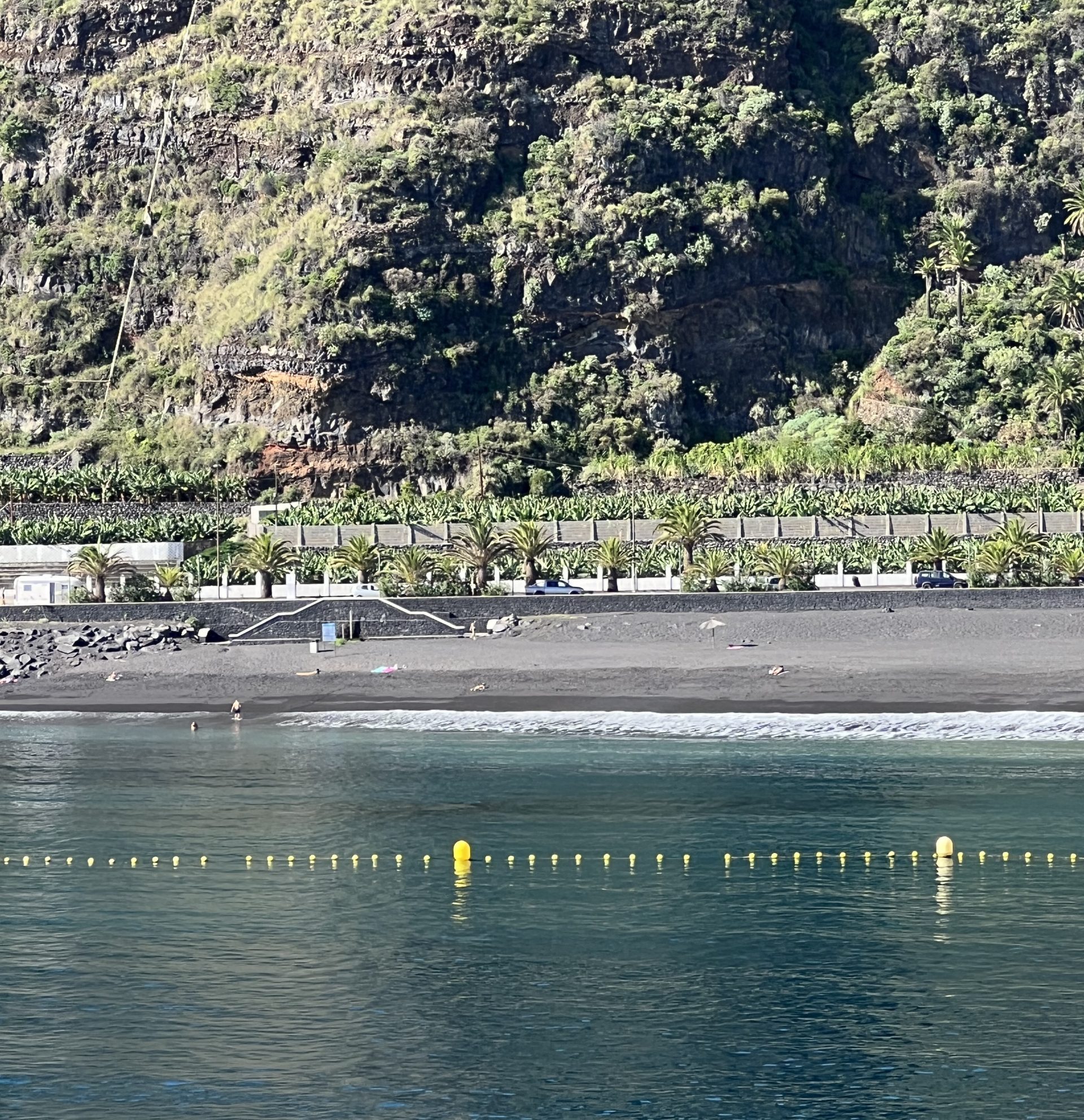 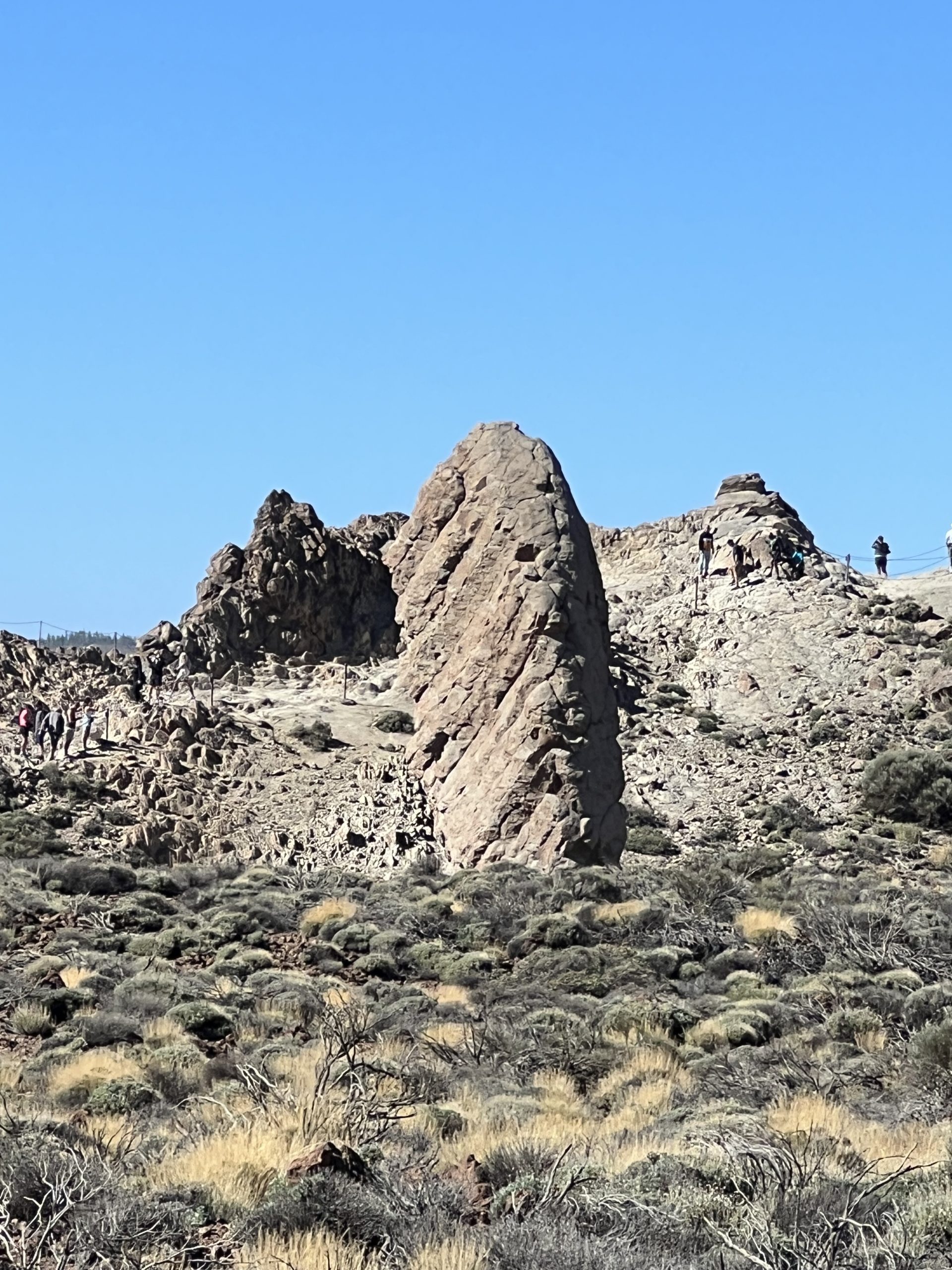 Volcanoes leave things in such a mess! 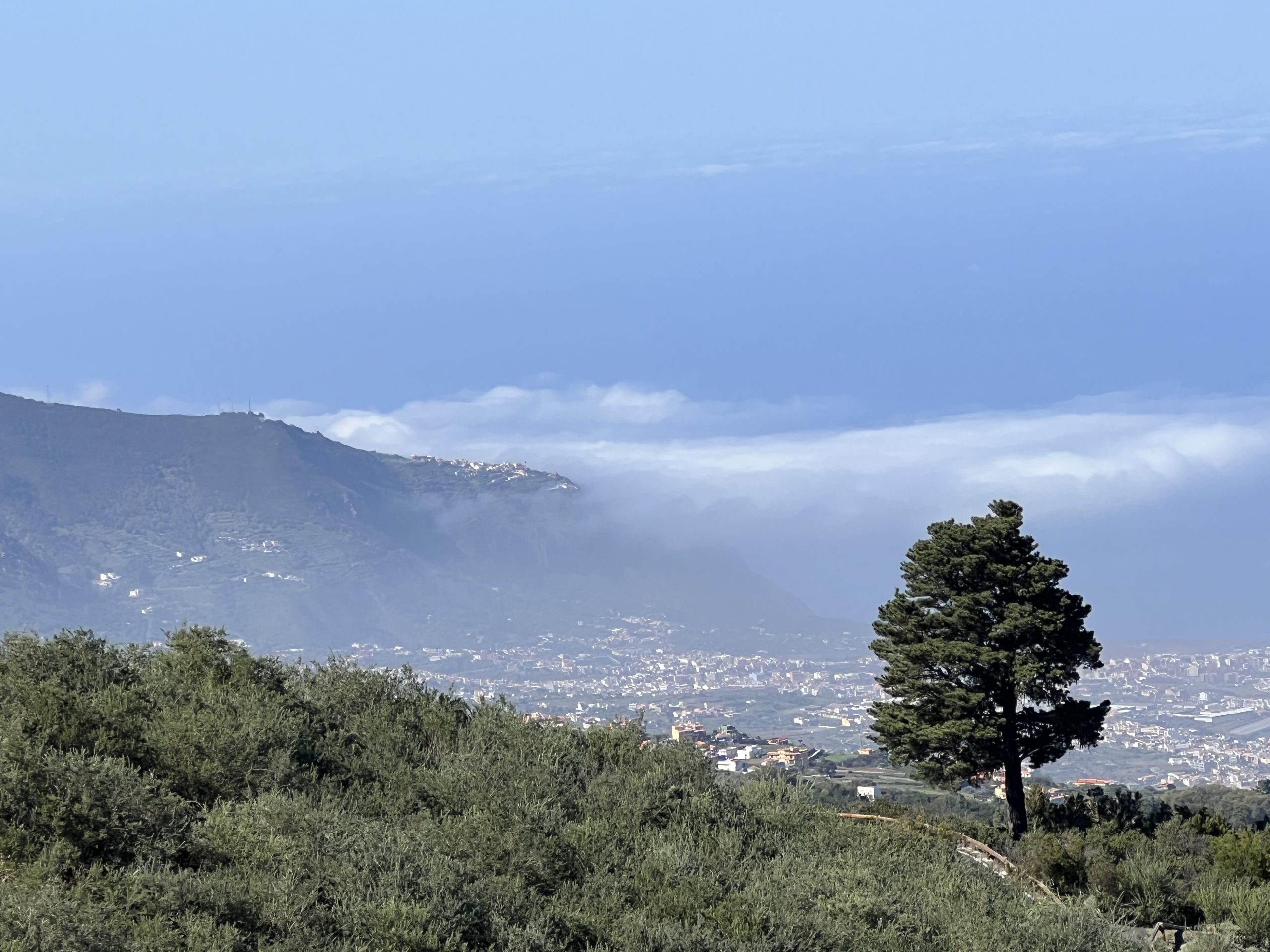 A Canary pine stands sentinel over the valley below. 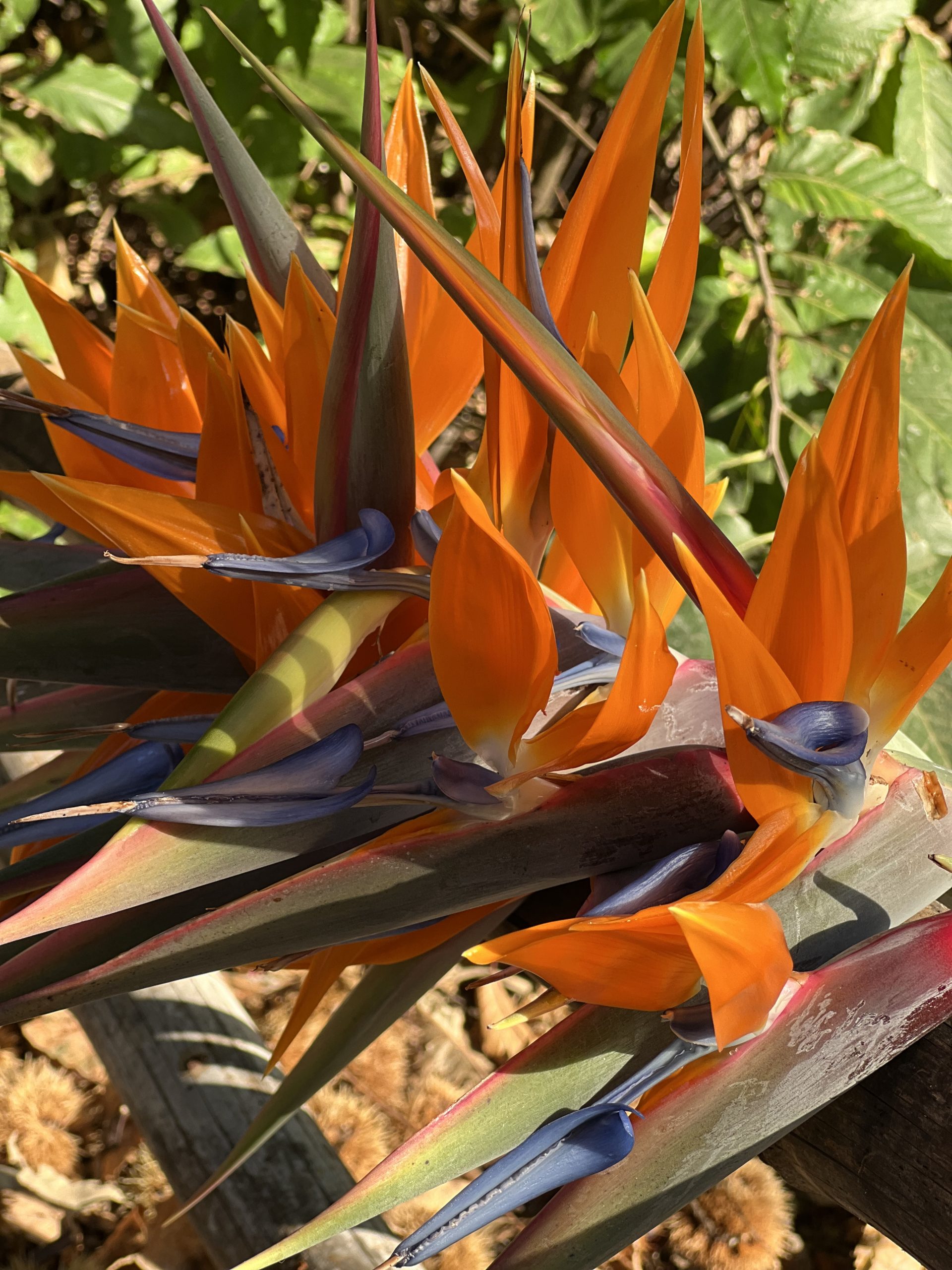