The Island Nation of Cape Verde 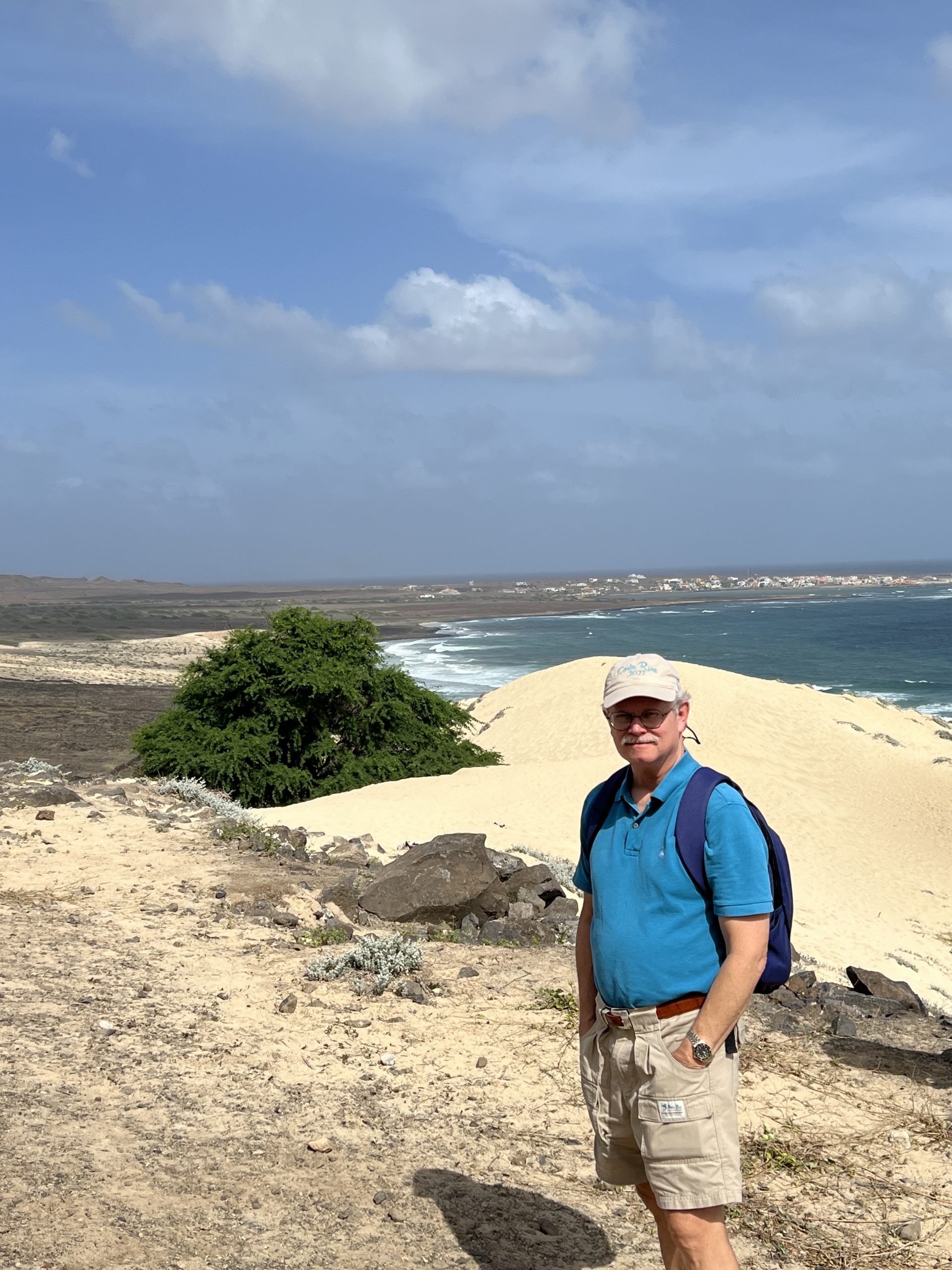 Beautiful beaches and clear sparkling water. Some of the beaches have yellow sand instead of the volcanic black sand. That’s because of all the sand blowing in on the winds from the Sahara.

Quick show of hands: who has ever heard of Cape Verde?

I don’t see any hands, so I will move ahead with enlightening one and all.

In the grand scheme of nations, Cape Verde is a new kid in town, only having gone out on its own in the seventies. Before then, Portugal was the big daddy. Now Cape Verde, AKA Cabo Verde, is a nation of ten islands about three hundred miles from the coast of Senegal. Nine of the islands are inhabited and the population is around 500,000 in total. The government is a democracy and capitalism is vibrant. The currency is the escudo and one hundred of them equal one US dollar. The population looked young to me. They speak Creole and Portuguese. Tourism keeps 57% of the population employed. They eat mostly rice, vegetables, and seafood with an occasional goat on the spit. Beef and pork seemed in short supply. I guess you need abundant water to support cattle. The housing on the islands ranges from some fairly rudimentary shacks to rather nice looking homes. Our guide, Claudio, says that even the nice homes lack indoor plumbing. Some man asked if they had air conditioning. (Sorry, but yes, there is such a thing as a stupid question.) Because it’s so much drier here, Cabo Verde does not have the lush beauty of the Canary Islands. Too bad they don’t have any Canary pines. The contrast between the two island chains is stark. 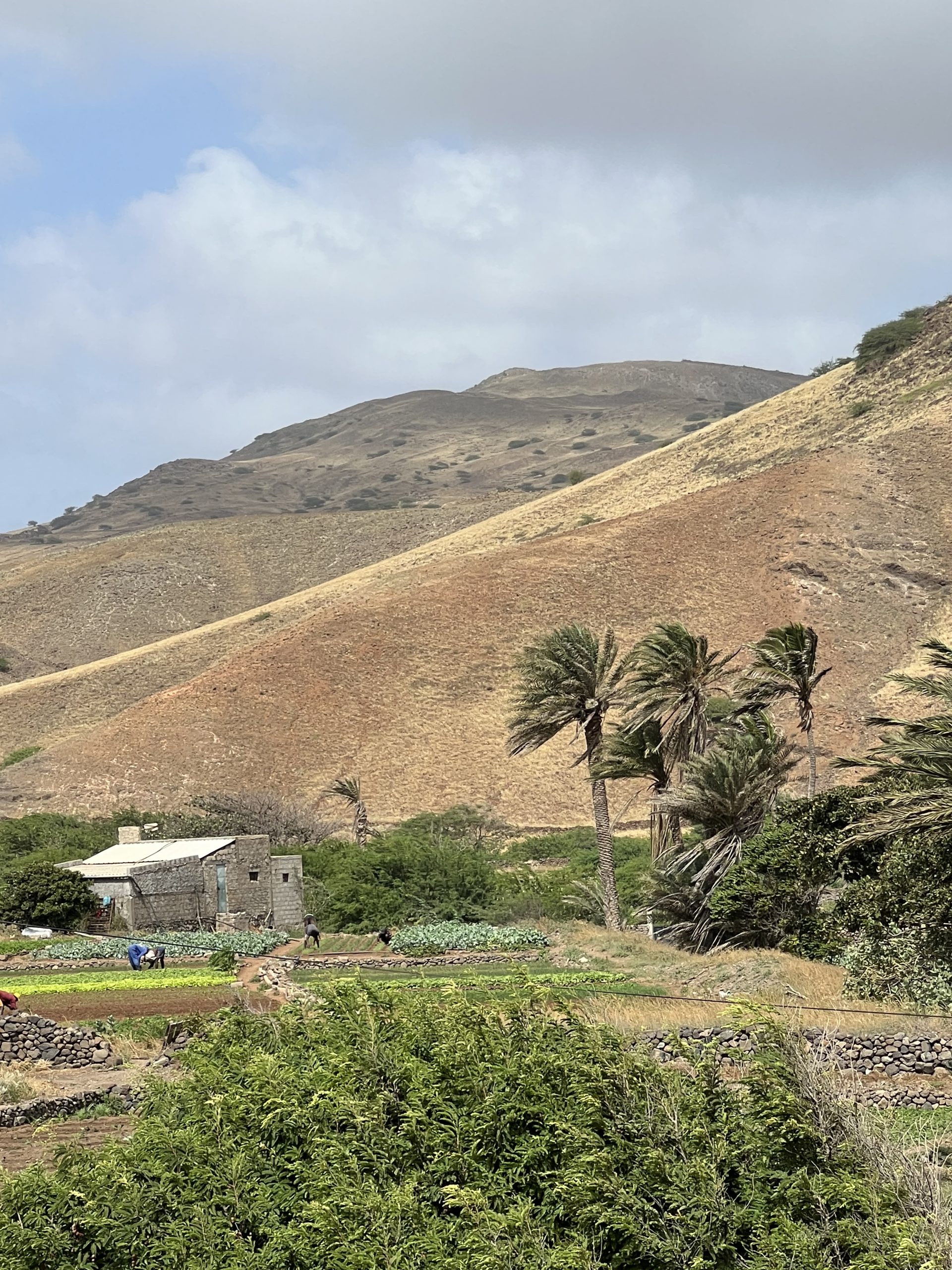 No Canary pines on the mountainsides, but at least there is water in the valleys for growing vegetables and fruit. 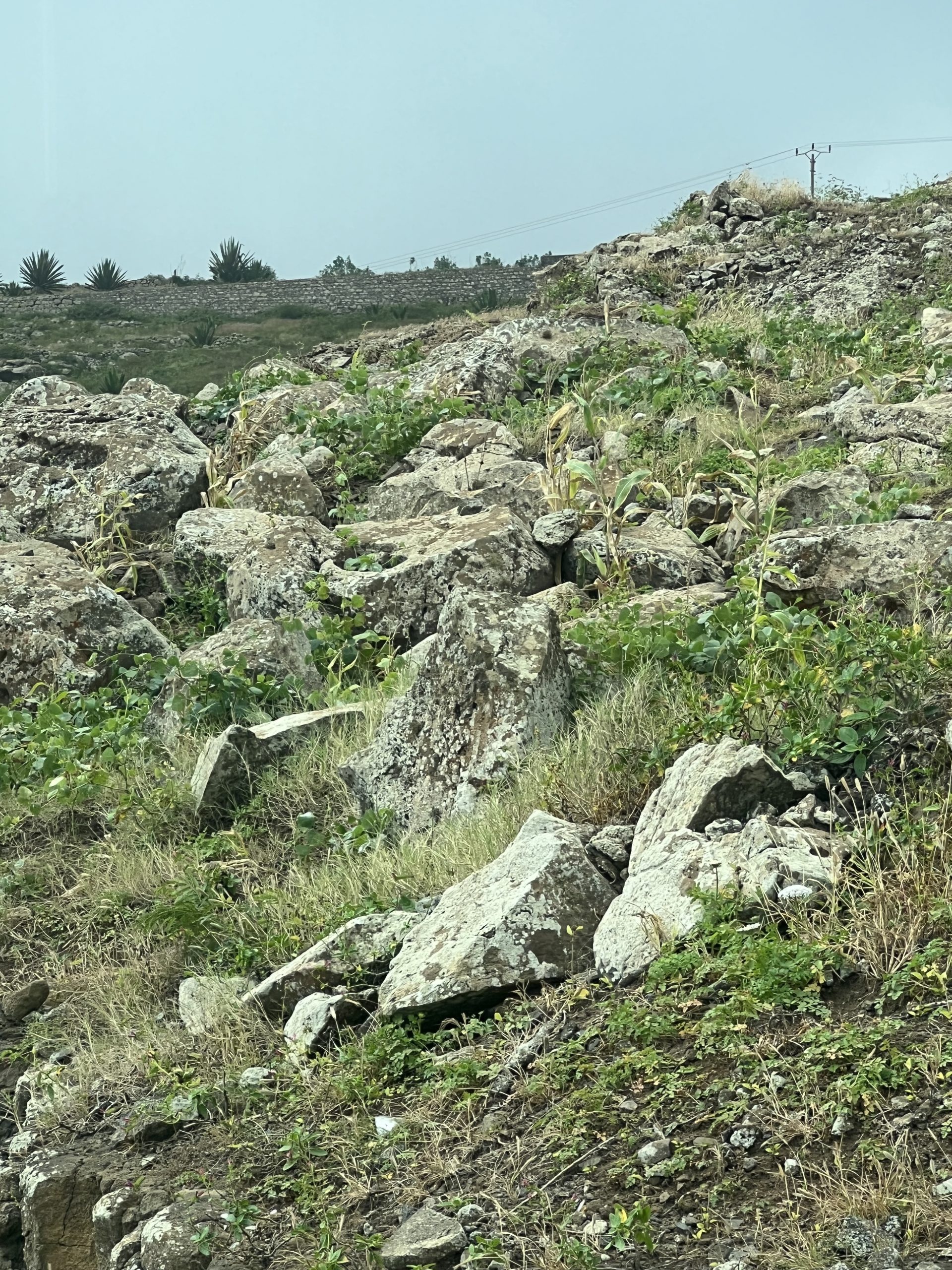 We have moved from the island of São Vicente, after having driven up and down and all over the place, to the island of Santiago. I don’t mean to be unkind, but I’ll be honest: there is just so much to see here and it doesn’t take too long. The people are nice here, but don’t book a month here, if you catch my drift. We were not originally scheduled to call at the port of Santiago, but Senegal jilted us at the last minute for some heavy cargo ships, so the ship had to scramble and come up with something to do with us in Cape Verde for an extra day. The people in Cabo Verde were ecstatic to see all five hundred of us and our open wallets.

It seems that of these small third world nations (I’m probably not supposed to call them “banana republics”) like to wield super powers and flex some muscles at the big cruise ship. You know, “own the man!” I think the cruise lines say,”Well, OK, have a nice life!” and strike them from the list of to-visit countries, but it’s a cheap, short-lived thrill for some wannabe potentate. (Yes, Senegal, I’m talking about you.) But wait until you hear what Togo tried to do.

Some Einstein in Togo decided that it would be cool for everyone to have a QR code on their Covid vaccination certificate. Probably trying to justify buying that really neat ray gun that “reads” the QR codes. Or at least, the gun makes an official noise. So the decree came down from “on high.” Someone at the cruise line chuckled and said, “Fat chance that Togo can make all the other nations in the world go back and re-issue Covid certificates with those fancy QR codes on them at this late date.” Togo didn’t flinch or back down, so the cruise line said, “Alrighty then, we won’t by stopping in. Have a nice day. Oh, and BTW, we won’t be back. Ever.” Togo was forced to eat a little crow and “re-examine” the policy. They found a way to make it happen, so we are going to pop in for a day without the QR code.

On top of that, we are heading into pirate waters, AKA a High Risk Area (HRA). We did that in the Middle East and the cool part was that, on that cruise, we were guarded by a team of five ex-MI5 sharp shooters. We are also awfully excited about this because that means only essential lights will be on. It should be pretty dark up on the top deck and maybe we can see the Milky Way. Every cloud has a silver lining! 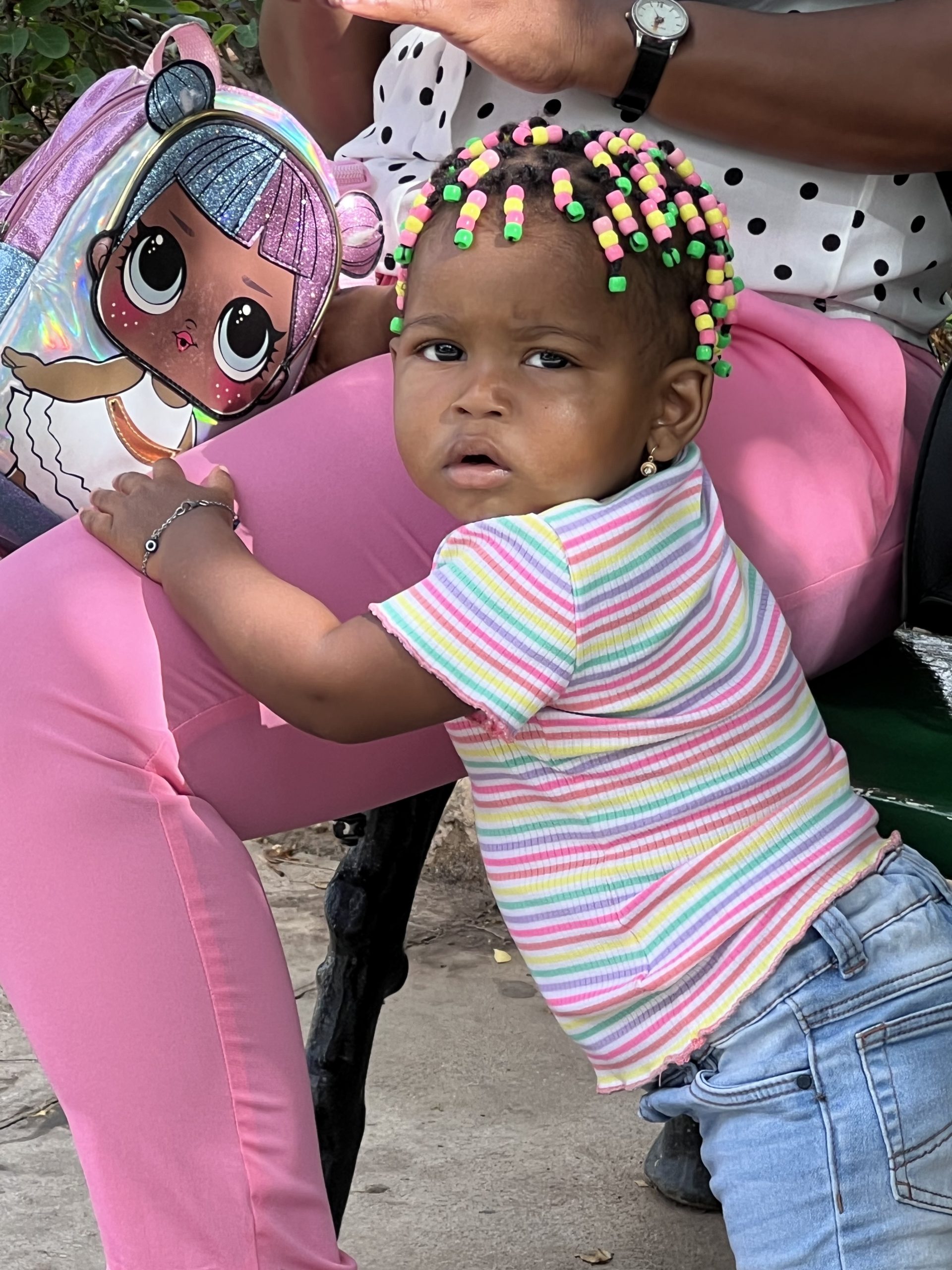 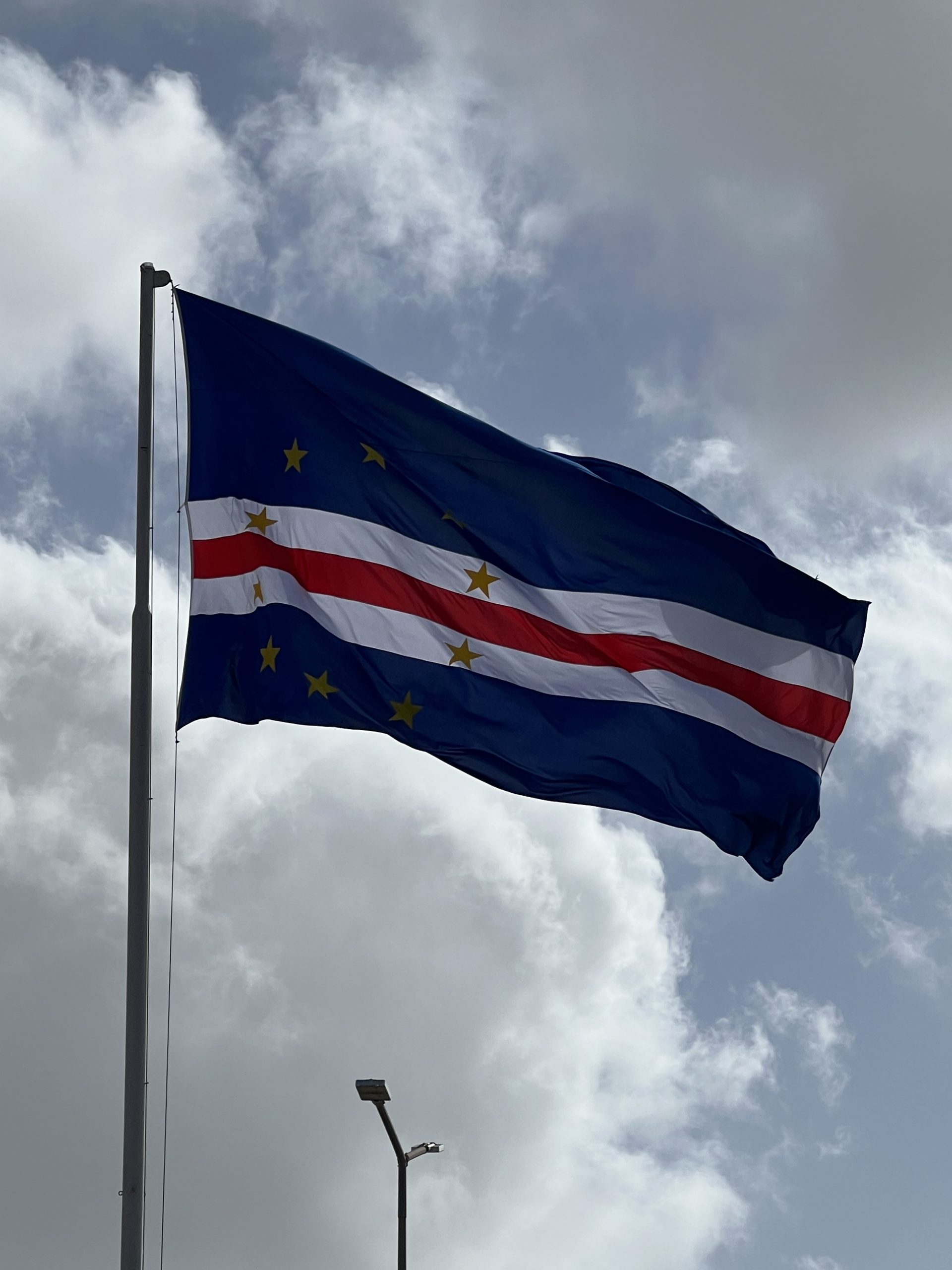 The flag of Cape Verde.