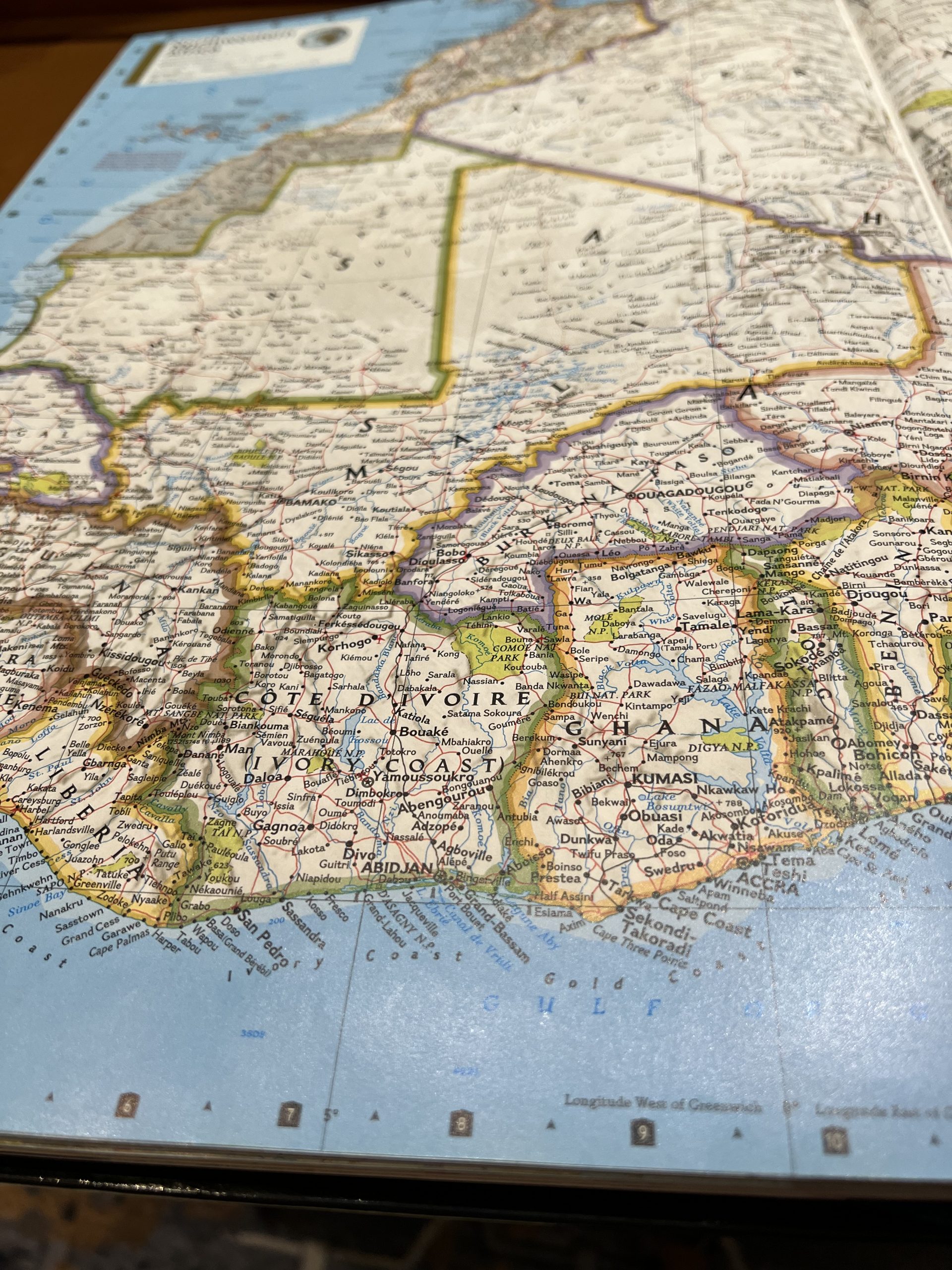 It has been estimated that a billion people eat chocolate each day, so a post about chocolate should be the sweetest story ever told, but this week we heard a lecture that made it all so very bittersweet. The journey from cacao bean to chocolate bar leaves a wide swath of destruction in its wake. Sorry to break the news, but the “food of the Gods” has a devilish route to your local candy aisle. Change is coming, but it’s slow.

The tree that produces cacao beans grows at roughly twenty degrees latitude above and below the equator. The tree grows in climates with high temperatures and high humidity and plenty of rainfall. About sixty percent of the world’s yearly totals of cacao beans comes from the Ivory Coast (Côte d’Ivoire) and Ghana. Africa brings in a total of seventy percent of the yearly production of cacao beans. Forty percent of that total comes from the Ivory Coast and twenty percent comes from Ghana. The cacao industry in Ghana supports around 800,000 people. The number is even higher in Ivory Coast. In the Ivory Coast, cacao accounts for over forty percent of its export income. It’s big business. At the end of the presentation, the speaker showed a film clip of a journalist asking farmers if they knew what became of the cocoa beans after they were sold. They had no idea. They were shocked to taste a chocolate bar and surprised to find out how good it tasted. 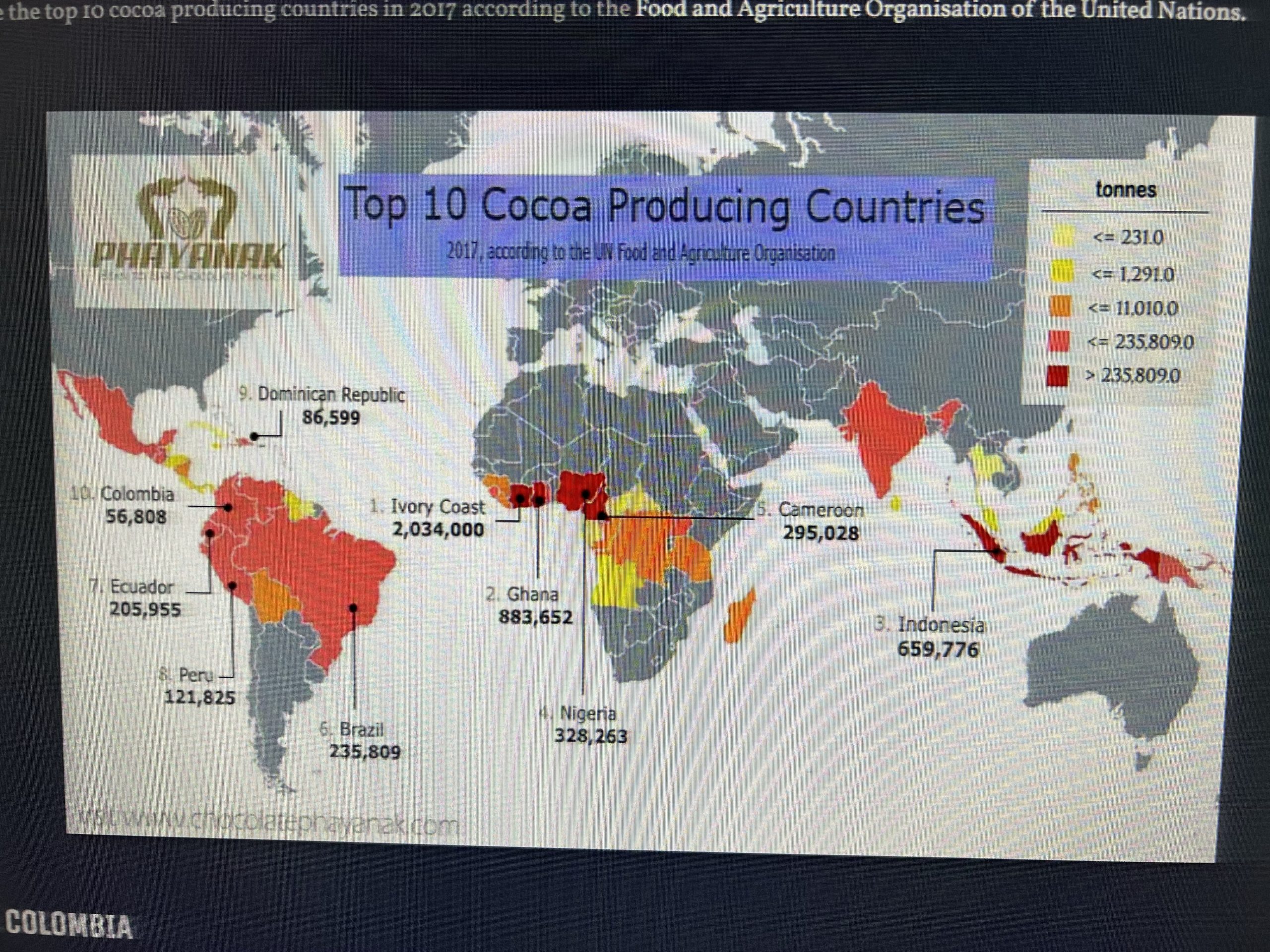 Trouble is, the trees do best growing on small farms. On large farms, pests and diseases are harder to control. That’s part of the problem. There have been huge shifts in populations due to drought and civil wars, so many migrants from countries such as Mali and Burkina Faso have flooded the cacao producing countries. Seeing that there is money to be made in the cacao industry has led to widespread deforestation, even as efforts to stop it have been initiated. It’s sad to see the deforestation that has occurred just since 2015, but looking at deforestation as a big environmental problem is a first world problem; the third world poor peasant farmers are only concerned with feeding their families and trying to access quality health care. With deforestation has come the loss of habitat for primates and other wild animals. The numbers of chimpanzees and elephants have shrunk at alarming levels. It’s very difficult for these countries to monitor the destruction of the forests and national parks as migrants just want a little land to farm, even if it takes four to five years to begin seeing the cacao pods that will earn them a small income. Meanwhile, they grow crops as a source of subsistence such as eggplant, tomatoes, maize, and papaya until the cacao trees begin producing pods. Ghana lost one quarter of its forest cover from 1990 until 2005. The Ivory Coast signed an agreement with Ghana to prevent any further deforestation. Pacts are nice, but who will be monitoring the progress or lack thereof? Glenn Horowitz is CEO of Mighty Earth, an American NGO. He says, “While government has a huge responsibility, let’s get real about who has the resources to act: Nestle’s annual revenue was CHF85 [Swiss francs] billion and Mars’ was CHF37 billion. In contrast, Ghana’s annual government budge is CHF11 billion and Ivory Coast’s is CHF9 billion.” Surprising advances are being made in making a chocolate-like food in the lab, so the chocolate companies probably need to up their PR game. People may find lab created “chocolate” more palatable than chocolate made by taking advantage of poor uneducated farmers in Africa. Not a good look.

But the story gets even more bitter. The fields are full of children wielding machetes to harvest the pods. Don’t know about you, but I wouldn’t trust a nine or ten year old child alone with a steak knife, much less a machete. Also, the sacks of pods get very heavy and children are doing permanent damage to their backs trying to carry the sacks long distances. And obviously, children working long hours harvesting cacao pods are not attending school. The middlemen say that they don’t buy from farmers who use child labor, but who is watching? Child trafficking and child slavery is rampant and the companies seem to turn a blind eye to the problem. But even if they try to monitor child slave labor, there are many degrees of separation from the farmer to the international chocolate company. It is estimated that there are as many as one million children working in Ghana’s cocoa industry. If there are that many children working, they are selling it to someone.

There are several chocolate companies who certify that their products are one hundred percent  slave free. One of the companies most involved in making changes is Tony’s Chocolonely. They have devised a “scorecard” and annually survey the biggest chocolate companies to find out if they are working to end the pathetic plight of the farmers. They rank the companies on their participation in areas such as paying a living wage, child labor, and chemical management. Some companies are happy to take the survey, but some refuse to even acknowledge it. They have three award categories: Good Egg, Rotten Egg, and Broken Egg. Sad to report, but Starbucks and General Mills are Broken Eggs. Godiva isn’t going to be winning a lot of prizes, either.

We were scheduled to call at the port of Abidjan in the Ivory Coast yesterday, but they refused to let the ship dock, citing “uncertain health concerns.” The Covid 19 rate of infection in that country (population just under 28 million) on November 23 was one new case, following a week with a rate of three new cases per day, so I have doubts about the stated reason. (You have to wonder if someone decided to try to squeeze a bit more money out of the cruise line and the company refused to play along. That’s just a theory that is alive and well in our cabin, but is totally unsubstantiated.) Ghana, however, welcomed us today. We didn’t get to see any cacao trees because we were in the twin cities of Sekondi and Takoradi. Goodness, poverty appears to be the norm here; I can’t imagine how people live in the rural areas. They were very welcoming to us and seemed happy to see tour buses again after the pandemic. We bought a chocolate bar — made in Ghana, of course. It was delish! I will pop in a few pictures from Ghana below. 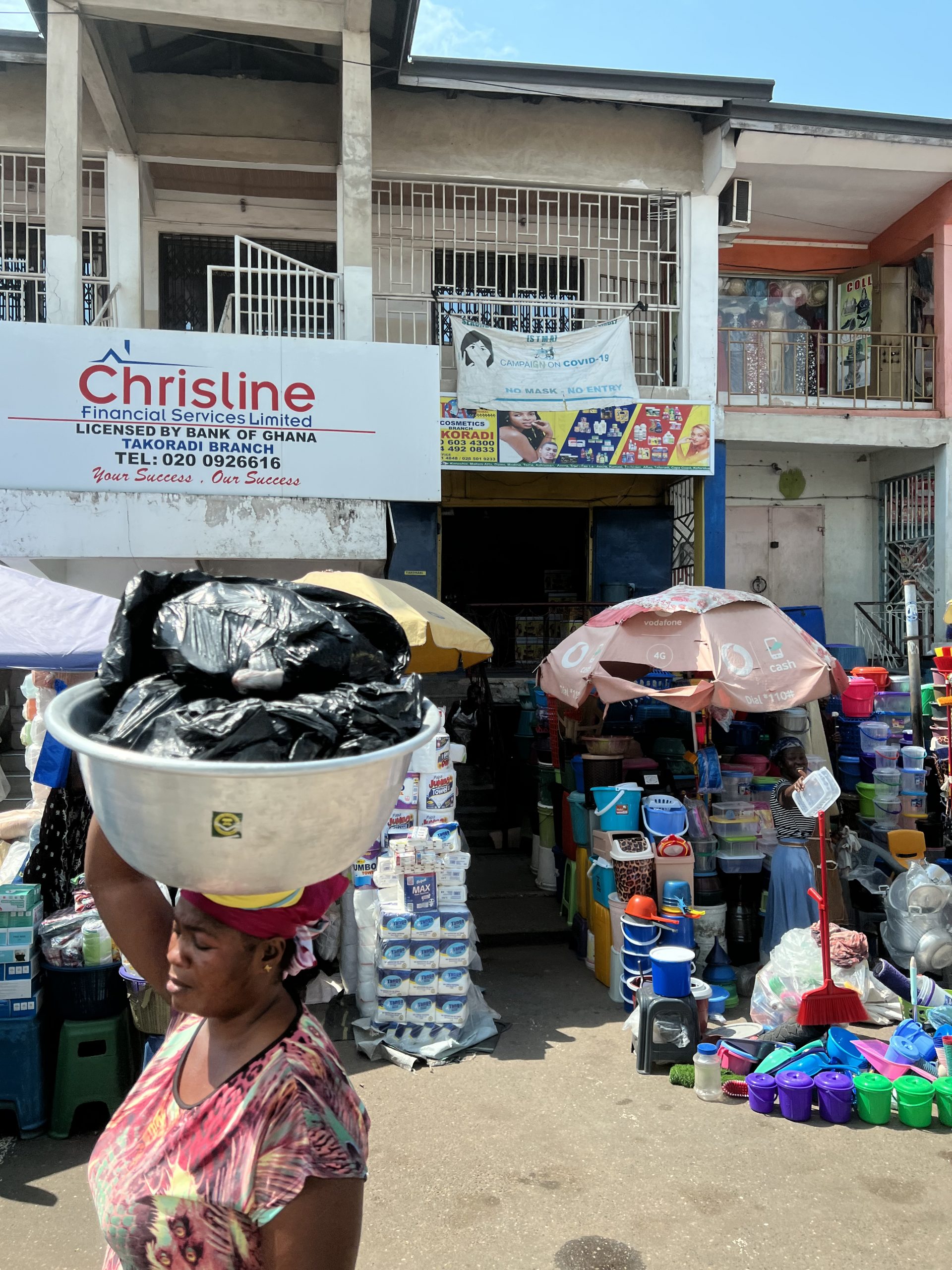 Those bags were full of fish. 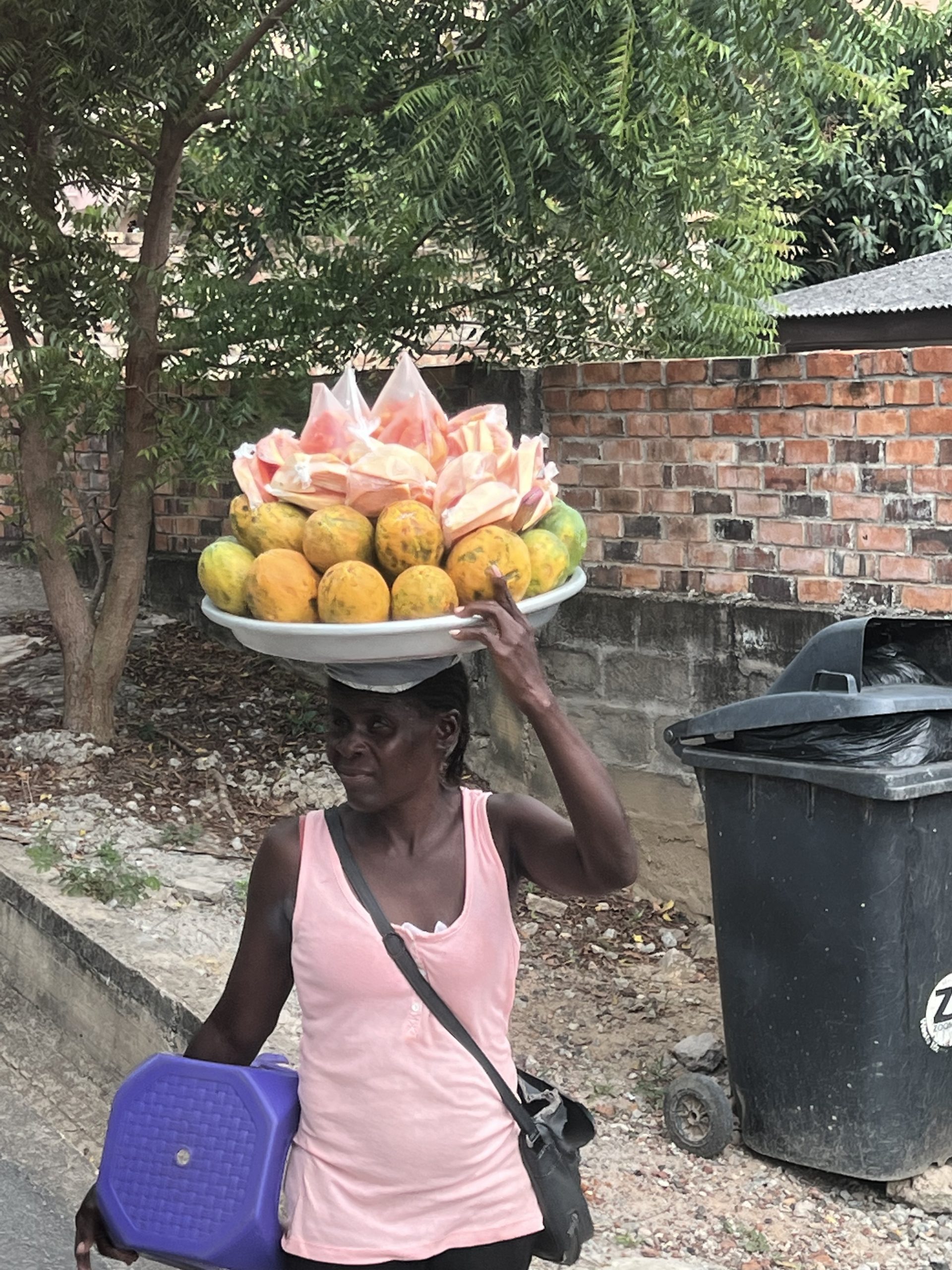 How do they do this?? 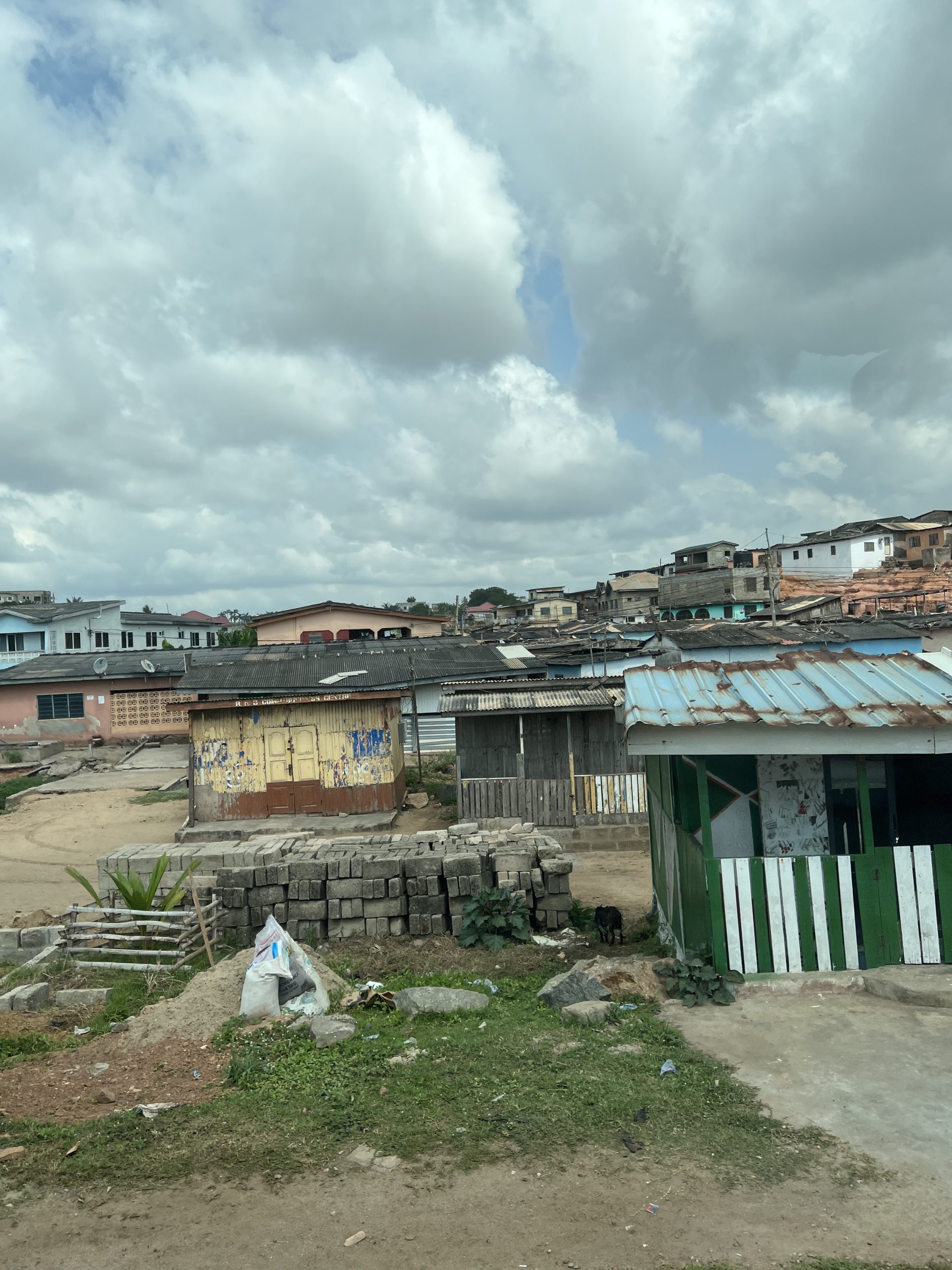 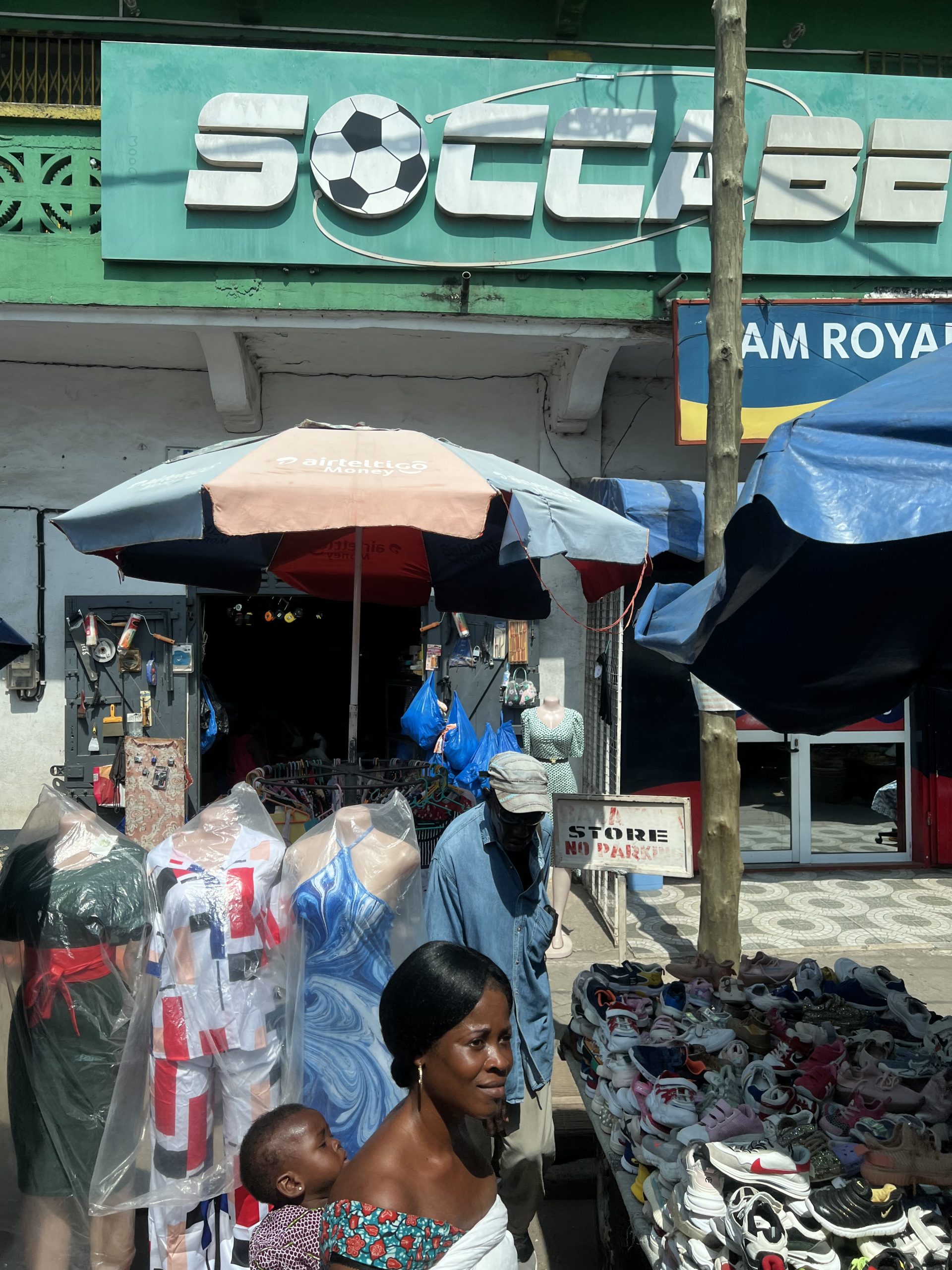 This beautiful young mother was out shopping with her baby secured on her back. 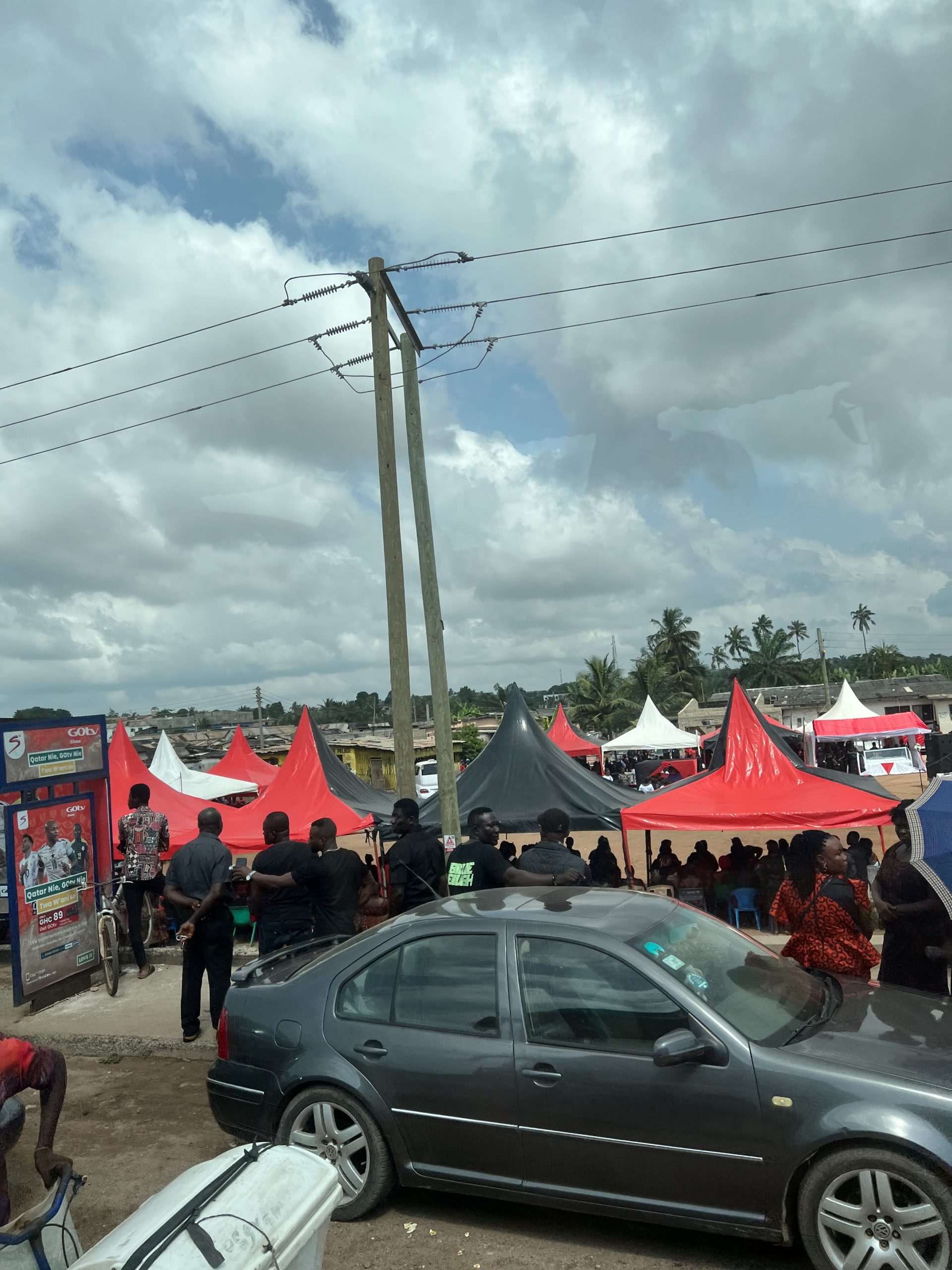 There are lots of funerals on Saturdays. The white tents signify that it’s a funeral for an older person; the red and black let you know that it is the funeral of a younger person. Don’t know what’s considered “old” and “young.” It’s an all day affair. Kinda reminded me of tailgating. 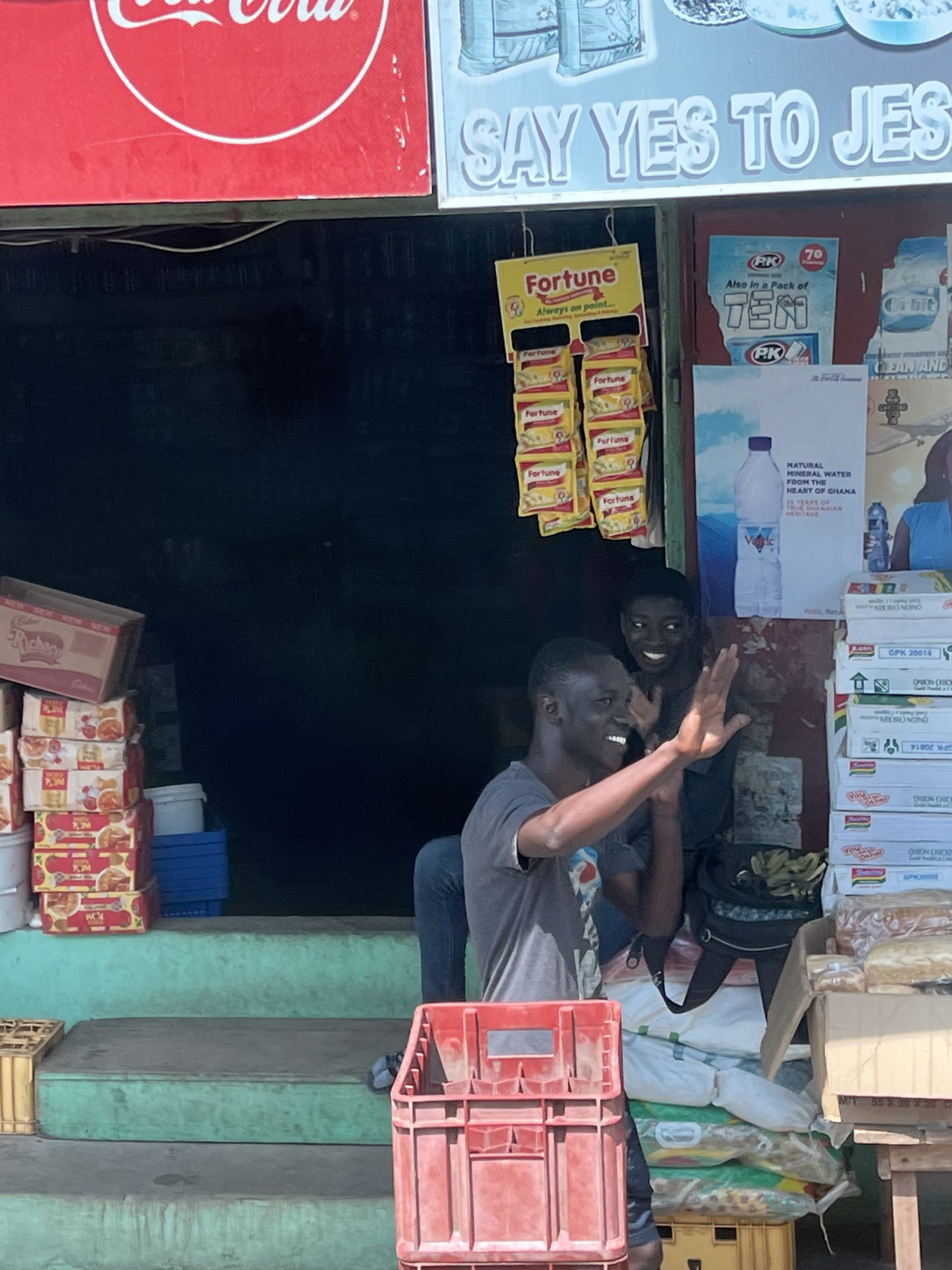 Everyone was so nice and seemed glad to see us.

To end on a sweet note, I have good news. I have found Tony’s Chocolonely on Amazon and plan to order some when we return home. The dark almond sea salt bar was highly  recommended. There have also been reports of sightings of Tony’s in Whole Foods and Aldi. I try not to come across as Polyanna; I realize that there are probably many things that we have in our homes that get there via nefarious routes, but this revelation has really upset me and I will change my buying habits. I will never look at a bag of M&M’s in the same way. If this Tony’s chocolate is good, I will be a new customer. If consumers change their habits, the industry will be forced to change theirs, too. 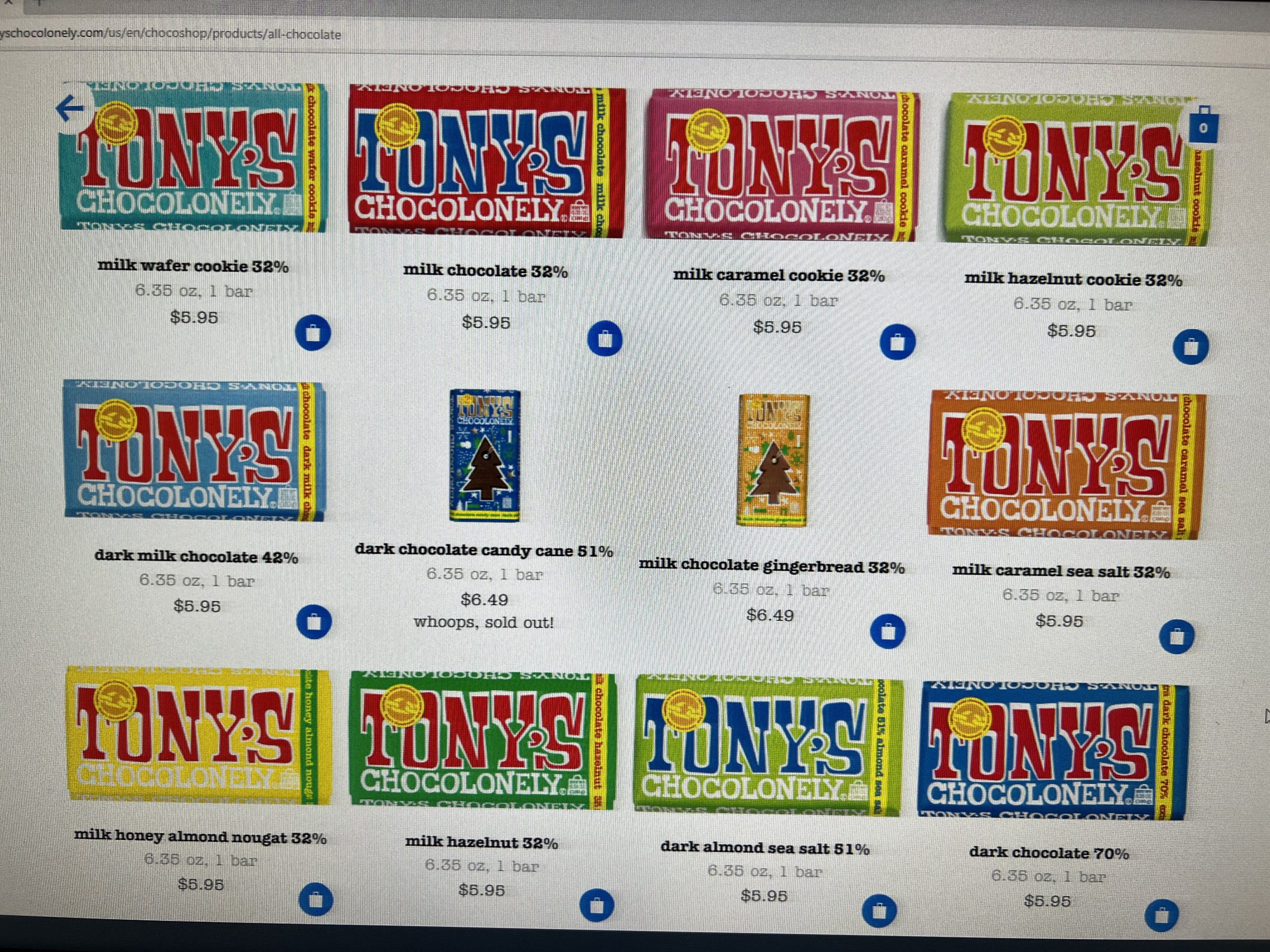