The Lunar Landscape and Weird Welwitschia

The Welwitschia has been called many names and not all of them sound complimentary. Some call it “bizarre” and some call it a “living fossil.” Wait! Here’s a good one. I saw a book entitled, “Welwitschia: Paradox of a Parched Paradise.” Not sure “paradise” is the first word that comes to mind in the Namib desert, but whatever. My personal fav name is “tweeblaarkanniedood,” the name given this weirdo plant in Afrikaans. That means “two leaves that cannot die,” which is appropriate for this plant. It is believed that some of the oldest plants are 1,500 to 2,000 years old. Welwitschia is endemic in the desert areas in Namibia and Angola. There are actually more plants in Angola, due simply to the fact that there are more land mines in Angola. They are prized by collectors because they are so funky. In the US, they can be found at the Mitchell Park Conservatory in Milwaukee. Welwitschia plants have adapted to survive by taking moisture from the dew that forms at night. The area gets about one hundred days of brief morning fog and it is believed that the leaves can take in the moisture in the fog. Also, it has an enormous shallow but wide—reaching root system that seeks gypsum in the soil. Gypsum attracts moisture and the roots are there to suck it right up. Anyway, it’s a dinosaur of a plant as you can see below. But let’s stop right here and practice pronouncing the word. Say “well-WEE-cha.”

We left the ship with a wonderful tour guide whose family has been in Namibia since the end of WWII when his parents moved there from Germany. Germany has a long and not always proud history in Namibia, but we won’t “go there” now except to say that Germany got dibs on Namibia way back when many of the old European countries were sailing around the world staking claims in the “new world.” Our guide was a very interesting fellow. He has recently returned from a sailing adventure that took him across the ocean where he became stranded in Panama when Covid struck. His adventure turned into a six year odyssey. In his younger years, he fought with the Namibian army against Angola during part of that really long war. 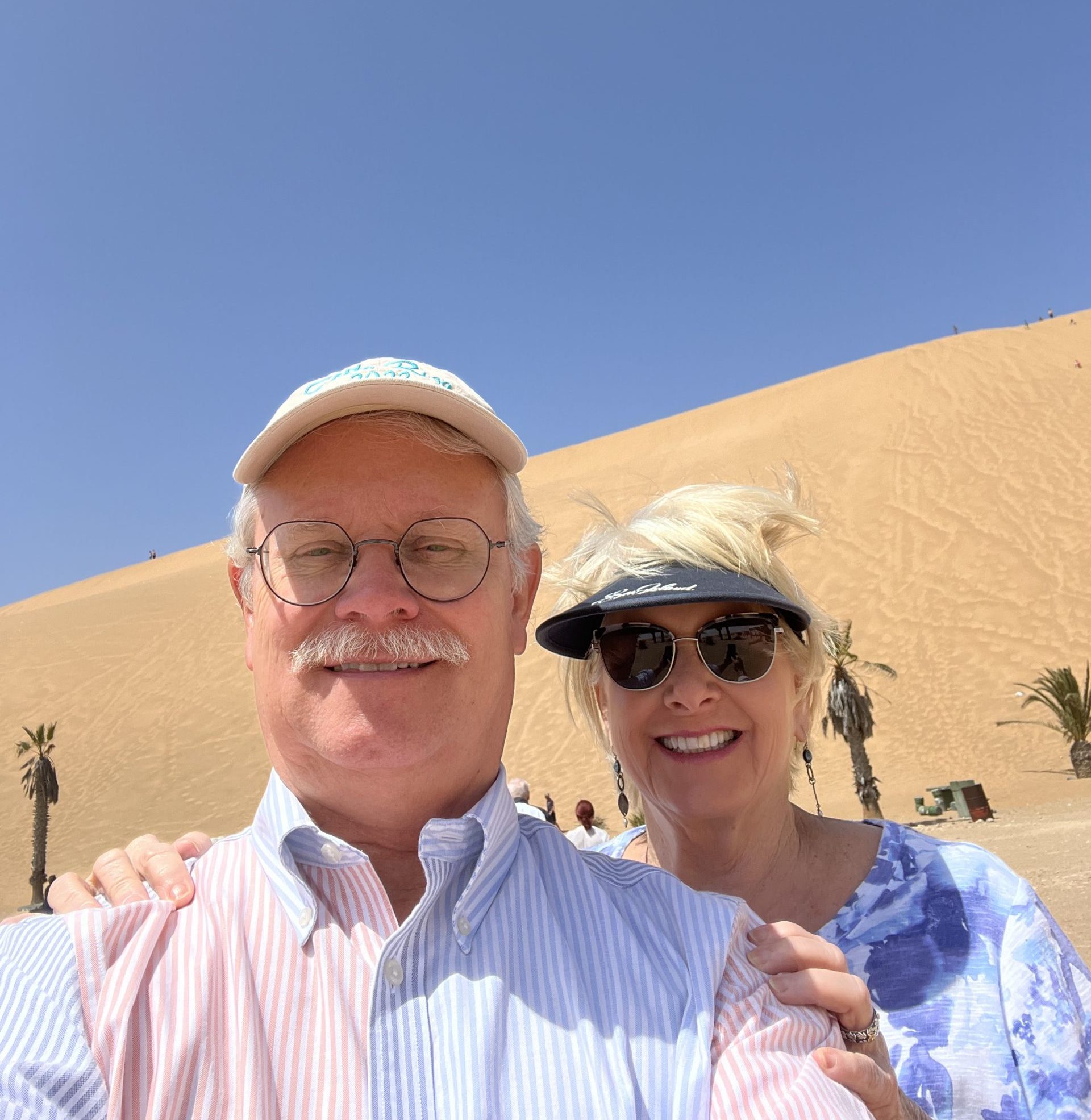 Our first stop was at Dune 7 in an area of massive sand dunes. Sorry to sound like an airhead, but I can’t remember how or when or why they are there, but they aren’t going anywhere; that’s for certain. You can see from the above photo that they are quite large.

From Dune 7, we traveled to the Welwitschia Plains to take a closer look at what has been called the world’s ugliest plant. Our guide told us that the plants in that area are thought to be 600-800 years old. He showed us the difference between the male and female plants. 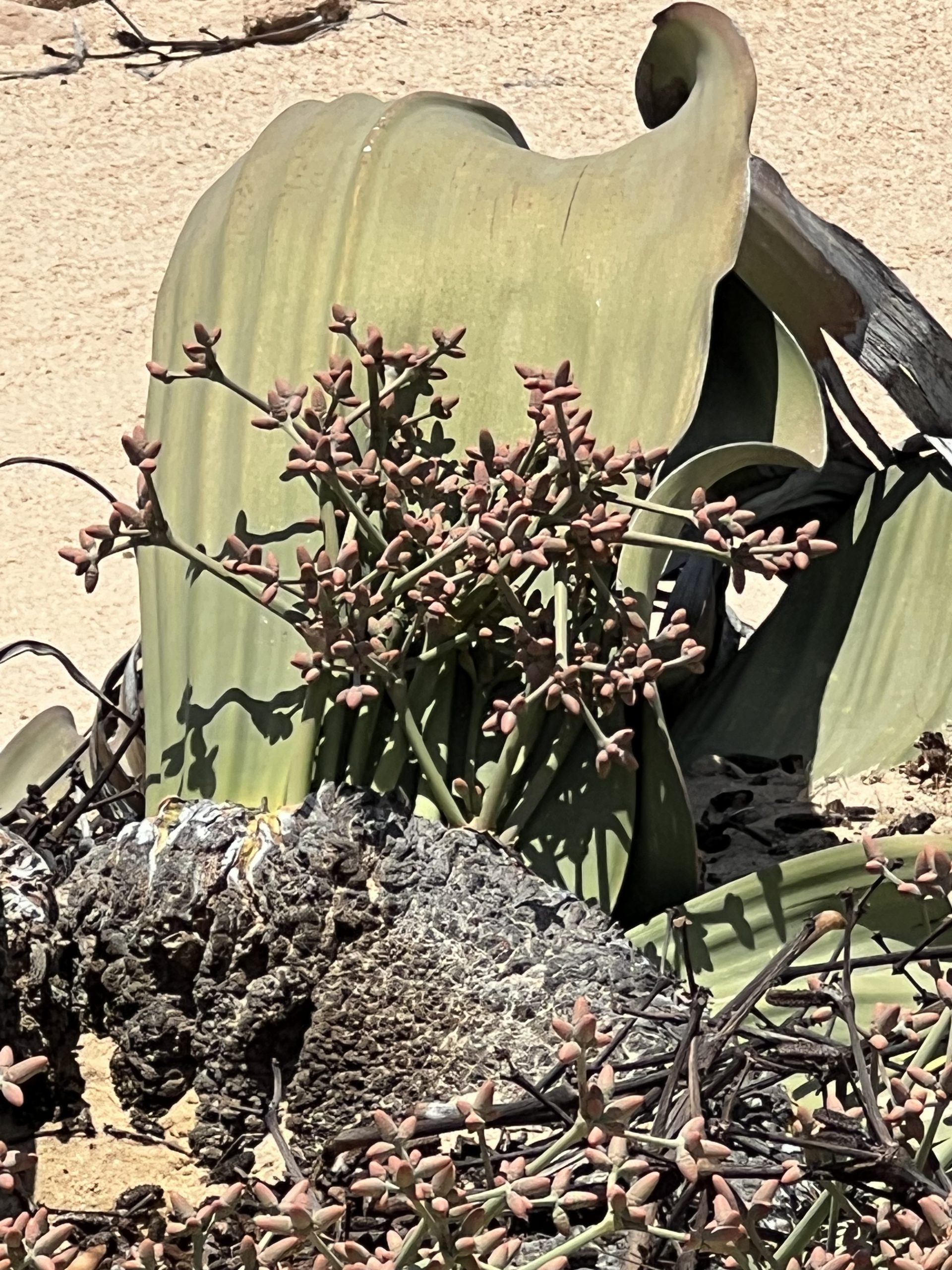 Ladies first: This old girl was huge! Note the little cones on the stems of the female plants. 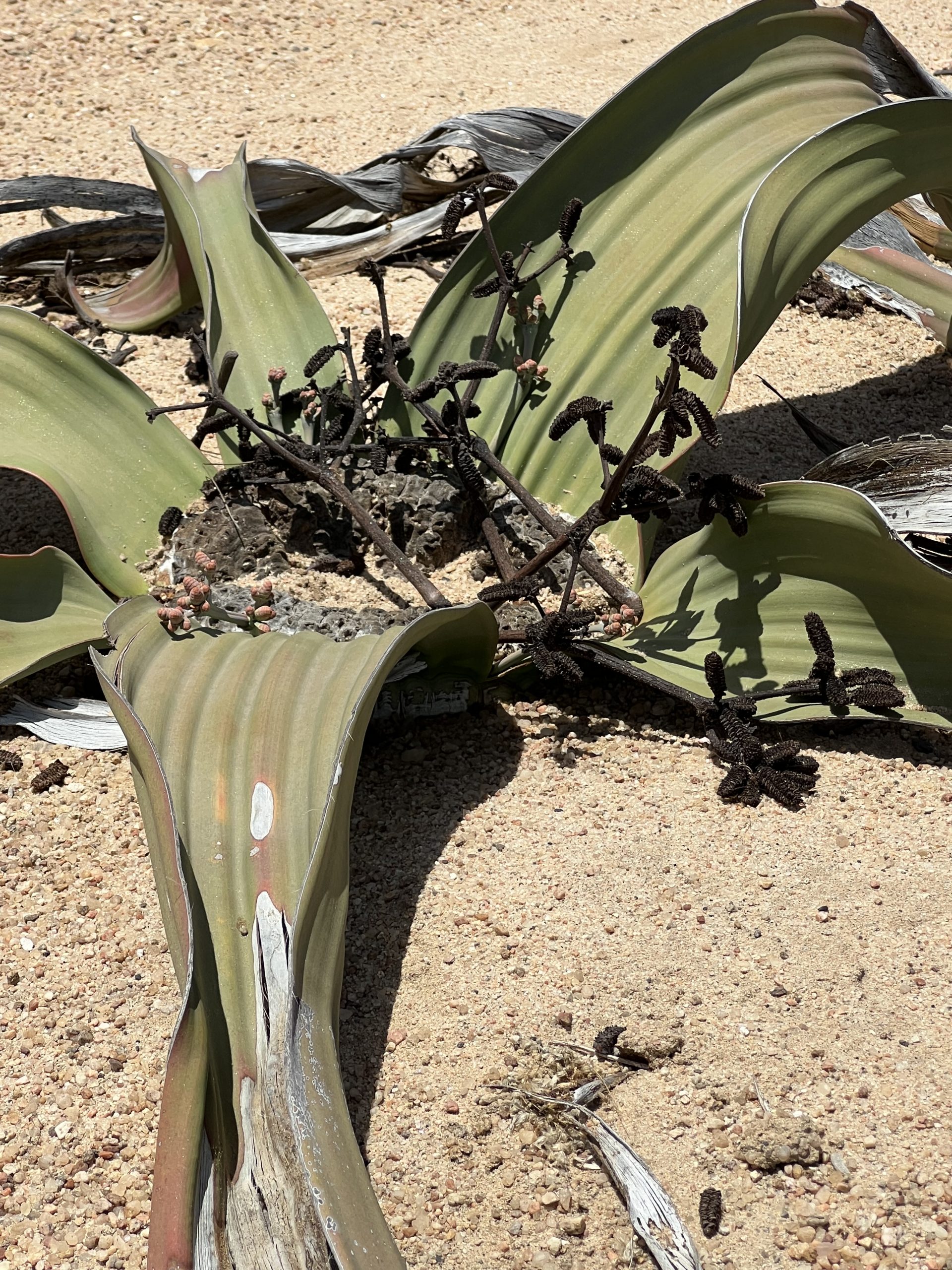 This is the male Welwitschia. There is a wasp that spreads the male contribution to the female plants to fertilize them.

From the Welwitschia Plains, we drove to the Moon Valley. This valley is actually a riverbed, and during the rainy season, the area returns to its life as a river. Then, as the rain stops, the riverbed dries up and goes back to being a lunar landscape. We drove through the lunar landscape to a charming little resort called the Goanikontes Oasis. It is truly an oasis in the middle of the lunar landscape. The area has access to ground water and grows vegetables for nearby towns. 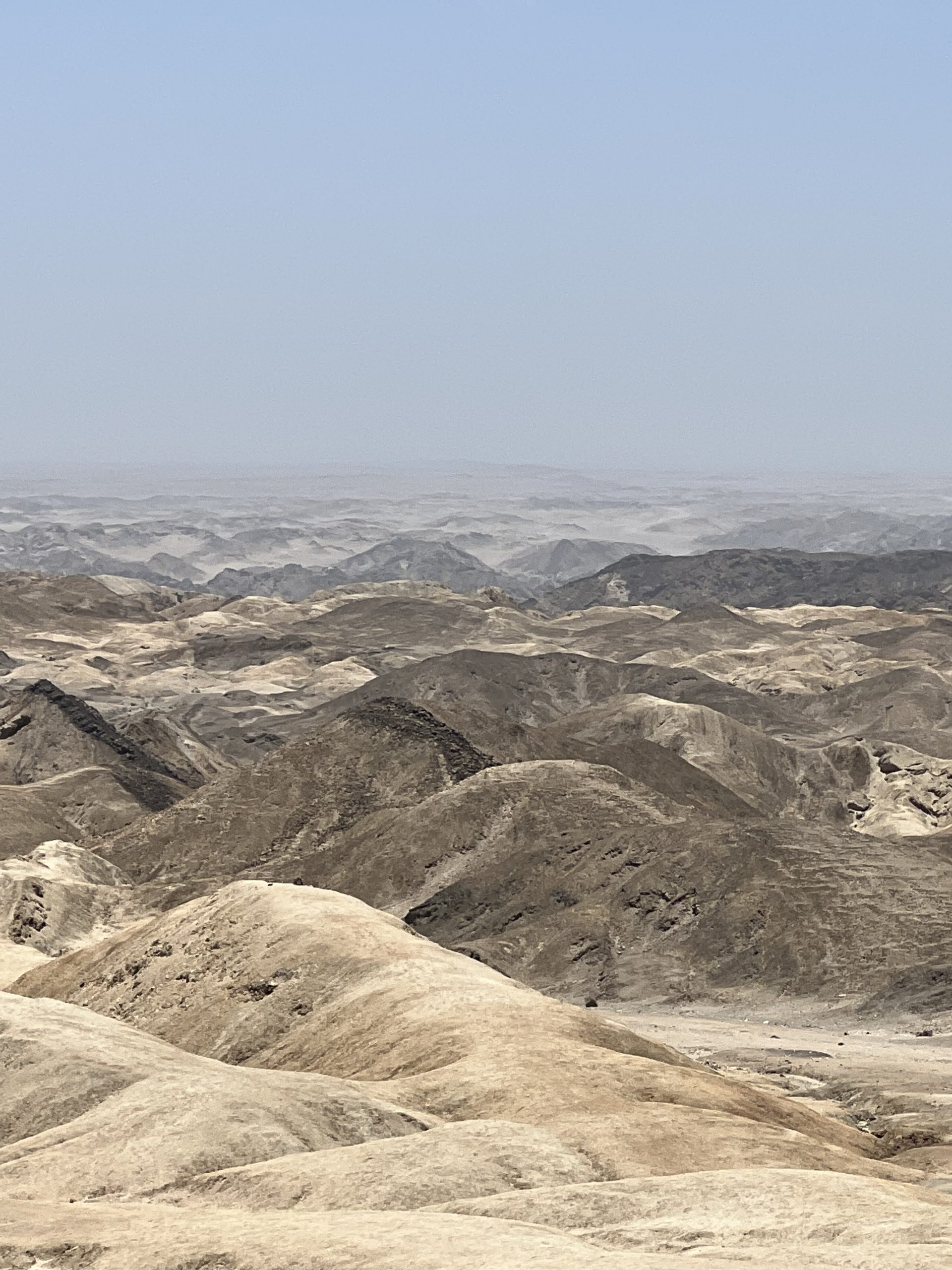 The lunar landscape in the Namib Desert.

From the oasis, we raced back to Walvis Bay. Our guide promised to show us a lagoon inhabited by flamingos. He said that Namibia is home to about sixty percent of the world’s flamingos. We caught a glimpse of some of them when we first left the dock and were anxious to see the lagoon full of the birds. Unfortunately, when we arrived, the wind was super strong and the tide was high, so sadly the flamingos had found a more hospitable place to spend the afternoon. The only picture I have to show is the one from the bus when we first arrived. It’s better than nothing, barely, but here it is. Everyone was bummed to miss the sight of all those flamingos, but heck, it’s real life, not a zoo, so you get what you get. 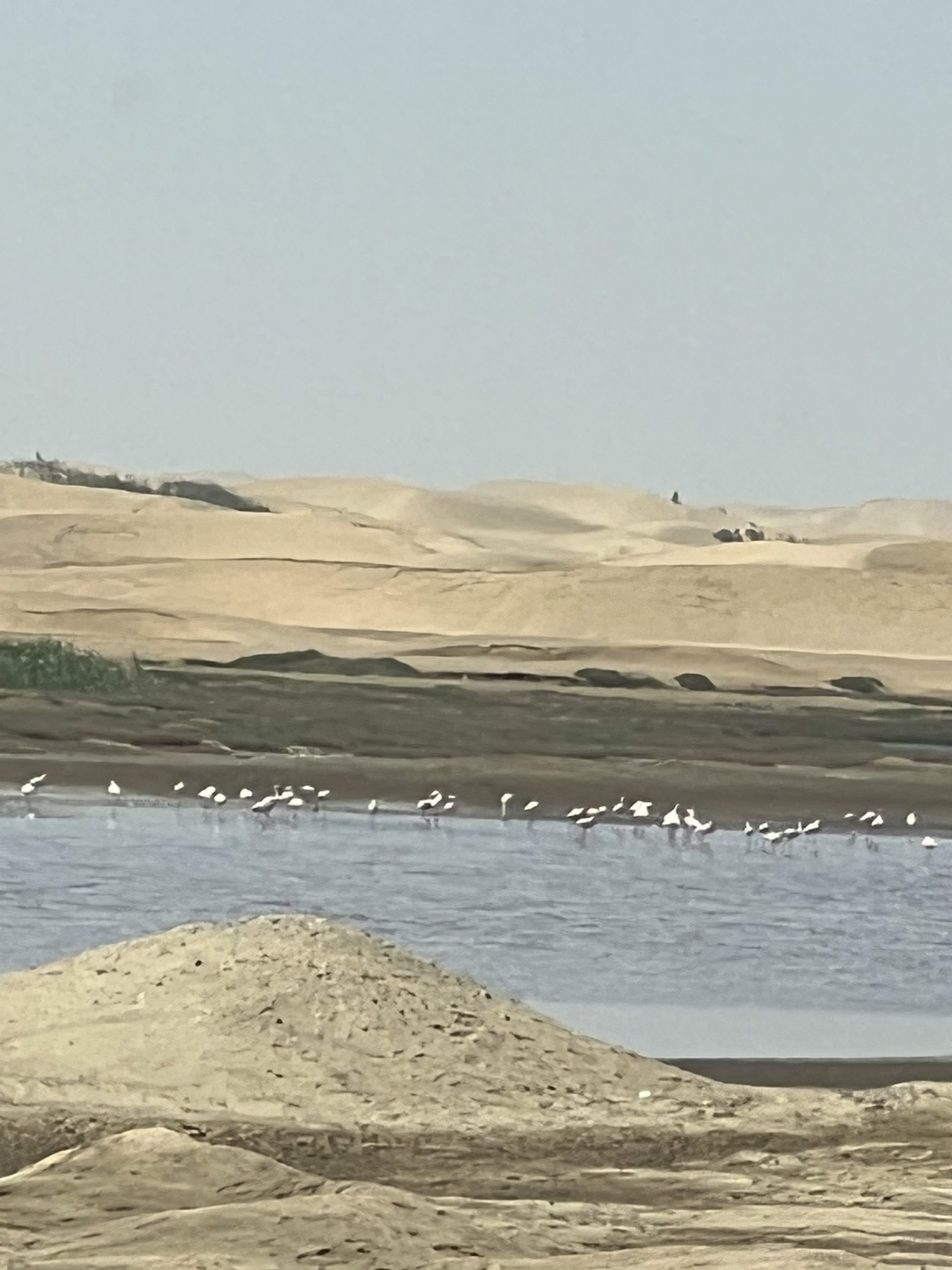 Namibia is the prize winner along the western coast of Africa, in my opinion. Walvis Bay was clean and seemed very well laid out. According to our guide, Namibia is perhaps the only country on the globe that has provisions for the care of the flora and fauna of the country enshrined in the nation’s constitution. The country doesn’t tolerate shenanigans from paparazzi and that is why Angelina Jolie and Brad Pitt chose Swakopmund, Namibia as the birthplace of their first child, Shiloh, in 2006. Unfortunately, our guide says the elected officials are all on the take. It’s just a way of life in Africa. Also, the government is falling for some of China’s tricks and may well come to regret their dealings with Beijing. One example: China built the port in Walvis Bay. Sweet, right? Well, the interest rate is high and if Namibia defaults, guess who ends up owning their port? China does things like this everywhere and those who have been burned aren’t so very fond of the CCP. In Togo, I saw the sign for the Confucius Institute at the nice big university as we drove by, so I asked the guide there if China built the school. He said that they did, so I asked them how Togo was going to repay them. He replied, “Oil.” Remember that little saying about no free lunch? Lots of African nations are going to learn that lesson the hard way. China always comes out on top. Our guide here in Namibia says you wouldn’t believe what China is doing in Angola. He says it’s not pretty.

Anyway, we really enjoyed our day in Namibia. It’s the first place since the Canary Islands that we would even consider revisiting. But we have met so many wonderful people everywhere and it makes us sad that, in most of the countries we’ve visited, there seems to be no way out of the poor living conditions, poverty, and lack of quality education. There are so many people in this world with so much potential that will go unrealized. I see places like Namibia as a beacon of hope unless their lousy leadership lets China destroy their potential. I guess that’s just more proof that elections have consequences and we would all be wise to remember that.