The Aquila Private Game Reserve has a nice dazzle of zebras. They also have a pride of lions, a herd of water buffaloes, a bloat of hippopotami, and a crash of rhinos, among other types of wildlife. I started down the rabbit hole of the genesis of assigning groups of animals their collective nouns, but thought better of it. Instead, I decided to concentrate on the wonderful animals: what we saw and learned instead of the inane history of naming groups of animals.

We are wrapping up the post-cruise Cape Town portion of this adventure in Western Africa. Yesterday’s plan was a trip to the Aquila Private Game Reserve about a two hour drive from Cape Town. We were told that there would be a game drive and that the lions would be in an enclosure. Rick read “zoo” when he came to the word “enclosure” and balked at the idea of riding two hours out of town to go to a zoo, but he came along anyway. It ended up being a really nice day. The reserve is huge. Our guide, Amar, told us how many hectares the reserve included, but I can’t remember exactly. I do remember that it equaled about a gazillion acres, give or take a few. The terrain there is totally different than the land around Cape Town and the winelands. The reserve was rocky and mountainous; the land was dusty and dry and the vegetation more like you find in a desert. We piled into big jeeps and headed out on the bumpy dirt roads. 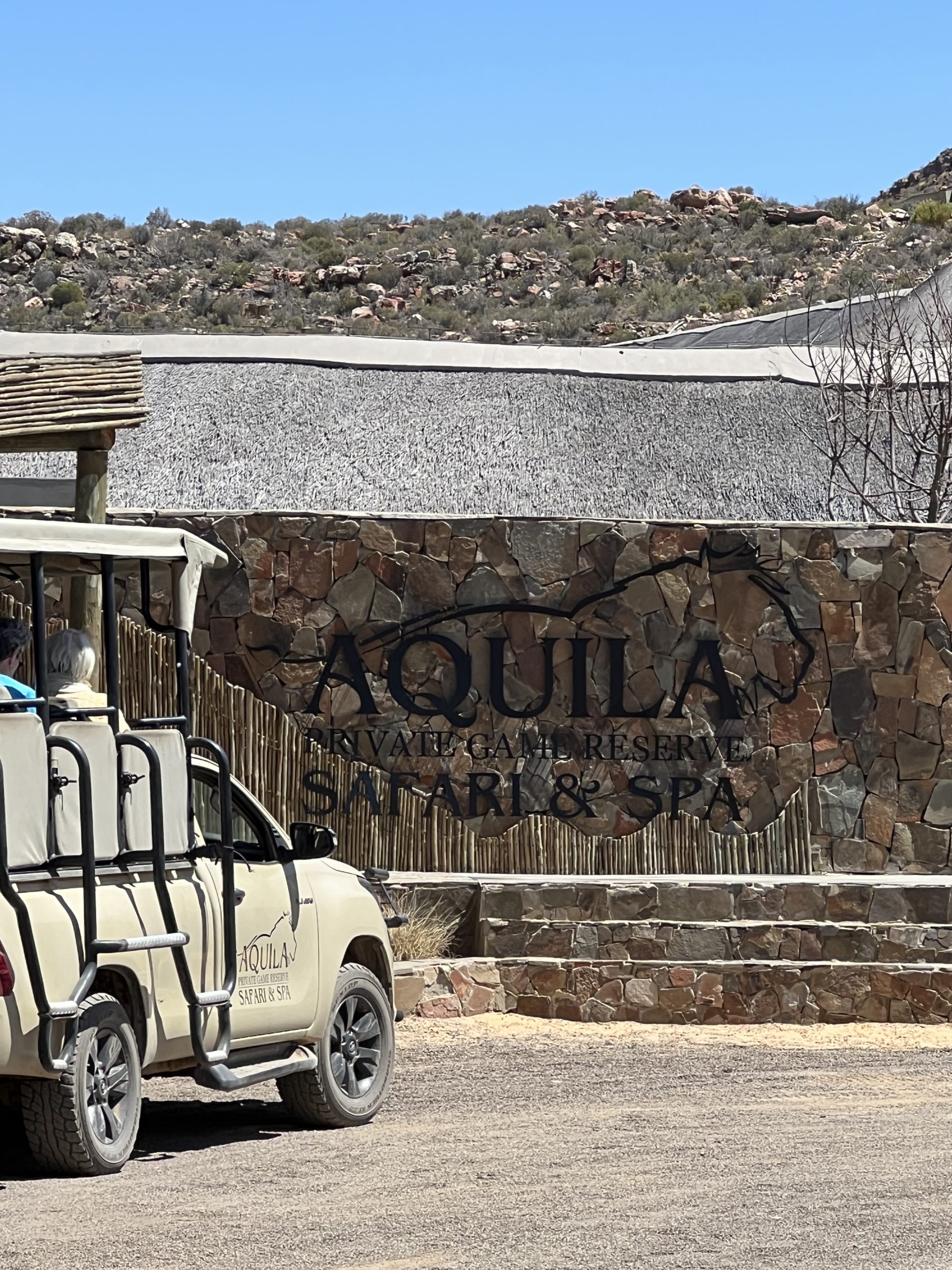 The Aquila Private Game Reserve was a pretty swanky resort. In addition to going on game drives, you can ride horses or ATVs. There are at least two swimming pools and the accommodations look nice. 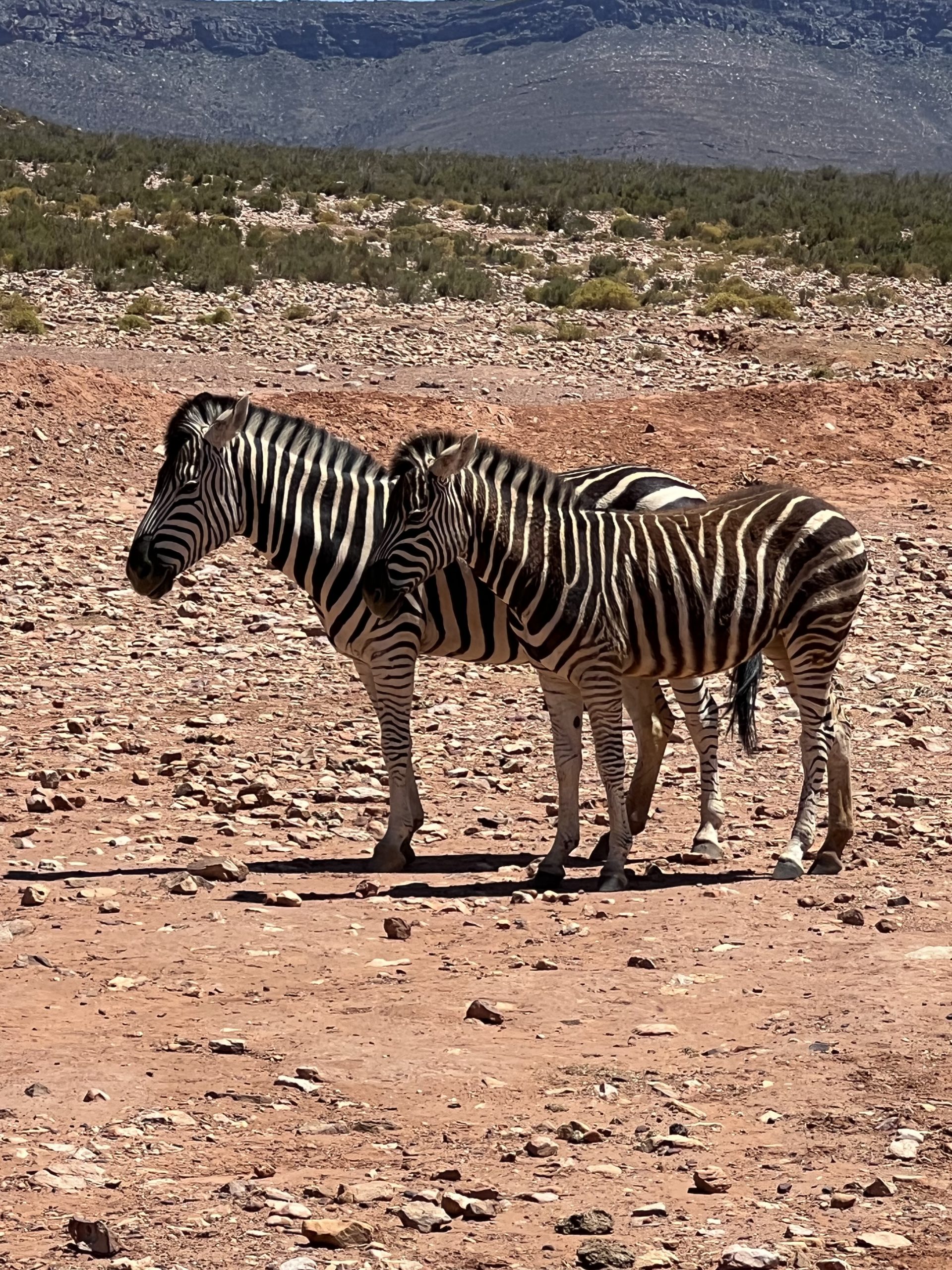 I always love seeing zebras. Amar told us that zebras are nervous animals, always on the lookout for trouble. When a female gives birth, she goes away from the dazzle and stays away for a few days. That way, the newborn can learn his mother’s stripes since all zebras have different stripe patterns. She must return to the dazzle with the newborn within a few days and introduce the little one to the group. If she fails to do so within a the right time frame, the dazzle will ostracize the newborn and kill it because a newborn makes them weak and vulnerable to animals that see zebras as prey. Note the brownish stripes on the smaller zebra above. Amar says that is due to differences in diet. The one in the foreground is eating something different than the others. Zebras are not bothered by flies and other flying insects because their stripes confuse the flies and they can’t decide where exactly to land. The funny little guy below was scratching his backside on the tree. 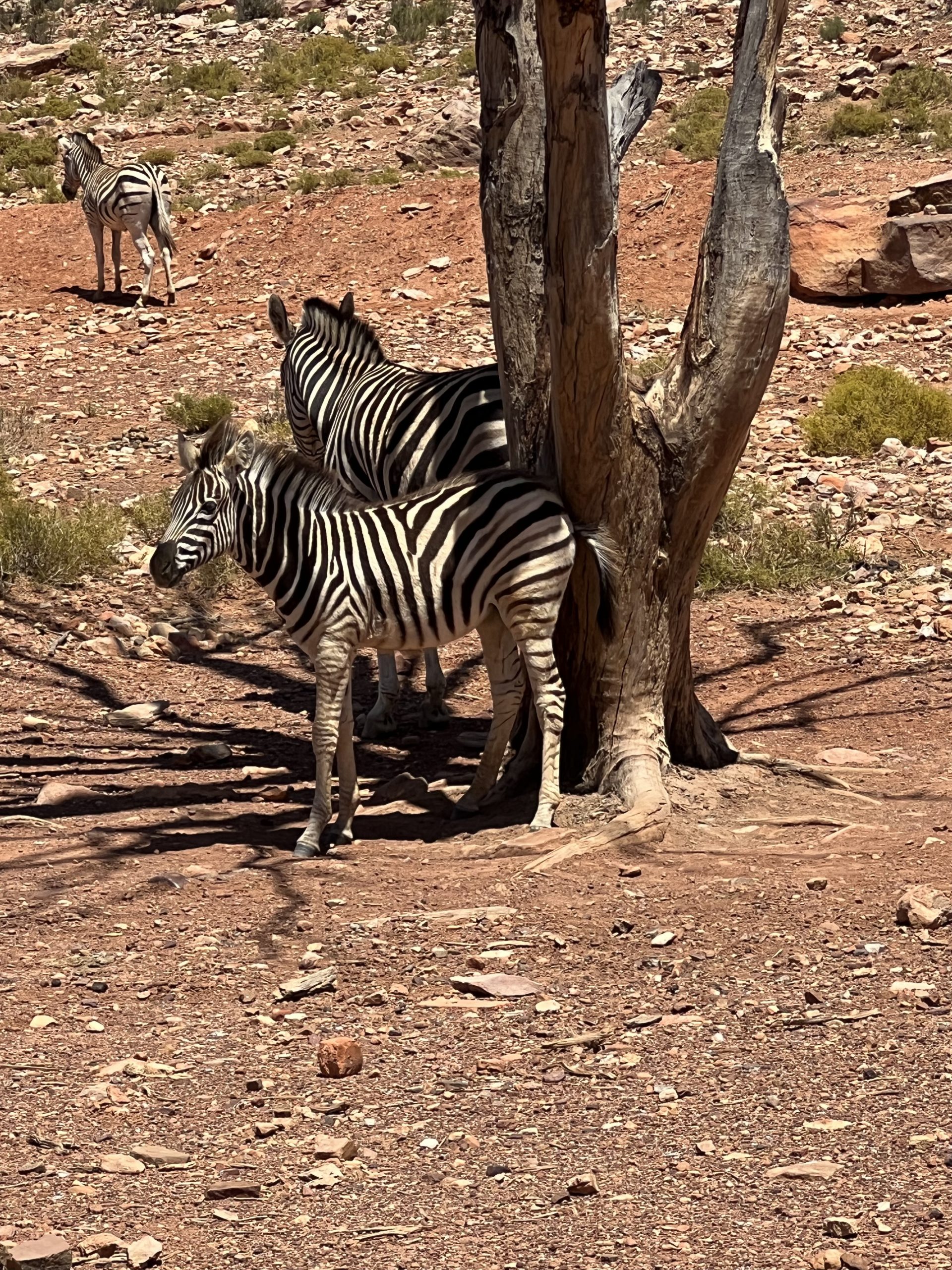 The water buffaloes were milling around near one of the mud holes. Amar says that the water buffaloes are the reserve’s “bad actors.” They crash into the jeeps and generally create havoc. He said that they get the blame for everything even if/when they don’t deserve it because they are always up to something anyway. It’s easy to let them take the fall for mishaps. In the second picture, the alpha male spotted three workers walking along a road on the ridge and got closer to them, giving them the stink-eye. 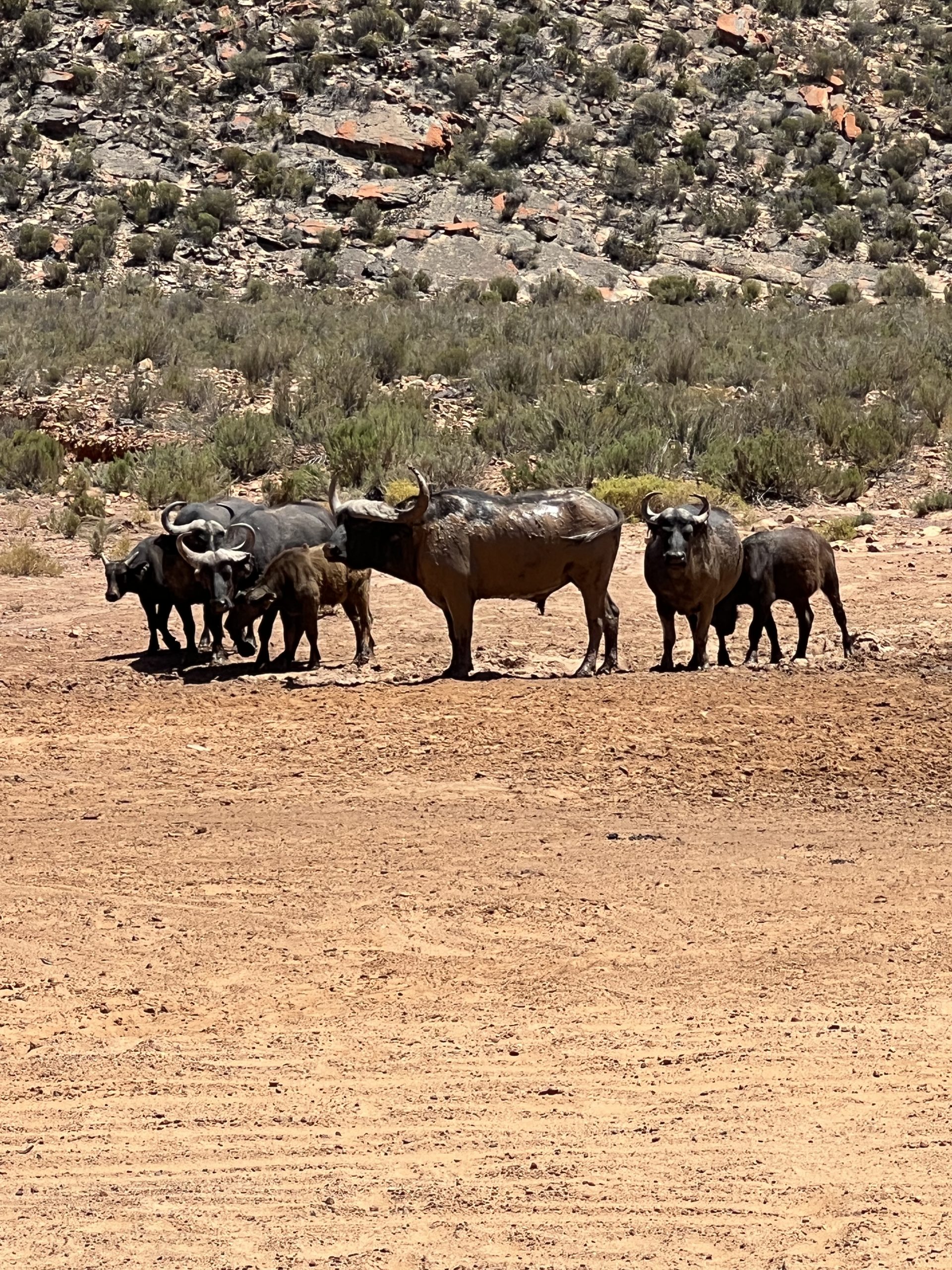 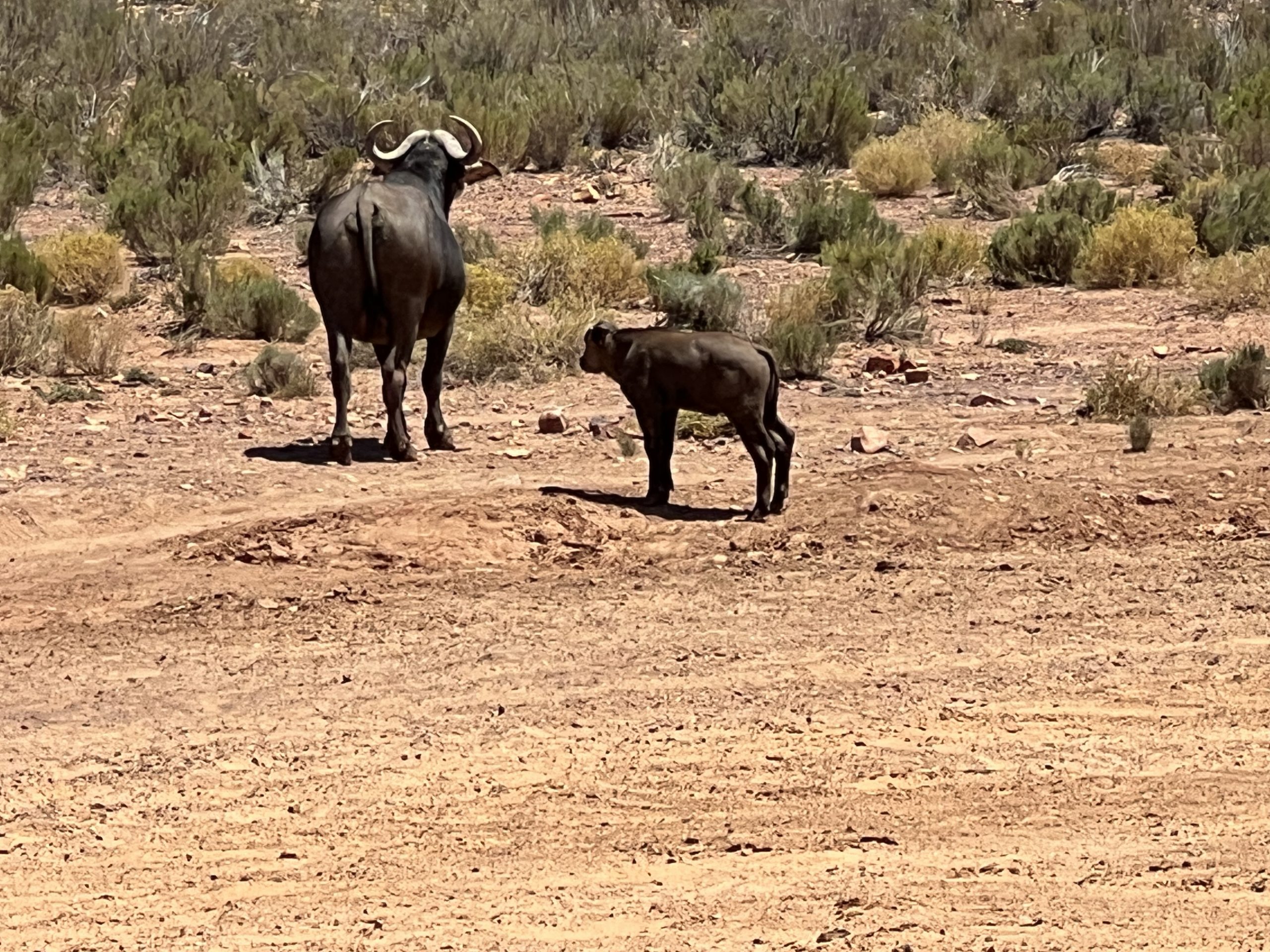 The hippos spend their days in the water and come out at night because their skin is very sensitive to sunburn. It’s not a good idea to get between a hippo and his pond or river. It would be akin to getting between a Brit and a cruise ship breakfast buffet. (Gotta get those pork ‘n beans on toast! Serious question: Does the Royal family eat this stuff for breakfast? Leave your answers in the comment section. Melinda will know; she used to live there.) Amar says hippos kill more people than the Big 5 combined. Amar says that there is a young male in this bloat who has challenged the alpha male once. It didn’t end well, but Amar says he will grow and get stronger and come back for a re-match. 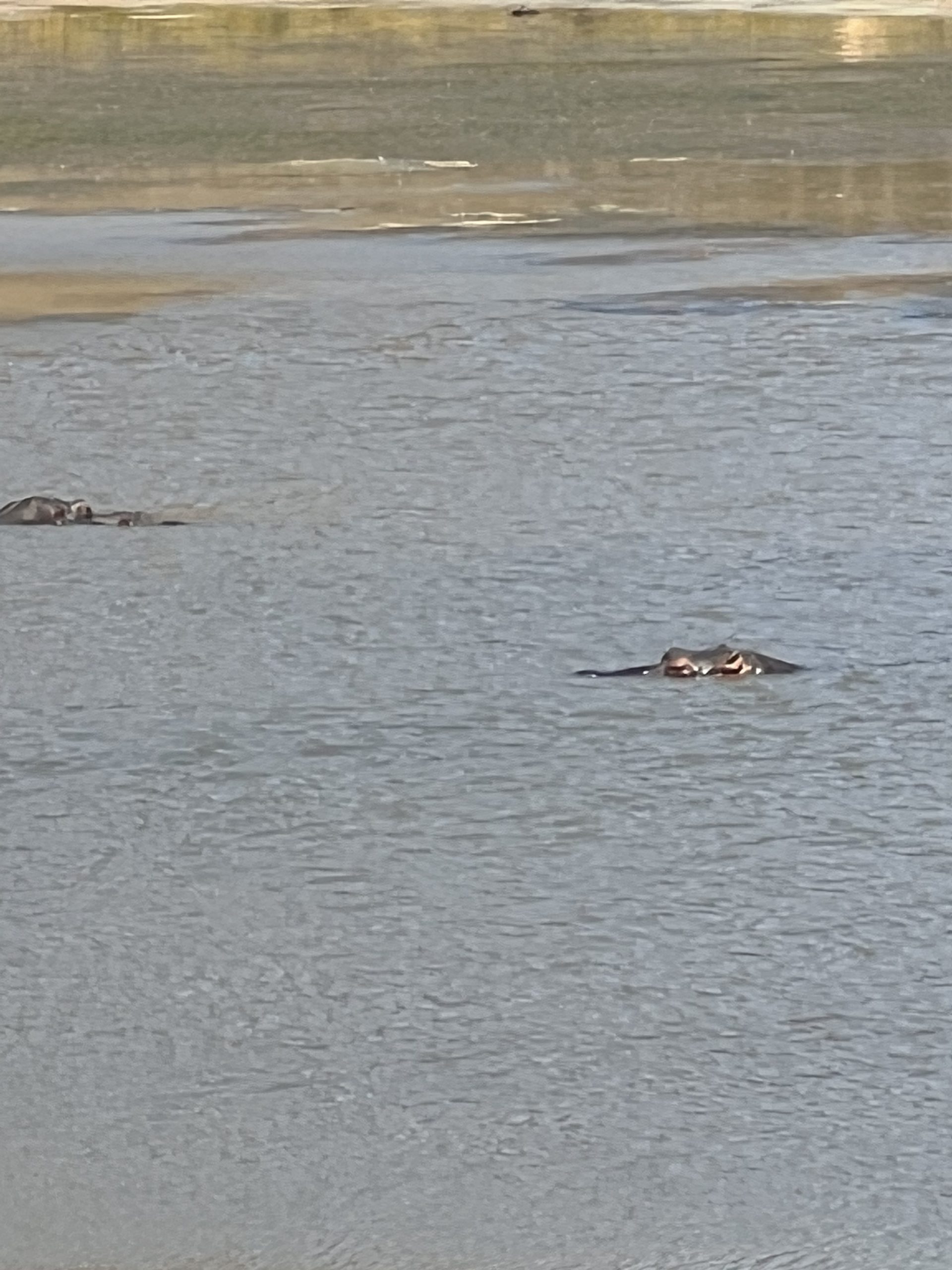 This male ostrich came closer to try to intimidate us. Apparently, they have quite a kick! Amar says that, although their brains are smaller than their eyes, they are fairly smart. He says they can count. If they have 21 chicks in a brood and one goes missing, they will swipe one from another brood to replace the missing chick. 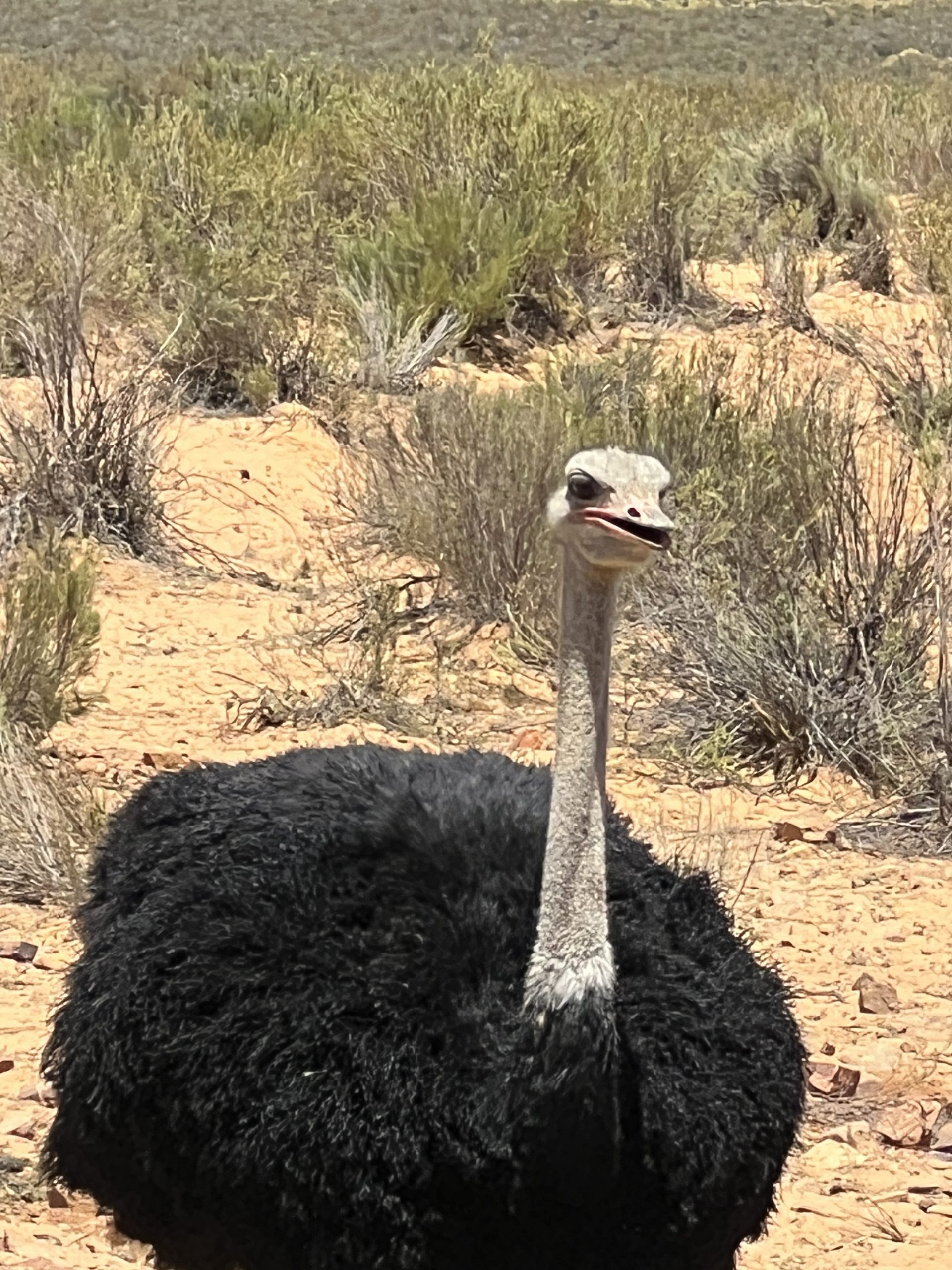 It was news to me that a giraffe’s color darkens as he ages. Their heart is a busy organ and weighs 25 pounds. They can’t tolerate their heads being lower than their hearts for more than about 15-20 minutes. Rick says that doesn’t make sense. It seems that it would be easier to pump blood to the head if it were at the same level or lower than the heart. 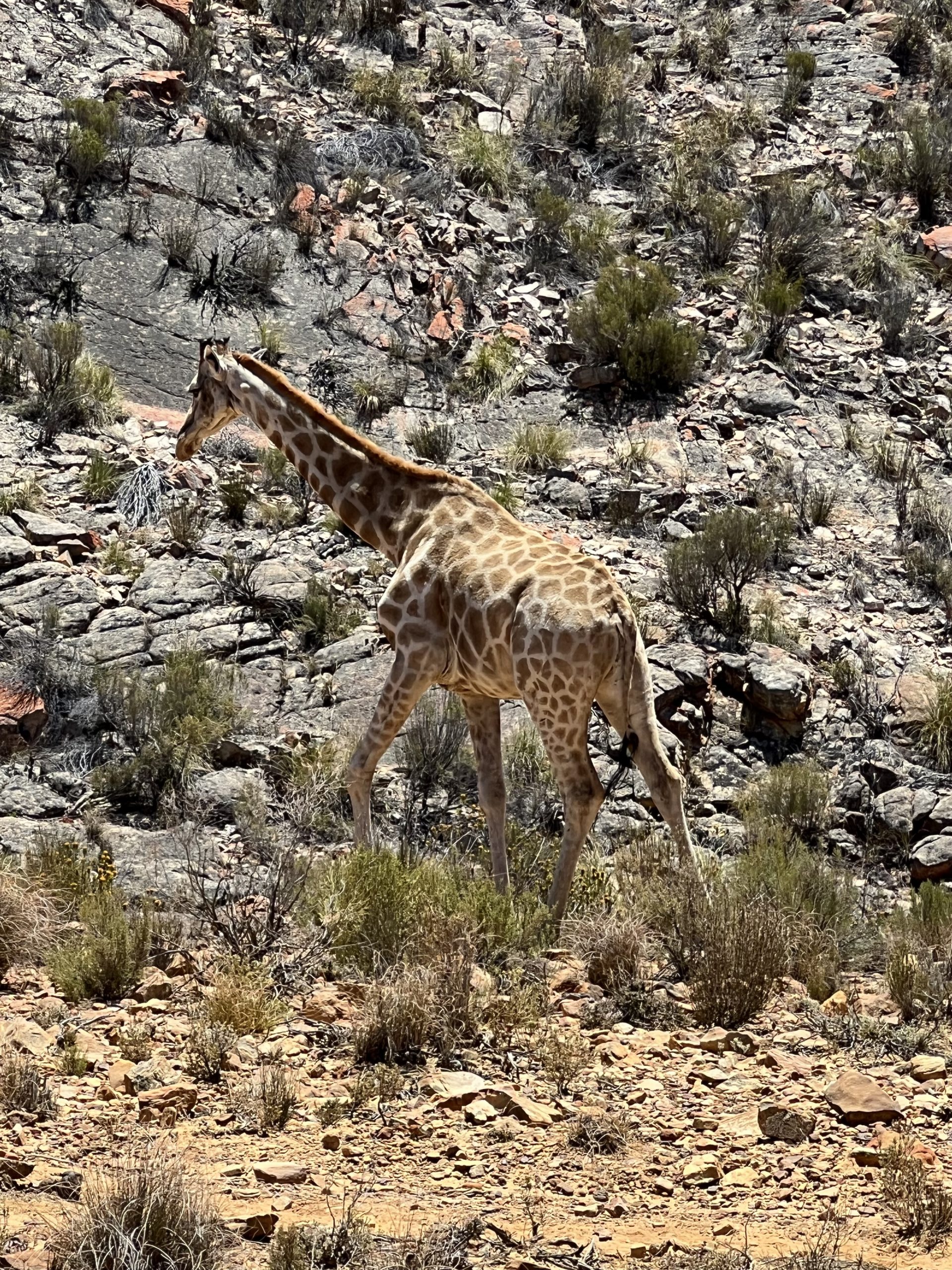 I think this was the first time we’ve seen a rhino in the wild. The big mama below stayed close to her baby. Her tusk was removed to make her worthless to poachers. It grows to about three feet in length and will grow back after being cut off. In the third picture, they were enjoying a mud bath. Amar says that occasionally they sell a rhino to another reserve and that they fetch one to two million Rand! 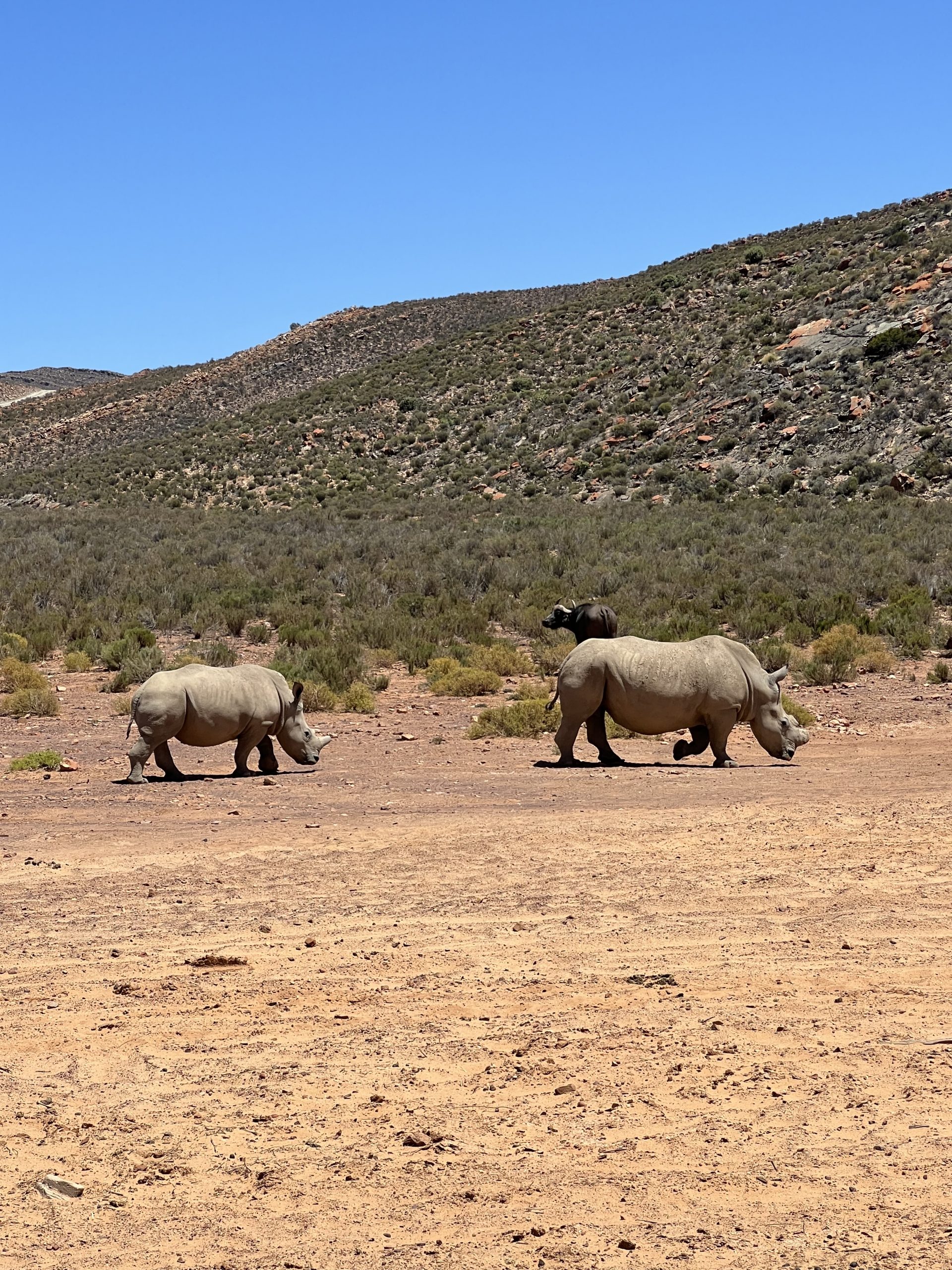 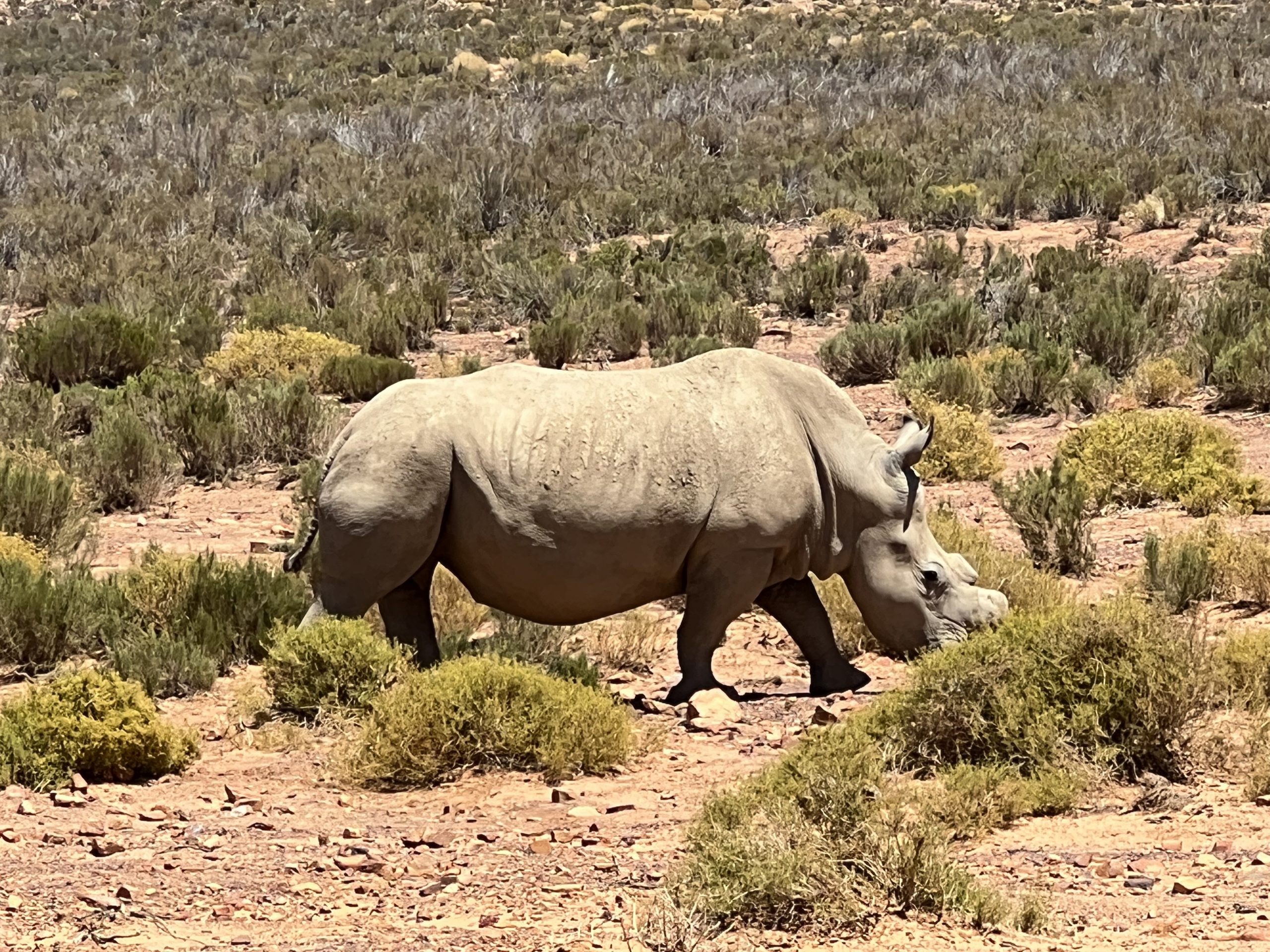 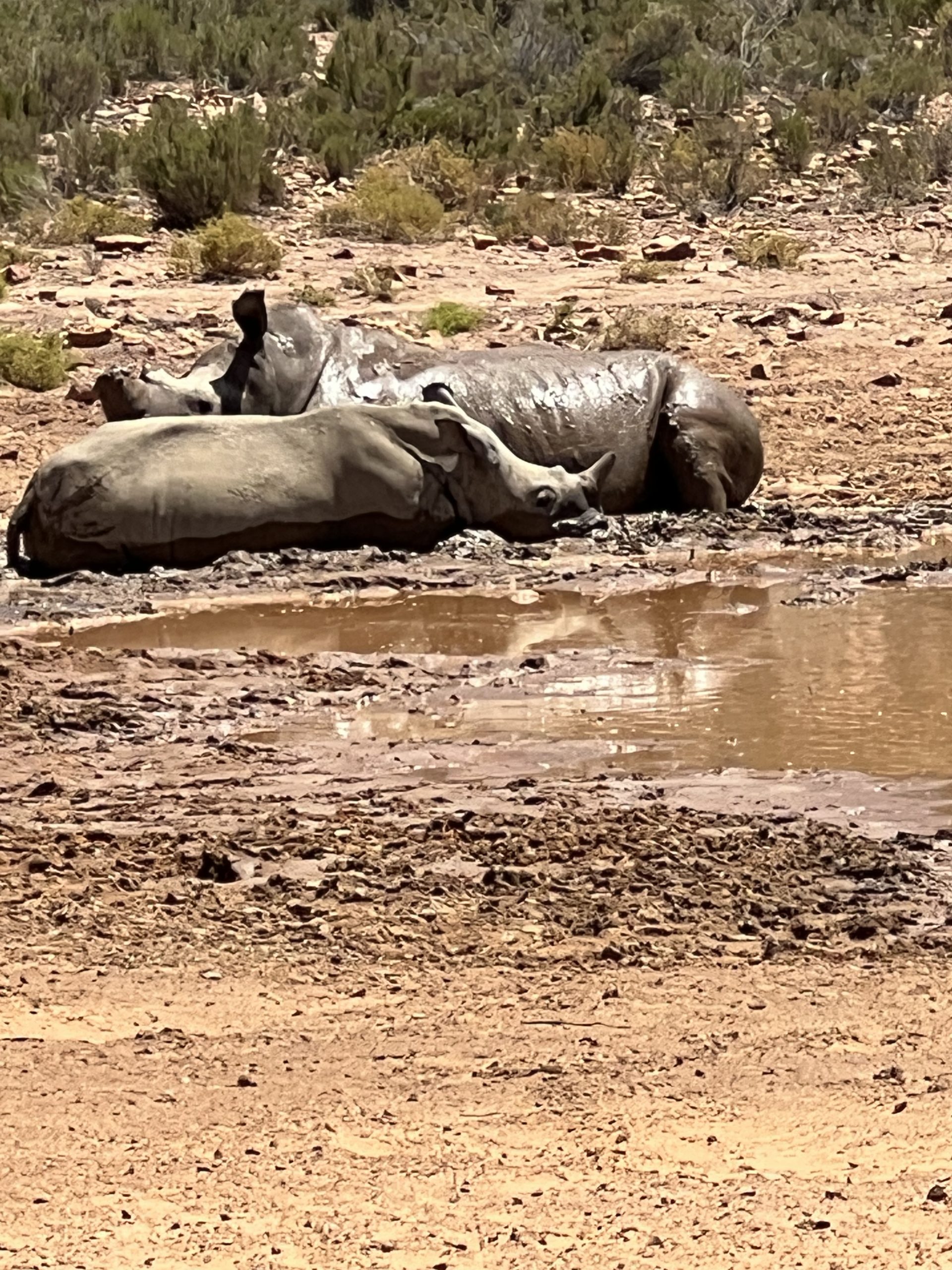 We also saw elephants, elands, lions, and wildebeests, but the pictures aren’t good enough to insert here. But, in lieu of pictures, I will finish with a great story that Amal told us about wildebeests. The people of Africa call the wildebeest the “spare parts animal.” It has been said that they have the tail of a horse, the sloped back of the hyena, the horn of a juvenile buffalo, the rump of a Maasai donkey, the beard of the billy goat, the face of a grasshopper, and the brains of a small rock.