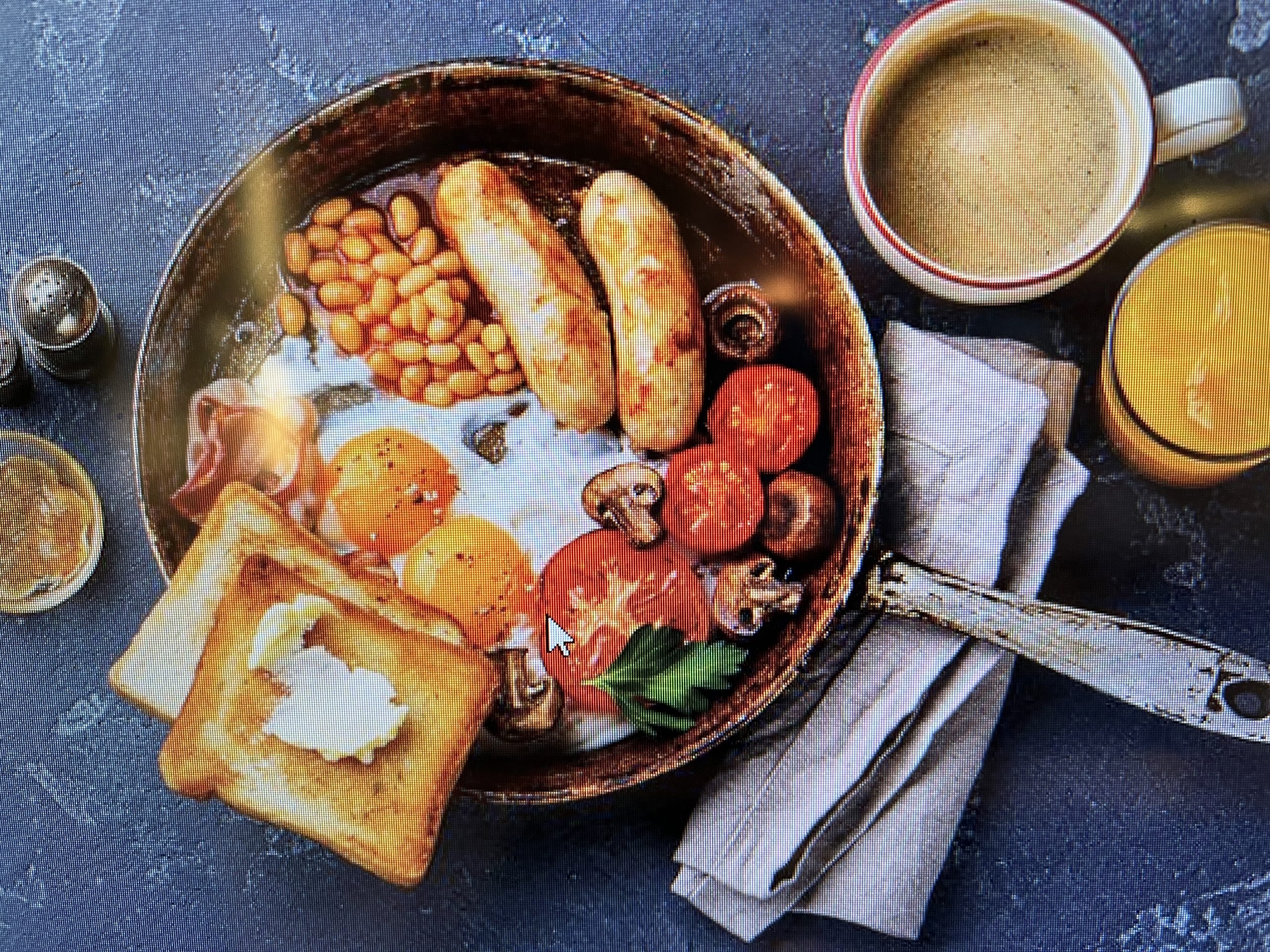 I couldn’t let it go. It’s been bugging me for years and I had to find out. I realize that I am not technically traveling right now, but this post is related to traveling, so I am going to write it. Think of it as a public service. Since the first time we set foot in the Motherland (AKA the UK), I have been obsessed with the Full English Breakfast. Sure, we’ve traveled alot and I’m used to seeing the Japanese section of a breakfast buffet, so I know different cultures have different ideas about breakfast. When in Southeast Asia, I love pho for breakfast. But I thought we were basically the same as the Brits, so imagine my surprise to see baked beans, sauteed mushrooms, and broiled tomato halves on the breakfast menu the first time. My eyes quickly scanned the restaurant wondering exactly where these odd breakfast items ended up. To my shock and surprise, I found that people who spoke English with a funny accent were scarfing down the stuff. There is an oft repeated quote, usually attributed to Sir Winston Churchill, that “England and America are two countries separated a common language.” (Actually, I have read that the quote was made by George Bernard Shaw.) I believe that it can also be posited that we are separated by a common meal. But think about it: you never see grits on a buffet in the UK. (Or even most of the US, for that matter.) I read that back in 1927, a Heinz company executive  started the push to include beans on the English breakfast menu in order to sell more beans and it worked. Proves the old adage that first you create a product and then you create a need.

I wanted to test my hypothesis that it is possible to change an entire nation’s beliefs about some things in just one generation. Even strongly held beliefs about sacred institutions. You know, like breakfast. As it turned out, we were charged with keeping Winston and Sullivan, our two youngest grandsons, this past weekend and I hatched my plan. Rick called it “evil” at first, but at the same time, I could tell that he was curious, too, but would not admit it. I did feel a bit guilty, but I told myself to get a grip; after all, it’s food and an entire nation starts every single day eating it! Sunday morning was test day. The boys started complaining of being hungry so I sent them to the table while I made the toast and heated the beans. I decided that, to be legit, we would have to participate along with the short people. (I call them that and will as long as I can, although I know it won’t last long.) Four plates were prepared. I cut the toast to prevent messy clean ups, but the Brits slap those beans on whole slices of toast. Rick reminded me that we were leaving in a few hours for a two and one half hour car ride and questioned the timing of giving him a plateful of beans. I winced a bit and almost scrubbed the experiment, but soldiered on despite the lethal threat to my olfactory sense.

Being open minded, hungry,  trusting, and four years old, the boys raised their forks and scooped a big bite right into their mouths. We did the same. I was surprised that they didn’t give us the kiddie version of “WTH?” But immediately after the first bite, the dawdling started. I asked Sullivan what was wrong. He sweetly whispered, “I don’t like it.” I turned to Winston and asked his opinion. He said, “Annie stinks.” I asked if he meant Annie stinks or if Annie’s breakfast stinks. He said that Annie’s breakfast stinks. He was right; they don’t smell yummy. (Reminded me of the time his father told someone that his daddy made people sick. He meant that his daddy makes sick people better.) The experiment ended at that point because I couldn’t be cruel. I made toast with peanut butter and grape jelly. It was more warmly received by everyone except Rick, who doesn’t like peanut butter. (Weird, I know.) 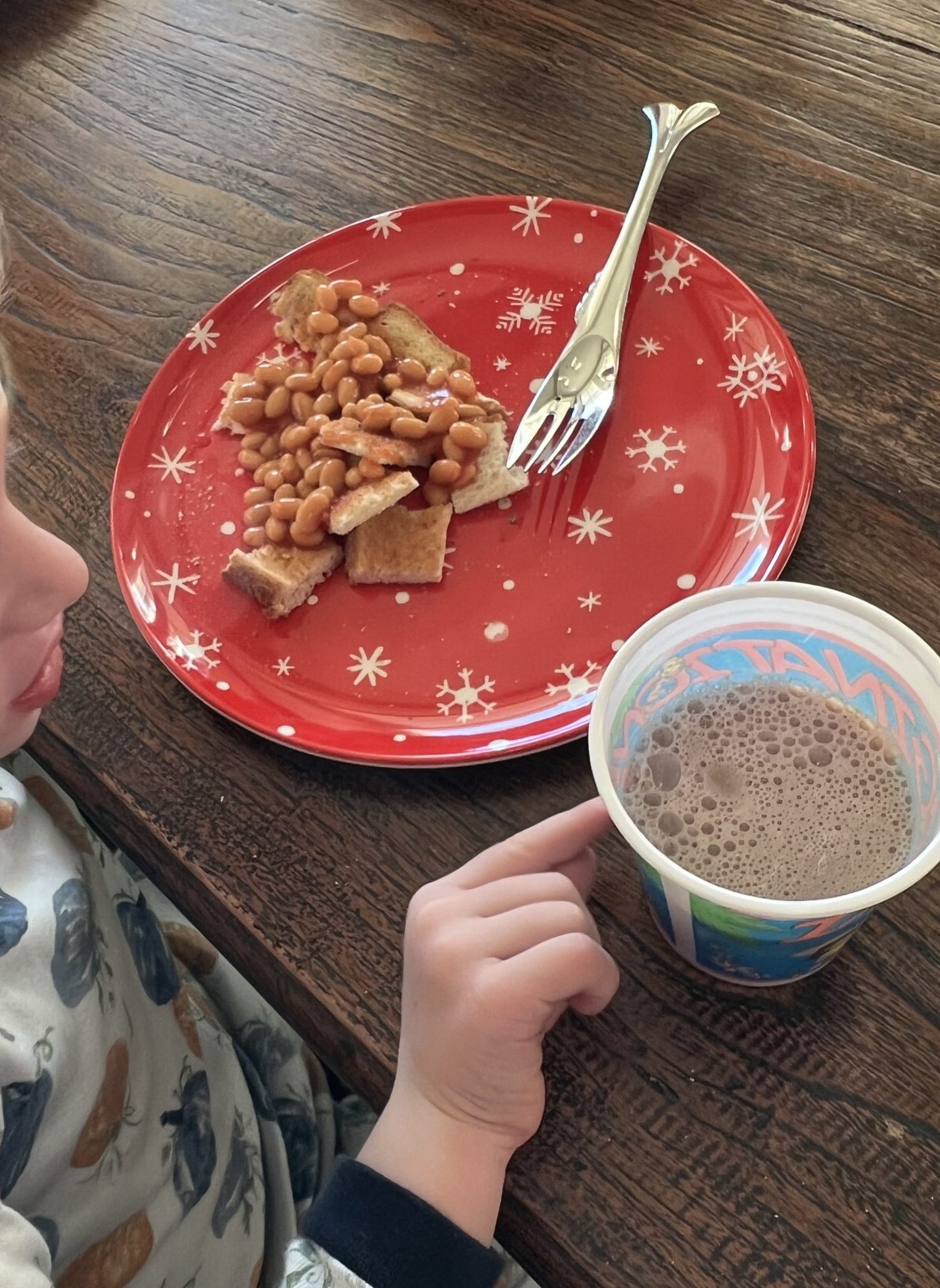 Sullivan tried to change the subject to the chocolate milk. 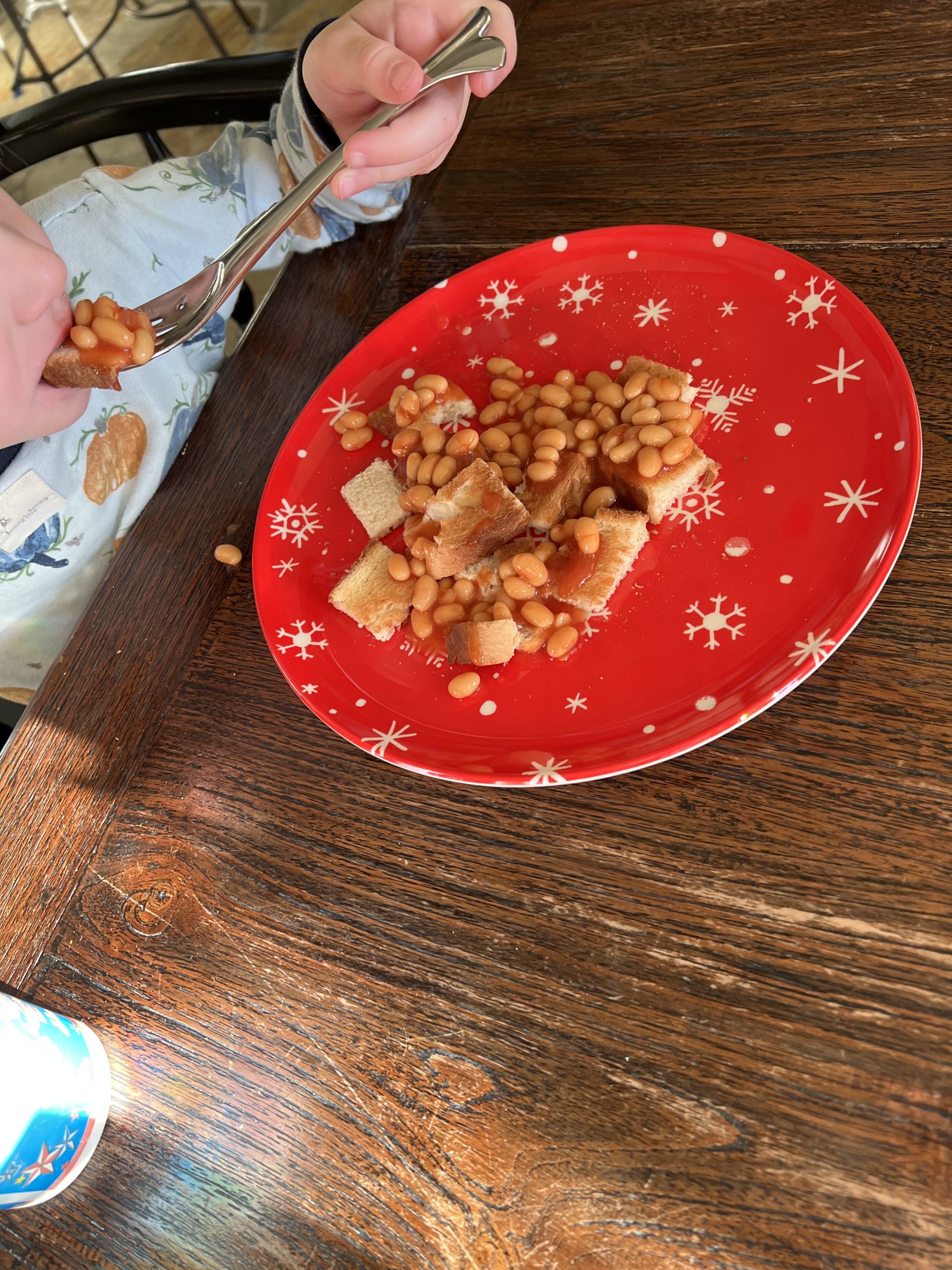 You gotta give Winston credit for at least giving the beans a chance. And, yes, his pajama top is on backwards. At least it’s right side out.

So, the big “take-away” of the experiment doesn’t exactly merit a drum roll. However, I do believe that if we had started earlier, say age two, we would have a different outcome. Also, had we served something sweet, there is just no telling what the results would be. Anyway, Christmas is looming large, so I will let this go at long last. It’s a good thing because it truly would be abusive to test a Japanese breakfast on the boys. I hereby pledge to never ever serve them nori. Unless they mess with the TV remotes again.